really? you don't want to save? I'm 480 off 1k babies! let me save these 32 into permanent existence
wickedjr89

"Oh come on! You can't afford to be picky! Everyone you like is either taken or a lesbian!" (Me to a bisexual Skye Weiss trying to hook him up before he dies of old age, at least I did manage to get him some elixir of life!)
My Simblr
They/He
LucieSims

From: "ANGELA! Why are you cheating on Dustin!?"

To: "What the heck happened to your wrist!?"

I make my sims do yoga a lot, and of course they fall down a lot. This is pretty much how I respond when they do.
OnayaW

"How do people do that?" I mumble to myself as I build houses and want to achieve something specific but just concludes I do not have the skills yet for such things-
I build small houses *^*
wickedjr89

Quote:
Ha, yeah. At least with some sims I like to pretend they're doing it on purpose as a joke.


---
Trying to fulfill wishes for an old sim late in their lifespan: "'Buy an expensive stereo'... Oh, I can buy this one, place it out here and sell it later. She won't even know - she'll be dead!"
I am Error.
AndrewGloria

Quote:
I'm sure mine are doing it deliberately! They prance around all day in the skimpiest of underwear, and then make out that they're shocked because someone has removed the last fragment of fabric to get into the shower or bath.
All Sims are beautiful -- even the ugly ones.
My Simblr ~~ My LJ
Sims' lives matter!
The Veronaville kids are alright.
Kligma

Scandalous!
I am Error.
AndrewGloria

"Oh Gerry! What do you make of your parents?"

Gerry McBain got off the school 'bus to see this: 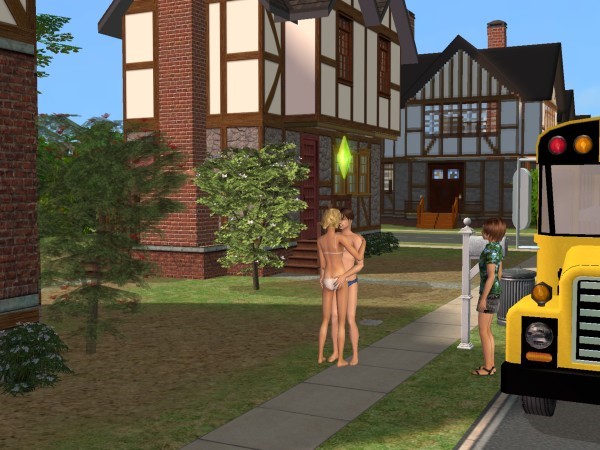 Mind you, I'm still impressed by the architecture. Veronaville today must be a wonderful place to grow up.

[EDIT]This is what his sister Glenda saw a couple of minutes later: 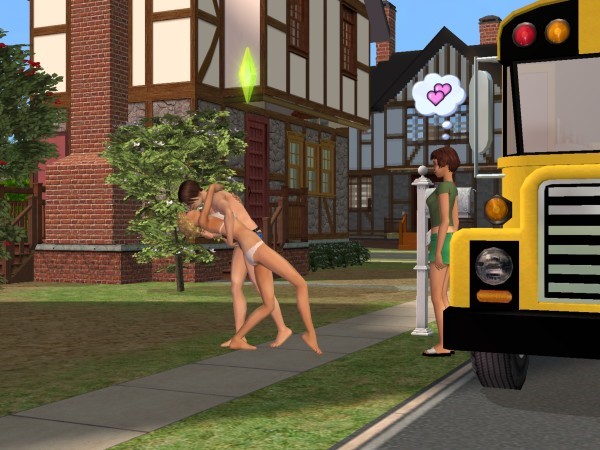 All Sims are beautiful -- even the ugly ones.
My Simblr ~~ My LJ
Sims' lives matter!
The Veronaville kids are alright.
Freefalldreams
Scholar
#3712

Chris Hatch made a mod for more intelligent reactions to nudity, with different reactions based on relation and attraction between the naked Sim and the viewer. It still allows shocked reactions, but also disgust, attraction, amusement, and occasionally what seems to be boredom. No idea where to find it now that BAS is gone, however... He kind of had to make it, given how much some of his other mods increase the frequency of nudity!

I got tired of playing retro-Strangetown (or scared to actually deal with the looming issue of the war and the draft) and decided to temporarily pull most of my retro defaults (some of them are good enough to stay!) and try a nice little cosy murder mystery since mystery hoods are so trendy now. Bayside Flats is so small that it should be calming to play and easy to solve, right? Er...

The first thing I said while playing Bayside Flats:
"What the <BLEEEP>?!? What's wrong with you, Detective Keller? Why do you want to make zombies? Who are these people? They're not the victims..."
It made somewhat more sense when I checked his family tree, and was even a little sweet. However, I'm very glad he rolled Supernatural Skeptic on the trait randomizer and thus has had no further interest in zombies.

"What are you... NO! STOP! Bad girl! Bad girl, Sarah!"
I'd never seen an urn get smashed in my game before, because I'm afraid enough of the consequences to make sure urnstones are in gravestone mode if they have to be on a lot with aspiration failure among the living occupants. Bayside Flats has multiple urns sitting unobtrusively in bedrooms and nearly the whole town is in aspiration failure or near it. Now there's a smashed one sitting on the bedroom floor, which I'm making myself put up with because I do have nounlinkondelete and a mod to prevent autonomous urn cleanup, and because I wasn't sure if it would safely turn to a gravestone if moved outside while smashed.

"That is the scariest Headmaster I've ever seen."
"Papergirls can wear makeup?"
"Are you an alien?"
Yes, Bayside Flats is made with truly clean templates. I am very impressed with the papergirls it has spawned, to the point of wanting to extract one for use in other hoods. Less so with the Headmasters.

"Shagging a suspect. As brilliant as the zombie idea."
"You have the right idea, but get out of the bedroom!"
It really seemed that the lingering welcome-wagon townie was trying to keep them apart.
"Oh, that was cold!"
I'd also never seen that obvious a one-night-stand: Cutscene ends, visitor is already out of bed and dressed, saying it's late while heading for the door. Detective Keller seemed quite shattered by the abandonment.

Chandler Platz had returned from his final exam and was waiting for girlfriend Pauline to get back from class before he moved back to the 'real world', when the coach turned up and started yelling at him to exercise.
AndrewGloria

Quote:
These remind me of a little Victorian(?) rhyme that I think I learned from my grandmother:

Little Will his mother smote.
Then he cut his father's throat.
As the blood still was spouting,
He cried, "Now I'll get to the Orphans' Outing!"

I've been meaning to PM you, and I'll do it soon, now that I've cleared out enough old PMs to be able to use the PM feature again.

Have you completely abandoned your old long-running dystopian megahood, or are you planning to go back to it again one day? Perhaps when real life has become a little less dystopian. I never really abandon my 'hoods. I intend to return to all of them in time.

Considering my reputation for never harming Sims, it may surprise people to hear that I often enjoyed reading of the happenings in your 'hood. But I never really objected to Sims dying unpleasantly in other people's games when it formed part of an interesting story. (It bothers me more when people seem to be killing Sims simply because they enjoy killing.) And of course don't anybody ever ask me to kill my Sims; my Sims' lives are sacred!

Anyway Freefalldreams, I hope you've been bearing up well during the present real world dystopia! I believe things may improve a bit soon. (Well, for those of us whom the Grim Reaper hasn't taken.)
All Sims are beautiful -- even the ugly ones.
My Simblr ~~ My LJ
Sims' lives matter!
The Veronaville kids are alright.
LyokoGirl5000
Lab Assistant
#3715

*Sees Joy at Nina and Lily's house with both home at the same time.*

"What are you doing here? Nina, tell her to leave! No, don't kiss her goodbye!"

"I wonder who they'd be more furious at, their spouse or their shared lover."
All's fair in love, war and video games! ~LyokoGirl5000
StrangeTownChick

In real life, this is when you form a throuple.
I've got one or two things on MTS, but most of my stuff is on my main site here:
http://simcessories.blogspot.com/
(Now recruiting budding creators.)
Peni Griffin

"There are other places to be besides this hall, you know."
As the entire Ottomas clan, including their cats and Dora's ghost, cluster at the top of the stairs where their two guests are getting on like a house afire. It took three hours to get the youngest downstairs to eat.
Ugly is in the heart of the beholder.
(My simblr isSim Media Res . Widespot,Widespot RFD: The Subhood, and Land Grant University are all available here. In case you care.)
HarVee

"Stooopid hills" - I said this about Pleasantview, even temporarily renamed it Stupidhillview out of frustration when trying to nhood decorate.
In this context, there's no disrespect ...We got five minutes for us to disconnect
Let's get retarded in here.

"Don't make me quit to neighborhood." (I had to quit to neighborhood. Stella was stuck drinking from her water glass instead of eating the dinner she'd ordered and nothing else would free her.)
Ugly is in the heart of the beholder.
(My simblr isSim Media Res . Widespot,Widespot RFD: The Subhood, and Land Grant University are all available here. In case you care.)
BlueAlien
Scholar
#3720

Zoe had made lunch, but every time I tried to click on a plate of food for Gunnar to go and eat, Zoe leaned forward, so I kept clicking on her head instead.
LauraBow

Why did I think it was a good idea to have the room adjacent to another apartment be the baby/toddler room where they keep getting woken up by a noisy neighbor?

"Stop doing that!!" and of course the Sim keeps doing whatever stupid thing they are doing.
Peni Griffin

"Are we crashing, or is this a problem with my monitor?"
Ugly is in the heart of the beholder.
(My simblr isSim Media Res . Widespot,Widespot RFD: The Subhood, and Land Grant University are all available here. In case you care.)
Charmful

The lady was waiting for someone to serve the hot dogs all while the clock was counting down and she had a want to have a dream date.
Uh oh! My social bar is low - that's why I posted today.
My SIMBLER | SIM WHIM | SIM VIDS | SIMS 2 STORIES | SIM PICTURE-TAKING TIPS | MY HOOD | SIMSTAGRAM | TWITTER | TWITCH
Annaminna

20th century:
"You have nothing better to do? Go and learn Fire Safety!"
Back to top