The Lost Continent (1968) - 4/10 (Not to be confused with a couple of movies entitled Lost Continent, from the 1950's)
It starts out promisingly enough, with a leaky old steamer carrying illegal cargo to Caracas, Venezuela, I forget from where, along with an odd collection of passengers. After encountering a hurricane they end up stuck in the doldrums in the Sargasso Sea (I had to look that up) where they encounter man-eating seaweed, giant carnivorous crustaceans, and the descendants of conquistadors who have been trapped in the doldrums for centuries. It sounds more interesting than it is.
Who says weed wasn't potent back in the 60's? And I don't mean seaweed.

Quest for Fire (1981) - 10/10
In the prehistoric world, a Cro-Magnon tribe's survival depends on maintaining their source of fire, which eventually extinguishes. Lacking the knowledge to start a new fire, the tribe sends three warriors on a quest for more. Good cinematography, good drama and good humor.
Unique in that there is not a single spoken word in the entire movie, just grunts and gestures.
One of my favorite movies.
My Lot creations: https://simfileshare.net/folder/150474/
ScaryRob

Another old movie that I never sat down and watched properly, until last night.

Steve McQueen plays San Francisco police Lieutenant Bullitt, who is charged with protecting a mob fugitive over the weekend until he can testify in court the following Monday.
About a half-dozen other notable actors play their typical roles, including Robert Vaughn as Senator Chalmers, Don Gordon as detective Delgetti, Simon Oakland as Captain Bennet, and even Norman Fell (the landlord from Three's Company) as Baker, another police superior. Jacqueline Bisset plays Bullitt's significant other and Robert Duvall plays a cabdriver.

Noted for it's supposedly epic car chase between two 1960's muscle cars through the streets and nearby highways of San Francisco, I don't see much else extraordinary about this film. Although the general story isn't too hard to follow, there are irritating details that left me wondering whether they are, or are not, significant. Even after reading the plot description on Wikipedia afterwards, the overall story still seemed sketchy to me. It seems the entire movie was built around the car chase.

(Spoiler alert)
For example:
* Senator Chalmer's suspected link to organized crime (according to Wikipedia) is never elucidated. Is he a good guy or bad guy? If he's bad, how bad?
* Why in fact did Ross unlock the door of the hotel room?
* Would leaving the door locked have made much of a difference, considering the perpetrators subsequently entered the room and shot two people with a shotgun? They obviously weren't concerned about making noise, so would a simple locked door chain have made much difference to them?
* Jacqueline Bisset's role as Lieutenant Bullitt's girlfriend/fiancee is of no importance to the film. Using her to try to "humanize" Bullitt is pointless. The only reason she's in the movie is because they wanted to include a beautiful woman, or any woman, in the film, but leaving out her role entirely would have made no difference whatsoever. She's just window dressing in an otherwise all-male cast.
My Lot creations: https://simfileshare.net/folder/150474/
ScaryRob

In the Mouth of Madness (1994) - 5/10
Some kind of Lovecraftian-type tale that gets weirder and weirder.
My Lot creations: https://simfileshare.net/folder/150474/
ScaryRob

To Live and Die in L.A. (1985) - 5/10
Too complicated with too many similar characters intertwined. Had to read the plot description on Wikipedia after watching it. Real life is not that complicated.
My Lot creations: https://simfileshare.net/folder/150474/
andes
Field Researcher
#685

Couldn't stop laughing - shut my eyes for all the bloody bits. Second time seeing it, which is always the better one when it comes to movies, being accepting and unconcerned about quality.
Binara
Test Subject
#686

Decent story, but apart from the second teen who gets kidnapped, nobody in that movie has an inch of basic survival instinct and/or survival 101 skills. The 911 operator sounds like she knows what she's talking about when on the phone (after she gets a second go, that is), but when she's in the field she's almost as bad as the rest of 'em... Even the police is blundering around a bit, always 3 steps behind. Also, that ending... That's just begging for future trouble

Southern Comfort (1981) - 3/10
The first hour or so is a cliche cringefest and, frankly, boring. The last half hour is okay.
Edit: Actually, I'm going to lower my ratings by 2 whole points because after further thought, this entire movie is garbage.
My Lot creations: https://simfileshare.net/folder/150474/
ScaryRob

City of Fear (1959) - 4/10
A vicious killer escapes from San Quentin, heading to Los Angeles, with a canister of what he believes to be heroin but is actually a radioactive substance that is dangerous enough to kill everyone in the city. What he does not know is that exposure to the element is slowly killing him, as the authorities try to locate him and the canister.

Sounds like an interesting plot, but this movie just plods along, boringly.
My Lot creations: https://simfileshare.net/folder/150474/
ScaryRob

Brainstorm (1965) - 3/10
Scientist Jim Grayam saves his boss' wife from suicide but falls in-love with her and plots to kill her husband by pretending to be criminally insane.
Goofy, boring, dumb.
My Lot creations: https://simfileshare.net/folder/150474/
ScaryRob

Deadline (1980) - 2/10
A popular horror writer whose family life is falling apart struggles to write his next horror movie.
Never heard of it? That's because it's effing stupid.
My Lot creations: https://simfileshare.net/folder/150474/
love444eva
Test Subject
#692

A Haunting in Connecticut (2002) - 5/10
Apparently this is a TV movie and should not be confused with The Haunting in Connecticut (2009), a motion picture, although they both tell the same story of a family that moves into a Connecticut home that is, well, haunted, obviously.
For a TV movie this isn't too bad. It is filmed in the style of a documentary, with a narration that explains the events, along with the acting. It's got me curious to see the motion picture version.
My Lot creations: https://simfileshare.net/folder/150474/
ScaryRob

I was wondering whether someone could help me remember the title of a movie I saw about 10 years ago. It was Sci-Fi/Horror and dealt with a creeping darkness that gradually envelopes the entire earth. I don't remember for sure, but I guess this darkness kills anyone caught in it. It wasn't a particularly good movie, kind of dumb actually, but I can't for the life of me remember what it was called. It was probably one of those movies that was released only on DVD, never in theaters.
Anyone have any idea?
My Lot creations: https://simfileshare.net/folder/150474/
ScaryRob

The Haunting in Connecticut (2009) - 5/10
Not to be confused with A Haunting in Connecticut (2002), from two posts above, this motion picture version is gorier, but not overall better. I think the TV version might be a bit more suspenseful, and not just because I knew what to expect with this one. I think it's because what the TV version has in suspense, the movie version has in gore, because they probably can't show as much of the latter on TV. I give this one the same rating.
My Lot creations: https://simfileshare.net/folder/150474/
Gnasher316

Boring, Has been done many times before with much better results.
I am a Bruce Willis fan, But in this he does nothing but walk through some woods on an island with a few crazy people who are out to kill him for sport.
They kill themselves while Bruce is getting high on berries he found and that's about it.
andes
Field Researcher
#698

"- Just because I don't have a boyfriend does not mean I'm gay!
- I'm just saying, you already live together, you might want to consider it.
- I'm not sure it's something you can actually consider, Shoz. I think it's more like something you're born with, like, a genetic mutation, like X-men, but, like, in vaginas.
Like, boom (forming an X with arms), Vulvarine!"

Moon (2009)
9/10
This movie was amazing. Sam Rockwell really plays the main character well (or should I say characters without spoiling too much)
It was truly a hidden gem for me as I didn't expect much of it as it was a movie made with just 5 million dollars.
ScaryRob

Something Wicked This Way Comes (1983) - 1/10
In a small American town, a diabolical circus and its demonic proprietor prey on the townsfolk.

Something stupid this way comes. The premise of this "Mystery Thriller" never grabbed me, which is why I never watched it until now - and I really had to force myself to see it through, over the course of three evenings. Ughh. Just goes to show how bored I am sometimes.
It's set in the 1920's, an era I find decidedly uninteresting. The fashions are ugly, the technology is ugly - cars, telephones, radios, etc. - and American small town society still has many of the trappings of the late 19th century, with gas-lit streetlights and some homes still using candle power. After all, this was just 50 years after cowboys on horseback still rode through most towns in the Midwest and West. Just an ugly era, in my opinion, in many different ways.
Another thing that irritates me is that this is one of the countless movies of the 1980's that had child characters that were smarter than the adults, which is why I've never watched E.T., The Goonies, Poltergeist or similar Spielberg garbage. In this movie, this is exacerbated by the Jason Robards character, a septuagenarian, or nearly so, who is the father of a 10-year-old boy. Now, just doing the simple math means that the father character was around 60 years old when the boy was born, presumably to a woman of child-bearing age, so no more that 40 at most. That's a 20-year age difference between husband and wife, if not more if she was younger. In order to make the plot work, they needed an old man with a very young son, but the somewhat weirdness of it really irritates me.
Then there's Jason Robards, one of the most overrated actors, in my opinion. Every movie I've ever seen him in he plays the same, plodding, monotoned, excruciatingly boring characters. I'm really starting to despise this guy.
Robards is similar to Jack Klugman in this regard, who, no matter what type of character he played, always came out as Oscar Effing Madison, from the Odd Couple TV show - very irritating to see. Even before The Odd Couple, he exuded Oscar Madison when he was in a few Twilight Zone episodes, always reverting to the same obnoxious demeanor and mannerisms. Maybe Klugman's excuse was that he had a face like a chewed piece of bubble gum, so he was never suited to play a leading role opposite a beautiful woman, or any woman really. I can't think of a single example of him kissing a woman on screen. The mere thought is cringe-inducing and at once laughable. Even in real life he was married to a hag, although she at least had a pleasant personality and sense of humor. Oh well, tough luck on him and I'm digressing anyway.
Anyway, this movie sucks. 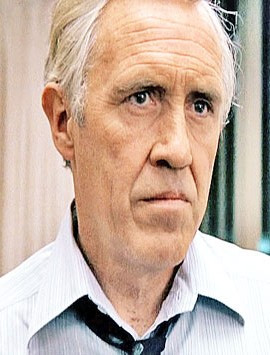 Why always the long effing face?
He'd probably make a good match
for Sarah Jessica Parker.
My Lot creations: https://simfileshare.net/folder/150474/
Back to top