Quote:
Isn't he saying: 'but I learned so much.'
I no longer come over to MTS very often but if you would like to ask me a question then you can find me on tumblr or my own site tflc. TFLC has an archive of all my CC downloads.
I'm here on tumblr and my site, tflc
AndrewGloria

Quote:
What about Bella? They didn't bring her back! At least not properly. They dumped her in Strangetown with no memory of who she was or where she came from. Livva is quite right. Merlin was being irresponsible!
All Sims are beautiful -- even the ugly ones.
My Simblr ~~ My LJ
Sims' lives matter!
The Veronaville kids are alright.
kpcca2010
Lab Assistant
#553

Mary Sue Pleasant shows off the cute little impersonation she can do of servos to Prototype Alpha, Daniel's creation (who was, incidentally, activated by him. So imagine a female robotic version of Daniel Pleasant running around the neighborhood)

Florine Lindstrom. Mother of Marit and Don Lindstrom. She felt fine about growing up. The look on her face must be the memory of Benjamin de Lange's visit.
(You can read about that here ) 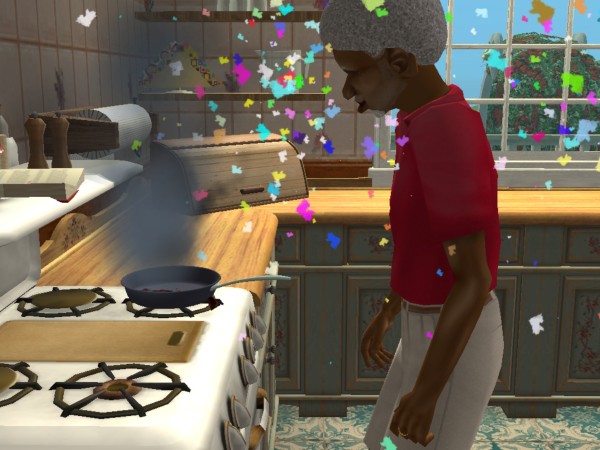 Cooper Hawkins was cooking for his daughter's wedding when he aged to elder. There wasn't time for a birthday party and a wedding, and as far as he was concerned, the wedding took precedence. Hmm, perhaps they should put out some fruit salad... 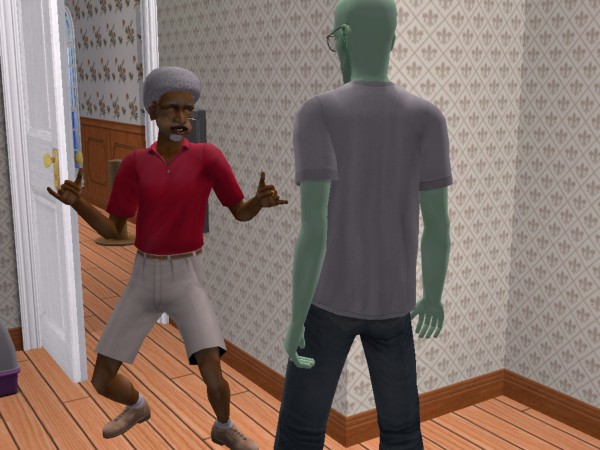 He welcomes his son-in-law to the family with open arms! 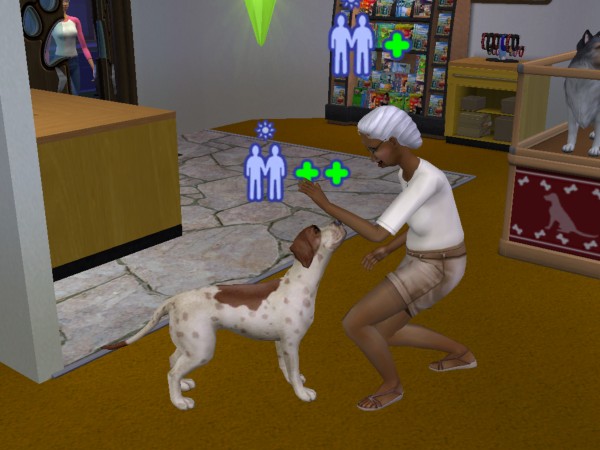 Kitty Hawkins was missing having a dog around, so she went down to the pet shelter, where she met a dog who is the spitting image of their old dog Lady! 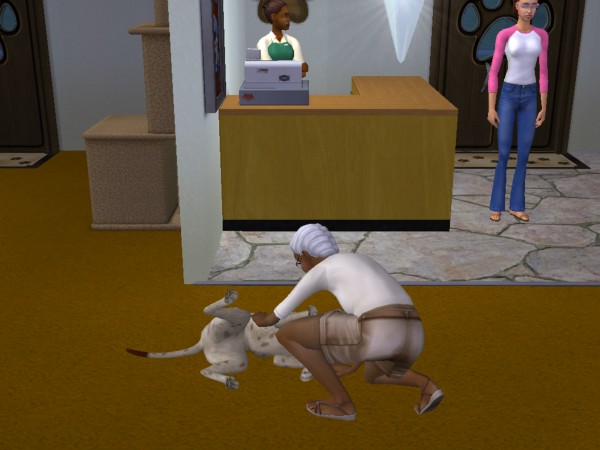 Kitty names her Ladylove. She'll fill that dog-shaped hole in the family!
Ugly is in the heart of the beholder.
(My simblr isSim Media Res . Widespot,Widespot RFD: The Subhood, and Land Grant University are all available here. In case you care.)
Training_Cookie
Lab Assistant
DELETED POST
15th Jun 2015 at 10:11 PM

This message has been deleted by Training_Cookie.
whoward69
Instructor
DELETED POST
28th Jun 2015 at 9:27 AM

This message has been deleted by whoward69.
Essa RIP Caïn Granville-Carver
Romance - Died aged 78
Didn't have time for a last woohoo but was in a platinum mood.
He's leaving behind his twin brother, three nieces (Alberta above is one of them), one nephew and two lovers. Now that Donavin has reached his LTW, I figured it would be time to say goodbye. So after throwing one last (and might I add rockin') house party with all his friends and family, this old man was ready to go to the other side to be reunited with the love of his life that he'd lost so very long ago.

His girlfriends (with an 's') Caryl and Arianna did not take his death very well. They made more of a commotion than the dogs!

Caryl just can't seem to cope with the loss these days.

Arianna finds a distraction in fixing up Donavin's junk car. After all that time, he had never done anything with it ( And why he bought it in the first place was beyond her ) but maybe she could make it work. Just a day after his death, she aged up to an elder as well. Erin Singles just passed away, leaving behind her husband Addison and son Jarven.

They were all torn apart by her death. They cried the rest of the day RIP Naïka London née Campelle
She died of old age at 69 in platinum aspiration (LTW) soon after throwing a family party.
Mother of twin daughters (Nabila and Malika) and a adopted son (Felipe) and grandmother of six (Lina, Malik, Medhi, Gabriel, Noé and Nico), she spent most of her life in red aspiration (she was depressive and tried to commit suicide twice) hence the fact she died so young. My elder usually pass away in their 70-80.
She worked as an employee at the local flower business (Paradis floral) and was doing great.
venusking 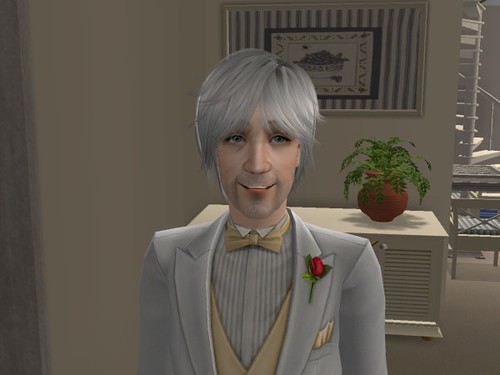 Ripp Grunt died Thursday evening of old age. Ripp is the son of the late Lyla and General Buzz Grunt. He is survived by his wife: Ophelia Nigmos Grunt, children: Rania Kosmokos, Ranu, Lance, Lane, and Helium Grunt, grandchildren: Reese and Ryan Kosmokos, siblings: Tank, Buck, Jade, Rose, Brooke, and Wade Grunt, nephews/nieces: Thorne, Chase, Grant, Dawn, Skip, Tripp, Bayleigh, and Brett Grunt. Ripp was a well-known professional party guess and an active member of the Strangetown Association for the Acceptance of Alien Hybrids (SAAAH). Ripp and his brothers Tank and Buck were raised by General Buzz Grunt after the demise of their mother Lyla. Buzz is best known for his books on alien conspiracy theories. Ripp left home as a teen after getting pregnant as a result of alien abduction. He was taken in by Olive Specter and her niece Ophelia Nigmos. After Olive's death, Ripp and Ophelia married and sold the family home to Olive's son Neville Specter (aka Nervous). They raised his alien hybrid twins Ranu and Rania as well as having two sons together, Lance and Lane. Late in life, Ripp was abducted again and had son Helium. He founded the SAAAH as a young man and was an active board member right up to the day of his death. His organization is credited with obtaining equal rights under the law for all alien hybrids. Additionally, he instituted the Ripp Grunt Education Trust (RGET) which provides scholarships to alien abductees and their heirs. His tireless work on behalf of alien hybrids is commemorated in the bestselling autobiographical novel My Two Fathers by daughter Rania Grunt Kosmokos. The funeral will be held Saturday at 1:00pm at the Underwood Funeral Home. Interment will follow at the Underwood Simetary. The family has requested that donations be made to SAAAH or RGET in lieu of flowers.
Duvelina Mary-Sue and Daniel Pleasant are still happily together. He never left her for Kaylynn, so Kaylynn got tired of waiting and only cleans the house now. Daniel never had another affair, neither did Mary-Sue. Honestly, they're one of the only sims in Pleasantview right now who never (again) sought the love of another. Don Goth trying to fit into his new family, but Mortimer didn't have any of it. He's been deceased for 2 in-game weeks now, which is basically fourteen years.
http://charliethesimmer.tumblr.com/
Bigsimsfan12

Catherine (Viego? I can't remember) sadly passed away this rotation while cooking dinner. Her adopted son Simon had to quickly run over and move the pan before it burst into flames. The teen stood next to her is Linda-Ellena Martin-Goldstein, the daughter of Andrew Martin and the late Betty Goldstein.

Denise Jaquet passed away, just after woohooing her boyfriend Matthew Smith for the first time.... on the stairs. Matthew doesn't look too impressed.

Devon Anderson has developed a new hobby in chess, though apparently playing against yourself is quite tricky.

Daughter Freya soon comes along to have a game with her, though.

There were a lot of deaths these past few rounds.

I was especially sad about Franklin dying because he was helping his son raise triplets. Now I have only two sims for three toddlers >.<
egswanso

The executive branch of my Hood, all occupied by elders:

Little Dawid is surely the best gift his grandparents - mayor of Nieznanowo, Błażej, and his wife, Marlena - could have gotten after a sudden death of their son, who was to replace his father in ruling the town and continue family's tradition. 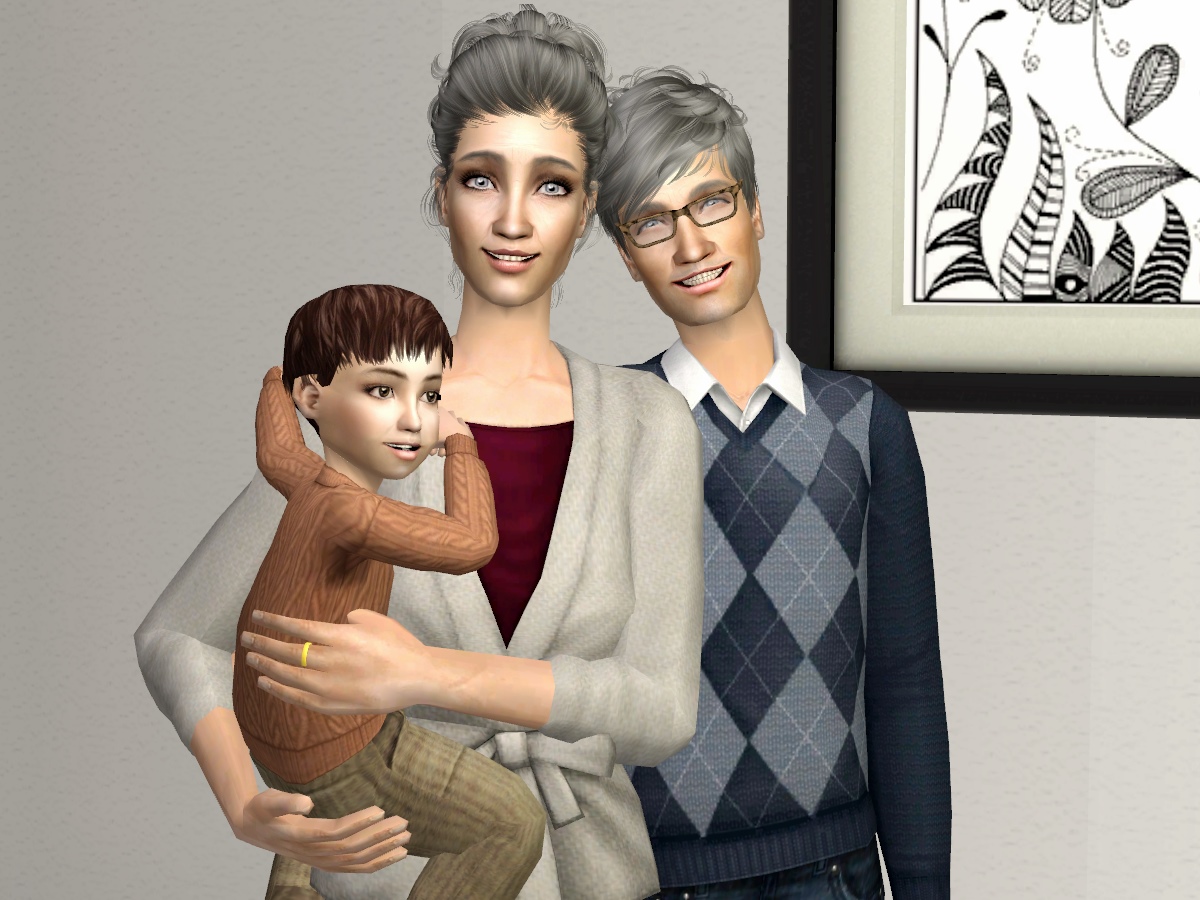 Everyone is growing old in the Anderson family! Here's Choji down on the family's private beach, watching the waves:

Rei came over for a visit and thoroughly enjoyed herself dancing:

While Virgil just continues to amuse me: Jillian and Peirce Cosgrove have just entered their silver years. While they haven't gone grey yet, they've gotten their fair share of wrinkles and achy joints. Here we see them studying together. Being both knowledge sims, they spent their day off reading how-to books. They've learned to love each other and live in comfortable silences between each other while they study. Natacha Morand
Granville's current mayor for a last term since she'll be 70 years old at the end of the round.
Since the town has funds, she wants to renovate/beautifying the community lots and add a real teen hangout. Cordélia Granville-Carver
She's devoting her life to her family. She's currently a widow and has 6 children (5 of them are married) and 10 grandchildren. When her youngest son will be married, she'll be the happiest mother in the simworld.
Back to top