I am not sure what to do with them yet. I think that Jodie will open a club. That's what their bios are hinting, and Jason looks like a bartener material. Or I could just let them open a hairdresser salon. :cylon:

It also seems that both of them are going to have a fling with Malcolm.
Will have to see how it turns out... :>
JayKenz She scared her twice in one night, ignoring everyone else in the house! Perhaps she was just trying to make sure that if Hermia had gotten pregnant, she wouldn't stay that way... Monica Bratford got a streaker to come help her and Sarah Love with the consummation of their wild attraction for each other.
jayevonne

If you leave me now…
Freefalldreams
Scholar
#81 "Wanna light the next candle, Jules?"

(Obviously, because of the length of Sim-seasons, multiple candles have to be lit per night.)
jayevonne

In my game`s Top Star:Stephen Tinker

Alluring? Yes she is. This first picture is my favorite.

Dina has a surprising amount of looks that she can pull off.

Thanks for viewing.
Tasia.
Freefalldreams
Scholar
#85

Dina looks beautiful, Tasia, but one of your pictures is missing. I'd like to see all of them, if you could fix it. The real Bella Goth, still a townie as yet...look at how bewildered she looks. She spent nearly a Sim-hour doing that befuddled wander-around when she showed up as as customer at J'Adore Bakery!
Soapsim1

For my current Strangetown I really tried to stay true to the vanilla appearance of the characters. I think I've succeeded quite nicely and love how they all look.

Tank Grunt and Stella Terrano (since aliens already have green skin and black eyes, I figured there was little reason for them to be limited to the regular four hair colors. I kept Chloe and Lola red and black, because they already appear that way in the storytelling pictures, but Stella is a clean slate and gets funky hair, as do all the half-aliens born in game)

Ajay Loner. I really love this guy. He looks great!

Erin Beaker... now Loner, with her husband Ajay on their honeymoon.

One of my photo-taking sessions for a project (making family photos for premade Sims) went horribly wrong.

Who got squished by the satellite? Here's a hint: Look at the boy's hairstyle and facial profile.

Yes, that would be Jodie Larson as a child under the satellite.

I swear, I just plunked her down for all of twenty seconds. This is the first time I've ever had a random satellite death, and of course it's gotta be a child while I'm doing a photoshoot. Because Grim's kind of a sick guy.

Poor Jason happened to be right next to her, also watching clouds. If there's one thing a Sim needs to prepare himself for a life of ladderless pools and cowplants, it's childhood trauma.

So now I've got the whole family freaking out, while just off-screen a stereo plays an inappropriately cheery salsa tune.

To be fair, maybe I shouldn't have had the twins lying in the road while they stared up at the sky.

Thankfully, despite having less than a 50-50 shot at success Alvin wins Jodie's soul back. While this isn't a good example photo, Alvin's face is...interesting, I guess you can say. His brows are quite high on his head.

In the end I got my cute twin photo, and it didn't involve any cloud-watching whatsoever. I guess the moral of the story is, don't let your kids play in the street, or else a satellite from space will suddenly drop in like a homing missile.
Freefalldreams
Scholar
#88 This is probably the best PlantSim birthday ever...and yes, Rose is wearing a shirt, and yes, she's wearing Maxis maternity clothes. She changed into them when she got out of the shower in a hurry to give Jason an end-of-date kiss, and I left them on for the cake photos because they look so cute with her colouring. Daisy blows out her candles, to her mother's delight. She's wearing makeup and a pretty dress for the occasion. This is Daisy as an adult, apparently. Oh well, not too bad...actually, she's kind of adorable. Rose looks so proud. "Ugh, Dad plays that so badly!"
"Dear, he listened to you on the xylophone the whole time you were little. Give him a break and let him get better at it."
"But he just doesn't play well!"
"He's only human, dear."
Soapsim1

I see that Ajay's photo in my previous post has been deleted.... Really, imageshack? A guy in a hottub wearing a swimwear is too offensive? *sigh*

Pascal Curious during a failed attempt to steal the Beaker's newspaper or kick their trash can:

Loki Beaker and his daughter:

Heh, they'd probably have removed the last picture of Rose and Daisy then, considering how skimpily Rose is dressed and the rather voluptuous figure she's gained thanks to my replacement preg mesh... "So, I'm glad you and Ophelia finally had your first time. That means you'll be getting married and giving me grandbabies before Chloe, right?"
Johnny smiled weakly and Chloe left the table in embarrassment. PT#9 had never bothered to learn what subtlety was about. This is Ripp Grunt's punishment for being smelly! Oh dear. Can you see how fake that cheer is? That's more like the real state of things in the house...except that Buck should be crying. Oh well, his nose isn't as bad as I remembered...though it's when he has daughters that it gets really obtrusive.
JayKenz Another picture of Tank. I really have developed a soft spot for the guy. He tries to look tough but inside he's a sweetheart.

And her sister Chloe:

If you leave me now…
Freefalldreams
Scholar
#94 Aww, perfect smustle synch! I am so shipping Benedick and "Lucy from the block"! Beatrice, wearing makeup for her birthday, pensively says goodbye to childhood.
Lucy: "Oi, Benny, stop dancing like a moron. You've got to grow up next!"
(Yes, living in downtown SimCity has gotten them the nicknames Benny and Bee.) Benedick might look better if he opened his eyes!
jayevonne

If you leave me now…
Freefalldreams
Scholar
#97

*cough* Well, some of us follow the rules as regards posting... *cough*
Here's what goes on at Cold Issue Clothing when the teens rule the night! Tybalt's voice was cold. "Excuse me, you pair of trollops, but I think it is time we retire around the back. One of you needs...a word in private."
Mercutio laughed, refusing to release Hermia's hands. "Only one word with one of us? One alone is lonely, as Hermia and I know, so I'd advise you couple it with something. Make it a word and a blow." The resulting scuffle led to Circe Beaker getting a delightful show, and the salesgirl protesting futilely. "Hey, talk this through, or depart at once! Everyone can see you here!"
Hermia enjoyed watching boys fighting over her honour, so she didn't react much. Though his mouth was starting to ooze blood, Mercutio's voice was triumphant as he knocked Tybalt to the floor. "Eyes were made to look -- let them gaze. I will not budge for no man's pleasure...or woman's, for that matter." After all, the entire audience was female at this point. Insult was added to injury for Tybalt. Circe pointed out, with mock-concern, that perhaps he should work out a bit more, while Hermia treated Mercutio like some kind of conquering hero. He distinctly heard her say, "What a man you are!" as Mercutio leaned on her shoulder to catch his breath. They only thing that kept another fight from happening was Tybalt's belated remembrance that he had only just gotten out of jail for his last series of brawls...good thing he looked like the victim this time!

((Yes, most of the dialogue is a modernizing of lines immediately preceding the fight in which Mercutio is killed in the play. I'm not sure if this Mercutio will die or not, but I could see no better time to use them. And if you noticed Hermia's line is almost one of the Nurse's lines from earlier...yes, Hermia partially plays the role of the Nurse. She's shaping up as a bawdy live-in confidante to the idealistic Juliette, which sounds about right.))
Please support the Sim National Labs Folding@Home team!
Stuff I've made!
Aegagropilon

Sarah Love tells her daughter Dinazade to get ready for bed, then goes back to scrubbing down the kitchen in her bridal get-up.

While she's going to be too old for bedtime stories someday, Dinazade enjoys them now. She's not so sure about her sorta-stepdad Matthew Hart's storytelling abilities, though: she's heard this story before and she doesn't remember "braaaaiiiiinssss" featuring so prominently in it then.

The Goodies Still In Love After All These Years
In homage to my favorite pre-made couple, the goodies. In sim years - real life years since they debuted, I'm sure that they have been a couple for 60 years or so. 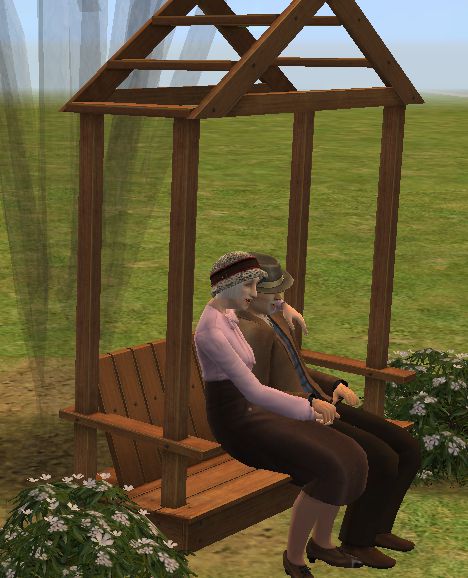 While Juliette gets along -- mostly -- with both of her siblings, Hermia and Tybalt would each be happy if the other found a rock to die under. Regan blames Caliban for their behavior.

My Simblr
Back to top