I created a playground and used visitor controller to only allow children and teens (tried to put some stuff for teens to do too), and then I sent Ripp and Buck Grunt to test it out. No other teens have shown up yet but we've got Sally Riley, Bottom Summerdream, Tessa Ramirez, and Sharla Ottomas on the spinny thing, and Marsha Bruenig and Jill Smith over by the vending machines. If Buck was looking for a future gal today'd be a great day!

Superwolf
Previously I've made child Sims from my pre-mades for the sake of testing lots and housing, but I've never made a child Sim in the sense of making one worthy of uploading before. Rambling over, here's something I started a couple days ago... I thought I'd post a picture of some of the children in my game, as I haven't done that in a while. This is Priscilla Goth, daughter of Alexander and Stella Goth (Terrano), when she was a child. She's a teenager at present. Priscilla is pretty laid back and is relatively playful in nature. She is friendly and outspoken, and doesn't exactly take the whole 'Goth' aesthetic seriously, preferring to wear pink and other bright colours. When she's older, she just wants to go and do her own thing, making many different friends in the process. She doesn't care about getting a successful career too much, she just wants to make friends. This is Elizabeth Goth, Priscilla's younger twin sister. She is a teenager at present. Unlike her older sister, Elizabeth, or 'Lizzy' as some call her, is more serious and often gets told that she thinks too much. She's kind and soft spoken, wanting to do all that she can to make her family proud and be worthy of the 'Goth' name (even though her father and mother tell her that it isn't necessary). Lizzy actually loves the 'Goth' aesthetic, preferring to wear blacks and reds, her favourite colour in general being red. She wants to pursue knowledge like her father and grandfather, aiming to make a breakthrough in science and in the mysterious disappearance of her grandmother. Her parents are worried that she's focusing too much on pleasing others and not herself. Marine Oldie, the middle child of Tiffany and Tank Oldie (Grunt). The picture was taken this round, I think, so she is still a child. In this picture, she's giving her Uncle Ripp a family kiss. He and Tank still don't get on, so it was Tiffany who invited him over... Marine loves the colour blue and unlike her older sister, gets on with her dad. Lily Nigmos, the eldest daughter of Ophelia and Skipp Nigmos (Broke). Looking at her, you wouldn't believe she was Ophelia's biological daughter, but she is. I think she has the S2 skintone, which is halfway between Skipp's S1 and Ophelia's S4. Lily is quite sloppy, but she's friendly. She likes to wear sunny colours.
When a game is predictable, it's boring.
That goes for any medium that isn't life.
That's why The Sims 2 is my favourite sims game.
It has elements of unpredictability and everything feels more involved.
The Sims 4 is another story altogether...
lfria 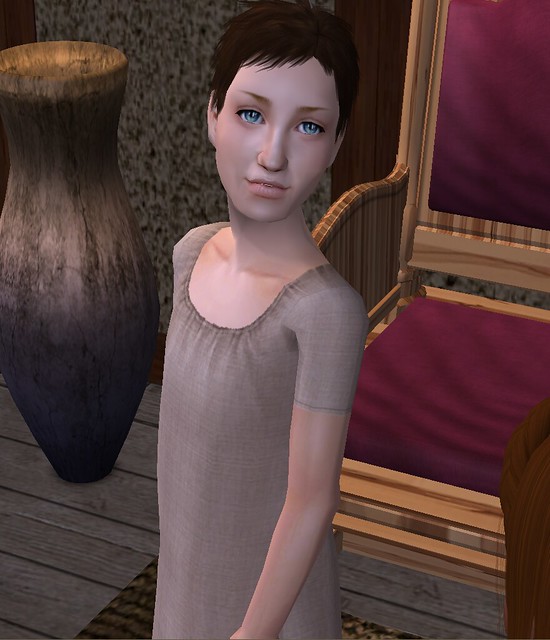 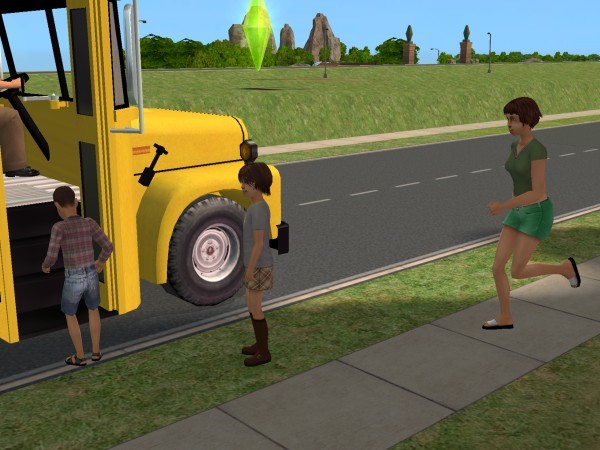 Even in the best organised of families, getting all the children off to school in the morning can get chaotic, especially when it's their very first day at school. Today the McBain twins Peni Jo and Peregrine started school, and they struggled to finish their cereal. In the end they had to run for the school 'bus, and so did their teenage sister Glenda. In the picture Peregrine is getting on, Peni Jo is waiting to join him, and Glenda is running to catch up. 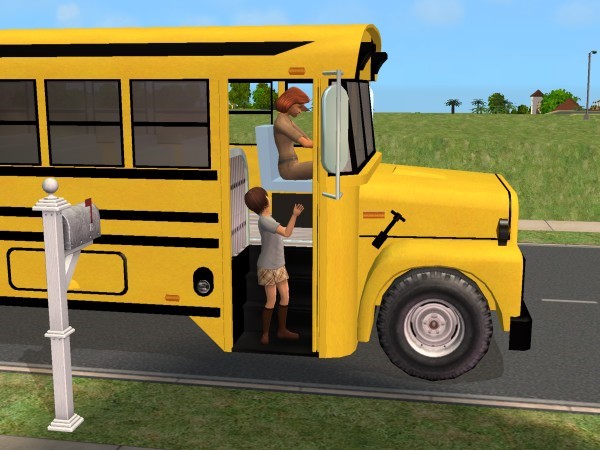 Just after three o'clock they returned from school. Ever polite and considerate, Peni Jo turned round to thank the driver as she got off. Both she and Peregrine had homework, which I thought was a little mean on their very first day. It was some consolation that their mum, Jenny, helped them both with it. 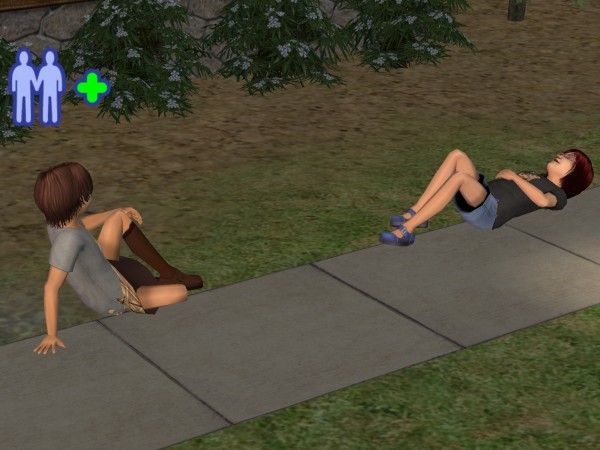 Peni Jo brought a cute little townie girl called Kayleigh Laing home from school with her and the two of them hung out together in front of the house. Later Glenda and her school-friend Freddie Oates joined them. 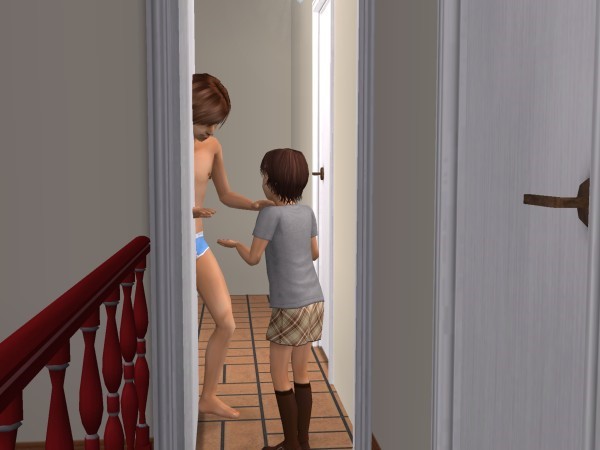 Peni Jo enjoyed her first school day, but her older brother Gerry got really fed up and miserable. I don't think school was the problem, it was more his part-time job at Goneril's bookshop in Bluewater. He's not interested in the job in the least. (He's also no good at it. When I last saw him in the shop he was supposed to be on the till, but, when a customer came to pay for the book they'd bought, he hadn't a clue what to do, and Miranda or Goneril had to take over from him. Goneril doesn't know what she's paying him for -- truth is he only got the job because he's Miranda's boyfriend. I can't help feeling that it would be best for everyone if he gave the job up.)

Anyway when she came upstairs about midnight to go bed, Peni Jo found him absolutely miserable just getting out of the bath. Peni Jo cheered him up by playing red hands with him, thus showing what a good little sister she is. She really is a credit to her parents and everyone else involved in her care. Maybe that includes her two Godmothers.

I'm sorry I didn't get a picture of Jenny helping her learn to study. And I regret that, although she's the central figure in all four pictures in this post, she's not facing the camera in any of them. I think I took and posted a better picture of her on her birthday, back in October. I'll try to get some more good pictures of her soon.
All Sims are beautiful -- even the ugly ones.
My Simblr ~~ My LJ
Sims' lives matter!
The Veronaville kids are alright.
Peace 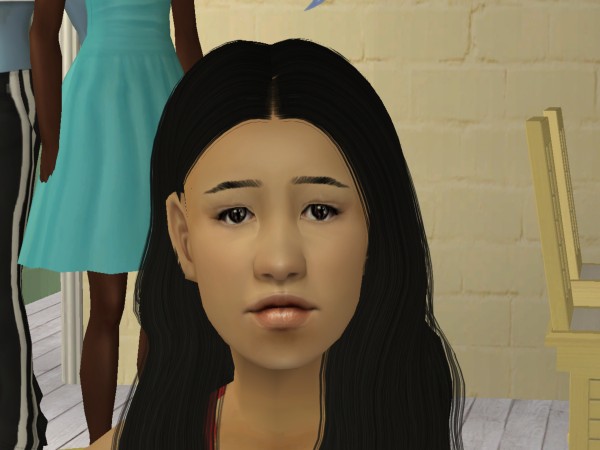 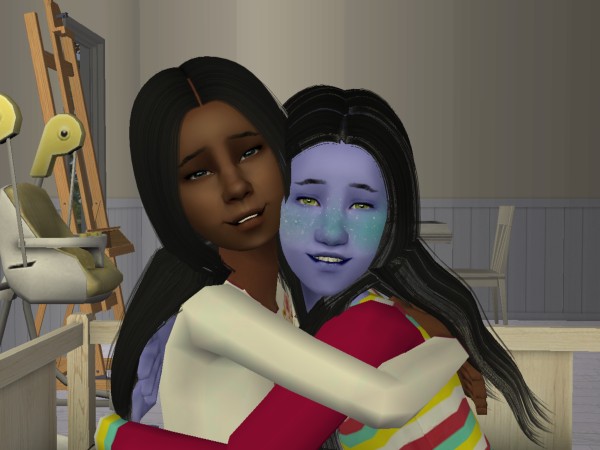 Have you ever walked into a room & forgot why you went in there?
What if God is playing The Sims & he just cancelled your action.
Adopt-a-Sim My Creations My Tumblr
Back to top