It's Virginia Beech's off-to-college party and Dixie, who'll be helping her move, is demonstrating how much university life has matured her. Sarah Ruben let her mother tell her how to dress one last time, on the theory that she could change as soon as she got to college. Her big sister Amanda is happy to see her. "Your hair looks even stupider above that dress."
"It's ironic."
"You mean moronic, right? There's a big difference." Generations mingle at Sam Bubbler's parties. Here Ruby Gorey attempts to get to know her future mother-in-law Jane Stacks better. Beverly Spitzig is only interested in scarfing down all the chips.
Ugly is in the heart of the beholder.
(My simblr isSim Media Res . Widespot,Widespot RFD: The Subhood, and Land Grant University are all available here. In case you care.)
Roseblossom90

Rachel Schuyler after she grows into an adult. There is something about her face that I just love.

Rachel's best friend Justine as an adult. I have totally fallen in love with her. She is currently my favorite sim because of all the troubles she has been through in her life.

The moon so bright shows me the way
Deep in the graveyard beside her I lay
Knowing she'll keep me safe from all harms
Though six feet apart, I lay in her arms...
White Queen

With boyfriend Bernard, soon after moving into their own place

Happy about her new baby-bump Allegra Gorey sampling Martin Ruben's attempt at making cheese grits. It's not that bad, though Jane made them better. Heather Huffington pleasing the last of the frat boys by making food for them, while not overstraining herself or messing up her hair with any nasty steam. It's breakfast-time, right?
Please support the Sim National Labs Folding@Home team!
Stuff I've made!
White Queen "Fronie", one of a batch of Sims I made and turned into Townies. I used a name generator, and it is apparently an English name. She married into my ISBI. "Velma", from the same Townie project. After attending two weddings in quick succession attired in braids and a tight dress with dragons on it that she got at a rummage sale, Penny Weiss takes advice and goes down to Booktique to get a professional help with her look. After all, Dixie's getting married soon; and Rhett's got a job now, so it's not out of the question that Penny will, too! Circe Beaker jumps out of bed to run to the bathroom. She has a feeling that the need to find another babysitter, now that Nervous is living in the house he inherited from his mother, just got urgent. Theodora Ottomas hasn't seen much point to getting dressed or going outside or seeing people since her dad died. She and Dad's cat Galore take care of each other. Rosemary Thyme wasn't sure the phone she got from her fiance's aunt's wife would work as advertised, but she'd run out of alternatives and what do you know? It worked! Her oldest sister Spring is no longer a ghost and is now a confused teen-ager!
Ugly is in the heart of the beholder.
(My simblr isSim Media Res . Widespot,Widespot RFD: The Subhood, and Land Grant University are all available here. In case you care.)
lauratje86

After spending quite a lot of time building lots for my prehistoric Widespot (pictures of the Hart tribe’s lot to follow later on or tomorrow, when I’ve got round to taking them!) I needed a break, so I went into one of my Widespot test ‘hoods to see what Penny would look like in prehistoric clothing. The outfit that she’s wearing reflects her connections with other tribes, as the Weiss tribe has no particular style of clothing of their own. Indeed, they never make their own clothing, or gather/grow/catch/hunt their own food, or make their own furnishings or living space - they barter with other tribes, exchanging magical services and spiritual advice for the things they need. Her linen tunic was a gift from the Land tribe, as were the flowers and the wooden bracelet. The Weiss and Land tribes are strongly linked - primarily through Skye’s long-lasting friendship with Beulah (who nursed both Penny and Woody as infants), but also through Penny’s childhood friendship with Mary and Woody’s friendship with Scot. Penny is also linked to the Hart tribe - through her lover, Rhett - and he gave her the fur cloak that she’s wearing.

A better quality version of this picture can be found here.
- My TS2 Victorian-Themed Pinterest Resource Boards -
Lady Scarlet

Here are a couple of mine.
1st sim is Abby Dixie Land welcomes Goldie Hart to college with an in-joke. Like a true nature's child, she was born, born to be wild... Honey Beare tries to make the late Ivy Copur feel at home after her resurrection. Sophie Miguel rocks out on her son's guitar, oblivious to Kestrel Hawkins's admiration.
Ugly is in the heart of the beholder.
(My simblr isSim Media Res . Widespot,Widespot RFD: The Subhood, and Land Grant University are all available here. In case you care.)
White Queen

Butterfly_lady, this is for TS2 pics, not TS3 ones. 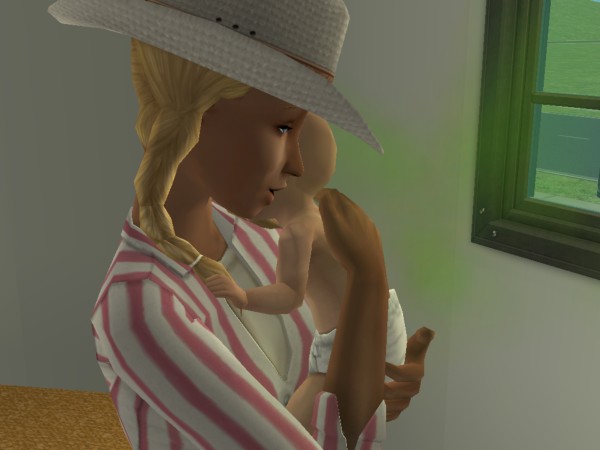 This is the townie who treated Katrina Caliente better than her own mother and aunt did! Good call bringing her over, Ajay Loner! 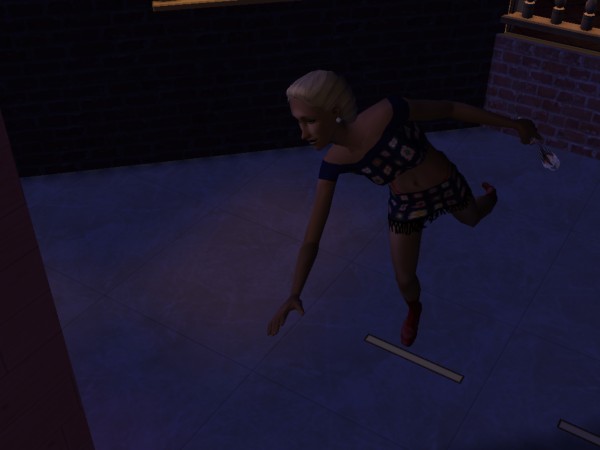 This is one of Dina's more revealing outfits and poses...she's daydreaming about spiking the hearts of quite a few men with poisoned darts. 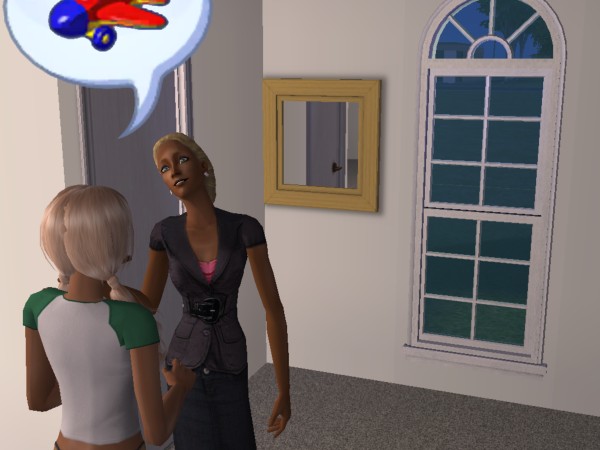 And this is her as the perfectly together Miz Dina that Sharla, who is trying to impress her with a joke about how bratty toddlers are, sees her as.
Please support the Sim National Labs Folding@Home team!
Stuff I've made!
Evolett

Sugah's Beauties
These are a few of my absolute favorite ethnic beauties from around the world...

(Psst...Sugah, Evolette - four pictures per post, no double-posting. It's a rule that usually means a high turn-over.) 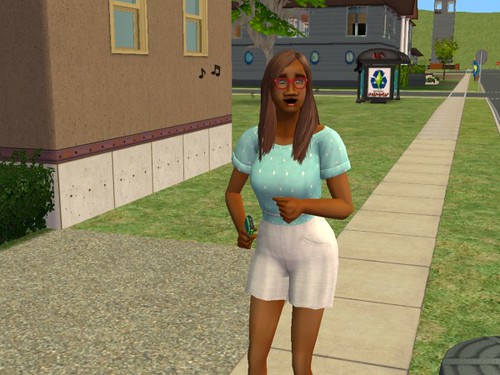 Nope, still not over Madeleine. This is how she dressed herself when she moved into the dorm (so I could watch her father drop her off). I downloaded this entire set of rompers, just for her. 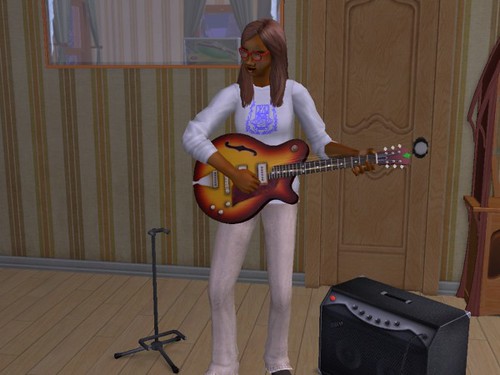 But then she moved into Alma Mater House, where it was winter, so she had to change clothes for a while. Rock on! 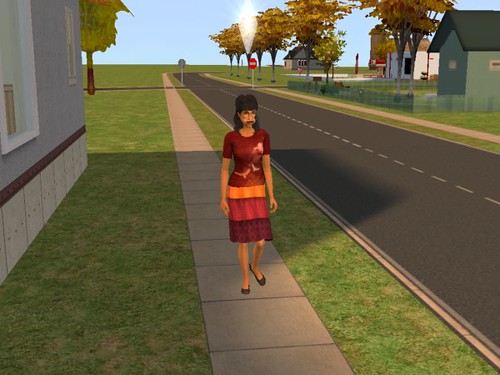 Ginevra Hawkins found the perfect outfit the first time she went to University Way Shops, and has not had to alter it, moving from dorm, to Alma Mater, to her final destination, the sorority. 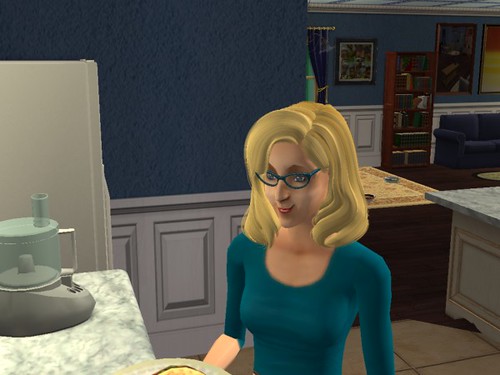 Polly Esther Curian looks kind of smug and happy for a woman who just threw up, ate, and is about to throw up again. I wonder what she knows?
Ugly is in the heart of the beholder.
(My simblr isSim Media Res . Widespot,Widespot RFD: The Subhood, and Land Grant University are all available here. In case you care.)
Babbelsim