One death and one wedding, one mac&cheese bowl in a crib.

2 updates in one
I forgot to post when I updated, so here are two posts. :/

Hi! First of all, sorry if my english sucks, I'm working on it. Second, I hope I'm not necroposting here but I want to say that this is a really fun challenge and I wanted to give it a new try. In fact, today I posted my first chapter and I'm kinda excited. Here is my blog https://nitzims.wordpress.com

Anyway, I wanted to ask here (I don't know if this is the right place) if there are more simmers doing this challenge. I am a late member of this community so many of the blogs I checked no longer exist or there are problems with the photos (especially with photobucket). I would like to read new stories, afterall I think this is my favourite challenge.

Thanks in advance.
toxi

It's been a gazillion months, but here's an update from the Cuckoos!

I'm started this challenge for the third time, I lost the previous attempts due PC problems but here I am again with the same founder. 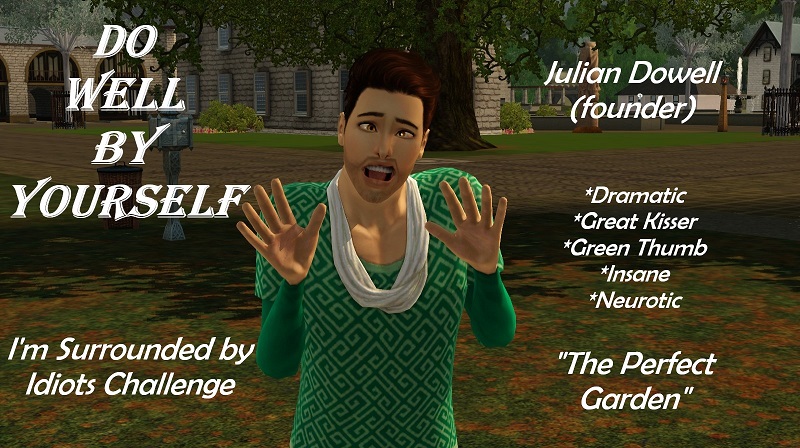 I started a Do it as You Go and ISBI challenge combo. My intention wasn't to write a story about this but I found a lot of hilarity and had to share it. I have two founder because of the Do it as you go rules, but only one is the torch holder. The first chapter had the same name as the story.
Chapter 1: Disaster in the Making
Numen Nella

Another chapter, I'm having a blast. I haven't had that much fun in a game in a long time!

Hi there! I want to share my ISBI as well, I've been updating it in my blog since march.

Here are all my updates, just today I posted the 12th update. One more chapter! Chapter 4: The Calm Before the Storm
Sonshine
Instructor
#161

If anybody still reads this, is it OK for us to click on the "go to work" icon on the UI if the carpool does not show up for the spouse/idiot ?
Numen Nella

Quote:
I would say yes, because I would take it as fixing a glitch. At least I make that exception in those commands, like when the school bus doesn't show up either.


Looking at the forum today, I realized that I had not posted the new chapter in this thread. Here's it: Chapter 5: And Then the Storm

Hi Nella! Thanks for the answer and update. I just thought of something. When do you make the heir/heiress active? When she becomes a YA? and then mom and dad both become "idiots?"

I have another question, Can I sell produce that the TH grows? Related to that, can I put a TH into the Gardener career and sell the produce as a gardener?
Numen Nella

About the heir/heiress that's exactly what the challenge said, they become the new TH at YA and the previous heir (or founder) become an idiot at the same time.

About the TH selling produce, that would be a yes if you're following the originals rules, the TH can basically makes money in any way. If you are playing with Toxi's rules (the new ones) she has this rule: "...Your sims make their money solely from heir’s and spouse’s jobs & investments (optional)..." but as the rule says, it's optional. For my part I allow Marge (my TH) to make money in any way possible. I know you're doing this with the Do it as you go challenge too, so the job sometimes change to accommodate that challenge rolls, she could be rolling a new job in the future and still sell the produce she grows. Hope it's help!

Thanks! I hadn't looked at the original rules yet. I am relieve to see this. She has 3 money trees and a seed to grow another one. They also have a cat now who is hunting. It's nice to be able to sell the prey.

They really could use the money especially since I had to build a tower, LOL. Kitty is at lev 6 now in the medical career. Fortunately, I've not rolled "get a new job" yet.
Numen Nella

I have a new chapter, it's time for Marge's revenge

Hello! I have a new chapter

Putting this update here too!

Chapter 8: All the Kisses
Numen Nella

A new chapter! Chapter 9: I don't Have a Name for This

I moved the story to WordPress.
Numen Nella

A new Torch Holder had been chosen!
Numen Nella

Quote:
It's already there! But thank you for the suggestion.