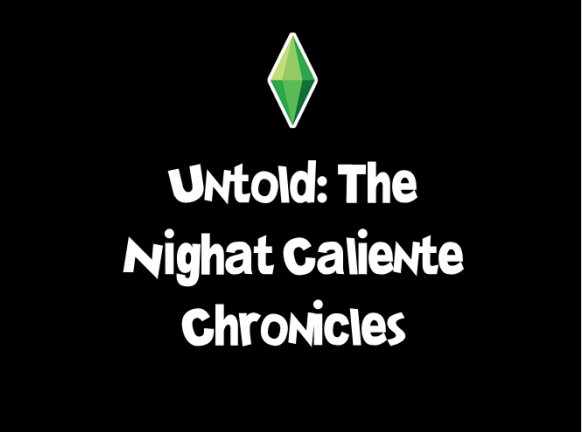 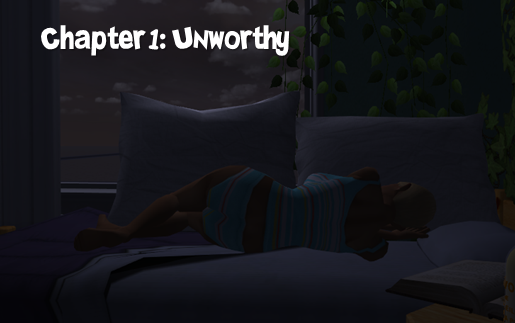 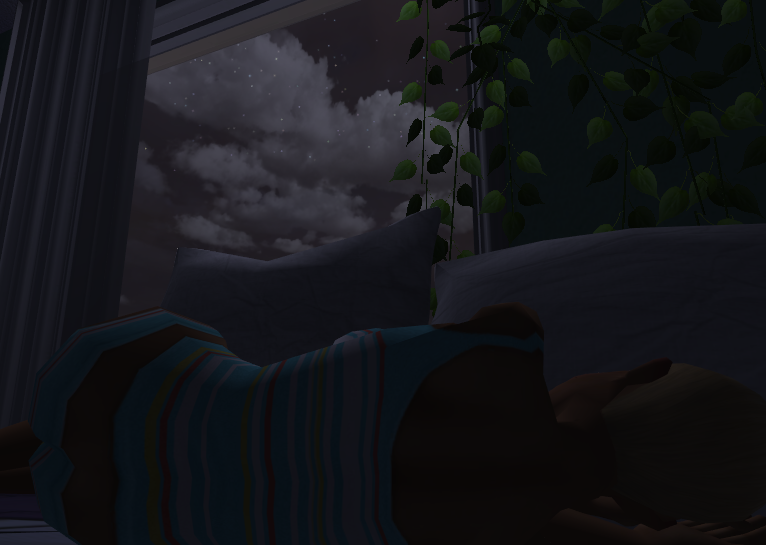 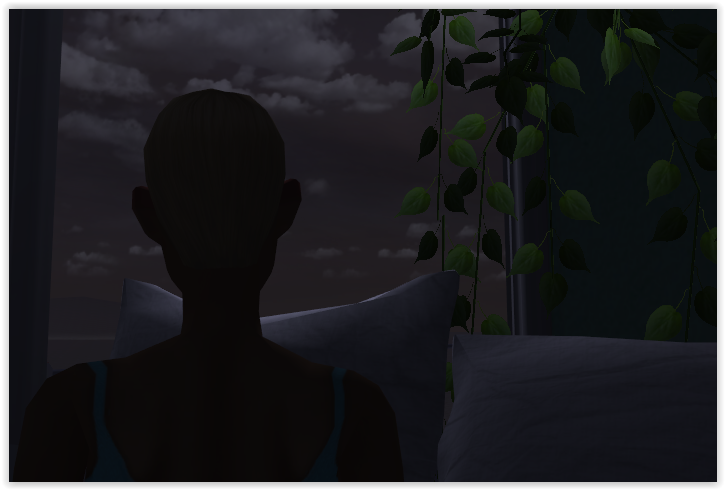 Nighat (Al Mahmoud) doesn't remember the last time she's gotten a good night's rest. Hell, she doesn't even remember the last time she's gotten any sleep at all, not since her parents, who are at each other's throats almost every day, began arguing every other night keeping her awake in a state of panic over who will be the first to throw a punch. This danger was always never the case however. In the beginning of Tariq and Benazir's marriage, they were irrestible to each other and were hard to tear apart. Yes, every relationship has its rocky moments but there was a strikingly odd passion that drew them together and that eventually harmed them. From early childhood family photos, you can even see the bliss still clinging on this once promising family. Even Nighat's remembers..... and longs for those days. 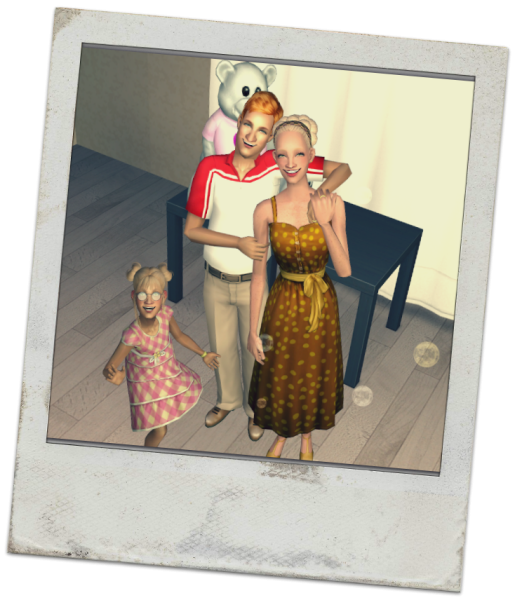 As she began to grow up, Nighat tried to keep tabs on the family bliss she had at nine years old.... 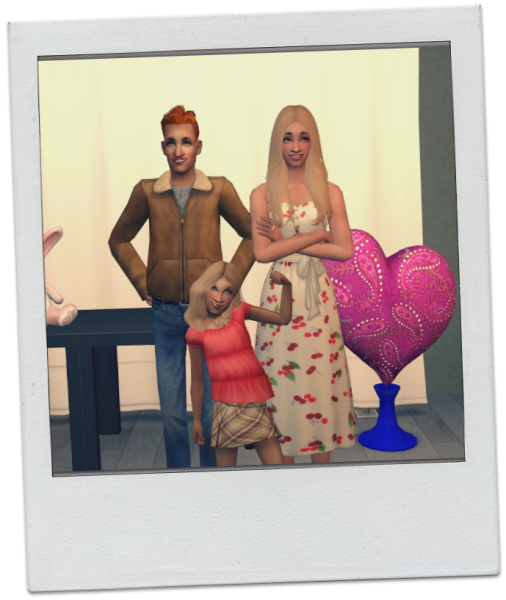 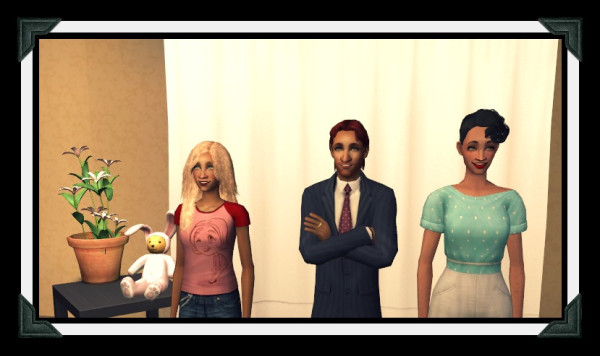 But that soon began to fade when her father went from small time factory worker to corporation admin after his time in the second Worldsim War. But it seemed after Tariq returned, he was never the same. A couple of years later, the factory went out of business due to falling short in competing with other foreign companies and thus Tariq was then dropped. That was the beginning of the end. Benazir began to take up work with the local farming stations that brought over grains from Africa to Simamerica. She was only making ten dollars an hour but it was enough to keep the lights on. They still owned their very big modern home, which gave them (well, really Tariq) dignity because Tariq didn't really want any of his neighbors or close friends to know of the strive the family was in. He provided for 17 years and now it felt like he would never get up out of the rut he was stuck in. Benazir tried to encourage and help by telling her friends' husbands of what had happened and the state they were presently in but this only upset and angered Tariq more because he didn't want to feel like he was "poor" or in need of a handout. It was just a "tough occurence that'll pass once he gets hired" as he would put it. Yet Benazir was afraid that they'd be stuck forever like this until they died (or at least separated...) and thus she felt that she had to finally "wear the pants in the house." Yes Tariq applied and applied and applied but she was taught if all else fails you have to find a new way. Benazir could never understand why a man couldn't just take the help given but instead of forgiving her husband, it put her in determination.... and rage.

As you can see the Al Mahmoud's are in a very tangled and complicated situation. There is no right nor wrong. No bad guy nor good guy. This is only from Nighat's perspective. Nighat's journey into womanhood and what she learns along the way. 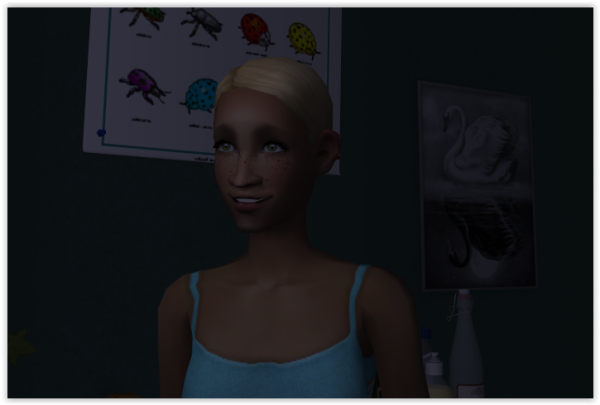 Nighat felt warm. She looks outside and up at the stars on this rare quiet arabian morning. "Maybe things will change," she thought to herself. Maybe this day will be a new day... a new awakening. Not really for her, but for her parents to see the anguish they put their daughter and themselves through and to hash-out all the issues within the family unit. Maybe they'll be a family once again like in the first family photo they ever took.

As Nighat looks out and ponders deep in thought. Something bumps her from her cold dark room, suddenly.


"Oh My God!", she exclaims as she quickly looks to her side to see glowing green eyes. 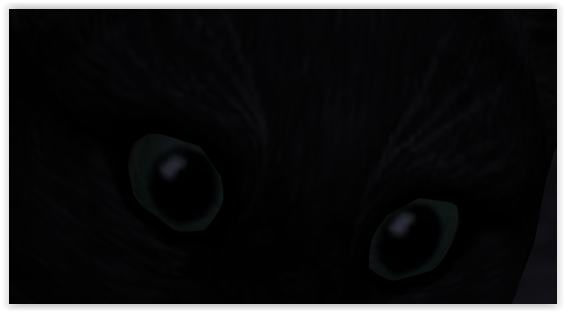 It was no one other than her cat, Benji.

She laughs at how ridiculously startled she was even though it was rightly so.. 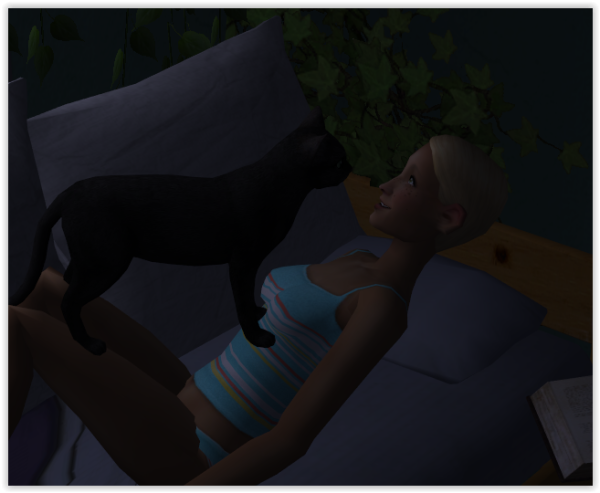 "Benji," she says still laughing, "please don't scare me like that again!"

"Awwee, sweet baby. Okay. You get out of this one. But it's your only 'out-of-jail' token"

Nighat kisses Benji and gets up to feed him.

Benji was adopted out of the slums of Al Simhara. He was needed when Nighat began searching for an escape. Without him, she would've succumbed to her thoughts and the ill of Depression she was facing. Her thoughts of being the cause of her parents demise made her not want to exist anymore but Benji was the angel she needed to keep her alive... even if it was a for a little bit longer.

As the morning emerges, there's still no sounds of parents groggy from last night. Nighat forgot that since it was Friday (rest-day for for the gardeners and farmers), her mother was off of work; but even that alone didn't make since for why it was too quiet.
.....

While she walked down the stairs she could see for why her night and morning had been so silent. On the dinner table had been placed a wine bottle with a glass of red wine still in it. Both lukewarm. Next to them, overdue and upcoming bills and a planner dating when the bills were actually due and what day they'll be actually paid on. Nighat looks at this but isn't stunned. For her mother was the one who conjured this sad display of stress and who drinks alcohol to block the pain of everything wrong in life; that including the air conditioning being turned off for more than two weeks and the risk of more utilities being shut down. 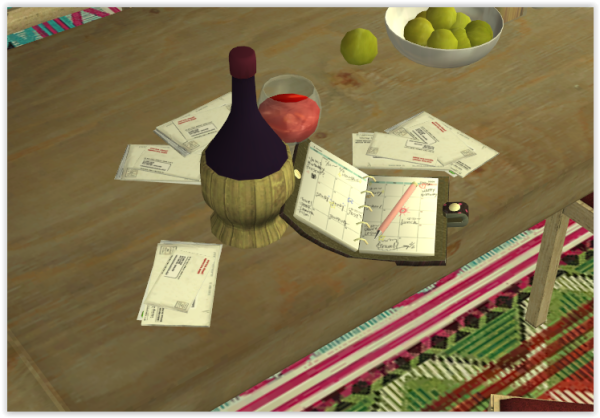 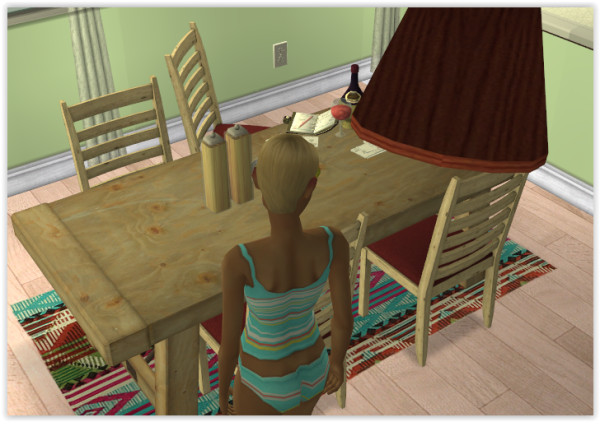 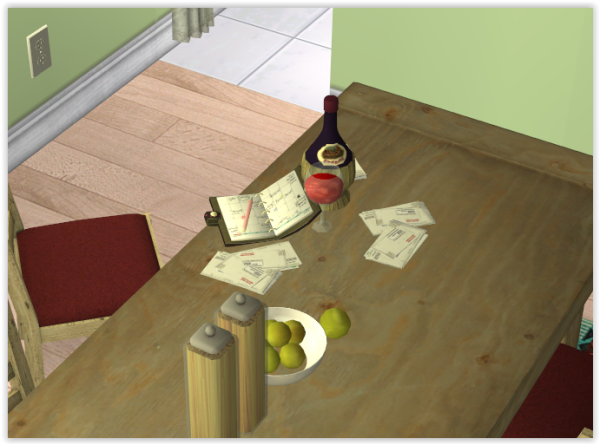 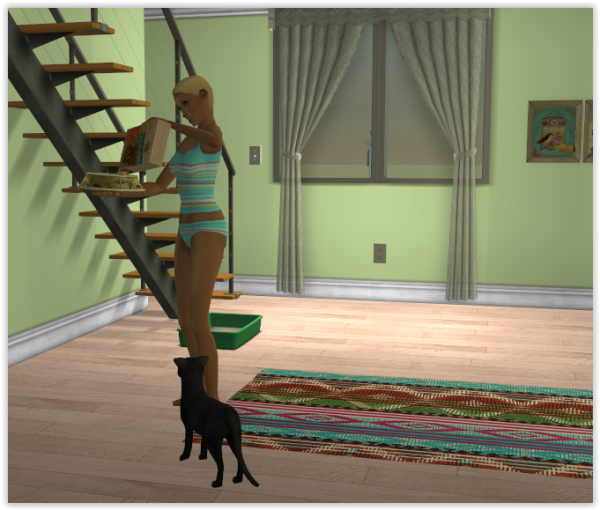 Regardless that doesn't stop Nighat, while pouring Benji's fresh bowl of "Kitty-Oats", from feeling good. At least her parents weren't arguing for once. That notion made her thoughts that morning go from dark to light. The heat didn't even bother her... even if her body was hot, on the inside she had a sense of 'calm cool' peace. It was rather a feeling she hadn't felt in a long time and made her realize that happiness isn't too far away for her to reach.

As Benji munches and as Nighat prepares breakfast for herself, sounds of footsteps above on the oak floor emerge like a thunder storm. That: is the sound of her mother. It would seem Benazir had enough of the day already. And having enough of Tariq to add to it as well. Soon after Benazir, Tariq would arise as well and the endless bliss she would feel would soon be wiped from her very soul. 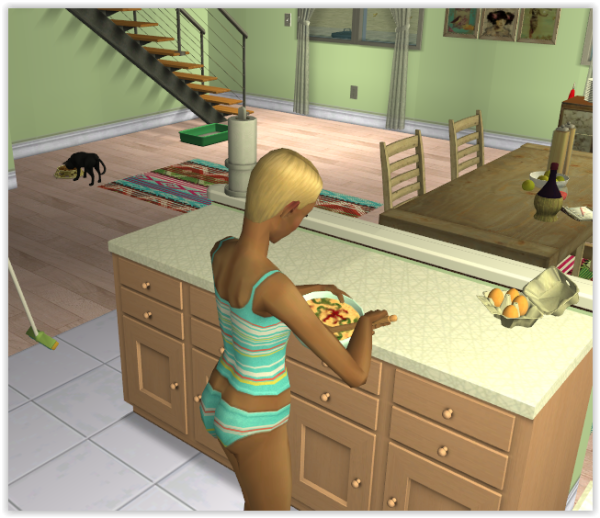 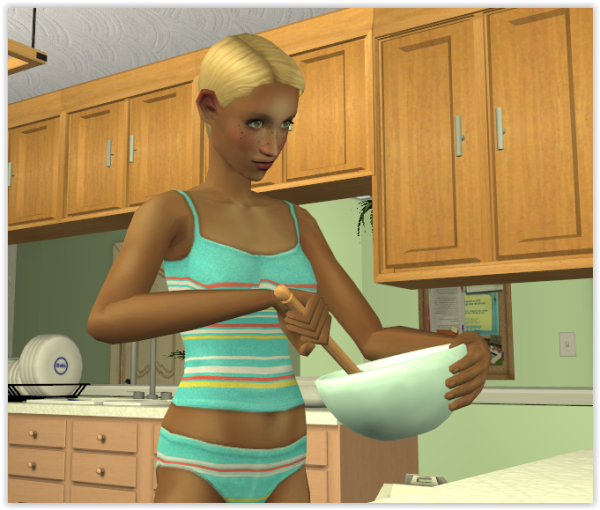 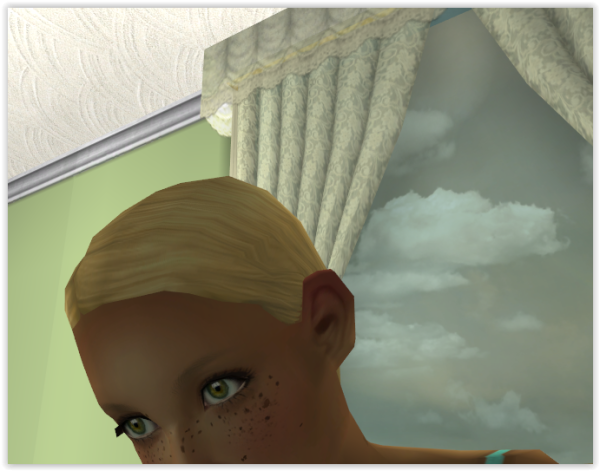 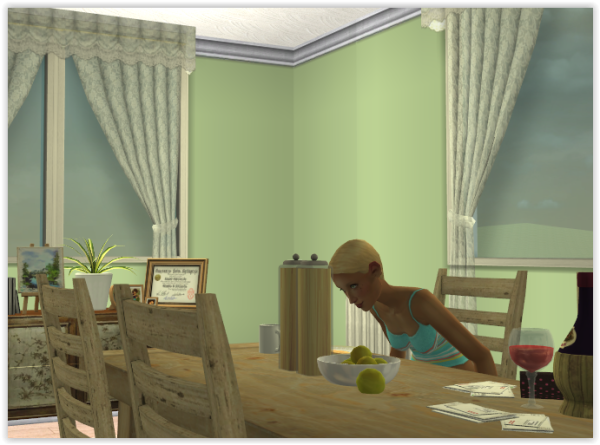 She decided to sit next to the worry and took in the state of fear her family must feel and be in. That 'calm cool' peace however stayed with her and comforted her. Maybe it was Benji's spiritual essence or maybe it was her mania. Who knows. 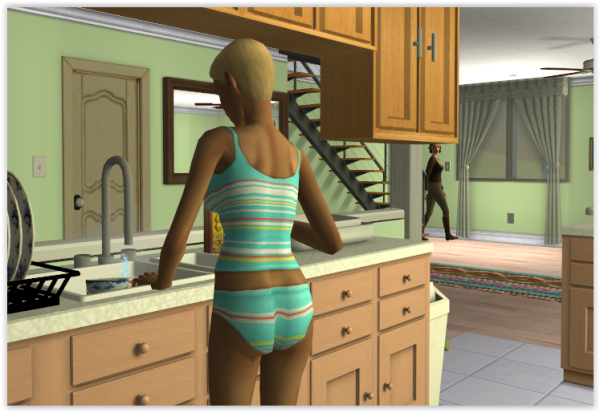 After Benji and her finished up, Benazir arrived, late to the fresh omlette meal Nighat just made. Benazir once was a doting house-wife, but that life was long gone. The family rarely sat down for dinner (or anything of that nature) anymore. The traditions of a once-traditional family now include separate dinners in separate rooms. Sometimes take-out or sometimes frozen. Not that that is a bad thing. A lot of modern families have that approach but it seemed with the Al Mahmouds, it was more to seek safety rather than self-relaxation. "So It seems the office is calling all of us in to work some extra hours... something about raining in the afternoon and harvests sales going up or something... anyway, I'll have to leave in a few so you'll have to take the school bus."

"As you can see from my obvious wine-spell last night and the heat inside and out, we'll need it-"

Creeky wooden stairs break up her sentence as Tariq heads down-stairs in his grumpy state. The once bliss Nighat had is now revoked and she feels numb once again. Her emerging thoughts of doubt, anxiety, and fear burst through. 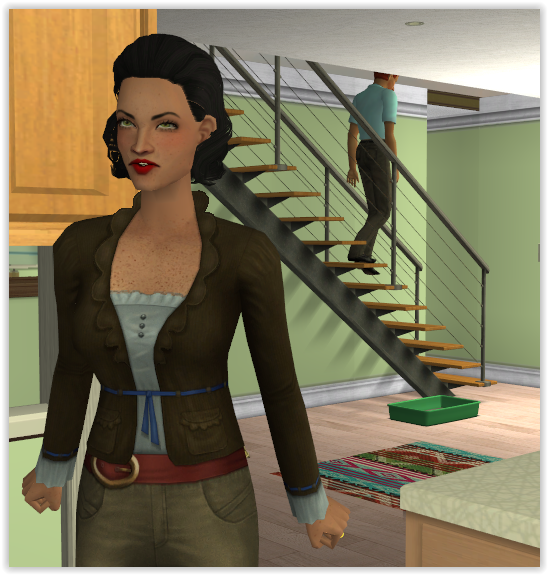 Silence falls over the couple and their daughter. Nighat prays that this silence will last just fifteen minutes longer... 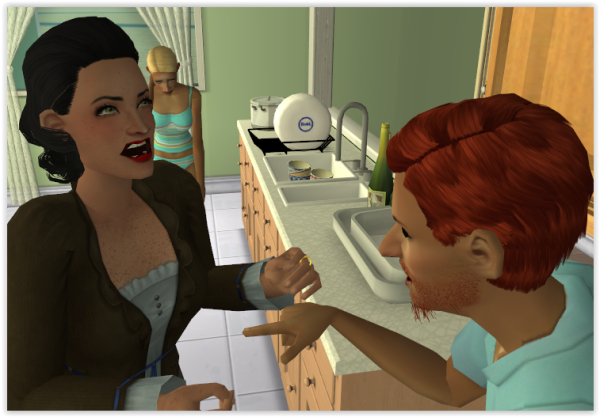 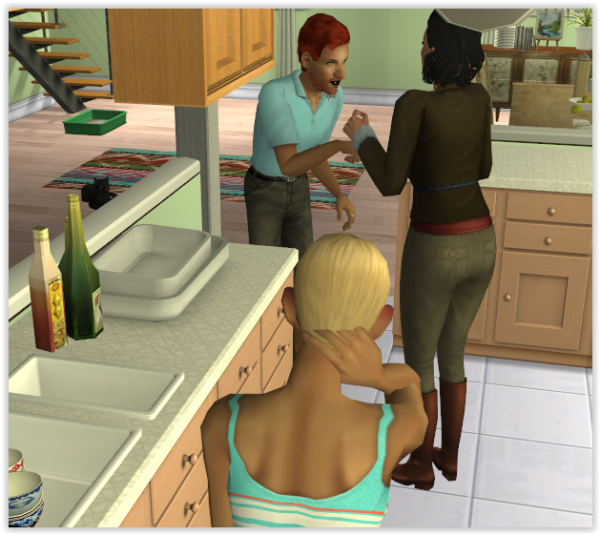 "Look Benazir, I am not in the mood for it today.... Nighat, will you please tell your mother that she doesn't have to constantly remind me of this twenty-four seven!"

"Well when you constantly turn down my affection and help, what else am I supposed to do, Tariq! Beg and plead?! No! Be a man! Stop complaining and get a new job already!"

"You know I am applying and applying! We all know that! Hell, the whole neighborhood probably even knows because of your big mouth. I am trying!"

"I am too! You just like to complain and make me do everything!-"

"That's because you like to be control of everything, and you suck at it, you bitch!-"

Silence hovers once again. The heat has soaked up their faces and bodies. This once romantic passion has now sizzled into passionate hate, and the sweat that brought them together during sex will tear them a part in furiousness. That same sweat though is cool and drips down their backs to calm before the actual storm. The words still linger around. They stare-off at each other. The stake of all this falls into Nighat's heart. She's at a lost and she begins to shut down. Then the bomb hits - 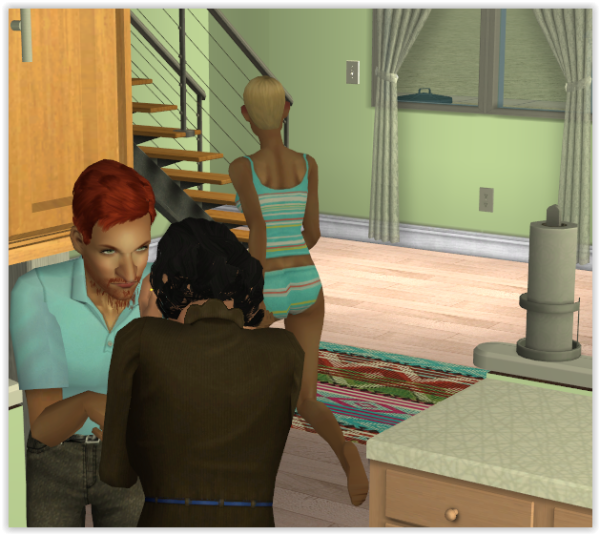 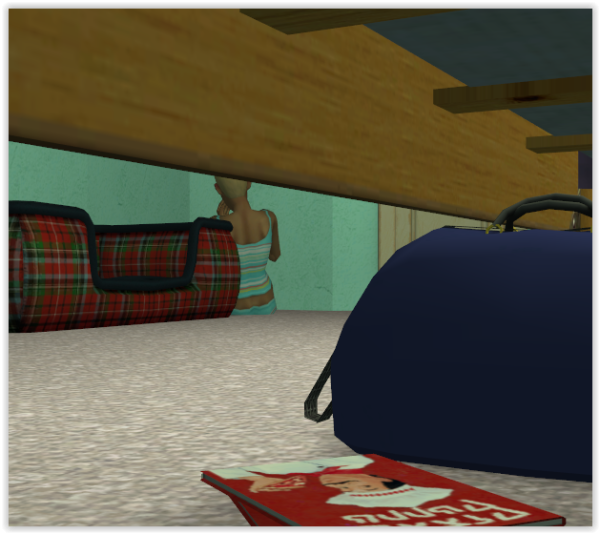 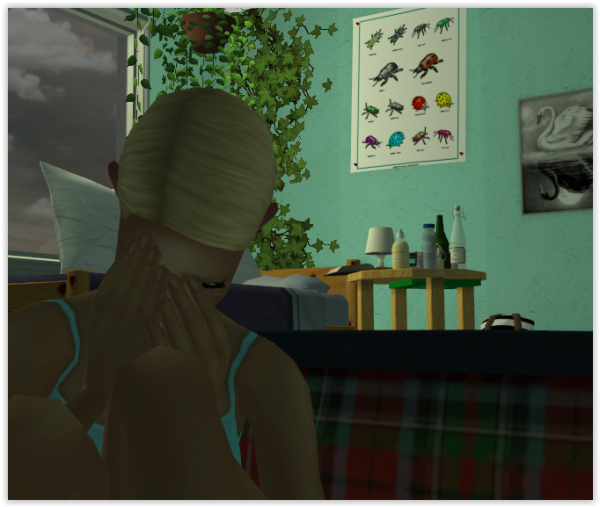 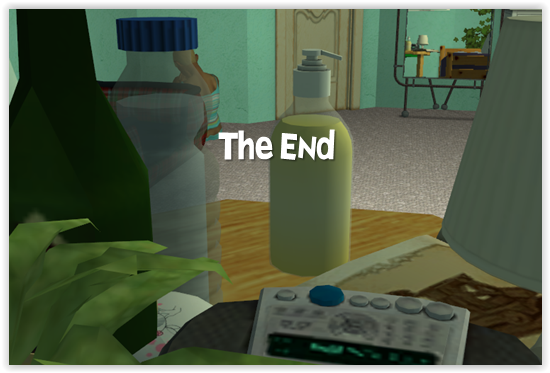 i absolutely love this,it's not often i see a good sims story about the dead ancestors.

i hope this continues.
I May Be Life Dumb But I'm Sim Smart(mostly).
My Tumblr
Back to top