The Art Demise Chapters 1-2
Note that these were retrieved from my chapters in The Art Demise in The Sims Wiki, which can be seen here
This demised artist again. His name was Cameron. Cameron Qualls. His summon was a dizzy summon. He was in bed, still with that time he was summoned in his mind. He didn't know what to do when he lost all art skill. It was now his only chance to return it before his life comes back. 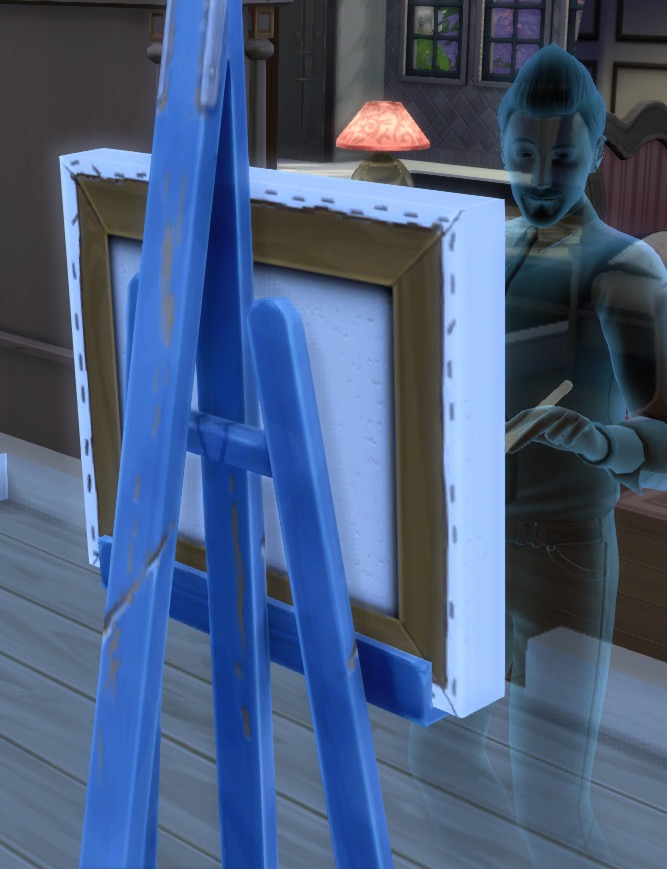 The next day, Cameron and his two friends, Kent and Robi, woke up, and have their breakfasts. Once again, when Kent and Robi was at the table, ready to eat, it was always the usual morning; just the two friends together, but Cameron wasn't there. "This was like the 30th time Cameron hasn't had breakfast with us," said Kent. Then, Robi immediately said with a retort, "He's probably just eating his own breakfast upstairs again." This has started since March 2.

After his meal of eggs and bacon, Cameron decided to work on another painting. Another of his reference works. He decided to take a photo of the scene of his room and started to paint from there. When he was done, he hung the result near his bed.

Robi didn't have anything better to do after breakfast, so he decided to write his next book, and because he was all playful, he decided to write a book called "101 Jokes." It was a book that contained, as can be told by the name, 101 original and classic jokes. After the book, it was an excellent book. When Kent read it, he tried some on Robi. It was so funny. Plus, Robi decided to make a copy for their household and publish the real copy.

Work was starting in about an hour for Robi and Cameron, so for the next 60 minutes of free time, they both decided to watch some television. After that, they headed to work.

Without anything to do again, but for Kent, he decided to get money from hacking a complex and their accounts. Their bill was coming soon, and because they have a huge house, their bill was around Â§6,000 to Â§7,000. With luck, he was able to take Â§5,607 from their accounts. He wasn't able to rack up enough simelons to pay the bill, but it was worth it. It was still bad news, because the bill was nothing like the usual. It was a bill of Â§8,496!!! Kent literally freaked out from this. He hid the bill and hoped that Cameron and Robi can rack enough money from work to pay the bill. Apparently, Kent wasn't good at hiding the bill.

After work, Cameron found out about the bill. He was also enraged of this info. "Kent, why the heck is there a Â§8,496 bill here?!"

It was a very unknown question. Kent Battle hasn't received any single thing like it. Not a bill worth Â§8,000. Nor has he received an angry question from Cameron Qualls.

"I'm not going to ask you again. Why do we have a flipping bill with at least Â§8,000 on it?!" The angered ghost didn't stop asking Kent about the bill until he was given an answer. He hesitated, but then finally decided to speak up. "I... I don't even freaking know why!"

Has it been that quick that Cameron decided to stop? He was still full of sweat. Also, because Robi and Cameron go to work and come out of work at the same time, Robi found out as well.

Something needed to be done fast, so he published his 101 Jokes book. Then, because all appliances go off in 2 Sim days, Robi also had enough time to write another book. So he went to write a book about art, which was Cameron's big interest in his life, but he wouldn't seem to mind to Cameron for Robi writing the book.

After he published the book, Robi went downstairs for dinner. He had the same thing for lunch today. After that, Cameron grouped up Robi and Kent for an announcement that he planned. "Look, I know how gloomy of a week we're having right now," stated Cameron ", but, I think we should have something to do for the night. Tonight, we are going to visit Sims National!"

"We won't let you make that same mistake like last time! Remember that time you set a fire in the grills to the national park?! You said that it wouldn't 'be a big problem,' just because you're a ghost. Guess what, some of the Sims almost died. That's when WE had to extinguish the fire, with the other Sims' help!" Kent retorted.

"Plus, it got you banned for a whole MONTH for the incident. You're lucky no one actually died!" Also retorted from Robi.

All of what the two said was true. Cameron went back into that day he set a fire in Sims National by using the grill. He didn't think it was a major issue, because he's a ghost and he couldn't die. However, that same day caused some Sims to go into flames. They were able to extinguish themselves though. It left no one dead, but the fire had to be put out by Cameron's friends, and Kent and Robi's friends all that were at the park. After it was all over, it ended with no one dead, but Cameron getting banned for a month.

"Come on. Why retrace that memory back in January?! It's only March, so my ban is over anyways. What could go wrong?" Asked the ghost. The two friends sighed.

When the friends arrived at Sims National, they were still worried. No one was there. Besides, it was night time. They sat at the nearby bench and had a chat."Yo, you still think it is a good idea?!" Kent kept complaining because they didn't want what happened last time to happen again.

"Look, Kent, I'm sure it's ok. I won't use the grill," Cameron did a direct retort. Robi had to pee, and ran to the bathroom house nearby. A few hours have passed and no noise have been made around the park, besides the talking between Cameron and Kent and the fountain. After a while, they gave up and went home. Robi made it out in time to find out they were leaving, so he tagged along.

"Well," Cameron started to speak ", that was a total letdown." Everyone went to bed after, all bored.

The next day started horribly. It was the final 24 hours to pay the bills, and Kent was the first to realize. He was panicking and waking Robi and Cameron up.

Only a few hours would the income for Robi's books be earned, but they still didn't have enough money to pay the bill. "Since when the world have we had a bill this huge?" proclaimed Robi. Without the simoleons to pay their bill, they wouldn't have needs fulfilled.

The last 24 hours passed already, and royalties for Robi's books STILL haven't arrived. Soon, the appliances started going off one by one, and it started with the television. When Cameron went to watch some action shows, the TV didn't respond to the remote. "Well shoot! The TV's done for!"

Soon, the other appliances stopped working. Robi's royalties just arrived. It was just in time to pay the bills. Soon, all the appliances came back on.

Cameron, being happy that Robi was able to save the three, just went and invited Denise; he was going to paint ANOTHER painting; one from reference.
1 users say thanks for this. (Who?)

Quote:
Thanks! I had took a lot of time to write this. I plan on adding the other chapters from my fanon from The Sims Wiki
I mod every now and then
Back to top