Tutorial: How to Create Custom Service NPCs
This is an adaption of Grapholina's Ugly NPC/Townie Makeover tutorial. Instead of using Sim Surgery, we are using Alt Sim Surgery to prevent any clones in your neighborhood and generally keep the neighborhood more clean.

You'll be able to do things like these by the end of this tutorial! For this tutorial, you'll need:

* SimPE 0.75_69
* Alt Sim Surgery
* Christianlov's Gussy Up plugin (you can find it in this archive) OR InSimenator (which has the Temporal Adjustor which you can use to fix the sims' appearances)

Step 0: Always, ALWAYYS back-up your neighborhood first before doing anything unusual or SimPE in general. Please do not skip this step! Made your back-up now? You're good? Good!

Also, make sure that you're not editing any of the unsafe NPCs or you may corrupt your neighborhood/game. It's never save to attempt to edit any of the universal NPCs such as Grim Reaper or Therapist!

Step 1: First, generate the service NPC you want in your neighborhood as usual. You can either use the Townie & NPC Maker to generate the NPC or use the phone to call them. I prefer to generate them in the "natural" way, though. Take a note of the NPC's name so we can find them later. In this tutorial, we have a matchmaker NPC named Wendy Deppiesse. Save and exit your game after generating the sim.

Step 2: Now, open up Body Shop and create your custom NPC. If you want your NPC to wear an unique outfit and not the default one, you can customize that here as well. Otherwise, just choose random ones, we'll fix that later. Just save the sim once you're done and close Body Shop. Note: To make things easier, you can also open up SimPE's (Alt) Sim Surgery to extract the NPC sim's appearance to Body Shop, which you can use as a blueprint to customize your NPC sim. (They should still have their special NPC clothing to begin with, so there's no need to download mods that unlock service NPC outfits!)

In this tutorial, I'll show you how you can still make the sim wear special NPC clothing, such that you can use this tutorial for all kinds of sims (ie sims that you have created or downloaded before or if you want to use sims that were born in-game in one of your neighborhoods!)

Step 3: Go to your Documents/EA Games/The Sims 2 (Ultimate Collection)/Saved Sims folder and rename the most recent .package file to something you can recognize better. (in case you have multiple sims saved in there) Step 4: Open up your neighborhood in SimPE and go to Tools / Neighborhood / Alt Sim Surgery. A new pop-up should open. Step 5: In the Sim Pool, choose your NPC sim as the Patient Sim that you've just generated in-game and as the Archetype Sim, choose the saved template sim from Step 3. You may or may not have a thumbnail, that's a common bug with townies/service NPCs in SimPE. That's why I'd recommend taking a note of the NPC's name in Step 1.

A) Now, if you want your NPC to have custom outfits and hairstyles, do not tick any of the ticks and just hit "Surgery". This way, you'll literally replace everything and the NPC will look exactly like your Body Shop template sim.

B) If you however wish to keep EA's NPC outfits, but change the skintone, face, hair and eye color, tick the following and hit "Surgery": Step 6: After the surgery is finished, you should be directed into the sim's description file. This is where you can customize your NPC even further, such as skills, interests, personality points, etc. In this tutorial, I'm renaming the matchmaker NPC to Princess Elynea Vulpecula, because... why not? XD Step 7: I'm also giving her the "Pleasure" aspiration because I don't think service NPCs ever get generated in either Grilled Cheese or Pleasure aspirations? So, let's change that! Step 8: Now, let's check the SimDNA because sometimes, Alt Sim Surgery does not always update it correctly.
A) If you chose to replace the sim's looks completely in Step 5, you will only have to fix the DNA for hair if the sim is an elder... just change the 5 into either 1, 2, 3 or 4 (where 1 is black hair, 2 is brown hair, 3 is blond hair, 4 is red hair. You don't want 5 (=grey) as your natural hair color, do you?

Note: If you have a sim that uses a dyed hair (it will become a 6, which stands for dyed hair... you'd basically also have to change it either to 1, 2, 3 or 4)
Once you're done, you may skip to the very Final Step now, as you don't need to fix anything else! Just load up the game, summon the NPC and have the NPC change their appearance one more time to update the NPC's thumbnail!

B) If you chose to keep the NPC's special outfit, you'll have to do a few extra steps to fix the sim's DNA and appearance. First, open up your NPC's SimDNA file. In this tutorial, I made an originally S2 sim a S4 sim, so that's why she still has some reference left behind there. Step 9: Just change the recessive skintone DNA to match the dominant skintone DNA like in the screenshot below. Step 10: While still in the NPC's SimDNA, copy the gene code for the Eye gene. In this tutorial, I want to give my matchmaker NPC the alien eyes, hence the gene code 12d4f3e1-fdbe-4fe7-ace3-46dd9ff52b51. Here's a list of TS2 gene codes for each eye color, skintone, and hair color. Step 11: Open up the NPC's character file and look for "Age Data" and open it in Plugin View, there you should see a line that says "eyecolor". Step 12: Paste the gene code for the new eye color to replace the current old one and commit your changes. Step 13: Just an additional extra step, you can also change the sim's height in here as well. By default, all the sims are of same height... but did you know that you can actually customize that? Just change the value in sketch to something between 0.9 and 1.1 i wouldn't go further than that, though, to prevent weird animations. As a reference, 0.94 is the height of the teenagers in-game. So, if you give an adult a height of 0.94, they will be as tall as a regular teenager. In this tutorial, I'll give my matchmaking NPC a height of 0.95. So, she'd slightly be taller than teenagers, but shorter than regular adults/elders. Step 14: Now, save the file and open up your game. Make the NPC appear by either summoning them using the Teleporter Cat or just invite them over using a phone.
It looks like they still have the previous face and it didn't quite work... well don't worry we'll fix that in a minute 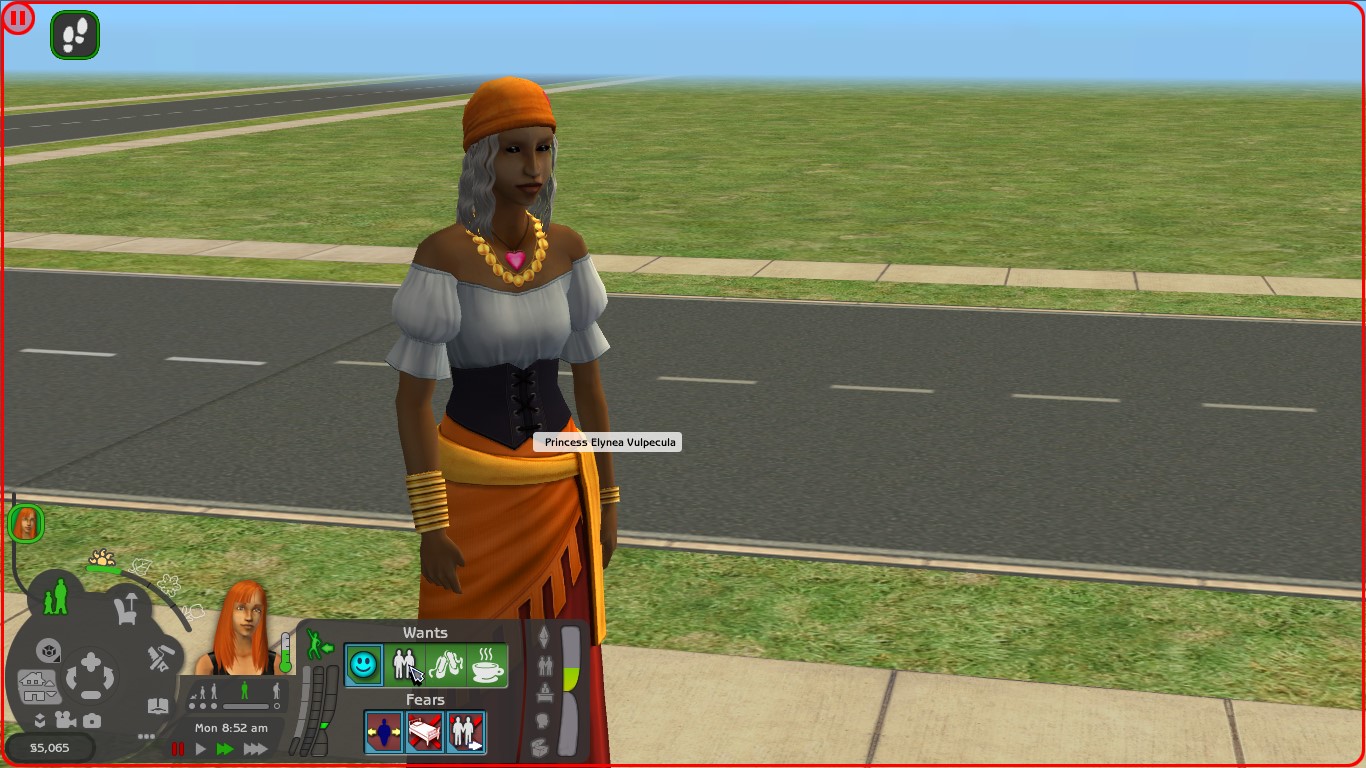 Step 15: Use Christianlov's Gussy Up mod or InSimenator's Temporal Adjustor to fix her appearance. Step 16: Yayy, it worked! We can see her new face now! Just click on "Accept" even if you didn't change anything. Step 17: But hold on... why did her face just disappear in the thumbnail?! And why does she get face 2 with brown eyes and no eyebrows if you make her change her appearance again?? Don't panic, it's because the game was still using her old face (that's why she still had her face unchanged when we first summoned her) and when we made her change her appearance, it could load the new facial features and display them but couldn't find the old one anymore to replace the new face with. For now, just change her appearance one more time and click on "Accept", even if she has face template 2, brown eyes and no eyebrows. We'll fix that in a minute.

Step 17: Again, change the NPC's appearance one more time and you should now see the modified face and the correct genes, but no eyebrows and makeup. Step 18: Fix your NPC's eyebrows, makeup, etc. one more time. This will be the final look, I promise! Final Step: You may wish to check whether everything's alright again. Just have the NPC change appearance one LAST time and check whether the changes you made stick now. If you've done everything correctly, the game should be able to properly recognize the new face now! Yayy!! And look, she's still got her special matchmaking powers! XD

If we check her personality, we can see that she properly has the Pleasure aspiration as intended! So far, so good! You can also use Tombstone L and D to verify whether the changes we made are genetic or not. For this I used the "New Baby" option and aged the baby up to toddler. It looks like she passed on the right modified genes, horrayy!! Note: Alternatively, you can also export your generated NPC sim from Step 1 to Body Shop first using (Alt) Sim Surgery and customize them there from scratch with the NPC outfits still intact. Then, you should still be able to follow the tutorial as if you'd want to replace the NPC's appearance completely like in Sub-Step A. I just thought I'd share the more general case as well, where you can literally choose any sim as the template sim. (ie a sim you made or downloaded previously.. or a premade sim from a neighborhood, etc.) and make Alt Sim Surgery replace everything but the NPC outfit and hairstyle.

But as you can see, Sub-Step B does not update all the references on its own and we'd still have to fix a few things here and there. That's why, I'd recommend extracting the generated NPC to Body Shop in the first place and customize them from there as you want... but just don't change the hairstyle and outfit if you want to keep the special NPC outfit and proceed as if you'd do Sub-Step A.

That's it, I guess! I hope you found this tutorial helpful and let me know if it worked for you! Good luck!

This is precisely how I customized the NPCs in my neighborhoods projects as well, including Sedona, Quadington University and Aileen Landing.

Wow this is super timely. I've been thinking about whether it was possible to make Bayoubash and CrispsandKerosene's TS1 Unleashed Miss Lucille recreation and make her a matchmaker. Turns out that I can!

This will be very cool to try out. Thank you.
I now have a Simblr!
Back to top