Things I've Seen/Heard/Read About in The Sims 4: Kits
Someone had to make the thread.

I can’t be bothered to do what I haven’t been doing for years, but please feel free to discuss the kits here.
->> Check Out Checkout: Journey To Employee Of The Month! <<-

~ Just a click a day is nothing short of helpful! ~
Advertisement
yaohui

Now I know the bunny is another "baby" 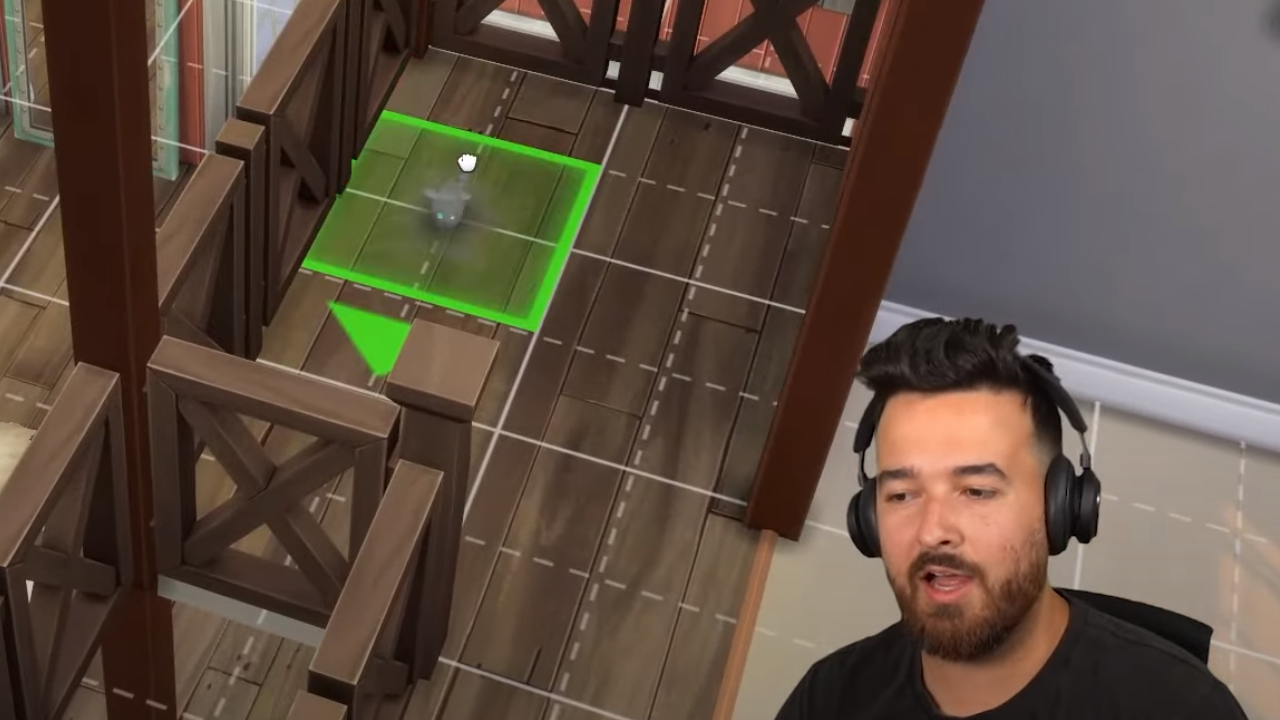 don't do this to me
what does his name even mean?
Hamishmc
Instructor
#4

Found on Twitter. Dust bunnies can spontaneously combust and burn the house down.

Glad I didn't buy that one!

There's got to be mods that doesn't force simmers to constantly vaccum the floors, also butlers weren't even using the vaccum. :/
emino

I'm more annoyed that my floor are sparkling more than a twilight vampire when it is not dusty. Also, apparently you cant do check for dust interaction if you live in a haunted house type.
Emino's Mobile Adventure, Emino's Simblr, My IG.
eskie227

Are thee kits for free? Like pick a kit when update you a patch? They can't honestly expect someone to use real money on these.
Guest
DELETED POST
3rd Mar 2021 at 3:40 PM

I managed to turn off the dust bunnies in game interactions, but when I did that some of my mods wouldn't work, and for a while I thought I had lost all my old saves. So I managed to get the game settings back to default, and recover my game. I am not sure why that happened, so if someone can shed some light on that it would be appreciated.

The dust bunnies spawn more often in the sims than they do in my own house and I have 3 cats, 2 dogs and two adult sons back in my house. My sims don't even have a pet, but they have lots of dust bunnies...but the dust bunnies are better than a borked game for now.


I have noticed now that the sims get a positive moodlet if the house is slightly dusty. "Somebody lives here." It is supposed to increase the positive effects of friendly or romantic social interactions. I also noticed that the maid brings along a vacuum and takes more time to clean the house and charges more. I have not tried to befriend the dust bunnies. The house I played last night only had a baby that just turned into a toddler, and i am not much into playing with occults.

So... To recap the Kits fiasco:
- The Kits trailer has more dislikes than likes and 99% of the comments are negative.
- Kits cost "5" in currencies worth more than the US dolar like £ and €.
- Some Yibs are struggling to defend this obvious cash grab. James Turner said Kits were overpriced; Lilsimsie is worried about the similarities between Kits and The Store.
- SEVERAL CAS items in the "Throwback Fitness Kit" are recolors of existing items (Source).
- The wall texture that comes with the "Country Kitchen Kit" is a recolor of a base game wall (Source)
SneakyWingPhoenix

And admit it: how many off you bought that dumb vacuum kit?

I don't wanna lecture yall, but I don't wanna hear complaints how the game is still broken from yall mouths because you felt short on content

Could have at least wait for a sake to drop. Also, yall spending it for ominous animated dust creatures to combust your house

What is this? I wanna say alice in wonderlabd, but that be an insult to comparing a best selling masterpiece to this crappy game lol
P.S. Sorry for my bad english.
Gargoyle Cat
Mad Poster
#13

Why does this sound familiar?  Did they do this or something similar in Seasons?  Vacuum up puddles or something?  Anyway,  https://twitter.com/JetSetSimmer/st...843106361024518
SneakyWingPhoenix

The good thing about the pack is that dust accumalates..But that its kinda killed off by being behind an overprice paywall.
P.S. Sorry for my bad english.
Naus Allien

I was thinking about the dust pack and I realize how much PADDING and SUPERFLUOUS gameplay it has. In The Sims 2 or 3, the dusting system would have been added in a random EP like laundry in Ambitions. The system wouldn't have as many features as it does in 4, but do we really need those features? Do we really need dust bunnies that behave like caged rodents? That's the problem with putting gameplay in smaller and smaller packs. Developers feel the need to somehow JUSTIFY the existence and price tag of that pack so they add a lot of unnecessary and shallow features. Take for example the two new aspirations. They're even dumber than usual, and aspirations in The Sims 4 are unfathomably dumb already.

Some content like Vampires actually justifies having its own pack by adding new engrossing features and depth. More often than not, features that were in an EP in previous Sims games, don't NEED a whole pack centered around them. More isn't always better. "Bust the Dust" is the perfect example of a feature that didn't NEED to have a whole pack dedicated to it. It's honestly a waste of time and resources they could spend actually improving the core gameplay.
Gargoyle Cat
Mad Poster
#16

I'm in a good mood today, so I decided to visit that place that I'm not going to mention by name.  I didn't hang around long;  my eye started to twitch.

When EA sees that people are willing to throw money at something for the sake of having something to complain about, what message do these brilliant people think they are sending to EA? It should be obvious. From EA's perspective, this nonsense translates to " We don't have to work hard and or fix stuff.  Just shovel it out the door and people will gobble it up, CHA-CHING!"  This is not earth-shattering news as we've been talking about this very issue for almost 7 years now.  What is so screwed up about it is people are willingly throwing their money at something that they didn't like to begin with just so they can "brag" about how they don't like it, according to them.  What kind of drugs are these people on?

These people can't think of better ways to spend $15.00?  There is a long list of charities that have been begging for help for the past year because of Rona; they would appreciate a donation in any size.  I don't know how tax laws work in other countries, but here in the Banana Republic, if a person has valid proof of a donation to a legit non-profit, they can write off said donation on their taxes.  If they didn't want to do the tax thing, they could have bought food for their neighbors, shoved the cash in a savings account...the sky is the limit.

I've seen a lot of screwed up things said in the sims community, this is the icing on the cake, for real.  When future packs continue to spiral into decline in terms of how much content they have in them, I don't want to hear about how it is somehow my fault because I haven't spent almost 7 years buying into this game.  Finger-waggers need to wag at the absurdity that lives within the TS4 community.  They will be easy to spot because they've made it their top priority to brag to anybody that will give them the time of day and listen to their bullshit.
SneakyWingPhoenix

Well, this ain't gonna chance, because any penny goes to these kit packs we'll get more of these. People half seriously made jokes how they're gonna be a breathing or watch paint dry kit packs, and they aren't far from this absurdity. Like when the last time in TS1, TS2, or even TS3 you bought a pack about vacuums? Never, because they didn't exist nor we should support this kind of crap. But that's at least what I would do.
P.S. Sorry for my bad english.
coolspear1

Yeah, but when these people you mention are saying the vacuums suck, maybe they're just being literal about the mechanics of the machines...

"Become a government informer. Betray your family and friends. Fabulous prizes to be won!" Red Dwarf - Back to Reality.

I'd link to the absurdity, but I can't because it would be considered mud-flinging across forums.  What I can post is some of the spicy that is going on which is funny and true at the same time.

These kits have shown how completely out of touch EA is.
What's in the Basket?
Emmett Brown

Carl's guide says that the dust kit comes with two aspirations; one for clean, one for dirty. Might be worth it for the game play. I think the kitchen stuff looks neat. Don't care for the dirty gym clothes one.

Sims are better than us.
Dixieland

They're watching the sales algorithms, people. Even if you really thought you might like to try one (

) of the kits, couldn't you have exercised even the slightest amount of self-control and resisted for a few days? At least a month would have been preferable, but buying this crap on day one sends a VERY bad message to EA. When you do stuff like this, you're part of the problem--not the solution.

A fool and his money are soon parted. ~ Thomas Tusser
Citysim

Or if you brought all three, Dust Problems in my Half Country Kitchen, while wearing clothes that look like they have been recolored by a 12 year old.
8265jww
Lab Assistant
#24

I’m playing a family called Crumb who I inherited from my cousin who doesn’t play any more. There a lot of them and they’re mostly criminals and they never clean. I got the dust bunny kit and their houses are now covered in dust bunnies and the kids are having great fun throwing them about. Neighbors come to visit and spend most of their visit cleaning, washing and gardening. It’s actually hilarious.
ticklish
Forum Resident

Quote:
My sims live in a haunted house and they can check for dust
Back to top