Custom Scripted Notifications (Edit)
So I guess this is my first entry in my forray into modding. Nice.

Many people have asked me how I was able to integrate custom scripting notifications for my neighborhood Arkhelios. To tell you the truth, I used my own personal edit of Chris Hatch's custom scripting mod. The issue is, the documentation is actually really weak and hard for a new player, so I've decided to release my edit and also put in a tutorial on how to use this mod.

The custom scripting mod has now been expanded to allow eight families (whereas the original only allowed four), and the notification style has been changed to TNS System to better match the look and feel of the original notifications from the Base Game.

Speaking of which, this mod only works if you have Open for Business or higher. It is not Base Game compatible.

Enough chit chat, onto the tutorial:

After downloading the zip file, open the package in SimPE. Click on Behavior Function (BHAV), and there you will see five resources listed. Right now, your main focus is on "Neighbourhood - Is Correct?" and "Script - This Lot."

"Neighborhood - Is Correct" determines which neighborhood you've selected for the Scripting. In this case, we've selected Pleasantview as our test hood for this custom scripting.

In this case we've selected Brandi Broke. Her Sim ID is 0xADAE78DA.

Go back to your custom scripting mod, go back to "Neighborhood - Is Correct?" BHAV. (Keep your neighborhood browser open though, we'll need it for later.) First, you need to click on the third block, which is "Neighbor's Gender(0=male/1=female). This is where you'll input the gender of your sim. Look at Operands. You need to change the third square on the top row. Change it to 00 if your sim is male, or 01 if your sim is female.

Next, click the block on top of it, "Stack Object, neighbour of type." This determines which sim is used for the custom scripting. This part is a bit more tricky, since SimPE operands are unconventional. SimPE reads the operands from right to left. So if my Sim's GUID was 0x12345678, I'd have to type it like this: 78 56 34 12

After you're done doing both of those, do the same thing for the fifth and sixth blocks, both Neighbors Gender and Stack Object. Save.
Now for the actual scripting. Go back to your neighborhood browser SimPE window, and from Sim Description go to "Family Information (FAMI)" and click the first family that you wanna script. Get the GUID value of "Now On Lot". In this case, for the Broke household, the lot GUID is 0x00000024. 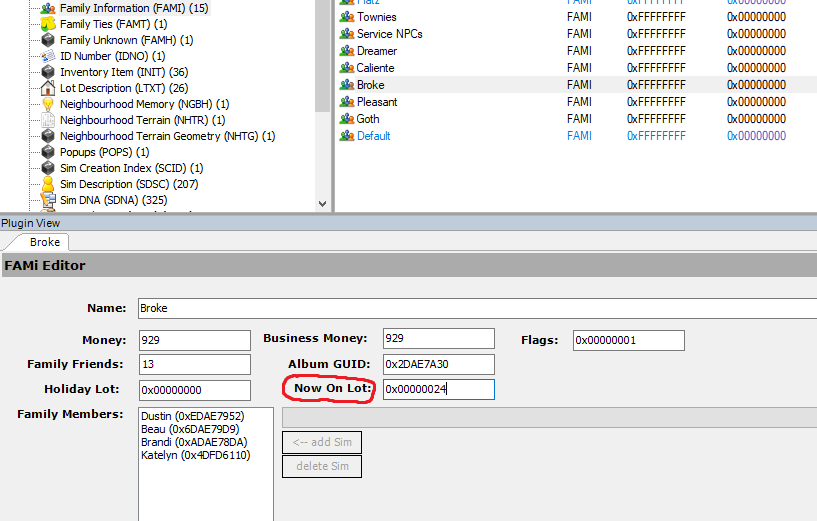 Go back to your mod window clicking on "Script - This Lot." Click on the third block, and again, go to the third square on the top row. Change the value to the last two numbers of your lot GUID. In this case, the value is 24, so I'll be changing 07 to 24.

For the next block, we need to put in the GUID of a Sim that is currently in the household we wanna script. We'll be using Dustin for this current "sim in the household." According to Sim Description, his GUID is 0xEDAE7952. 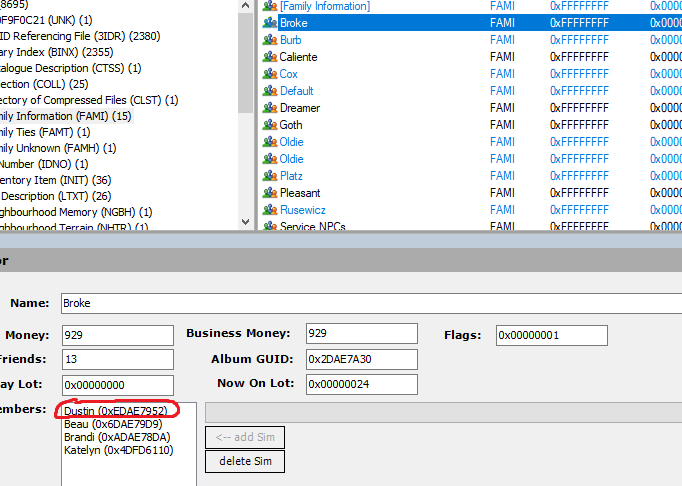 Using the method we used earlier with the operands in the "Neighbourhood - Is Correct?" section, input the Sim GUID in the operands of the "Stack Object, object of type" block. 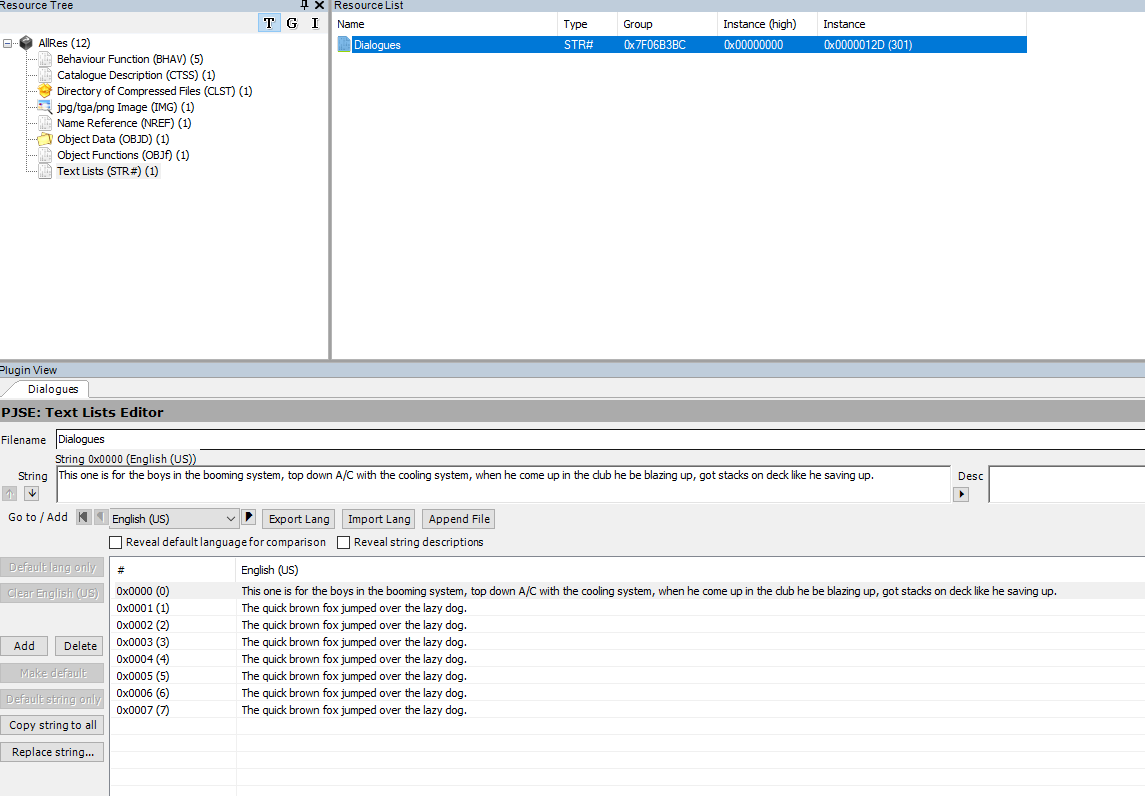 And.. you're done! To script more families, you'll have to go to the next block section, starts after the last block of the first section, which is "Dialogue (Text Notification)". Repeat all the steps for the families you want to script.

If you have less families than the block sections, (for example, you have five families but there are eight block sections) just don't modify the other sections, as they will point to data that doesn't exist, so it won't be used.

Here's a bit of a neat trick. To get the custom scripting to work, DON'T put the finished package with all the data you put in the downloads folder. Instead, put it in your neighborhood's folder. So Neighborhoods -> N001 (for Pleasantview.) Especially if you are a neighborhood creator, this way people won't have to put the custom scripting files in their downloads folder, it will work right out of the box.
The scripting never runs twice on the same lot, so don't worry about having to take it out because of the non existent possibility of the scripted notifications running again. 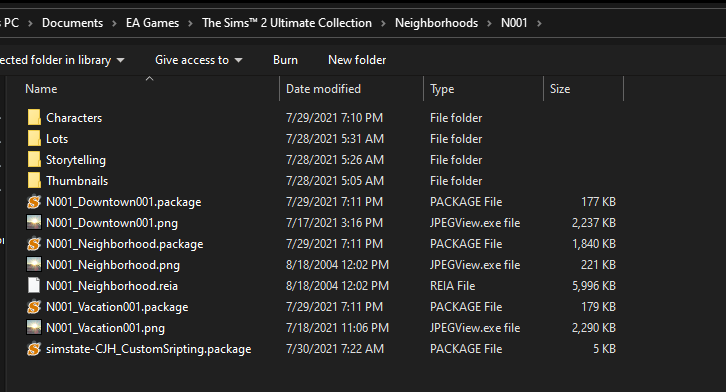 Huge thanks to Lazy Duchess for helping me expand the mod as someone who is a complete noob to BHAV modding. uWu Ly. Thanks to Chris Hatch for creating the original mod, and Max // cutupuss for information on the original unedited mod and his implementation of scripted events in his hoods. Blessings and peace. <3
Check out my upcoming dark mode mod for Sims 2!

Tutorials are basically one of the only threads where attaching 'templates' like you have, that this would be fine with.

Overall this seems like a really cool one! Certainly well documented, so i'm sure people would love to check this out!

Thank you for this, @redandvidya ! I will give this a try for sure! Very clear tutorial.

For those interested, Chris' original mod was here:
https://modthesims.info/showthread....184#post5557184
I will choose a path that's clear- I will choose free will
-RUSH- -RADIO- -EON- -ARCHIVES-
Simpeople and Me Archive- -11Dots Archive- My Sims World Archive
redandvidya
Field Researcher
DELETED POST
Original Poster
11th Aug 2021 at 8:47 AM

This message has been deleted by redandvidya.
Back to top