All I wanted was to have a nice meal and end my day with a bubble bath. 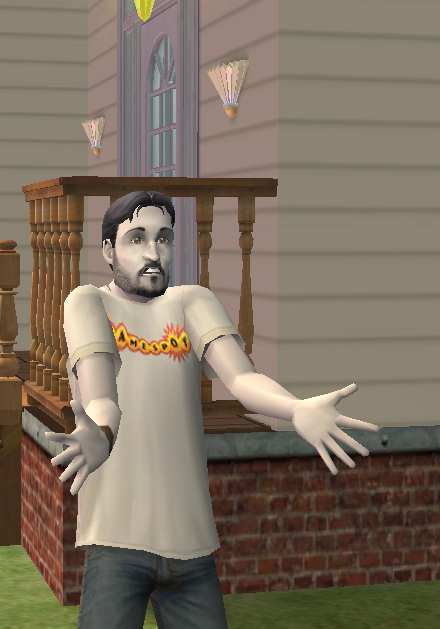 After another nerve-wracking day of work in a place full of backstabbers and brown-nosing parvenus, I was looking forward to spaghetti and a relaxing bubble bath. Little did I know that as soon as I walked through the house door, my nightmare was only beginning.

After changing into my PJs and setting the radio to college rock, I skipped into the kitchen. I eagerly swung open the fridge door.

The fridge was completely empty! No meat, no milk, no "food-ish products"...not even a packet of ketchup! I slammed the fridge door and desperately swung open every cabinet and drawer: not even a lone vermin scrambling about the utensils, if I still had any! What kind of a weirdo would pass up all the expensive furnishings and gizmos to burgle a sim out of all their food, drinks and utensils?

A watcher from a dimension with a sick sense of humor must have been in the room with me. Just as I was trying to convince myself that my mind-numbingly tedious life and my time-hungry job had teamed up to bring real life into my dreams, my stomach churned out a muffled growl.

"And next, the sink will probably be missing! After all, it's always dark before a rabid stray jumps out at you from under a car!"

I ran upstairs to the bathroom, hoping that I was wrong, so I could get at least a glass of water. Then I checked the second bathroom: not only were the sinks gone, but I would now have to have an accident just to relieve my bladder. All while smelling like that ill-mannered Nervous Subject, whom I had the misfortune of acquainting myself with at the shopping mall.

"Damnit, why am I always right? Why can't my predictions that bad situations only get worse be wrong and paranoid for a change?!? There goes my bubble bath..."

I would have called delivery or ordered groceries online, but I wasn't going to give that cosmic jackass the satisfaction of seeing me get beaten and robbed in my own home by a thug in disguise. Well, at least I was through having to deal with irritating people from work!

I had to answer the phone, no matter what the price would be. Waiting out whomever was calling would have been masochism and damn it all, I hate unpleasant things! When I answered the phone, whom else would it be but...

"Hi, this is Nervous. We met at the mall and I threw those water balloons at you in front of the sim you were flirting with, wasn't that incredibly funny? Your crush certainly though so, especially because they laughed the loudest every time!" When I actually answered the phone however, I immediately regretted it.

"...got you twice with the Ventrilofart-"

I was not going to stand there and exchange pleasantries with the town's pus-filled ass wart. Having much experience when it came to dealing with narcissistically inconsiderate time-wasters, I decided that the only way to teach this person to avoid me like the plague was to match inappropriate selfishness with an equal level of disregard for the person dishing it out.

"Oh, you think that's the worst thing that could happen? Honestly, I wish I could go back to that day and laugh with you, because, oh...I AM ABOUT TO BE MURDERED IN MY OWN HOUSE BY SOMEBODY WHO THINKS IT IS FUNNY TO WATCH A SIM STARVE TO DEATH WHILE WETTING THEIR PANTS AND SMELLING LIKE A GARBAGE CAN THAT'S BEEN KNOCKED OVER!"

I put my mouth a millimeter away from the speaker and screamed that last part as loud as I could, to thank Nervous for forcing me to choose between spending the last few hours of my life either enduring the ear-peeling peal of a telephone or having a conversation with the last person I would save in a zombie apocalypse. Both decisions required me to endure annoying sounds for more than an hour and would end in eternal silence. Nervous started to respond, but before he could, I immediately interrupted him.

"Some lunatic broke in and took all the food from my fridge, my sinks, my toilet and even my bathtub! I can only be grateful that they forgot the bed and everything else of actual value in my house..." Not pausing for a response from Nervous, I continued to ramble about today's events. "...I'm just so scared that the thief might come back, dressed as a delivery person and do terrible things to me! My stomach is already at its limit, I feel so faint..."

When I paused to breathe, Nervous cut in with, "If you're really starving, then you'd dig into a garbage can instead of whining my ears off." Eww! I was in critical condition, but that was just vomit-inducing. Surely Nervous was having fun again at my expense.

I snapped back, "Eeyoo! I may be starving to near death here, but do I look like a wild animal to you?!?"

When you pull a string coming out of a hole coming out of the author's back, you can sometime hear that doll say, "Ba Dum CHING!"
Advertisement
grammapat

Bizarrely funny! Hope you continue.
Stand up, speak out. Just not to me..
Tasia714