Hi there! You are currently browsing as a guest. Why not create an account? Then you get less ads, can thank creators, post feedback, keep a list of your favourites, and more!
Quick Reply Print version
Search this Thread
Replies: 9853 (Who?), Viewed: 507507 times.
Page 386 of 395
k6ka

Sims having a drink from the bar can converse with Sims seated at a dining table, even if they're not sitting together. 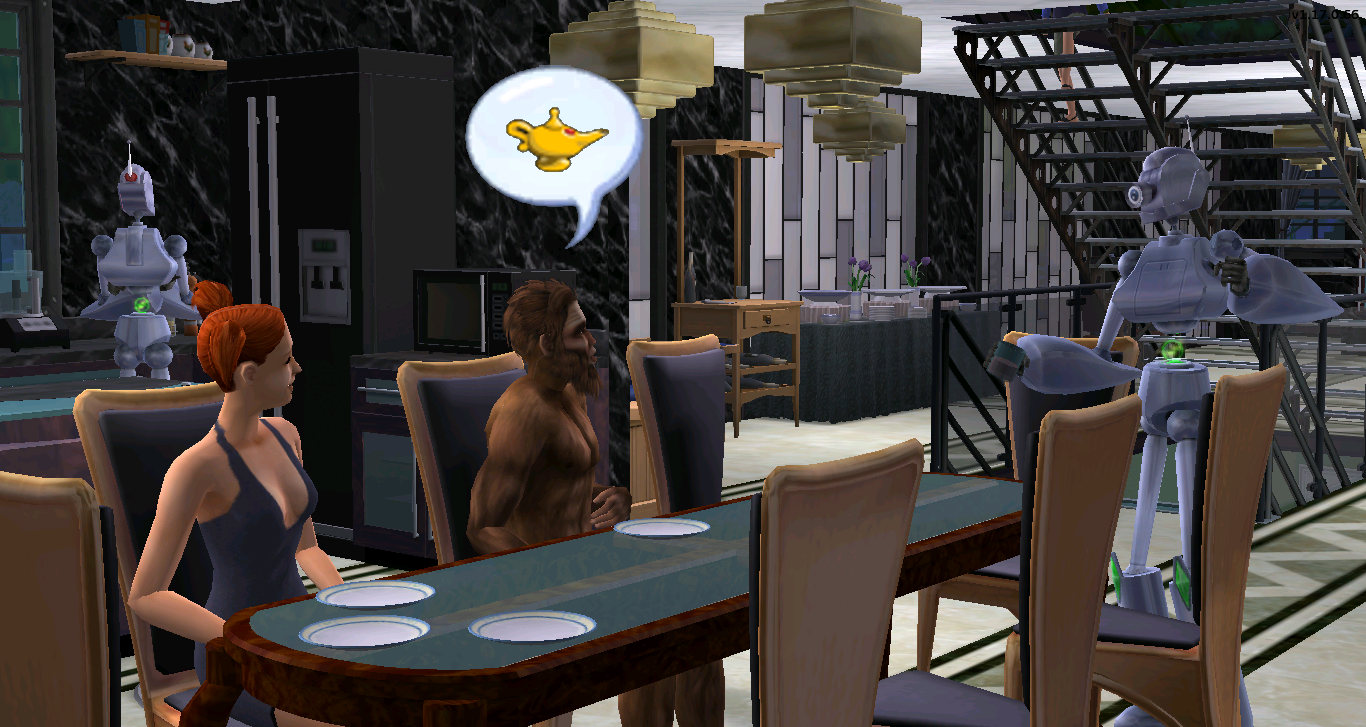 Double clicking on a neighborhood or a house/family makes you enter it without the popup window.
Pideli

The Main Function of the Triangle Flower is not for the diagonal wall but to make a Hybrid flower.
Peni Griffin

The main function of the triangular flowerbed is whatever each individual player chooses to use it for primarily.

I finally figured out the sweet spot for the "get in" action on beach lots. The click has to be at the point where the shore drops off, underwater - that's why spots that worked one time won't work in a rotated view, because it only looks like the same spot to me. This has driven me wiggy ever since I got BV, but no more!
Ugly is in the heart of the beholder.
(My simblr isSim Media Res . Widespot,Widespot RFD: The Subhood, and Land Grant University are all available here. In case you care.)
Pideli

I think they mean because you can't place it against a diagonal wall without moveobjects.
Omnia - Fantasy / Mythological / Medieval Hood
Ephemera MoreColorful - SimpleSkin Recolors
topp

Quote:
To make hybrid flowers, I just take a regular 1x1 flower and place it down. Then, I take the same flower only recolored, or another flower altogether, rotate it using ,. keys and place it on top of the first flowerbed.
DJ. who?
Essential mods, cheats, tips & tricks for The Sims: Castaway Stories || Felicity Island for TS2
lord is testing me
and i have not studied
simsample

Quote:
This is what I'm doing too; I gave up using the aspiration benefits in my main hood a while ago because I found sims had little motive decay. So all they wanted to do was the annoying things we don't like them doing (like congratulating each other over and over again!). Also, it got that I felt like they were all having similar wants, because of the secondary aspirations. Keeping each sim to a single aspiration makes them seem somehow less alike to me.
I will choose a path that's clear- I will choose free will
-RUSH- -RADIO- -RADIO- -EON- -ARCHIVES-
Simpeople and Me Archive- -11Dots Archive- My Sims World Archive
Angel Classic Rock Mix!

Yeah, a few months ago I upgraded my game to a harder version by doing that, and by making everything more expensive. Bills, services, college/education, and adding a tax system (and a president which the taxes are paid to every Monday). Now they actually *have to* earn money or they can't afford to keep their houses! I also decided that there's limited job promotions based on how well they did at university. In which they all use my Everything Major where they have to max all skills (starting from 0 with no help). The GPA also decides who the new president will be, and there's "merit points" added to the GPA depending on how many life skills they get during uni after they've maxed all skills. Those that don't manage the highest GPA can raise it afterwards by going to "komvux" (Swedish kind of pre-uni completion school for adults IRL) which costs money ofc. Or raise the skills at home but for a higher cost.
It really is fun at another level now.

Unrelated but I also discovered what a great impact having a beautiful garden and taking care of that does for the fun of playing.
Omnia - Fantasy / Mythological / Medieval Hood
Ephemera MoreColorful - SimpleSkin Recolors
AnMal

Pideli, you've gone and ruined things for me now! I've been so happy with the added hardships I've managed to give my sims, but now I'm gonna have to try your uni system and the merit points and above all komvux - at least in one neighbourhood. How can I deny my sims the pleasure of bettering themselves at komvux now that I know other peoples' sims get that?
Pideli

Haha, glad to give ideas. Oh and I really gotta update my Everything Major here D: I've really perfected it over the years so it's more balanced now. All semesters are about the same difficulty and now it's possible to beat it without using the thinking cap! (But I still use the motive lifetime bonuses on uni only.) But I'll have to translate it so I've been procrastinating

Btw my merit point system gives 0.05 points added to the GPA per life skill, so max 0.3 is possible. So the max possible GPA is 5.3, which the current president has. (Not sure if GPAs are shown the same in a non-Swedish game, probs not but 5,0 is the max from the game, to compare.) And just to be clear, that is just written in their bio, I actually don't know how to change the actual GPA, not sure if it's possible.
Omnia - Fantasy / Mythological / Medieval Hood
Ephemera MoreColorful - SimpleSkin Recolors
guirnaldas
Lab Assistant

Today I learned that they don't have network signal on the hobby lots.
happygoluckydog

Apparently sims can bring back pizza from class? I just had Castor Nova bring back a pizza on his way back from class.
wickedjr89

Sims in Greek Houses will go off lot "on campus" and bring back pizza.
My Simblr
They/He
Zarathustra

A small rounded hill thoroughly covered in the pine needle terrain paint absolutely works as a haystack for a farm lot.
Welcome to the Dark Side...
We lied about having cookies.
monijt1

The Headmaster will complain about being bored, hungry, and will actually leave early, if you don't interact with him. I rolled a scenario that called for standing the Headmaster up

Apparently when you throw a party, visitors can take bubble baths, grab snacks from the fridge, and even sleep in your bed!
PacMani

If this one sort of palm trees is on fire (like from a lightning strike or whatever), they each look like huge burning crosses... anyone else getting weird feelings about that?

Screenshot if you really dare... :/ Holey cheese. I never noticed that but - yeah, the visceral reaction to a burning cross kind of swamps any rational notions of optical illusions and so on.
Ugly is in the heart of the beholder.
(My simblr isSim Media Res . Widespot,Widespot RFD: The Subhood, and Land Grant University are all available here. In case you care.)
PacMani

Yeah, I hope that screenshot is not too offensive... let me know and I remove it (or just remove it if you're a mod and would prefer to not have it here). Sure, the flames do wobble a bit, but they always stick to this placement - as if the devs really wanted to light up the upper wider part a bit more, but just unintelligently placed two fire emitters at the sides without thinking about it further....

Inb4 Back On Topic:
- Serious Sims autonomously put soap into fountains. Playful's don't. Bug or one of my many weird mods causing this?
- If you keep prank calling your butler at night, he comes back and tries to serve you food or freezes at the street.
- Got my game into spawning strays with the Human species. You know when those abominations suddenly float into the view and then trigger loads of error dialogs not finding their animation bones. (No clue how this happened though, I disabled all random Sim spawns with the Insimenator plant, but the game thought it knew better and started creating these not matching any category suddenly...).
- Broken Servos or Sims on a Magisplay Tray are not completely frozen and still nod their head and comment on some nearby actions, like two other Sims making out, getting stuck with the facial expression made to it then.
Pideli

Lectures are a scam for the most part. 2-3 hours and the performance bar barely moves up. You can get a whole lot of assignments done in that time instead.
Omnia - Fantasy / Mythological / Medieval Hood
Ephemera MoreColorful - SimpleSkin Recolors
kestrellyn
Alchemist

They don't cost fun, though, and you don't have to deal with the sim while they're at class. Sims just have to go to class twice to get enough grade points to pass, and class is easy and hands-free.
My favorite piece of feedback on my mods
simmer22

Don't put sims on Magisplay trays. They can potentially disappear (had that happen with a sim once, with no way of getting him back, and I tried pretty much everything - he was completely gone from the lot). If you're posing sims, use SilentLucidity's OMSPs instead, those are safer. Not sure if unactivated servos are safe to place on the magisplay tray, but active/broken ones probably aren't.

Sims continue to move while on an OMSP (or the magisplay tray). I use the Freezer Clock (needs AL) to keep them from moving, especially if it's for pictures. it's a download from here.

I've never had the same issues with the OMSPs as the magisplay tray (sims will jump out of position occasionally if posed, but the Freezer Clock stops that from happening. If I need the sim to be moving, it helps to stop and restart the pose/animation).

(A couple of the other things sound a bit like you might have some issues in your game).
My site - TS2 baby stuff - ToU

I think you must have modded that, Pidelli. If the grade bar is sufficiently open, mine are generally passing after a single class. A single class and a term paper (which I only make them do if they have the want and all the skills) and they're on the dean's list.
Ugly is in the heart of the beholder.
(My simblr isSim Media Res . Widespot,Widespot RFD: The Subhood, and Land Grant University are all available here. In case you care.)
Pideli

I am using my custom major but it's cloned from literature and I didn't change how much performance is affected by going to class. Some semesters give a lot of performance boost by going to class and some give barely any, it's so random, I'm not sure what's going on there. I let them go to one class in the beginning to test, and if they don't get a good boost, further classes are a no-go the rest of the semester.
Omnia - Fantasy / Mythological / Medieval Hood
Ephemera MoreColorful - SimpleSkin Recolors
Back to top