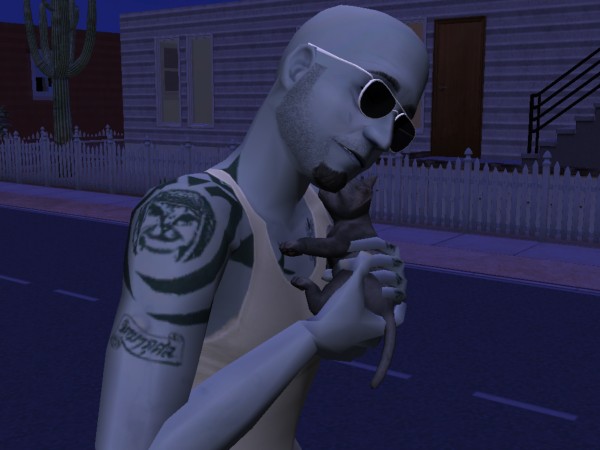 Okay Limecat! I get it! You're not very happy about the new cat, Chumpkins, but you don't have to possess Jerry's right shoulder like a creepy poltergeist!
mozgun

I'm not sure I trust her to drive the carpool...

I took a picture of him getting fat and it looks like he ate a hula hoop.

Because walking is too mainstream.

I'm not sure why my pictures from the ingame camera turn out so crappy.
Meh.
M.M.A.A.

You need to change the camera settings in the Options panel, under Graphics.
Please, call me 'mmaa', saves time.
Learn how to use your neighborhood (terrains) efficiently!
How to avoid neighborhood and game corruption?
The Customized Sims Wiki
mozgun

You're welcome!
Please, call me 'mmaa', saves time.
Learn how to use your neighborhood (terrains) efficiently!
How to avoid neighborhood and game corruption?
The Customized Sims Wiki
Peni Griffin

The Sims2 people are getting way too lax about posting pictures! C'mon, guys, Fivey and I can't do it all ourselves (plus, it's embarrassing to get on here and see my own name everywhere). Hi Thyme goes to his cat for sympathy. Unfortunately for him, she's a cat. And she's hungry. Though her bowl is full. She wants people food! How dare he be gone so long when she's hungry!? Peter: What kind of rock-and-roll degeneracy are you raising that boy with? He's growing up to be a sissy!
David: Actually he never talks about make-up at home. I think he picked it up from your neighbor's boy. Relax. He is who he is. Daisy gets a free taste of the Ottomas nosy when she pops during her in-laws' visit. The Beech family of Widespot: bonded together by their love of music and dance!
Ugly is in the heart of the beholder.
(My simblr isSim Media Res . Widespot,Widespot RFD: The Subhood, and Land Grant University are all available here. In case you care.)
gulhare
Instructor

Oh Peni Griffin. Id better support you and Fivey then (so you can post more without embarrasment?!)

Here is a recent event from Madewee Neighbourhood, in wich I discovered the reason why this dedicated father was missing from the actions downstairs (at this particular sim day, 2 infants and 2 toddlers + a very pregnant wife....twins of course).

Sven Vu : Hello! There is a huge bottle in my way! Help! I cant get off this chair with a bottle behind me! Ignore the gridlines. I decided to take a pic just because I found it so funny, and I was already in buymode. Didnt plan to post it you see

"No, listen to me! I should ground you for this! Why didn't you ask to go out? That's what the other two would do! You're older, you're supposed to be more responsible!"
"Dad, please, you should turn around."

"Oh."
"See? I told you."
"..."
"You know, that was actually kind of cool."
"Just like her old man."
Simblr.
Asks are always open, even to anons. I will always reply to asks, and I do my best to be cordial/less snarky than usual.
gummiworm My family's new adopted baby, Chester. Who seems to have come from a scary scary place. I'd like to say things are looking up for Chester but... I don't think that will be the case.
My Simblr
ohgreatone22 There was already a gardener on the lot and another one spawned. I don't know why. It's okay now, though. Please, call me 'mmaa', saves time.
Learn how to use your neighborhood (terrains) efficiently!
How to avoid neighborhood and game corruption?
The Customized Sims Wiki
roxmaniac

Kill it! Kill it before it breeds!!

"And this is what happens when we agree to help Alex with his science project"
Frankly my dear I'd rather be playing sims :P
ohgreatone22

What happens when freewill and ACR mix.
Flarz
Field Researcher
#165 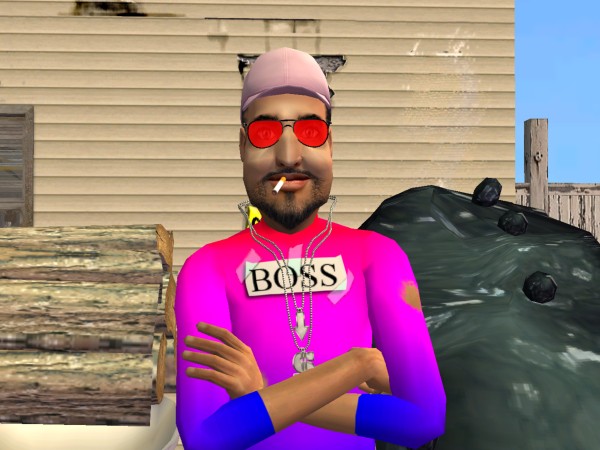 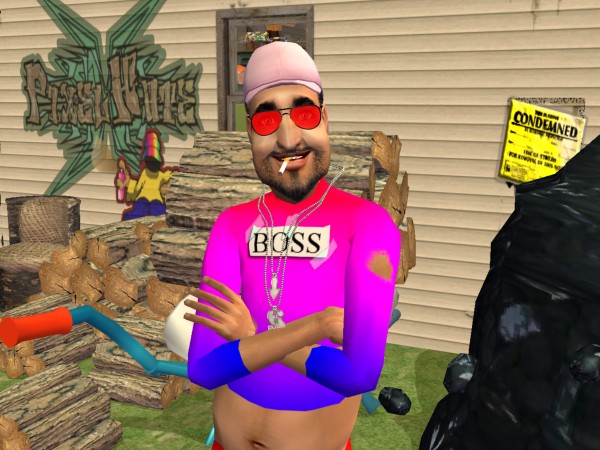 If you leave me now…
Flarz
Field Researcher
#167

Call a mechanic next time... 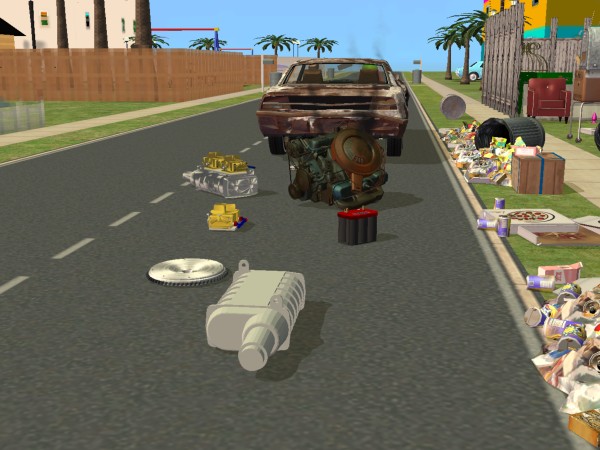 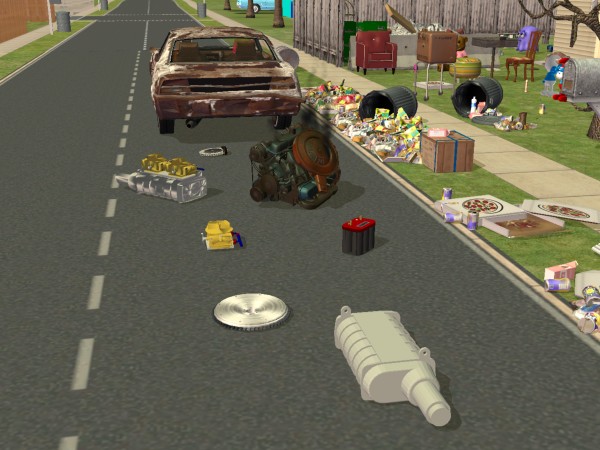 Eh, what does he need a mechanic for? Duct tape's cheaper.
Today's theme is Fun with Hacked Objects I just added a bunch of food options as part of a set, and one of them was "beer." So I decided to let Pollux Stacks have some on his first day on campus - it's the sort of thing boys do. I didn't realize that a single beer was enough to make a sim belligerent! He hadn't even met this stalky professor when he chased her all the way around the house to attack her! Perhaps she'll think twice about being so stalky in future. Hurray! The invisible pond allows ocean fishing after all, and Naomi's got a nice big fish to store in the cellar of her vacation lot. But wait - what's her wife Justine doing? She appears to be fishing, but nowhere close to the invisible pond. Yup, that's what she's doing. I guess when the creator advertised the pond as a "fish anywhere" mod, he wasn't kidding around!
Ugly is in the heart of the beholder.
(My simblr isSim Media Res . Widespot,Widespot RFD: The Subhood, and Land Grant University are all available here. In case you care.)
DrowningFishy

Magic Nanny
Disclaimer: I am just being a goof ball, please ignore me if offended.
gulhare
Instructor

Or perhaps magnetic, and she just fed the baby some super strong magnets

For storytelling purposes, I wanted to recreate a social worker, so I went to the Burbs and killed off John and Jennifer. As expected, Grimmie showed up; what wasn't planned was that he parked his bony butt down on my couch and started watching the weather channel. No biggie. Now, I've recently downloaded hacks that seem to cause a delay between parent death and social worker arrival (in previous runs with the Ottomases, the social worker would appear within seconds, and I wouldn't get a finale message like I did with the Burbs), which may or may not account for what happened next.

It took about an hour and one "don’t leave Lucy at home" message before the Social Worker arrived. I took some screenshots of her for reference and let her do her thing. Her first action? Stand near the Grim Reaper.

I can only assume she was trying to lecture him, and I have no idea if such a thing would have been safe for the game. Thankfully, Grim just kept on watching TV, so the worker gave up and took Lucy away. I got the orphanage message...and the game kept on playing, because Grim was still there.

He stayed long enough for the welcome wagon to arrive, although he never answered. He stayed throughout the night, even in a rainstorm.

And then when morning came and I got a job alert for the deceased John, I decided to just quit, because I was starting to realize some weird stuff was going down.

I now wonder if Grim had any motive decay while he was there. He didn't pee himself or pass out, so I guess not? If Grim dies, does another instance of him spawn, and do the two Grims proceed to have a romantic dinner set to the music of my game install grinding to a fiery end? I wasn't exactly willing to experiment with this. Besides, I was baking cookies and I needed to attend to that.

At least I backed up my important saves before doing this.
Flarz
Field Researcher
#172 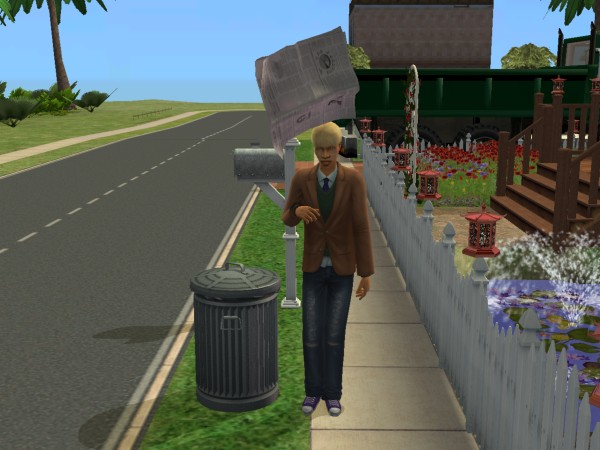 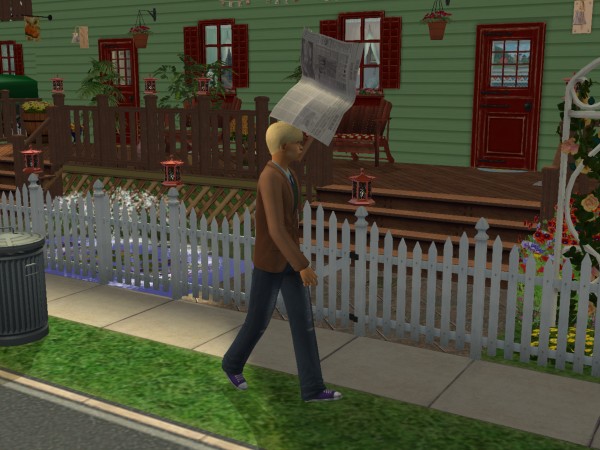 Caring about what's going on isn't a part of illegal alien maid Kenya's job description. If Old Mrs. Mann and Young Mrs. Mann want to fight it out, that's their problem; she's just here to clean the place.

But then canabalism and random appearing arms does run in the Curious family.

It seems like the Grimmy's robe is water soluable.

This is a NPS. She had just eaten when she went back into the kitchen got her self a plate of food sat down at the table and SPLAT! She's still there sleeping; I consider her a decoration now.
Disclaimer: I am just being a goof ball, please ignore me if offended.
ohgreatone22

Somehow Tabitha Goth became glitched when she worked out on the exercise machine:

She was still glitched when she practiced painting:

I finally had to force an error on her to reset her.
Back to top