The Beakers had a baby boy that I named Bjorn from Loki's father. Seeing Loki and Circe with the baby, they look like a normal family but they aren't! When I first found out about how evil Loki is (back in the day when I started to play the Sims 2) I couldn't believe it because I love playing the family in Sims 3, Aurora Skies. Loki is so sweet as a child and he starts the game with level 10 writing skill. Everything he writes is a freaking best-seller, I love it and he loves it too... What happened to you Loki???

Going back to my Sims 2 game, after little Bjorn was born, Loki rolled the want to get an easel and he goes autonomously to paint, rolling wants to level up his creativity skill. Can I hope that the baby made him to "revert" to his Sims 3-self (creative and non evil)???
IgglyBuff

I restarted Pleasantview, because I have a habit of doing that, and Dina and Mortimer had identical twin girls. Ignore the looks on their faces, they're just angry they can't go down the stairs. :/ 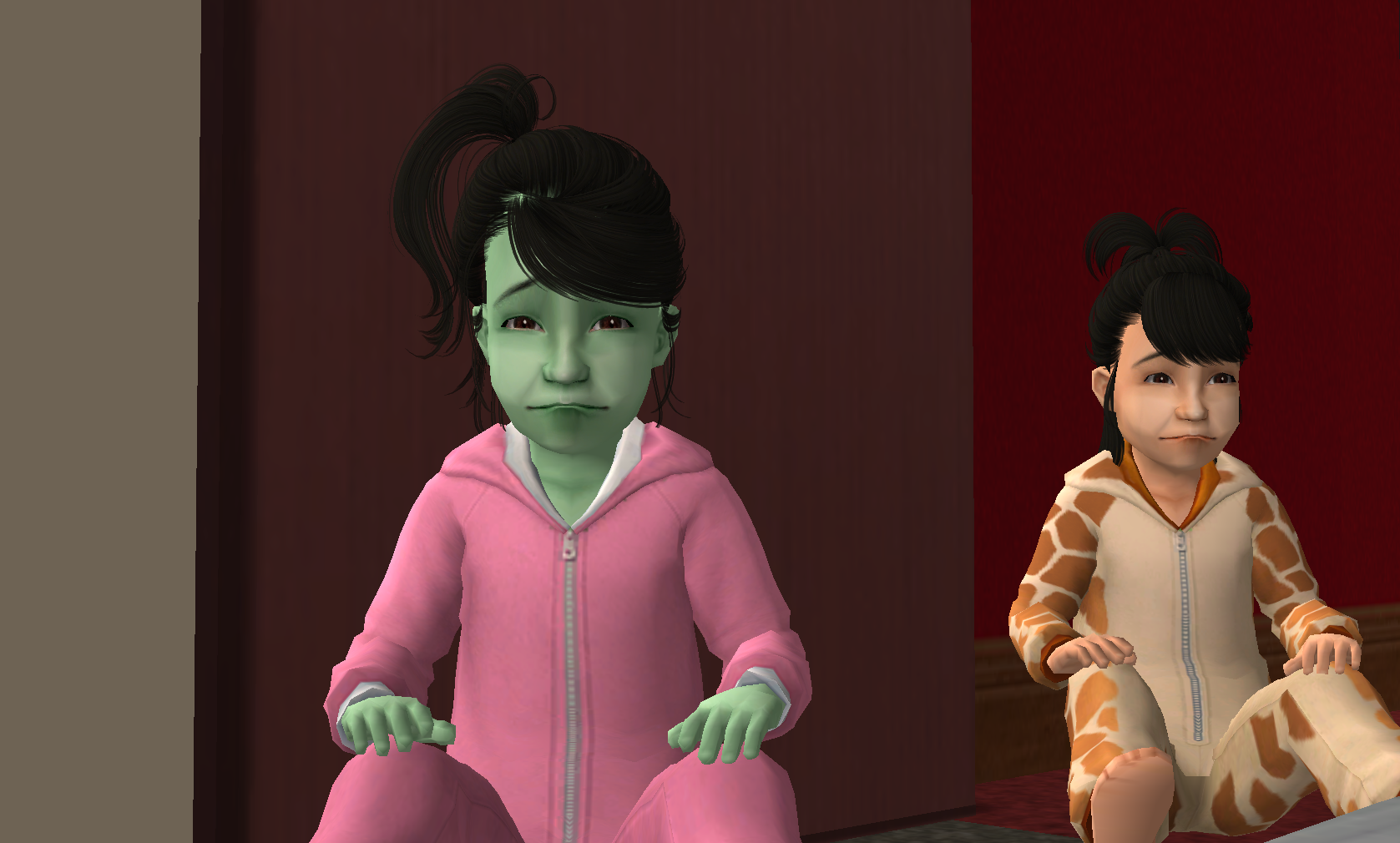 Don surprised me in this hood. It's a mini-megahood (Pleasantview, Riverside and Downtown) that I call Donville because I wanted to see how many children could Don have. That's the reason why I made Kaylynn and Bella playable (and maybe that's the reason why this hood is unplayable now

).
The first child he has is Parker Langerak (I love Parker in the Sims 3 and I always find a way to bring him in sims 2 too!). Kaylynn lives in one of the trailers in the same street with Brandi Broke. Whenever I played Kaylynn and Parker, Don visited every freaking day. He didn't even need to be invited in the house, he just barged in and started to play with his son. The weird thing was that he completely ignored Kaylynn as if she wasn't there at all

And he even attended Parker's birthday party (screenshot 4). Brandi Broke and Isabel Brooklyn were also there (you can see a part of her head behind the fridge) who are Kaylynn's best friends. Both women totally ignored Parker's birthday and they spent the whole evening fawning over Don, the other surprise was that Don was only focused on his son and the ladies (including Kaylynn) got mad at him

Quote:
Shouldn't be. Did you run it through hood checker?


Don has always been like that, in every restart lol. I always give him a secondary family aspiration but I suspect he might have a hidden family aspiration maybe. He always seems happiest in an open relationship with another romance/family sim, where they have a few children but aren't tied down to just each other. In my game he ended up with Gearhead Calista Fusch.
~Your friendly neighborhood ginge
natbsim75
Field Researcher
#980

Bigsimsfan12
I did run the hood checker and I... don't understand its report. I made a thread on the help forum about it. It's this hood and one more which are my favourites and the game crashes when I try to play there. I can play in all my other hoods just fine...

About Don Lothario, he (and Don Baxter in Riverside) are both wonderful fathers when they are not... married or tied down to one sim. They like multiple open relationships but they are so good with their kids. In one of my hoods, Don Baxter is single again after his ex-wife Sarah divorced him (because he freaking cheated right in front of her!) and he lives alone. He always rolls wants to call and chat with his sons whenever I play him and when I play Sarah's household, he always "happens" to walk by. One day his sons (they were both teens) were dancing the smustle and he just got into the house univited and danced with them. It was cute and hilarious in the same time...
simsample One of Sim Sample's kids: Only one so far to have red hair!
I will choose a path that's clear- I will choose free will
-RUSH- -RADIO- -RADIO- -ARCHIVES-
Simpeople and Me Archive- -11Dots Archive- My Sims World Archive
Back to top