Sims can dream about hobbies, and they gain a tiny amount of enthusiasm in that hobby every time they do. Not sure if they can dream about any hobby, or only hobbies they already have some enthusiasm for. If they dream of a hobby that they already have max enthusiasm for, they'll get in the zone for a split second, complete with that 'vwooom' sound effect. Took me a minute figure out where it was coming from with everyone in the house asleep.
SIMposiast
Instructor
#9302

If you get a single adult female sim pregnant so late that she becomes an elder before the baby ages to toddler, the baby will NOT appear on the loading screen.

I don't know what would happen if there were other sims in the household and if they were unrelated. Should explore other household configurations.
kestrellyn
Theorist

I'm pretty sure I've done exactly that and that baby showed up just fine.
Peni Griffin

The teen "squeeze" animation includes the recipient's hands fluttering around the giver's hips.
Ugly is in the heart of the beholder.
(My simblr isSim Media Res . Widespot,Widespot RFD: The Subhood, and Land Grant University are all available here. In case you care.)
AndrewGloria

Quote:
Oh! Do adults not do that?

(Kind of gives away that I play more teen romance than adult romance!)
All Sims are beautiful -- even the ugly ones.
My Simblr ~~ My LJ
Sims' lives matter!
The Veronaville kids are alright.
monijt1

Supposedly, a Sim who has passed out from the heat can catch on fire if passed out for a few hours. Oops.
Currently Playing: Sims 2 Story Progression Mod by Lazy Duchess
On Hiatus: Beginning of Strangetown by Marka93

If two sims are on a date when one has to leave for work, the date will end itself automatically rather than leave the non-working participant stranded on their own. I was going to have Crystal Vu play hooky so she could continue her date with Circe, but the game had other plans.

If two sims know how to breakdance because they learned from the breakdance NPC, they can challenge each other to a breakdance duel either by pie menu from the player or autonomously!
Uh oh! My social bar is low - that's why I posted today.
My SIMBLER | SIM WHIM | SIM VIDS | SIMS 2 STORIES | SIM PICTURE-TAKING TIPS | MY HOOD | SIMSTAGRAM | TWITTER | TWITCH
CrystalFlame360

Quote:
I dont think so. If I'm remembering right, the adult "squeeze" interaction has both the hugger and recipient just rub each other's back.
When a game is predictable, it's boring.
That goes for any medium that isn't life.
That's why The Sims 2 is my favourite sims game.
It has elements of unpredictability and everything feels more involved.
The Sims 4 is another story altogether...
FranH

That with enough body points, an ice skater can do a solo en pointe pirouette!

Lynne Meers did it not just once, but three times while ice skating. I think she was just showing off...
Receptacle Refugee & Resident Polar Bear
"Get out of my way, young'un, I'm a ninja!"
My downloads of various stuff: https://www.mediafire.com/#myfiles (including funerals!)
CASnarl

this game came out how many years ago and this is the first time I've ever seen anyone want a curtain.

The Pleasant's are broke though 'cause they got Angela a dog for getting into private school. So no curtain, sorry Daniel.
topp

Sims seem to have precognitive abilities, specifically when it comes to predicting appliances breaking down. While working on her next novel, Tina Roennigke rolled a want to call a repairman, prompting me to look all over the lot for something broken... only for the computer to immediately start smoking and sparking the second she stepped away to do something else. I guess she saw a lot of error messages popping up while she was trying to work.

I wish fixing broken computers IRL was as simple as calling a repairman to go at it with a wrench for twenty minutes.
Sunrader

I just figured out I can control the state of lights on a lot by whether I place them in the dark or the day. So like on a community lot in build, where I don't want to bring any sims... I used Moo's Turn All Lights on for the real lighting, but I wanted a couple lamps to be off, just deco, essentially. If I place them during daylight they will be off, if at night they will be on. Because I was toggling back and forth to see how the lighting looked, that took me a while to figure out. :P
Simblr / Easy CFE Dummy Level Tutorial / SunraderSims.com / Autonomous Fire / No Hobby Decay / Changing the 3D Models of Favorite Mods
simsample

Quote:
Works for me.
Except I'm the workman. And the wrench is a hammer.
I will choose a path that's clear- I will choose free will
-RUSH- -RADIO- -RADIO- -ARCHIVES-
Simpeople and Me Archive- -11Dots Archive- My Sims World Archive
sturlington
Forum Resident

One of my Sims was taking a sink bath in the kitchen when a fire broke out right next to him. At first he was jumping and screaming in his altogether, then he stopped, looked down at himself, and gave this nod and smile like he thought he was looking pretty good before he whirled back into his clothes.
NatteryakToad

Today I saw a want I'd never seen before. It looked like an adult and a child (one blue, one yellow) reading a book together. It was in the process of rerolling as I hovered over it, so I couldn't get any text. I have a mod which lets children read to toddlers, and multiple children/toddlers listen to a story, so perhaps its part of that? The sim who got the want is a YA who has child-aged siblings.
♫Cuz I don't have a home in this life, I have to roam. Got nowhere to lay my head, so I'll follow you instead, and set my gaze on the place I'm going to. Til then I'm homeless, but I'll roam with you...♫

The basketball court "rug" also includes the striping for a volleyball court... why didn't we get volleyball back in TS2? They had it in TS1 and it was awesome!
Welcome to the Dark Side...
We lied about having cookies.
cosmaline
Test Subject
#9320

Nonplayable wolves can howl when sims play instruments! I put the piano outside so Ophelia could try to busk for walkbys (no luck so far, they don't even react), and a wolf that happened to be on the lot sat down next to the piano and howled for a good hour or two. When I sent Ophelia back inside, the wolf wandered off to resume its usual walkby-pet activities (tearing up the lawn, mostly).
AndrewGloria

I've discovered just how messy some Sim children can be when they eat. Little Mitch McLeish clearly likes spaghetti. He was the first to sit down at the table, and he immediately started stuffing the spaghetti into his mouth as fast as he could. He not only used the fork that he held in his right hand, but he also stuffed food in with the fingers of his left hand. By the time anybody else joined him at the table, he was almost finished. I've never seen food disappear off a Sim's plate so fast. Eve Marsden, who cooked the meal, and who only has two Neat points herself said, "It's a pleasure to make a meal for someone who obviously enjoys it so much."

I also rediscovered that when two Sims do a slow dance together, sometimes one of them will do a pirouette while the other one holds up their hand. I have seen this before, but it was years ago. This time it was two gay teenage boys, Alan Orr and his boyfriend River Jenkins, on what was likely their last outing together in Baldrair Bluffs before they go to university. Alan pirouetted while River held up his hand, and as Alan spun back round to face his partner, he smiled adoringly.

All Sims are beautiful -- even the ugly ones.
My Simblr ~~ My LJ
Sims' lives matter!
The Veronaville kids are alright.
BlueAlien
Scholar
#9322

I don't know how I never noticed this before, but children doing their homework at a desk don't actually do the work on the desk: they pull it forward so they can reach it, and end up working with it suspended in midair!
CASnarl

Sims seem to be incapable of walking through the space between a dog and another sim who is playing fetch with the dog. As shown by Cyd Roseland who I've had to redirect to throw away his tv dinner TWICE now because he first got stuck when Porthos was running after the stick and then tried to go around but got stuck AGAIN when Porthos ran back to Mortimer and they stopped 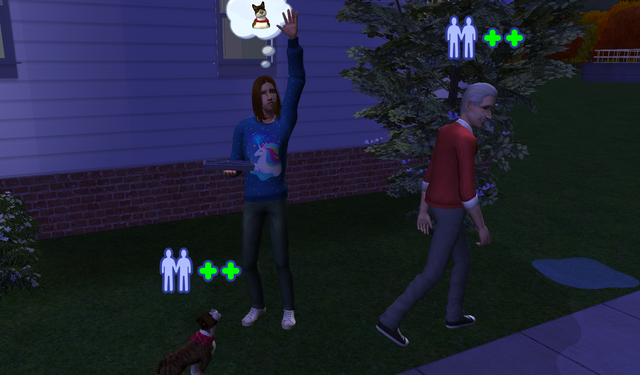 There's probably an invisible object there that they can't walk through. A lot of interactions will create a marker that tells the Sims where to stand, blocks off a set of tiles etc. Then it's deleted when the interaction is finished.
Tumblr

Can't believe you expect Sims to either duck at a flying stick or wait for the others to pass through before throwing it to the dog... That's simply too much to process. If they could do that themselves, they wouldn't need us as their gods.