Unfortunatly it didnt turn out as good as i wanted in the the end all the guests didnt show up and the brides dress wasnt as OTT as I wanted, but it was still fun to do!

So without further ado, let me Present to you the wedding of

Two of the guests that did show!

Sarahs a bit of a contorinist in all that tulle!

This picture is a bit old, but I figured I'd share it anyhow

Grimhild Subject and Siggeir Beaker had originally planned on having a big, fancy wedding, but decided against it once they realized what an incredible nightmare it would be. First her dad and his parents would get in a fight, then her grandmother would join in, and it would all end with her grandfather having to work on his vacation.

So, they decided on a private ceremony in their new house. Even though it wasn't a formal occasion, Grimhild still wore her grandma Olive's white wedding dress.
DrowningFishy

For some odd reason I have always liked this picture. In the background are two of their children ( from right Living, Chase, and then chase's GF and future wife at the end)

PS: If your wondering the house itself is more colorful because I just couldn't decide and I had new things to play with. XD This isn't the worst you should see the kitchen.
Disclaimer: I am just being a goof ball, please ignore me if offended.
ekrubynaffit

Introducing the new Mr and Mrs Patch, (should have kept it as Smith!)

Even better than cake, some Grog!

Smustling it up (love Jays face, looks so competitive!)

Im starting to branch out in my game, so took control of Count Hayden Kimbrell and he's created his own vampire clan, so naturally had to hold a wedding for his three brides!


The first you will recognize (if you have seen some of my other wedding pics) as Jessica Brown. Poor poor innocent Jessica Brown, went out on the town....and never came home!! She is now a creature of the night, the first of The Counts wives

The second also features in a wedding, She is Beth Macdonald, younger sister to Gypsy bride Sarah Macdonald. She snuck out on her 18th birthday and ran into The Count, now the second wife.

Last, but certainly not least is Candice, I dont recall her last name, she was walking past one stormy night and The Count took quite a fancy to her so she became the third wife.

The count and his Bevy of beauties, ready to stalk through the night (though I think Beth needs a lesson in stalking!)

And theres the bite, I think she will just become a minion though, 3 wives is enough for any sim including a Vampire! Surprise wedding!
Not the least of the obstacles in the way of Luz Iana's marriage to Billy Ghote has been his reluctance to go through with it. He likes shacking up with her, eating her cooking, letting her take care of the budget, and telling her and her last remaining son at home that he's got "a gig" when he wants to vanish for hours in order to wine and dine somebody hotter. Okay, yeah, he got her pregnant, but that's her fault for not taking precautions, right? But when he meets his (also pregnant) daughter while out on one of his side dates, a combination of her disapproval and all the hormones in the air makes him suddenly feel like settling down. His daughter, who has never approved of his lifestyle and moreover is a close friend of Luz's daughter, seizes the moment and tells him she'll take care of everything - just get Luz to St. Elvis's Wedding Chapel tonight!

Luz's feet feel about three sizes too big, she needs to pee, she's starving, and she may fall asleep in the car on the way home. She doesn't remember the last time she was so happy.
"Ohcrapohcrapohcrap," Billy thinks. "What am I doing?" But then he hears his daughter singing in the background and he knows. He's winning his daughter's respect back. He's marrying someone who thinks the world of him. He's giving his baby a father.
And he'll still have a job that can explain all kinds of weird hours. He'll just have to be extra careful.

Her son Lucas, who left for Sim State shortly after Billy moved in, expresses his satisfaction. "I got to tell you, I thought you'd no more go through with this than an elephant would go through a turnstile. I'm sorry I misjudged you."
"Think nothing of it," says Billy magnanimously. "I understand. Your own father callously deserted her, after all." (Hey, it wasn't Lou's fault I decided I wanted a single mother and deleted him in CAS! Have some respect for the never-installed, there.)

The management has provided cake in addition to the buffet. There's some sort of custom to go with it, but Billy misses her mouth trying to feed it to her and they both collapse laughing. Luz is getting a little hysterical. "Bed," she laughs. "Bed! Take me home. Everyone, thank you for coming, don't stop the party, but I have to sleep!"
That's her oldest son Luis, newly graduated, with his back to them. He's kind of conflicted about his whole Guasimalan heritage, but that's not why he's in everyday clothes. He had a kitchen fire earlier, after job-hunting, and his only suit reeks of smoke and flame retardant. IIRC, he's playing kicky bag with his girlfriend off-screen there.

"So - the surprise - you don't mind not planning your own wedding?" Damn, she looks good! Exhausted, but good.
"It's the best surprise I ever had. I wouldn't change a thing, except for being too tired to have a wedding night."
"Every night is a wedding night with you, my light!" At the moment, he even believes it. After all, to be a good salesman, you have to believe in what you're selling, at least long enough to close the deal.
That's her youngest, Lisandro, going in through the back door in the distance. My pictures that included her daughter Lourdes turned out unsuitable for posting, and I never got a shot with his daughter in it at all. She went home early due to pregnancy-exhaustion, though an even more pregnant friend stayed the distance and partied down to the DJ booth on the outdoor dance floor. But you've got to figure, even with all her connections, it took some hustling to throw this bash together in a few hours.
Mrs. Crumplebottom crashed the party, but Luz was just too tired to give her the satisfaction of berating people for public woohoo.
Ugly is in the heart of the beholder.
(My simblr isSim Media Res . Widespot,Widespot RFD: The Subhood, and Land Grant University are all available here. In case you care.)
Liv Lukas
Instructor
#261 It was so funny that the Sim in the back fell asleep.
Liv Loves Simming: http://livlukas.tumblr.com

Who doesn't love a backyard wedding right next to the street because someone has been too lazy to build a town hall in Darlington?

And all the Naaru say I'm pretty fly for a Draenei!
LiveJournal - Tumblr
DigitalSympathies

My legacy's twins have their weddings!

Riverblossom Hills has had a couple of weddings.

Cleo showed up and joined in. Alexandra and Jules are sporting the mother-and-daughter look (in fact I can barely tell them apart).

Then we have Leod McGreggor's marriage to Elizabeth Hughes. Cleo was kinda miffed at this turn of events and had been on the way to kick the trash can when she just sauntered in and grabbed a drink out of the fridge.

It wasn't really a party, but Leod invited Gabe and his wife and daughter over anyway.

The wedding of Korydon Gonzaga-Broke and Solstice Fairchild. They married young, so their wedding was a smallish affair attended only by their families and without snappy tuxes and long, white gowns:

Q: What do you get when you blend a family of Aliens and Plantsims?
A: A very cute wedding

Elliot Stargazer and his little alien butterfly Polly married Marigold Gardener and her little sprout Terran. Get them here. The family has since added a pair of boy/girl twins by natural birth, so the family stands at 3 green sims and 3 normal sims.

New! Fully Renovated Pleasantview!
Like my work? Help me make a difference!
Liulai Apparently, she focused on the money more than the man

Please, call me 'mmaa', saves time.
Learn how to use your neighborhood (terrains) efficiently!
How to avoid neighborhood and game corruption?
The Customized Sims Wiki
Phaenoh

The Goth Wedding, Alexander and Estella. She walks down the aisle, kiss, and face their guests as man and wife. Their church is available here. 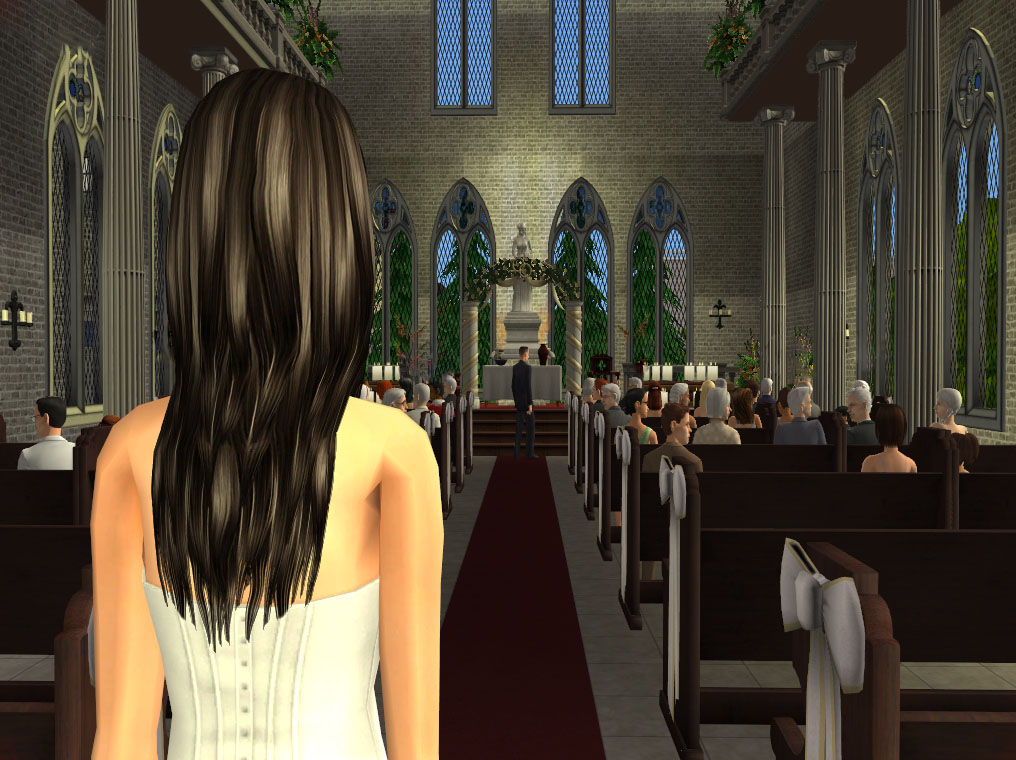 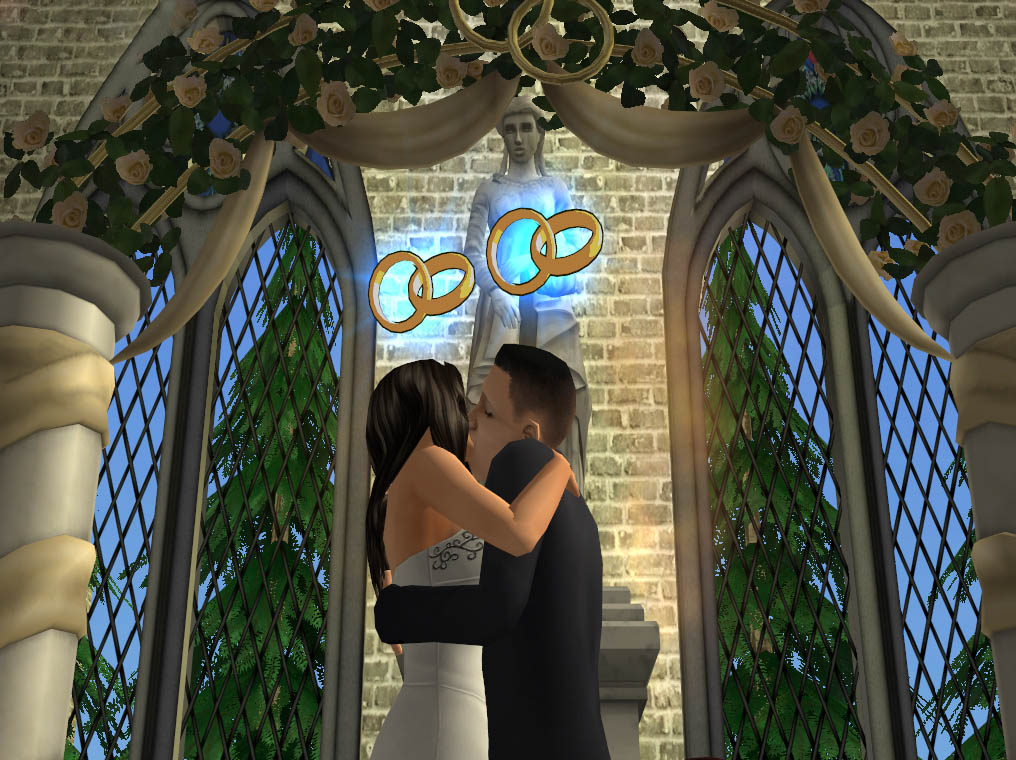 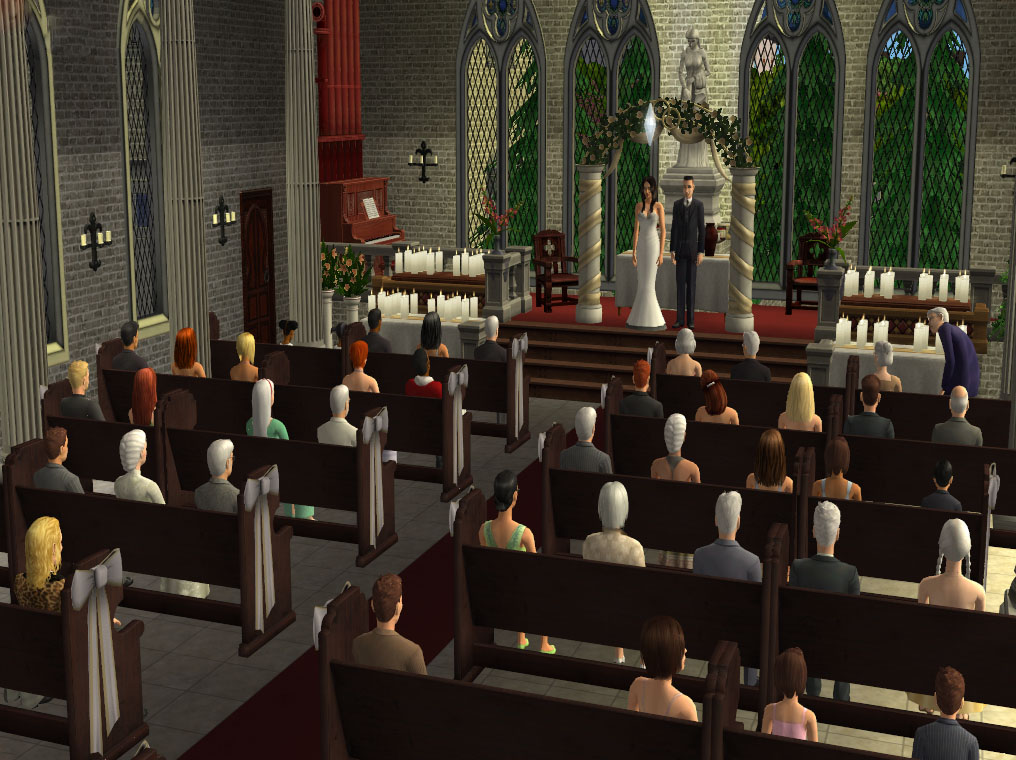 New! Fully Renovated Pleasantview!
Like my work? Help me make a difference!
PerpetualFlare

Then came the wedding..

Prepare to be underwhelmed! These aren't anywhere near as elaborate as you guys' wedding pics....

Julien Cooke and Nina Caliente. He fell for her pretty fast and was ready to get engaged after one or two dates! (Hey, it was spring.) Nina, being a romance sim, drug her feet on the commitment thing for some time. But they've finally tied the knot and are currently on vacation at Twikki Island. Even if he only has four nice points, I get a definite "good guy" vibe from him.

This is Melissa Fancey on her wedding day to fellow military sim Buzz Grunt. Before she tied the knot, she felt the need for a nice cold beer to calm her nerves.

(He sure seems to like romance-oriented ladies... first Lyla, now Melissa. Maybe undeneath that gruff exterior he wants a relationship with lots of outward affection.)
Lady Scarlet

Well, not exactly a wedding since the wedding itself never happened (the groom died that morning and the poor bride couldn't stand a life without him, so she also killed herself), but Abigail looks cute in her wedding gown ^^

1th part...
Jack and Zoe posing for the wedding album....

I am Brazilian but I live in Switzerland!!!!
Call me Paula if you want :)
My Tumblr =)