"What the <BLEEP> is going on?!? What's happening here? Oh...no...oh no..."
Bayside Flats was a good choice, although for entirely different reasons than I expected it to. I think I've figured out what happened, though I'm still looking for preponderance of evidence at least. I don't want to spoil it, so I'll just say that it is a very disturbing hood in a somehow satisfying way, especially once the ghosts come out. I highly recommend it!
"Fishing alone won't feed you. Need to cook!"

@AndrewGloria, I actually considered the Orphan Assistance Fund scholarship as a motive for some of the deaths before realizing that it wouldn't be accounted for in a basegame-only hood -- so yes, an Orphan's Outing of sorts.
I don't know about my old megahood. It's neatly packed up and labelled with its Downloads folder in the same place I keep backups, but I suspect that I won't go back to that hood itself, even though I'm almost certain I will have a megahood again if I live long enough. Dystopian elements aside, it is outdated -- I think my highest expansion was Seasons (although I also had Mansion and Garden, leading to a weird install with a bunch of side effects) when I started it, and only in time did it get transferred to the UC when that came out, get switched to ACR v.2 (which requires Apartment Life) then later pick up up some extensive mods that didn't even exist when I started playing it (e.g. traits, custom supernaturals). The Summerdream-Gossamers were just Sims who had basic magic from the non-AL Harry Potter Project when things started, and that made a major difference in events that led to some of the budding dystopian themes. Obviously now they should be faeries from the start, but faeries didn't exist then in TS2. I also learned by blundering, which combined with some mods to also start chains of events that led to dystopian themes. This was happening almost to the end, as the contagious-zombies mod at first had no effective counters to the outbreak other than killing the zombies and allowed for not-very-logical and very overpowered species combinations (zombie vampire ex-NPCs being the worst). If I ever dare allow zombies again, I'll know how to keep outbreak from becoming apocalypse, but it's probably too late for that in the old megahood.
I find it amusing that you think of that megahood as dystopian, as it was never intended to be. It probably sounds even worse when I put it this way, but it was an attempt to take the high drama of Sims (and especially of certain overly dramatic Veronaville families!) and make it semi-realistic to the world I lived in. I was commuting almost daily to an often-cold city with a lot of red brick buildings and a weirdly noir aesthetic, so Downtown SimCity got lot of red brick buildings and weather patterns that made it a rainy-noir city much of the time. The megahood was a less pleasant place to live in than the world I lived in, but I didn't live around Montys, Capps, Goths, or Grunts -- or Princes, or Stratfords. Now that red-brick city has gone from a noir aesthetic through the glory days of a hipster-foodie one, to an empty-shopfronts one that hit before the pandemic due to a rent bubble that didn't pop until properties became so unaffordable that businesses moved out to the strip malls -- and I don't know what it's like now, because I haven't been there in over a year, and the last time I went, it was only to one of the outlying strip malls. Maybe it looks like the Dumptown neighbourhood of SimCity did in the old megahood. The megahood, sitting in stasis, is now better than the world I live in, and yet it feels doomed -- not a good reflection of the fate of Real Life.
I think it feels doomed because, grimdark as it was, it was founded on an optimistic view of people. The sims I made to fill what I felt were gaps are not really Sims I could make now -- maybe cynical parodies of them, but not the idealistic-despite-the-mess characters they were. I can't help but think that all of them -- yes, including the demon -- would have died horrible, pointless deaths in our world in 2020. I sometimes wonder how many of the premades would have done any better.
Please support the Sim National Labs Folding@Home team!
Stuff I've made!
Pideli

Kinda glad they can't hear me

"oOOOoH"
As Ripp Grunt emerged victorious from a fight with Tank.
I am Error.
AndrewGloria 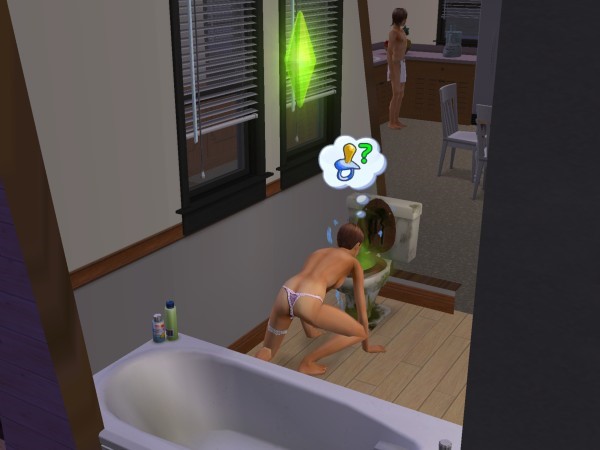 "I think you're probably pregnant too."

"Get a bubble bath and get some clothes on. Then get a bite to eat and go to bed. And make sure you put your pyjamas on -- don't try to sleep in those undies! And don't do any unnecessary work. I'll tell the boys and your husband to do it for you."

"Victor! Come and clean this toilet this minute. It's a disgrace your mum's having to use such a filthy toilet. Your mum's pregnant so you and Robert are going to have to do a lot more work in the house in the next few days."
. . . . . . . .


Yes, it does look like Fay Briggs is pregnant. This will be only the second pregnancy in Greater Veronaville since I started playing the 'hood in 2012. The last pregnancy resulted in the twins Peni Jo and Peregrine McBain, who have just started school. Two pregnancies in nearly eight and a half years playing the 'hood -- is this a record?

Fay Briggs is a Family Sim. She lives with her husband Val and two teenage sons in a large house on a 5x3 lot in Vine Street in Monopolis. If you took part in d_dgjdhh's Monopoly Game Town Contest a few years ago, you will have met Val Briggs. He's Milburn Pennybags's Head of Town Planning. As a town planner he's very well paid. He's currently earning §1,800 a day, with excellent prospects. Fay is a stay-at-home mother. The house has only three bedrooms, but they are large, and converting part of one into a nursery won't be hard. The Briggs family clearly have the spatial and financial resources to take on another child, so when Fay told me she wanted to have another baby, I had no reason to refuse her.
All Sims are beautiful -- even the ugly ones.
My Simblr ~~ My LJ
Sims' lives matter!
The Veronaville kids are alright.
Sims2Maven
Field Researcher
#3730

"You're not going out dressed like that!" - me to Sims who insist on going outside in their PJs/underwear. Plus a quick rush to the Sim Manipulator to get them properly dressed.
simsample

@AndrewGloria I am so excited! A new baby!

"Go away you creep! It's 1:30 am, everyone's asleep!"
Tank's townie girlfriend randomly rang the doorbell at the Grunt's house. Stalker much?
Kligma

"What are you-- yeah, you had roaches. Get over it. There's a girl in your bed."
(Dude on a date randomly gets up from the bed to sigh over cockroaches)
I am Error.
Peni Griffin

"Wait, seriously? You can't wait till after the party to abduct her?" (Tina Traveller was initiated into the Secret Society halfway through throwing a party at which she was working on the next notch on her bedpost. I swear I won't have a single unjoined playable at LFT in three more rounds if this keeps up.)
Ugly is in the heart of the beholder.
(My simblr isSim Media Res . Widespot,Widespot RFD: The Subhood, and Land Grant University are all available here. In case you care.)
natbsim75
Field Researcher
#3735

"Just stop it, you both think that you are so smart but you are a bunch of IDIOTS!!!"

Pascal and Vincund Curious drive me crazy with their neat-freakness: I told Pascal to get a bottle for his (toddler) daughter. The little girl was playing with her toys on the floor and he couldn't reach her to give her the bottle and he left it on the floor. Poor girl was not that fast to turn around and get it so after a second he took it back and went to dispose it! He was so hell-bent to clean the "offensive" bottle that I couldn't cancel the action and I had to reset him to make him leave the damn bottle alone so the little girl could finally drink her milk

Later that day, Vincund was teaching his son to walk. Somehow he managed to realize that Pascal's daughter left her toy on the floor and she went to her toddler bed to sleep. Vincund quit teaching his son and he went in Pascal's room to put the toy back in the toybox

) for making the bathroom look like... Venice everytime he takes a shower

Having four kids was your choice, now stop whining to me about it and change the baby's diaper! ~ They both feared changing a diaper. They also waited about two seconds after their twins were born to make baby number four, so they really have only themselves to blame here.
All's fair in love, war and video games! ~LyokoGirl5000
HarVee

"If I can't put that there then there is another 'place' I can put it."

I was redecorating and I needed to place an object but the game was glitching out saying something was occupying the tile already.
zu, zu, zu matán
BlueAlien
Scholar
#3738

"Sorry, mate, you've got a toddler. You can't just go to bed when you feel like it."
Neverwinter_Knight77
Lab Assistant
#3739

No! Stop using the back door!

*lock for all sims*
sugoisama

Quote:
There's a joke in there somewhere... I'm just not willing to point it out... so y'all are gonna have to figure it out on your own...
HarVee

Its been several months since I've played Sims 2, so I've forgotten a lot of things ACR can do. I think the risky woohoo feature kicked in, because I wasn't expecting for my currently playable Sim to get pregnant.

As soon as she she threw up with the baby question mark I said "Well, I wasn't expecting that. She's going to need a bigger house."
Peni Griffin

"Ooh, judgy much?" As my game crashes, as Kendall Lawson picks up the phone intending to ask her ex, now engaged to someone else, on a date.
Ugly is in the heart of the beholder.
(My simblr isSim Media Res . Widespot,Widespot RFD: The Subhood, and Land Grant University are all available here. In case you care.)
Sokisims

To the landlady: I ​​opened the door to let in some visitors, but that was five hours ago! Get out of my room! It's weird that you go in and see everyone sleeping. And stop grabbing my babies!
sugoisama

"The worst she can say is no"
Her:

Quote:
Back to top