Hi there! You are currently browsing as a guest. Why not create an account? Then you get less ads, can thank creators, post feedback, keep a list of your favourites, and more!
Quick Reply Print version
Search this Thread
Replies: 12224 (Who?), Viewed: 1549833 times.
Page 483 of 489
LiliLiliLili

Not today, but witch was practicing magic and plumbobbs have appeared. 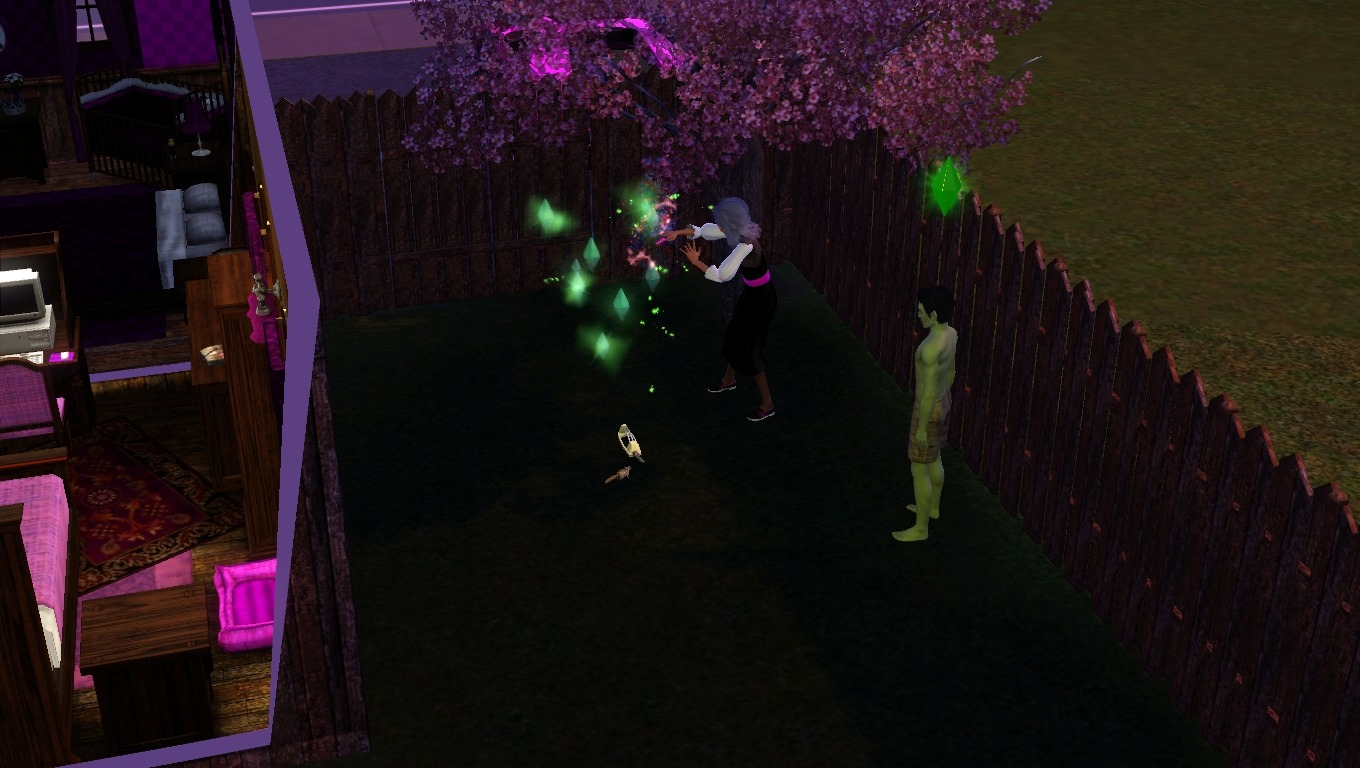 I'm new to TS3 and starting with the base game. This caught my eye during the loading screen. Game came out in 2009 and was tossing around the phrase "Social Distance" like it was 2020.

This proves my theory that TS3 developers are time travelers, hence why we get so many time traveling aspects in the game

I found out that Maxis has some pretty archaic ideas about marriage& children.
I had a minor celebrity Sim being "accused" of having a child out of wedlock, giving her a 3 day negative moodlet. Another single female Sim that had a baby immediately rolled a wish to get married.
Really Maxis? It's not 1950 anymore.
The Grumpy Old Gamer's Blog

This might not be "playing" by itself but I found out that the off-lot lighting are actually textures painted over the road and neighborhood terrain. 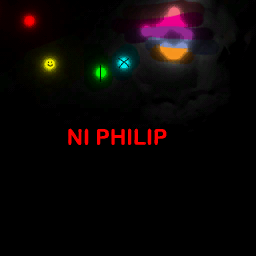 Edited the .dds texture for this terrain chunk in Sunset Valley. This is the area approaching Pinochle Point. 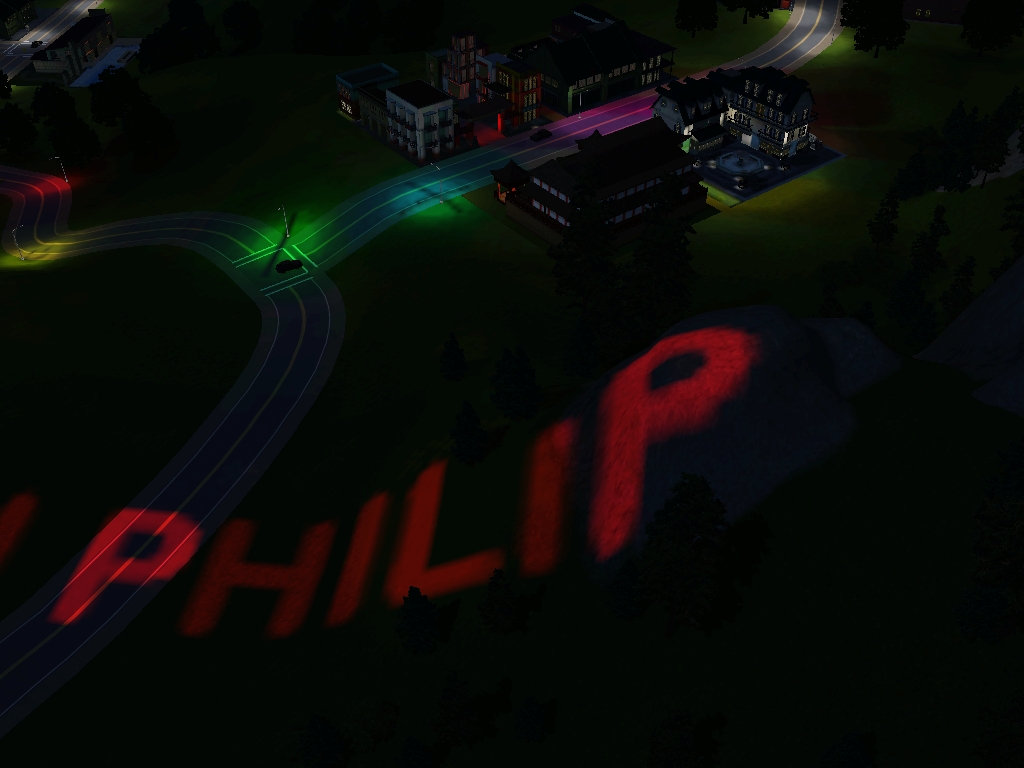 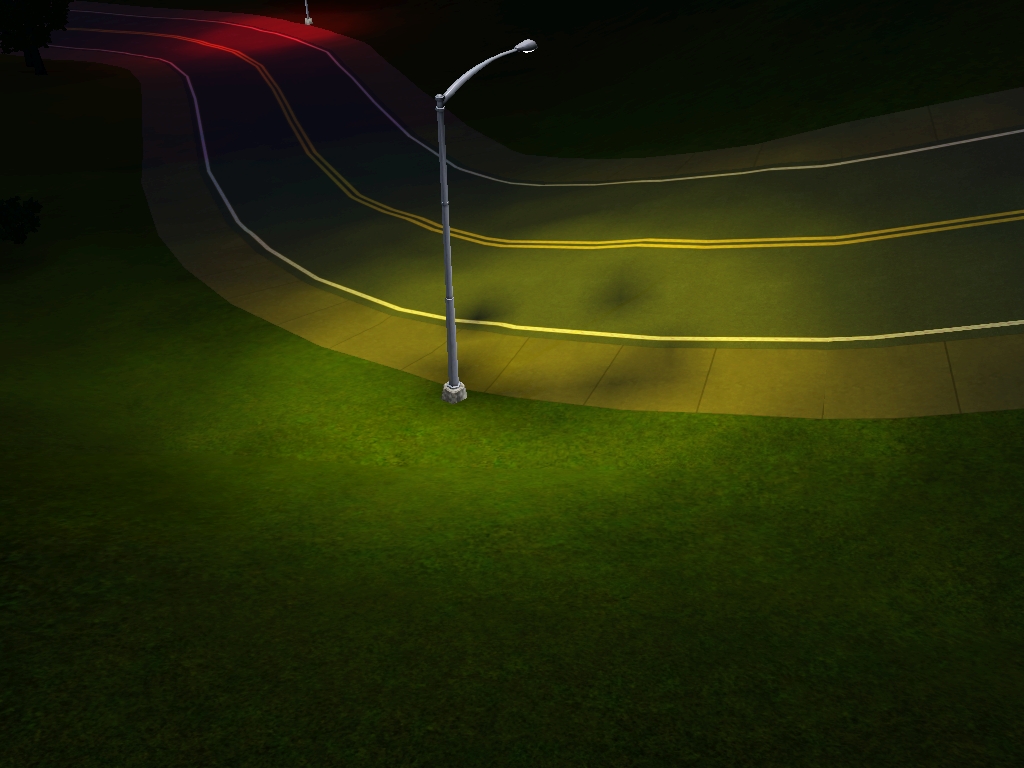 Isn't the time period of Sims3 earlier than Sims2? So it kinda is older....

This message has been deleted by Wojtek.
Axe Gaijin

She is in a relationship with the father, they're just not married. But a woman's worth as a mother should not not be measured if she's married or not.
The Grumpy Old Gamer's Blog

~Life is like a box of chocolates, just when you're enjoying it, you choke on it.
igazor

The game's sensibilities, if you can call them that, are set in the idyllic world of 1950-early 60s television shows. It wasn't really like that even back then. In fact, some of us who are old enough can either attest to that or say that we wouldn't have even been born if that's the way things really were (I fall into the latter category there myself, as it so happens).

EA didn't mean to be insulting, but the parts of time and resource management that relate to things we find absurd today like being shocked and gossipy over unmarried parents or certain public displays of affection are all wildly exaggerated and part of the charm of the game. Of course some players still don't like that, but fortunately there are mods that can help soften those elements or take them away.

Or you might say that there is some evidence that in her post-TS2 years, Mrs. Crumplebottom spent some time as a game developer.

This message has been deleted by Wojtek.
Axe Gaijin

Meh you guys are probably right.
If I came across a bit crass I apologize, it just pised me off.
Seen too many single moms IRL with poor self esteem becuase they've been looked down up on in the past. Guess it just triggered something in me.
The Grumpy Old Gamer's Blog

~Life is like a box of chocolates, just when you're enjoying it, you choke on it.
SimlishLiars

That's so creepy I don't know

Today I learned that you must make sure your sim is in a safe location, outside, before telling your sim to set off firework rockets, because the little idiots will light your house on fire. 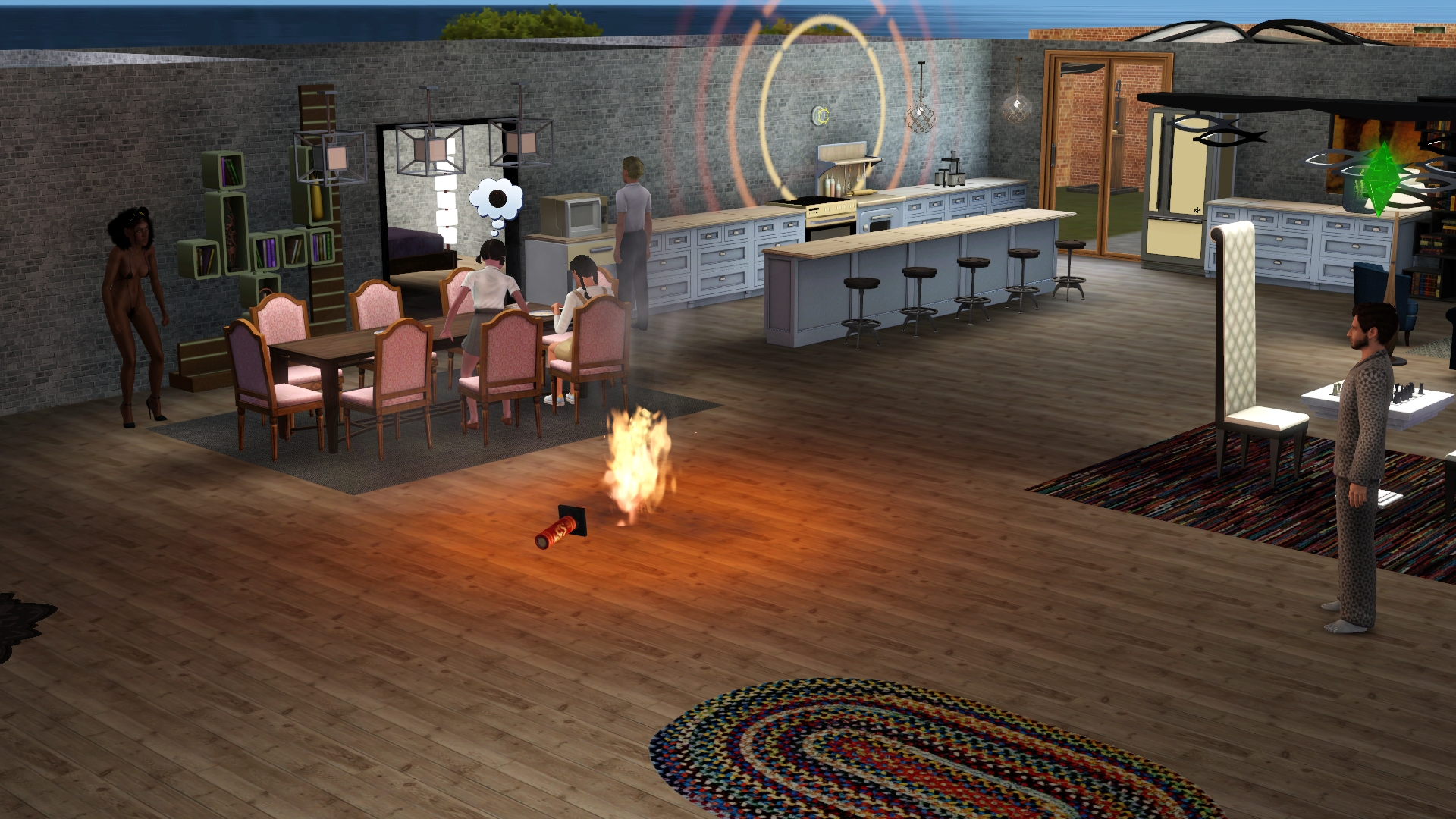 I am somehow not the least bit surprised.
flloetryresident

After binge watching "Hey Arnold" on Hulu, I discovered that I wish the sims had more social activities for kids like in that show; They had bike-a-thon races, mud slides, baseball fields. Don't get me wrong, I love the things kids can do on the sims, but I usually like to start my main character as a child and having them do fun things like they did on Hey Arnold would make the experience amazing!
flloetryresident

This!! Same thing happened to me and I thought it was the same thing too!
Naus Allien

Remember the base game was supposed to come with clothing stores? Well, today I found remnants of the code:

How interesting! I know EA left all sorts of remnants of things all over the code, but I would've thought the Clothing Store code would've been at the very least repurposed. It must've been a very late exclusion.
You have been chosen. They will come soon.
Naus Allien

It was a failry late exclusion since the clothing store can be seen in promotional material as late as Nov 2008, and the game was supposed to come out on February 20, 2009. 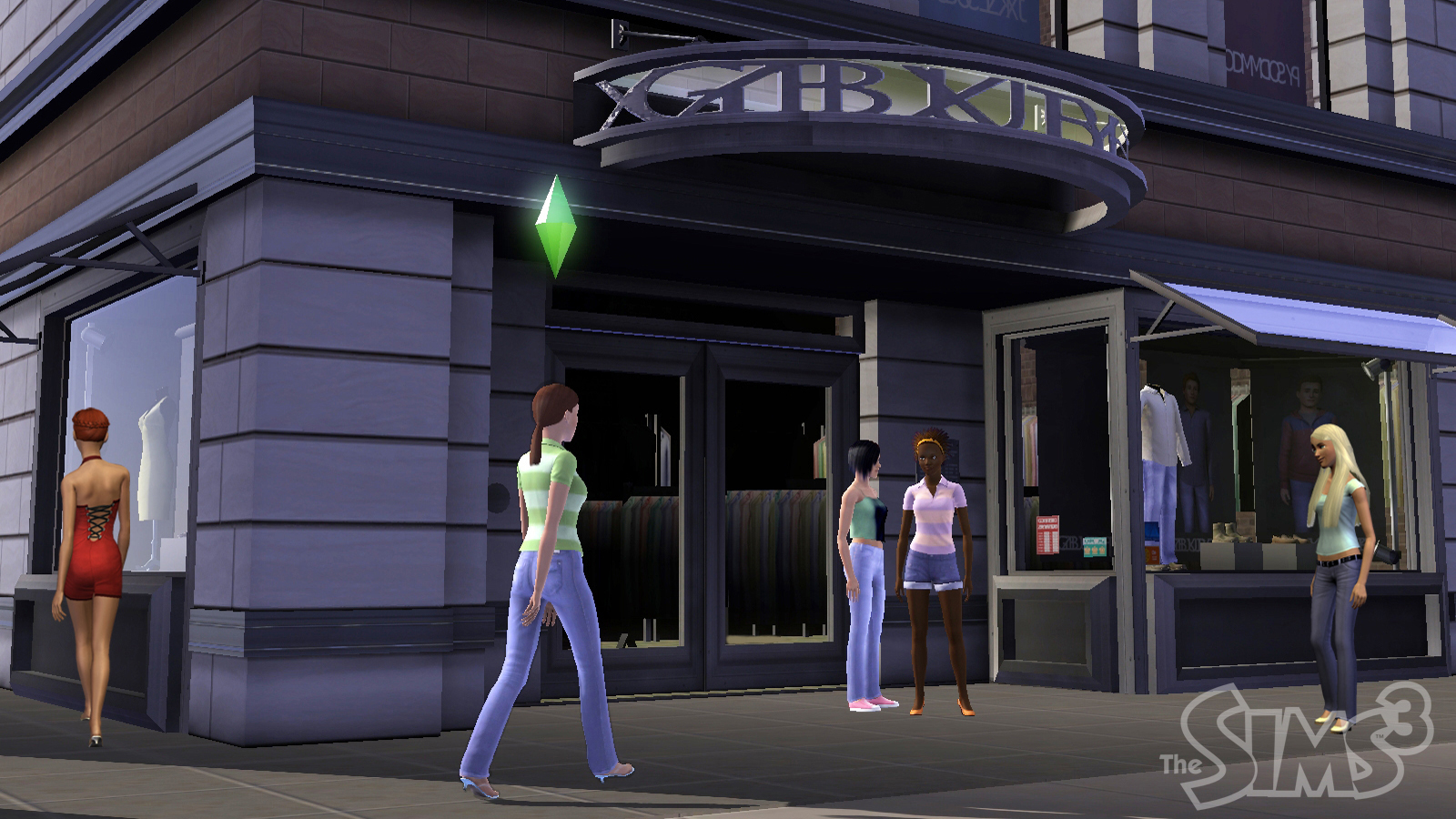 The mesh was modified and used for the spa, which according to the rabbit hole list was the last rabbit hole added before release: 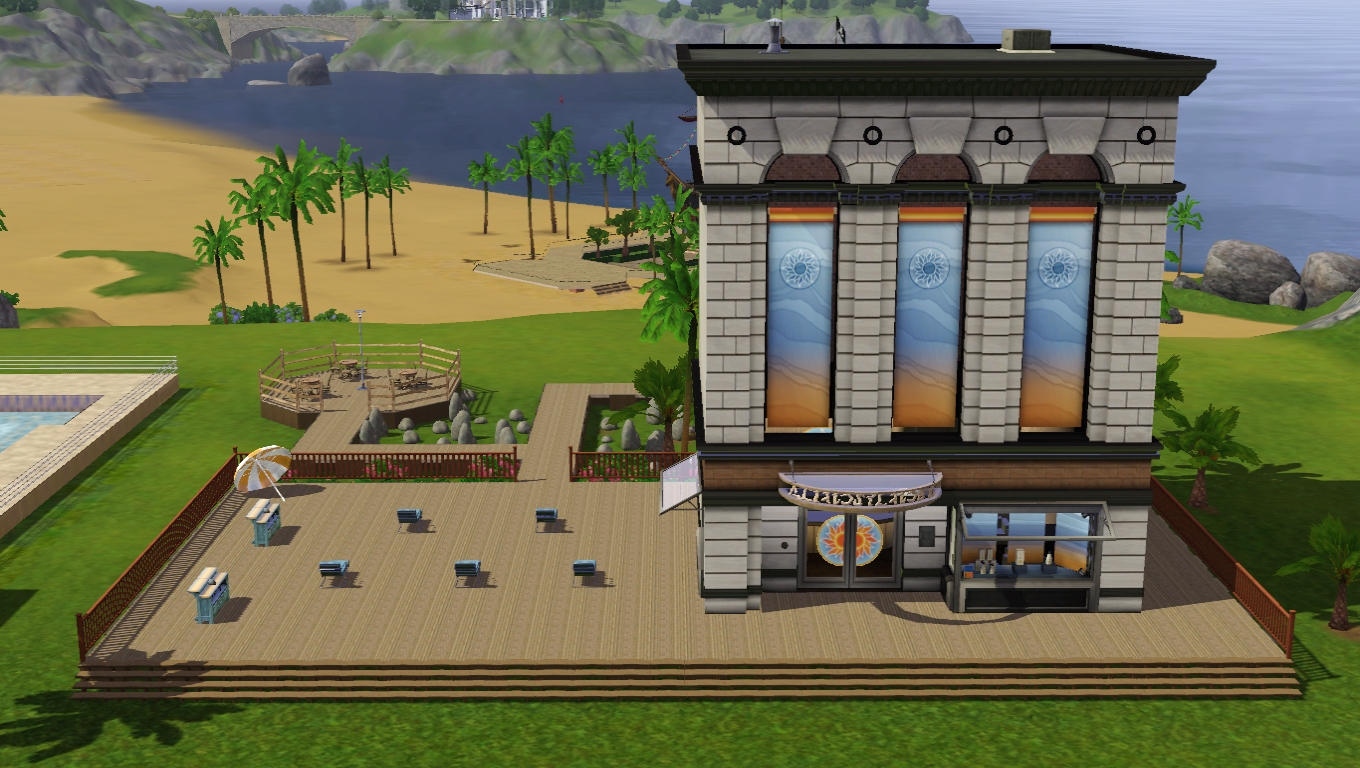 I found out that sims who are not vampires can "examine" the special vampire bed and they have some pretty amusing things to say. It seems like these are the only reactions though. 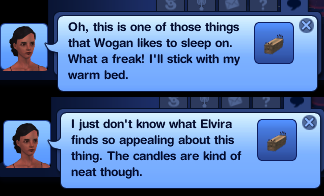 I was surprised to see that when my bird died he was actually at the bottom of the cage and not just magically disappeared like all the other small pets. I'm trying to do thing I usually don't bother with and playing with pets is on that list. 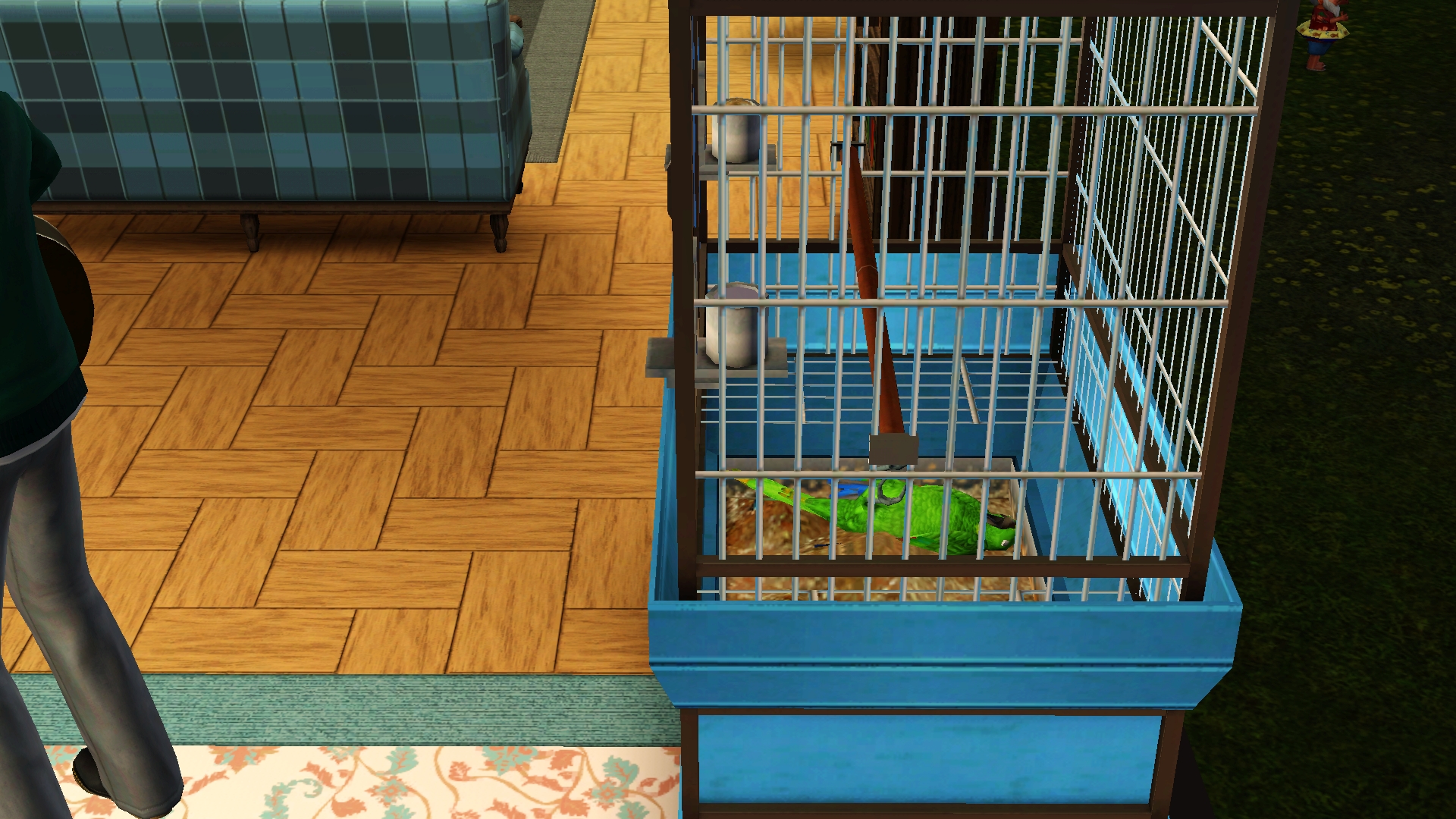 Not a real discovery but I'm watching Pleasantsims' TS3 recreation of Pleasantview series and it reminded me that the "Give birth in hospital" sequence is almost always weird in some way. You get mothers riding a bike, people who are suposed to drive the mother, driving right past her while the mother walks to the hospital, absent fathers all of a sudden showing up at the hospital. It's almost always a little odd and funny.
LittleCheshire

This morning I actually discovered that the "Like Swimming" trait does not actually affect pet autonomy during mod testing in one of my specific neighborhood saves! While playing I noticed that despite having said trait, while my test dog would always get the want to go swimming in the pool, he would never jump in the pool out of his own free will. I actually decided to look up the trait today in preparation for restarting my observations on the pet autonomy in The Sims 3, and sure enough, the "Likes Swimming" trait does not affect autonomy! It simply affects their wants, and judging by the code for this such trait, it also affects how they enter the pool.

Which is weird, honestly. All pet traits in The Sims 3 affect autonomy, but not this one for some reason? Even the "Hydrophobic" trait affects the actual behavior of the dog; they will never choose to swim, they will actively resist being forced to swim, and if worse comes to pass they will get a negative moodlet if somehow forced into the body of water. Again, the "Likes Swimming" trait only affects wants.

I genuinely wonder why this is. So far, it seems like a trait that has been accidentally left unfinished, but then again this is EA.
Oh c'mon. There better be a point to all this stress I'm under.
Jathom95
Forum Resident
#12072

That pic made me think about how much I wish there was a smaller cage size for birds in particular. The terrariums and all are pretty realistically sized, but they take up so much room so you kind of have to place them before anything else and design around it.
You have been chosen. They will come soon.
nitromon

It's a computer game. Do you people always have to turn everything political? Not everyone share your views.

No, I agree with this statement. But you do realize if a single mother wishes to get married, that doesn't necessarily means she is placing her worth in being married or not right?

That's the problem with this generation, everyone judging each other while putting themselves on a moral pedestal.

If a feminist doesn't want to get married, that's fine. But then why do they insist women who want to get married are weak and dependent on men? Why trample on other people's happiness? Why put down others because they believe in something different?

In case you didn't notice what you said in your first post. You mocked people who believe in different things than you as old and outdated. Putting yourself on a moral pedestal, you openly judged and dictated that marriage is a 1950 thing. If you can't see how sanctimonious your attitude is...

Nitromon is a type of Pokemon encountered in the Pokemon Nitrome Version series.

This message has been deleted by Wojtek.
310175
Scholar

Pets take subways! I'm testing a few new mods in Simmington, which is small and has a lot of subways that sims actually take in a semi-rational way. However, the dog takes them too. I can't find a setting in NRAAS traffic or Go Here that would prevent that.
Wojtek
Field Researcher
DELETED POST
17th Jul 2021 at 11:49 AM

This message has been deleted by Wojtek.
igazor

Pets can also take elevators on their own, which is awesome if they live in a highrise dwelling. Was never sure if it was explained how they could reach the buttons, so there must either be floor-level versions for them to push or the elevators are voice (woof and meow) activated.

As for subways, given the way I see humans behave on them whenever I leave my immediate neighborhood IRL, I would have to say that animals would be a welcome addition. They couldn't possibly behave any worse.

igazor
NRaas Industries
Back to top