There are also 1 guests viewing too.

What happens if I put elder gray colors in the custom bin? Will my sims be able to age up with the same hair mesh they have or will I have to edit them to use the elder hair via mirror? Reason why I'm asking is that I'm considering using multiple hair colors but just 1 gray color for all of them.
what_makes_you_haha.mp3
SFS uploads
old uploads
new uploads
simmer22

^ The gray needs to have the same "Family" number as the hair colors you want to turn into that particular gray. Don't put more than one of each of the binned colors in the same family, as there's a small chance they'll end up "fighting" each other, especially if an age is missing or you age down sims from elder ingame/in CAS/Bodyshop - I've had a few sims that grew up with the wrong hair color because of this (the game chose the wrong blond/brown/etc. because some hairs were familied together).

You can have a separate gray in the custom bin that works for either all ages or just elder. Cat's hair binner allows for this. Nice if you want an option with colored hair for elders (you'll have to apply the gray hairs in a mirror, custom bin) or want separate files for elders but familied to the binned hairs (will self-apply but if you want a different grey color you'll have to use a mirror).
My site - TS2 baby stuff - ToU

, I haven't touched the hair binner in almost 2 years so I forgot how to use it properly. So I can bin the regular black/brown/blond/red hair colors as normal, but leave the single gray hair color as custom, correct? The thought of elders having the choice of either red hair or gray hair upon aging up doesn't sound too bad now that I think about it. I could create more gray colors, however.
what_makes_you_haha.mp3
SFS uploads
old uploads
new uploads
simmer22

@Primavera, that's how it is, yes.

Just a reminder, though - if you want elders to have colored hair (they'll be "binned" as their respective colors, so aging down will get you the proper color, but all of them show up in the grey bin), you also need to make sure the elder hair is colored in the files. If the elder age is colored gray it will be gray.

You can use custom grays or you can family-bin them with different hair families (I tend to use 4 different grays with 4 hair families to get some variation).
My site - TS2 baby stuff - ToU

That makes sense, thank you again

. I'm very indecisive when it comes to hair colors so I'll do the 2nd option; have 4 grays for each family so I have options, that way it'll be easier to keep track of.
what_makes_you_haha.mp3
SFS uploads
old uploads
new uploads
sushigal007

Silly question, but is there a way to kick townies out of apartments? Other than move a playable household into that apartment? I've got a whole bunch of owned businesses that I generated staff for, all named Business Employee to make them easier to identify so I could stop my playable Sims from forming relationships with them. Anyway, one moved into the same apartment building as Vivian Cho and Timothy Riley and invited herself in for the Saturday pizza gathering. It's not a big problem, at the end of their round they moved into a nice, big house in Riverblossom Hills and I'll use Monique's gnome to remove the relationship, but I'd like to know if I can stop it from happening again in future.
Tumblr / Livejournal / Pillowfort
Bubblebeam

Do other peoples ceiling lights fade away, or am I reading this wrong? Mine have never done that. 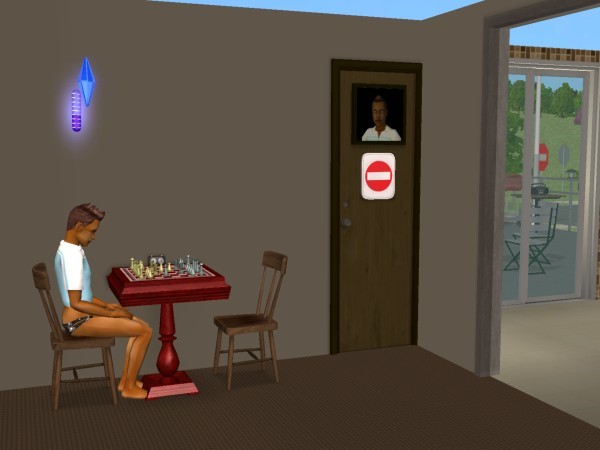 Dormie Fox Frost has got the No Entry sign on his door, but he's sitting outside his room practising chess. I think the No Entry Sign is meant to mean that he's in the room and doesn't want to be disturbed. The No Entry sign has been there for hours as Fox has been doing various things around the dorm. Should I Force Error on his Myne Door?

Second stupid question about dormies: is there any way to tell if a dormie is a member of the secret society, if he/she is not wearing the special secret society blazer?
All Sims are beautiful -- even the ugly ones.
My Simblr ~~ My LJ
Sims' lives matter!
The Veronaville kids are alright.
CrystalFlame360

Quote:
The no entry sign just means the door is locked. As for the Secret Society I'm unsure since your university is not one of the Maxis ones. You just have to interact with and befriend different types of dormies and wind up with a surprise, unless someone knows of a sure way to figure it out.
When a game is predictable, it's boring.
That goes for any medium that isn't life.
That's why The Sims 2 is my favourite sims game.
It has elements of unpredictability and everything feels more involved.
The Sims 4 is another story altogether...
Peni Griffin

This is LGU, right? If you go to the download thread, to the comment where I introduce the dormies, I put their pictures under spoiler tags because when I teleported them in for photography the SS members were wearing the jackets, so you could sneak a look in there.

Playable SS members (including dormies who are moved in) will have an extra option for the "Play" interaction with other sims and the "College" interaction on the computer.Presumably this applies if you make them selectable, also.
Ugly is in the heart of the beholder.
(My simblr isSim Media Res . Widespot,Widespot RFD: The Subhood, and Land Grant University are all available here. In case you care.)
AndrewGloria

Thanks CrystalFlame and Peni! I guess I can make Fox Frost controllable and tell him to unlock his door. I think he couldn't get into his room because he'd locked it. Maybe he's lost the key. Such things could never happen in real life?!

It seems I had correctly remembered who the Secret Society members were from when I was last playing LGU. When I first started to play LGU they were easy to recognise, because they were all wearing their blazers, but over the course of time most of them changed into ordinary clothes. The only one of the original members living in Dorm 2 is Barry Duran (originally Gene Poole), but he's a cantankerous old pain, who is really best avoided. You wonder what some people go to university for. Isn't it meant to broaden the mind? But there is a bit of a surprise -- Fox Frost appears to be a Secret Society member too. Both Alan and River were making an effort to befriend him, because he seemed so friendly and accepting. He really is turning out to be a bit of a dark horse. He generated some time ago, not when i was playing LGU, but when I was playing the main 'hood. I do have a YAs in Main 'Hood mod, so I suppose that's all right. He first showed, dressed as you can see him in a top and a pair of speedos. He was in Baldrair General Store -- looking at floral print dresses! Making me think that he must be the first trans Sim in my game. At first I thought he was a townie, but, on checking in SimPE, he turned out to be a dormie. But now it seems he's in the Secret Society too. I don't think I've ever seen him in a Secret Society blazer. I'd better keep an eye on him!

BTW When do they wear those blazers?
All Sims are beautiful -- even the ugly ones.
My Simblr ~~ My LJ
Sims' lives matter!
The Veronaville kids are alright.
Sunrader

Yes, if you don't turn it off. There are a few different settings that affect fading, but the one that stops the ceiling lights fading is in the LiveCamera.txt. They don't need to be changed one by one with this.

Normally, they wear them on University community lots. It's possible that your YA in the Main Hood mod messes with this code; and I believe most versions of the Visitor Controller do, too. (The VC also prevents anyone not in a Greek from dressing up for toga parties, removing its sole distinguishing characteristic, so if you've got it, be aware of this issue.)
Ugly is in the heart of the beholder.
(My simblr isSim Media Res . Widespot,Widespot RFD: The Subhood, and Land Grant University are all available here. In case you care.)
BlueAlien
Scholar
#28239

I love his name! The locked door/no entry sign doesn't keep out the owner of the room; it just prevents other Sims from wandering in and treating the room as public property. Uni Sims are obsessed with playing chess, so he was probably just doing that.

And I did indeed lose the key to my dorm room IRL, just as I was going on my first date with the man who became my husband. We hunted high and low for it for over an hour, and then I eventually found it in the lining of my trousers - there was a hole in the pocket and it had slipped through.

Random question:
Does anyone else start building a house just for fun and then, while furnishing it, ends up making a whole backstory for a sim that could move into it, only to never even create that sim?

My imagination goes wild with this game, while in school I always hated creative writing.
Back to top