Eric Dawhalia as a teen! Little brother to Emily Dawhlia who I put into the female sims thread.

Eric hasn't entirely found himself yet.. Not sure what he wants to do with his life. He did have a go at gardening once.. That didn't turn out too well because he didn't pay enough attention to it, hopefully it'll work out for the next harvest.

He's so damn cute haha! This is him after the family vacation.

And the other pic is of him cooking hamburgers

His mum in the background had just made Chilli Corn Carne and was going to serve it when he wanted to have a go at cooking himself.
He's always smiling haha.
"When darkness falls hope is a concept broken with suffering."
MsScribble Meet Surt Beaker, who is currently in the middle of reading everyone in town's email on his mother-in-law's computer. He's been sticking his (in his opinion, magnificent Beaker)nose into everyone's business since childhood; anyone who's ever chatted with him online has found their computer breaking down soon afterwards.

He's just as social as his twin brother, but he's social in the same way that their mother is: when he's on a community lot, he also talks to everyone... but only until he's found out something about them, then he walks off to greet his next target. If Circe's around -- and of course she's been doing the same sort of information-gathering -- they'll regroup and gossip for hours. No wonder his Aunt Erin was so stressed out while he was living with her that she had to be cheered up by everyone she visited.


As a result, he doesn't have many friends that aren't related to him either by blood or by marriage. Apparently he's rather difficult to take; people feel watched, they think he's creepy, or maybe they just don't like how he steals their newspapers and rifles through their email. He doesn't care. That's their problem.

His closest friend -- other than his wife Verity -- is Test, whom he's known since childhood. Their friendship is something that his mother Circe likes to pretend doesn't exist, just like how she chooses to ignore the other ways that "the Subject"'s family has made its way back into her own. That's her problem, though.
Lady Voldemort

This Dash. An ironic name for zombie since they are so slow...

I don't know what happened to his other eye. I think his little friend Peyton took it and buried it in the backyard somewhere.

About Dash.
* IQ= 130
* vegitarian
* very shy
* does not speak because he does not have a tongue
* best friends with a vampire
"AHVWADA KUHDAVUH!!!!" -Voldemort
Peni Griffin

John Thomas Orphan didn't wait for the sun to go down before he started haunting the new tenants in the building where he died a horrible, mysterious, and lonely death. Only the cat noticed him, though.

Lucas Iana stops by the residence of his friend Sharla to greet her brother Tommy, express condolences over the death of his girlfriend, and size him up as a potential Urele-Oresha-Sham. Tommy, a Knowledge sim fixated on the idea of learning enough about life, death, and the universe to bring Spring back from the dead, isn't interested. (I know Ottomases are attractiveness-challenged, but WTF? Tommy wasn't a bad looking teen but this new YA face will take some getting used to. If his arc goes as expected, he'll withdraw more and more, and I'll gradually shag him out till you can't see him under the hair. If he meets somebody who can snap him out of the obsession, though, I don't know how I'll signal that he's taking an interest in making him presentable again - he looks too much like somebody who never sleeps or shaves!)

Lucas is from the wrong side of the tracks and a simmigrant to boot, so his girlfriend's father - a man born into so much wealth that he considers going to parties and collecting insider information to be a job - would like an eye kept on him. Orlando Centowski is also old money, but he rejects with scorn the notion of spying on a brother!

All systems have a point at which they can't take the strain. Cooper Hawkins has been running to cover every family crisis by himself for years, as well as teaching a class that's way too big for him. When his Aunt Hilary dies, it hits him hard. He was never that close with her, but - his Pa is older than Hilary was! And there's not even a cat to hug, because the cat's dead, too! He's never had much faith in the gobbledygook spouted by the counselors at school, but Ginger calls a grief therapist and makes him go. "I'm allowed to feel awful when a relative dies, you know," he says defensively.
"You're allowed to feel awful without having that bad a trigger, too," the therapist points out. "You don't have to let every negative emotion build up inside until something gives you an excuse to let it all come out."
"Look, I've got responsibilities!"
"Yes, and one of them is letting your wife and children help you. They're not made of glass, you know. Has if ever occurred to you that Ginger might be less nervous if she had to be strong for you once in awhile, just for a change?"

Ugly is in the heart of the beholder.
(My simblr isSim Media Res . Widespot,Widespot RFD: The Subhood, and Land Grant University are all available here. In case you care.)
DeLoure So, this was my current Sim of the moment: Tyrone Gibbs.

He married Dina Caliente (with her married name being Dina Caliente-Gibbs) and they had four children - Dakota Michael, Skylar Grace, Parker McKenna and Kendall Allen. (Parker McKenna, the 3rd child, is Tyrone's daughter with Pollination Technician.) That's Tyrone's oldest son and daughter, Dakota (on the right) and Skylar (on the left).

Unfortunately, the save file got jacked up and the Gibbs family is no more.

I am so sad because they were my first attempt at a legacy and I was proud of the way Dina and Tyrone's kids turned out.

But alas, Tyrone and his handsome son are no more.

This is Jason, he is 5 year veteran of the Zombie Apocalypse. He is extremely tough and very serious. He comes off as rough but deep down he's sweet. And he is hott

My male dragon sim Savatore I made him a vampire and gave it the deadly neck bite mod so Sims who ever saw him were not able to tell it..

It was during the llama flu epidemic that it first occurred to Clovis Point that living alone has its downside.

So getting married when both he and his favorite girlfriend got pregnant wasn't all that traumatic; but now they've got two toddlers in the house so of course the sink is exploding. "What is it about the mere presence of toddlers that causes plumbing to explode? I've never visited anybody with a toddler that I didn't wind up fixing the sink! Where are my visitors? My friends owe me sink fixing!"

Well, they do get visitors, but somehow the sink never explodes when Ernest is around. Clovis was BFF with Ernest in college; then came that incident with Clovis dating Ernest's mom (which he's not going to apologize for because Ernest's mom is amazing and he should be proud of her) and they had a falling out. But Ernest was the first guy in the neighborhood to have an alien baby, so Clovis's pregnancy allowed them to patch up, and having the Munnys over relieves a lot of the pressure of the toddler years.

"Thanks, man. I know you disapprove of me -"
"Not you, just some of your choices. You're a great guy when you're not being stupid."
"Yeah, so are you when you don't have a stick up your butt."

Meanwhile, not far away, Ty Bubbler has decided to start a sideline of candymaking to his regular job as a restauranteur, and set up a chocolate machine in his backyard. It could be profitable if he can stop gobbling up the merchandise. (This animation is funny as heck.)

Ugly is in the heart of the beholder.
(My simblr isSim Media Res . Widespot,Widespot RFD: The Subhood, and Land Grant University are all available here. In case you care.)
Liv

As "Owner of a Lonely Heart" (Karina, his wife and only girl he's loved, died 7 years earlier =( )
Flarz
Field Researcher
#136 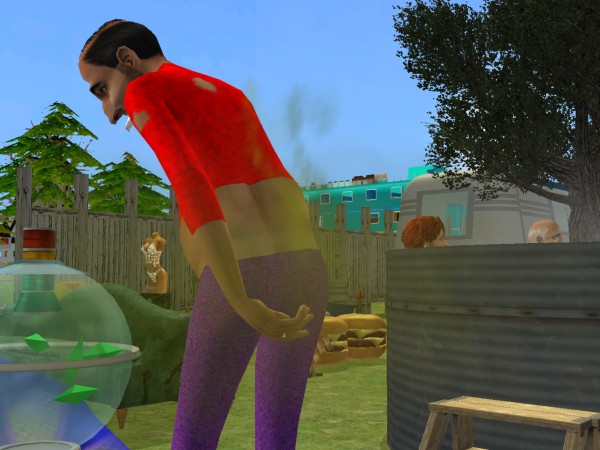 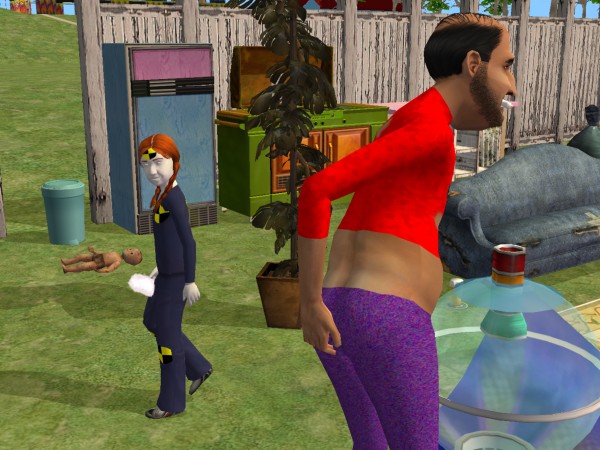 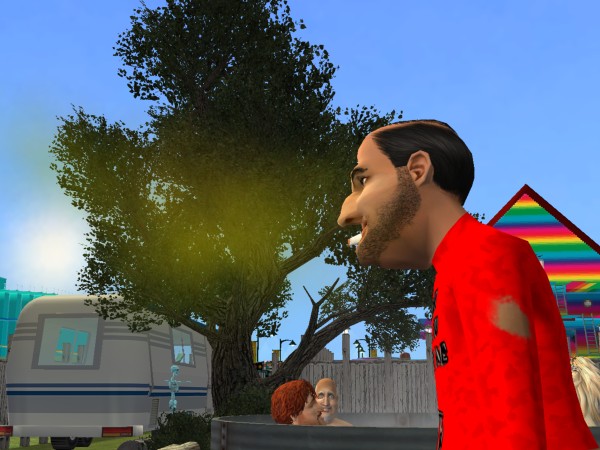 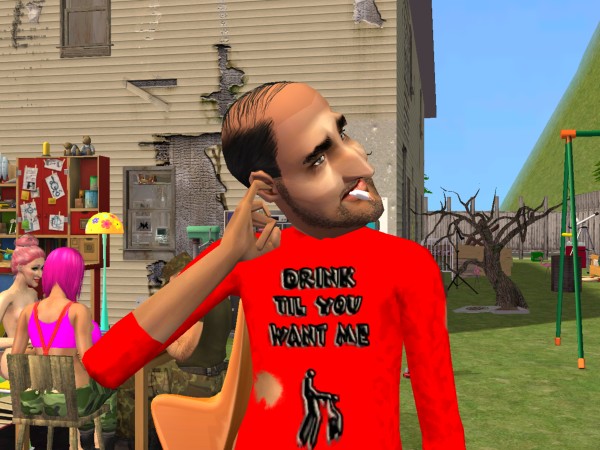 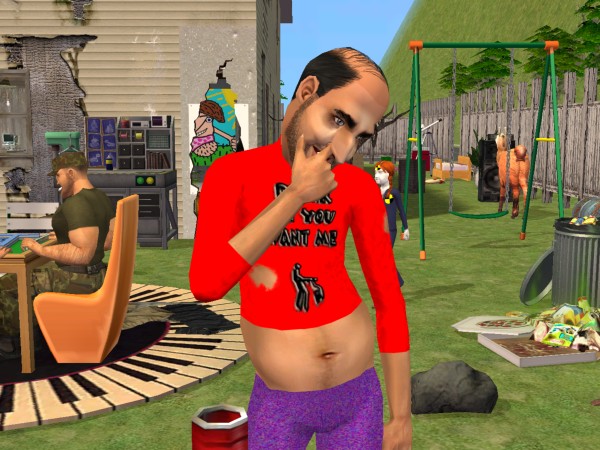 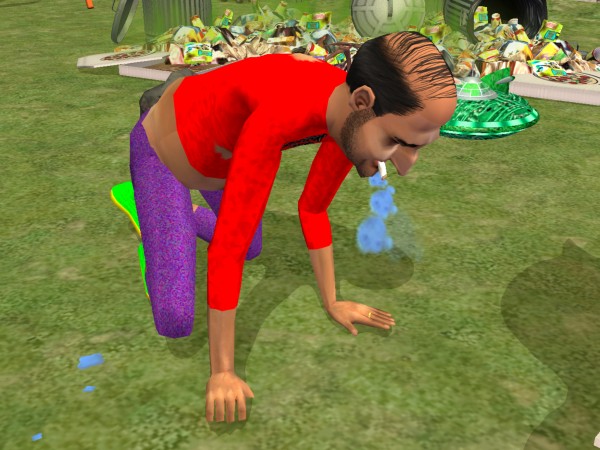 Some D00dz.
This message has been deleted by qliphoth_ballet.
Flarz
Field Researcher
#138

LeilaAisha You are damn right baby.

Flarz, that family is thoroughly and utterly disgusting! I love it!

This is an my version of an updated Don Lothario

And this is Nino

Life isn't about the breaths we take, it's about the moments that take our breaths away...
vicarious70

Your version of Don Lothario is very handsome. And Nino is definately a hottie himself. Is he Don's son by the way?
Flarz
Field Researcher
#141

You´re able to download the hole family, including sleaze mansion if you want? Just click on my signature.
Oh by the way, here is one of teddy´s suggestions about good behaviour: Every day is...and if you try to change the...the....eahm then you...damn i forgot.

Vicarious: Actually, Nino was the son of a one of the lesbian couples I had in my game. (he looked a lot like his mom). His mom had him from a one night stand and her partner had two kids from a failed marraige. I extracted him via sim surgery.

Flarz: Thanks. I have a neighborhood especially for them.

vhanster: I think your sim is very dreamy.
Life isn't about the breaths we take, it's about the moments that take our breaths away...
tomasina I think this depicts very well what men do when they are locked in a bathroom together. They're having too much fun to even consider getting gay.

Joshua Ruben loves his kids. Really, he does.

Men! Estebanico Casa, on the left; frat brother and housemate since graduation, Jim Spitzig, on the right. Estebanico's pregnant wife in the next room. The night Jim moved in they had a fight over a mutual girlfriend, the day Estebanico got married Jim fielded the call from Estebanico's previous night's date that came in the middle of reception, and in a moment Jim's speech bubble will contain the cheating symbol with no big red X through it. Jim's being encouraged to stay on, since Mrs. Casa's having twins and they'll need the extra pair of adult hands, but all things considered, I think Estebanico ought to think twice about leaving them alone together in the house if he doesn't want to wind up supporting any redheaded babies.

Merlin Hawkins demonstrates the "Anyone Fight Burglars" mod I downloaded and gets his TV and telescope back. In a moment, as the cop tries and fails to actually bring the perp in, Merlin and his wife will stand around gushing hearts and making sizzling sounds at each other instead of paying attention.

After careful consideration, I have concluded that it's not just player favoritism. Ernest Munny really is a very handsome sim!
Ugly is in the heart of the beholder.
(My simblr isSim Media Res . Widespot,Widespot RFD: The Subhood, and Land Grant University are all available here. In case you care.)
authorVampiress
Test Subject
#148

Carl Ying enjoying himself in the bathtub (I'm not so sure he appreciated my photographing him in there, though, as two sim seconds after this photo he gave me a "Do you MIND?!" look!