The Specter Family Story
In Christianity, the God is one, consisted of Father, Son and the Holy Spirit. The God exists since the beginning of the time.

Nature always looks for a contrast. So that's why there exists the Hell, and with it the Devil, consisted of Satan, Death (Grim Reaper) and ''Son'' – a Sim called Nervous Subject. 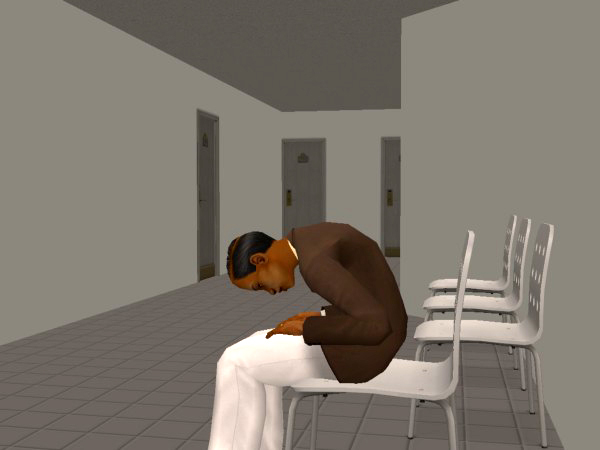 His wife Lerato Muenda was lying on the bed. She had a smile on her face. “Come, look at her, Peponi!” she said. Peponi stopped. 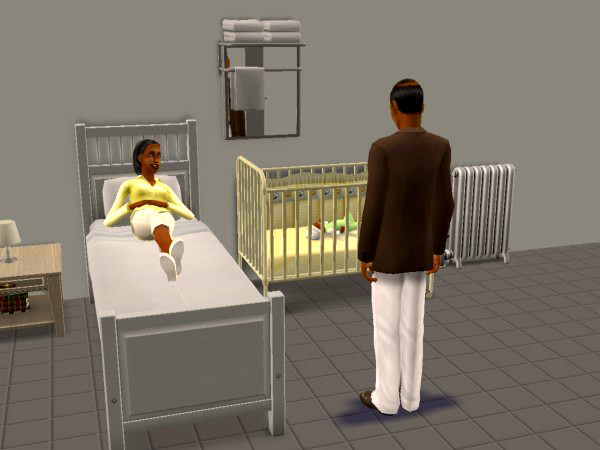 “It's a girl?” he asked. “Yes. I know you didn't want the baby to be a girl, but aren't you happy that after many years of trying we finally have our little angel Olive?” 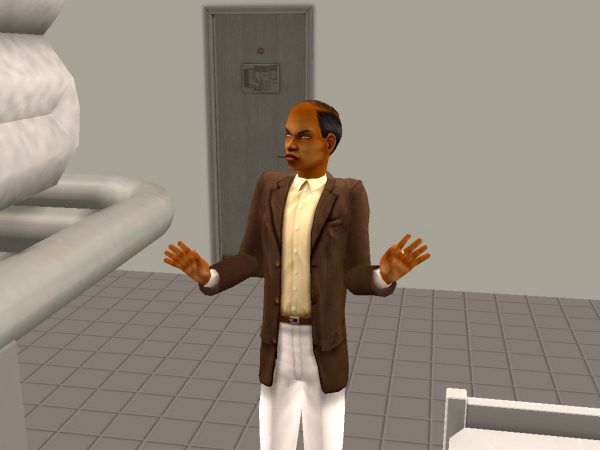 “It's okay I guess. But even though after so many prays, it's a girl. Whatever,” he said and walked out of the room. Lerato cried. 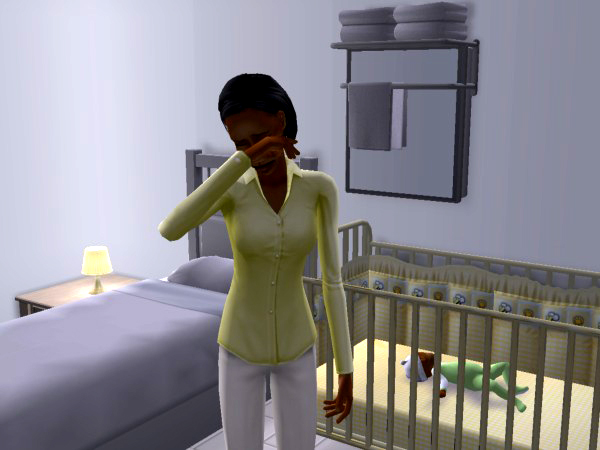 
It's been two years. Lerato got pregnant again. She had a baby girl named Willow. Instead of being angry because he didn't get a boy again, Peponi was happy. “The first baby should've been a boy. For the second one, it's okay to be a girl,” was his theory. Olive hated Willow, because she was her parents' beloved child, and not her. 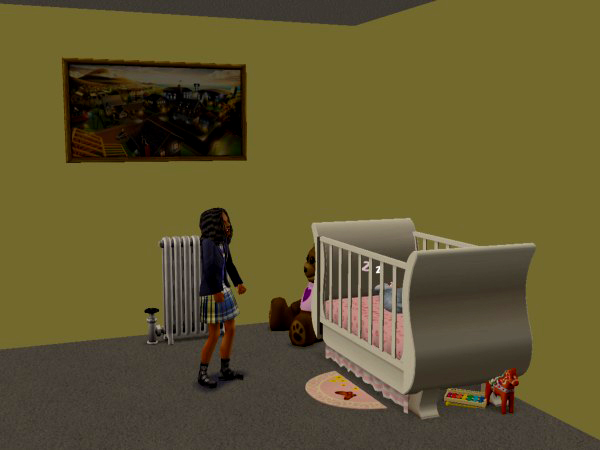 Olive was a strange child. She wasn't interested in stuff that 'normal' kids are. She was very smart. She spent most of her time reading books that are in the 'restricted' area of the library – those containing paranormal subjects. Resurrection, exorcisms, strange rituals and the ‘forgotten’ languages were the only things that were appealing to her. Every child she knew made fun of her. She was special. She even considered haunted people fascinating, even funny. 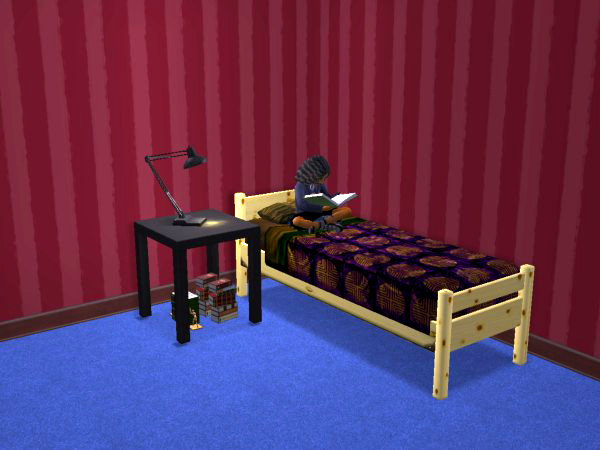 One day Olive had a dream. In the dream, a deep strange voice has spoken to her in a language she didn’t understand. But then, against her will, she took a knife and started slaying every person she’s ever met in her life. She was very scared. When she woke up, she walked to her mom. “Mom, mommy, I’m scared,” she cried. “It’s okay honey. What’s the matter?” her mom said. 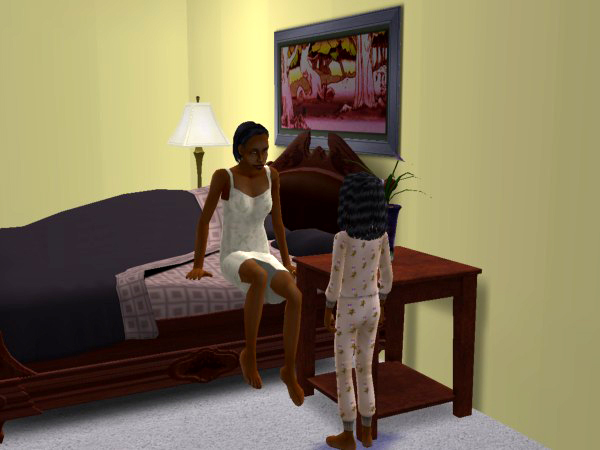 “I had a dream where I killed you, dad, Willy and everyone I’ve ever met. I’ve had similar dreams; this is not the first time!” she shouted. Lerato was scared. She woke up her husband and immediately drove her daughter and her husband off to the minister. 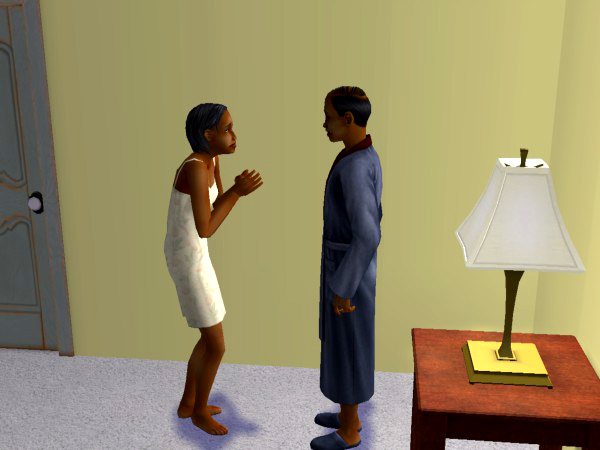 However, Olive’s dreams didn’t stop. The anger was growing inside of her. She failed classes at school. She spent days sitting on her bed, locked out. The power of the Devil was growing inside her. In a fight she had with her parents, she shouted everything she was keeping deep inside her for a long time. Her parents were in shock. They had to disown her. 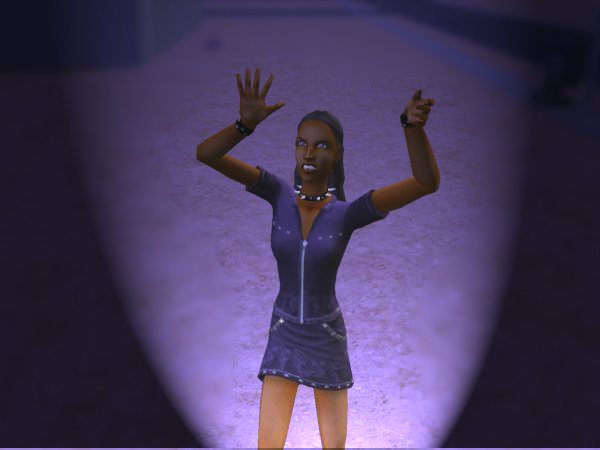 Olive Muenda Returns
In the meantime, the Muenda family moved out from the 13 Dead End Lane. They wanted to forget what happened that night when they lost their first daughter. They now live in a far away land Veronaville by the name Proteus and Julia Pantalone.


It’s been fifteen years. One awfully hot day, Olive Muenda came on the Earth out of nowhere. 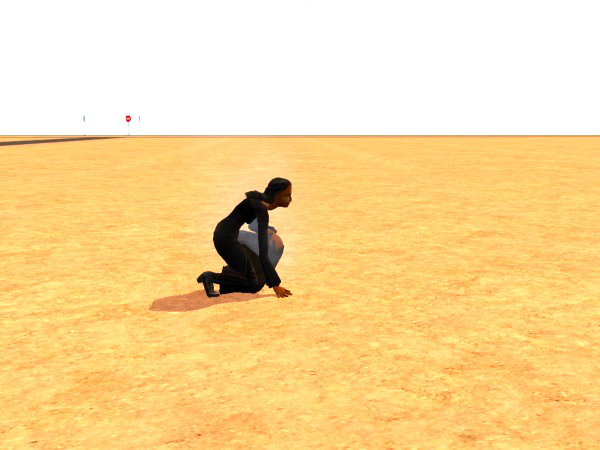 She moved into her old parents’ house. She got it demolished, and started building another one. 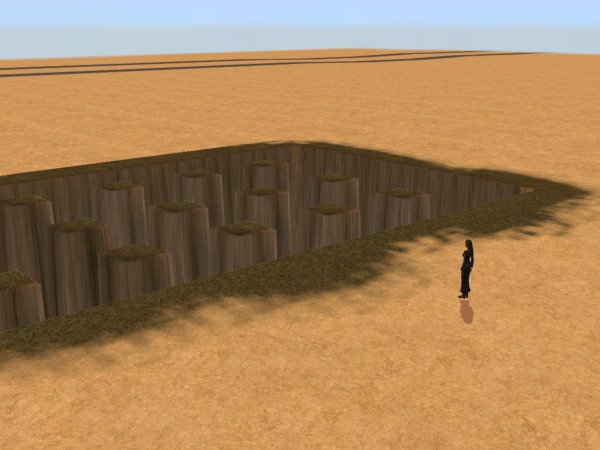 It was a hot day. The workers were digging a chasm for the foundation. They decided to leave work earlier because they were all feeling bad and had a stomachache and a headache. That night, Olive decided to get deep into the chasm. She was feeling very strange. And suddenly, out of nowhere, she started digging. After half an hour, she found a notebook covered with black torn leather. It was written on an ancient language. The blood that was dripping from her torn fingers fell on the book. The connection has been established. 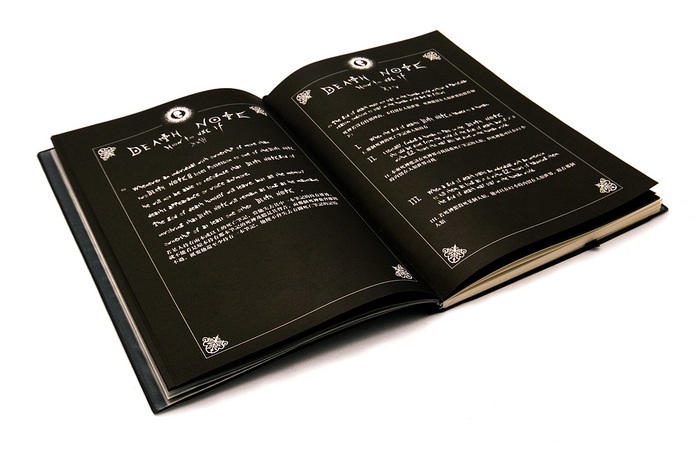 Olive had kept (or stolen) a lot of those paranormal books she used to read when she was a child. Now they’ve come to a good use. After two years of constant work, Olive has finally finished translating the notebook, called the ‘Death Note’. The notebook was sent on the Earth by the Devil himself, and was used to kill people, and when they were killed, their eyebrows would fall off in order to seperate the Death Note victims and the Age/Accident victims. After thinking of what should she use the notebook for, she remembered. The promise she made when she was 10. She immediately started writing her parents’ names down. She wrote her sister’s name down too, along with all people she’s ever known in her life. On that day, the sky got covered with dark, opaque clouds.


After the slaughter has been done, Olive heard a doorbell. It was from the Death himself.
Just about when she was to open the door, they got wide open, and cold air went into the house. Using the invisible force, the Death pushed Olive against a wall. The deep, semi understandable voice has spoken the curse, “You, Olive Muenda, the daughter of deceased Peponi and Lerato Muenda; also known as Proteus and Julia Pantalone, have used the Death Note provided by the mighty Satan over 23 times. I, Death, curse you to be the Mother of the Dead.” Olive fell on the ground. Strangely, she had no eyebrows anymore. 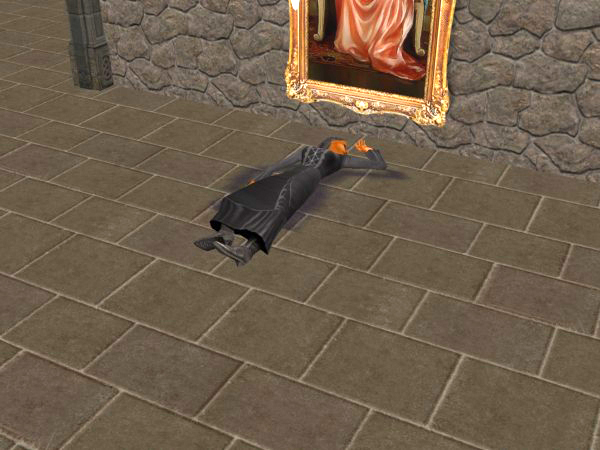 She doesn’t know why, but she didn’t get scared by the Death. Suddenly, she got attracted to him. She fell in love with him. She walked towards him and hugged him strongly. By rubbing his rib cage against her strong body, she reached under his black hood. Their lips got connected. Suddenly, she felt the cold flowing through her body, but she couldn’t resist it. “Take me,” she said. “No... I won’t,” the Death whispered. The cold spread through her body completely. She passed out. 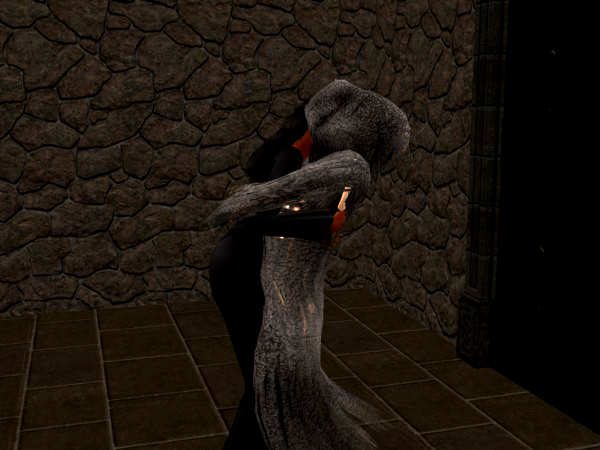 Someone Strange Is Coming To This World
The next day Olive woke up with a belly. 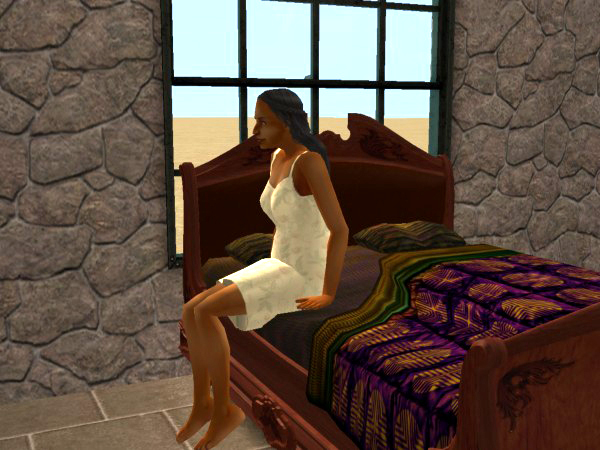 Suddenly she felt a pain. She visited the doctor, who said that she’s pregnant, and that everything’s okay with the baby. When she got home, her belly was twice the size of the one this morning. 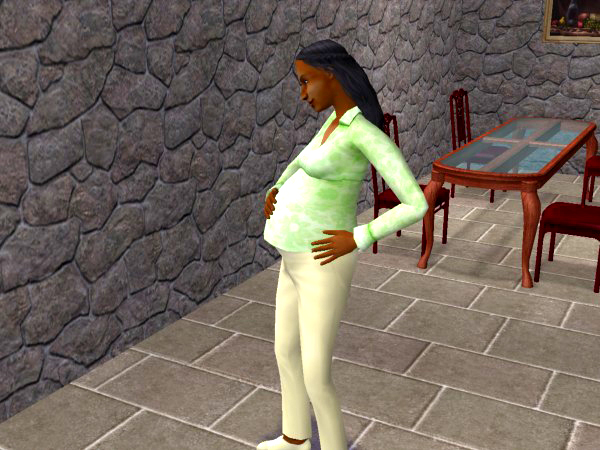 At the sunset of the same day, she gave birth to a baby with a distorted face. His eyes were small and he didn’t have his upper lip. Out of nowhere, the floor lit on fire, showing a message, “You have conceived a child with the Death. His life purpose is objective – to tell the world who the Devil really is. When they ask you for the father, say Rigger Mortis.” Very nervous at the moment, she named her child Nervous. At first it seemed like the infant won't survive, because he had very pale skin, and everyone in Olive's family were African Americans. “It’s probably the Death’s gene. Oh, I just hope you turned out as at least half human.”

Olive tried living a normal life after that night. She put the Death Note away. In a hope that she’s going to start a new, normal life, she proposed to Earl E. DeMise, but he ran away at the day of their wedding, when he found out about Nervous that Olive was keeping away from him.

She was heartbroken. After many years, she found her third love, Ichabod Specter. He loved Olive in despite of Nervous.

But one day the Devil has woken up inside of Olive again. She took out the Death Note against her will, and wrote her husband’s name down angrily. She felt the euphoria, that bad energy that gives her all the happiness. Carried by the evil force, she’s also written down “Earl E. DeMise.” The old Olive Specter was back.
topp

An Unfair Swap
Olive has gone crazy. She wrote every single name she heard on the street in her Death Note. The whole neighborhood got wiped out. Many people declared when they were in that desert, they felt a weird energy, so they named the place Strangetown.


Years have passed, and Nervous is 23 now. And Olive forgot.

The earth opened and the Satan rose up. “Give me your son!” he demanded. “No! Please, let me have him for one more day, please!” she shouted. 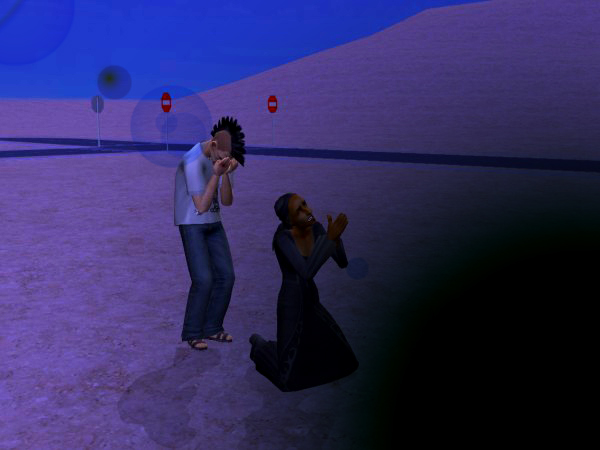 “I won’t. It’s been 23 years. He hasn’t finished his life course. But you’ve been cleaning the world of all the good, so I will award you with a child,” he said. “Return home. You’ll find an orphan at your doorstep. Take care of it. I will know if you write its name down in the Death Note. If you do so, I will kill you.” The Satan fell into the earth and it closed. Everything was like before. Olive, crying after her lost son, went home. And it wasn’t a lie; there really was an orphan at her doorstep. 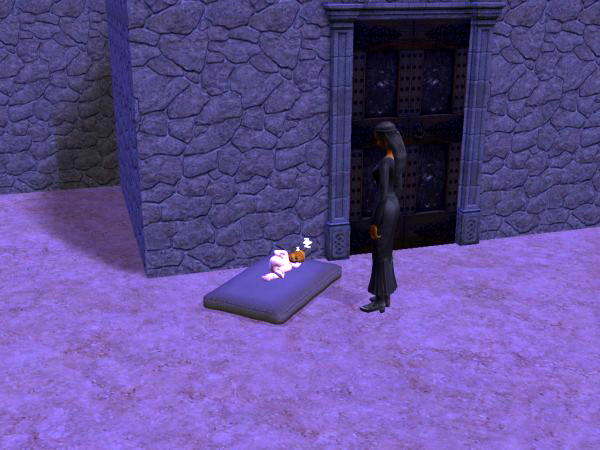 
But Ophelia couldn’t replace Nervous. Olive still spent years mourning after her son. Then, one night the Death returned to the Earth. 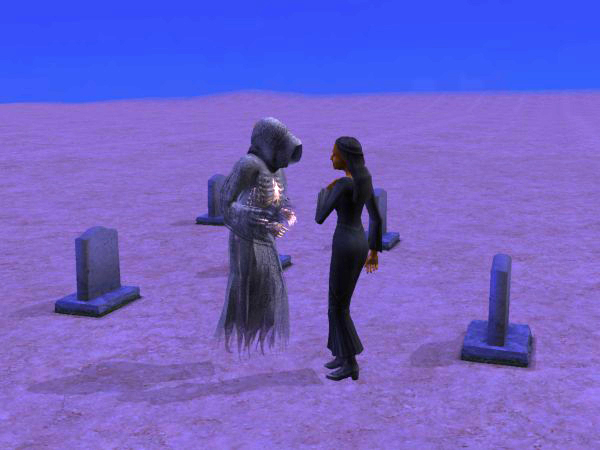 “I see you miss your son really bad. I will resurrect him, but you mustn’t get in contact with him. I will give him to the Beaker family, which just moved in the town. They're here to do some research about the energy that the Death Note is spreading through the city. Nervous is going to use them as a distraction, and they're going to make experiments on him.” Olive gasped. Right when she was about to respond, the Death cut her off coldly, “At least you’ll know he’s alive.” He vanished then. Olive was happy her prays got granted.
topp

The Unexpected Fire and The Conclusion
One day 13 Dead End Lane caught up fire. The whole place was burnt down, including the Death Note Olive kept under her pillow.

Since then, she’s relieved. The destruction of the Death Note broke the connection between her and the Devil. Unfortunately without it, she can’t resurrect all those Sims she killed.

Loki and Circe Beaker have been doing a lot of experiments on Nervous. They have called him "Nervous Subject", to pun the fact that he's their testing guinea pig. They have tweaked his genetics and replaced his father ID, who in their computer was recognized as an error. Unfortunately, in the middle of the process, he woke up and his father ID is now unknown. He tends to have mental breakdowns much more often after that experiment.

If any Sim who was killed by Olive Specter gets resurrected by another Sim, he or she will melt. All of their genetics and memories were burned along with the Death Note.


It’s been a lot of years. Ophelia is a teenager now, and Olive’s life is coming to an end. Will Olive get to know her niece Ophelia better before she heads to college, or before Olive dies? It’s up to you Simmers,


~ THE STORY CONTINUES ~
Back to top