Hi there! You are currently browsing as a guest. Why not create an account? Then you get less ads, can thank creators, post feedback, keep a list of your favourites, and more!
Quick Reply Print version
Search this Thread
Replies: 11753 (Who?), Viewed: 498782 times.
Page 460 of 471
Kligma

"Half a decade". Yeah, yeah. I've played the same "in-game" clan for half my life.

I've only stuck with a few of my sims that I had when the game first came out. They went through a lot of makeovers over the years. But they are still sentimental to me and treat them as the founders of my sims world.
AnMal

Setting up defaults. Paying close attention to what I download. Using an archive folder set up like the default database. STILL ending up with three replacements for "afbodyshortdressshoes". Also realised that the problem isn't how creators name their files in very different ways - I ended up getting confused over MY OWN freaking defaults, named in my own file naming system! Why is organisation of my downloads folder such a hopeless task?
Pideli

The stress of having a party, a date and head master scenario at the same time... And 13 residents. Why do I do this to myself
Omnia - Fantasy / Mythological / Medieval Hood
Ephemera MoreColorful - SimpleSkin Recolors
OnayaW

Sometimes i think about how alone i am with a rarepair bc it's not like the Cassandra Goth x Vidcund Curious i got started a few years back and a few people joined.

No, I'm all alone in a corner with my Pascal Curious x John Mole. It's hard to like a ship and be the only cretor for it ?
I build small houses *^*
pianogrinder
Forum Resident
#11481

If you see a CC clothing outfit, open it up with WinRAR to find out what it contains and you see a file called C/DISK it"s a sure fire sign NOT to extract that CC to your game.
KiraNettt

Quote:
I don't know. Certainly something not good.
Peni Griffin

In what context? It might just be your computer's name for its hard drive.
Ugly is in the heart of the beholder.
(My simblr isSim Media Res . Widespot,Widespot RFD: The Subhood, and Land Grant University are all available here. In case you care.)
pianogrinder
Forum Resident
#11485

No. It was a filename and it was an exe. type file
Peni Griffin

If you right-click on it, does anything pop up to give you a clue? On my computer you can do a security scan that way, and finding out when it was added through properties might tell you something.
Ugly is in the heart of the beholder.
(My simblr isSim Media Res . Widespot,Widespot RFD: The Subhood, and Land Grant University are all available here. In case you care.)
FranH

An .exe file?
Don't touch that sucker.
.Exe files can overwrite on the computer-it's an actual computer program.

.Exe is shorthand for "execute" and it's only used to install programs into a computer.

An EXE file is an executable program you can run in Microsoft Windows. Most EXE files contain either Windows applications or application installers. However, EXE files can also store malware distributed by cybercriminals, so you should not open an EXE file unless you trust the file's source. To run the program an EXE file contains, double-click the file.
Receptacle Refugee & Resident Polar Bear
"Get out of my way, young'un, I'm a ninja!"
My downloads of various stuff: https://www.mediafire.com/?r=wbmnd#myfiles (including funerals, here: https://www.mediafire.com/file/e6tj...albits.zip/file)
TadOlson

I've seen that atical about the sims and I've been known to play a town for a while though it wasn't easy with TS2 on my old computer when I played vanilla and kept having issues that were game-breaking.I won't havw to ever worry about those again since I've got my game Modded out now.I can see my Pleasantview game lasting for about 400 years of sim history and enjoy watching it grow into a city over the time span of it's life.
TadOlson's Blog
StrangeTownChick

Having gotten into Mahjong myself since the last time I played, I am impressed with the detail on the in-game tiles. 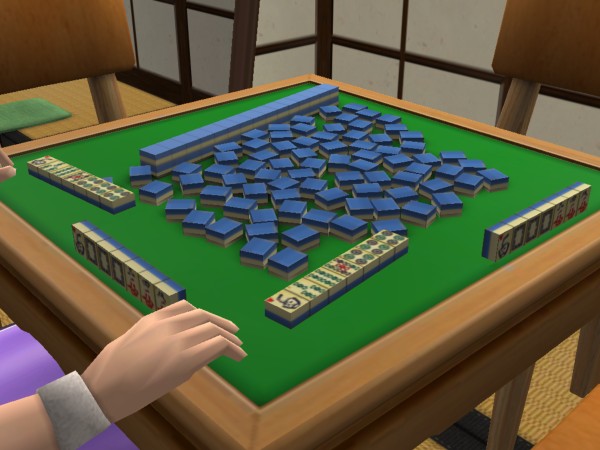 Although it seems everyone has the same hand, and I can't figure out why they've exposed the first tile in the line--it doesn't go with anything. Though, when I look closer, both of them have Mahjong already--maybe it's not as detailed as I thought. Well, at least the tiles look nice, even if the rules weren't quite followed.
I've got one or two things on MTS, but most of my stuff is on my main site here:
http://simcessories.blogspot.com/
(Now recruiting budding creators.)
Pideli

Quote:
However when they play chess they play legitimately. They move the pieces by the rules. But it's always the same particular game. Confirmed by my sims playing elite chess player friend who also happens to be very detail oriented.
Omnia - Fantasy / Mythological / Medieval Hood
Ephemera MoreColorful - SimpleSkin Recolors
Sokisims

Every time I see a youtube channel about sims 2, I subscribe, it also helps me learn English.
Orphalesion

I once read it's not just the same game that's played each time, but that it's some famous game from a championship, or something like that?
I also never thought about it, but doesn't that also mean one colour will always lose?
Avatar by MasterRed
Taking an extended break from Sims stuff. Might be around, might not.
FranH

The game that they usually play is a classic one (but I can't find the reference to it) and chess is always either 1) a draw 2)win 3)loss for one of the players, no matter if it's in Sims 2 or real life.

One color will always win-either black or white.

Also this from the Sims Wiki:

"Unlike The Sims, chess pieces are now separate from the chess table itself, and players can now watch their game in greater detail. While Sims generally follow the normal rules of chess, it has been noted that they may continue playing even after the king has been captured, which would normally result in a "checkmate."

"In The Sims 2, when one or two Sims are playing chess, the chess game is played out dynamically, and the pieces move or attack accordingly, while in The Sims 3 when a Sim makes their move, the pieces are all different."
Reddit:
"and like they actually follow the rules and stuff?"
"Yup. And IIRC the moves they make change depending on their logic level and they cheat if they're an *******."
Receptacle Refugee & Resident Polar Bear
"Get out of my way, young'un, I'm a ninja!"
My downloads of various stuff: https://www.mediafire.com/?r=wbmnd#myfiles (including funerals, here: https://www.mediafire.com/file/e6tj...albits.zip/file)
Orphalesion

No, what I meant was: "if they are always playing the same game, doesn't that the same colour will lose each time" ;-)
Sorry for not being clearer, even with my years of living in an English speaking country, it still shows sometime that it's my second language.
Avatar by MasterRed
Taking an extended break from Sims stuff. Might be around, might not.
AnMal

Orphalesion, I don't think that's a language thing, it just happens to be slightly ambiguous. I want to know the same thing now - I always just assumed it was random who won and who lost, but if they follow a specific chess game I suppose it can't be?
FranH

It's all right, but it's not always the same outcome-professional players who play the 'classic' Grand Master games of chess have sometimes come out with different endings than has been done before-when they're playing it out-if they take a different tack mid-way through the game to a different conclusion.

It's why there are entire libraries for chess players who literally memorize the grand master games to play.

I'm not too sure that's true about Sims 2 chess games-I've never followed a game before.

I've also noticed that sims yawn a lot while playing mahjong. Did they think the game can't be fun or what?
I've got one or two things on MTS, but most of my stuff is on my main site here:
http://simcessories.blogspot.com/
(Now recruiting budding creators.)
Kligma

They yawn when playing don't wake the llama, too. I always took it as taunting other players implying they're taking too long to make their move.
I am Error.
pianogrinder
Forum Resident
#11499

With my usual slow pace with my creations, I should probably start again on the Christmas-themed lot I'd started right around the holiday last year if I have any hope of having it out by December this year! (not even kidding)
Welcome to the Dark Side...
We lied about having cookies.
Back to top