"So, then I got an affair memory, because someone can't be single for more than five seconds."

Neither Seb or Tessa noticed what Vermilion was saying, because they were staring at a wrapper. Eww.

Llama Mascot photobombs the hot tub woohoo video.
Simblr.
Asks are always open, even to anons. I will always reply to asks, and I do my best to be cordial/less snarky than usual.
Peni Griffin

Skylar, I don't think the baby needs a booster seat yet. Hold your horses.

Everyone else is mourning the death of the host, including the pets, but Georgette Skirt's too busy for that!

I knew Jeremiah Gavigan had to get out of bed to answer the outing call, but I expected him to change before we got to Casa de los Widgets.

Apparently everybody else bailed in embarrassment, but his bride Marsha staunchly stands by him as they sit down in the fanciest restaurant in town.
Ugly is in the heart of the beholder.
(My simblr isSim Media Res . Widespot,Widespot RFD: The Subhood, and Land Grant University are all available here. In case you care.)
Fivey

Loki is so tired of his daughter's (and her boyfriend's) eating habits, he stabs himself in the nose with a spoon.

Teddy´s pee is like acid. Straight after he was done, the color mesh of the toilet vanished. Is that crazy or what? 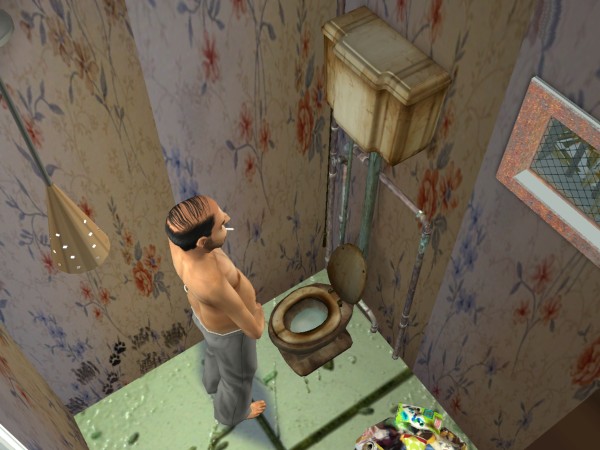 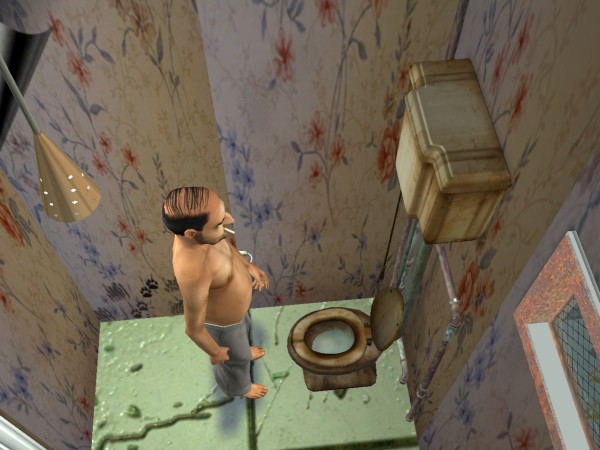 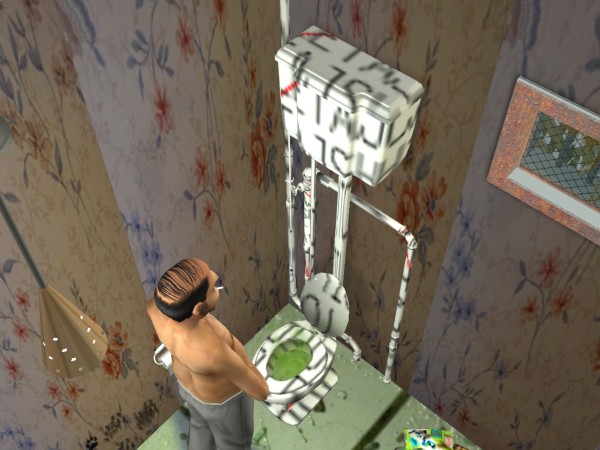 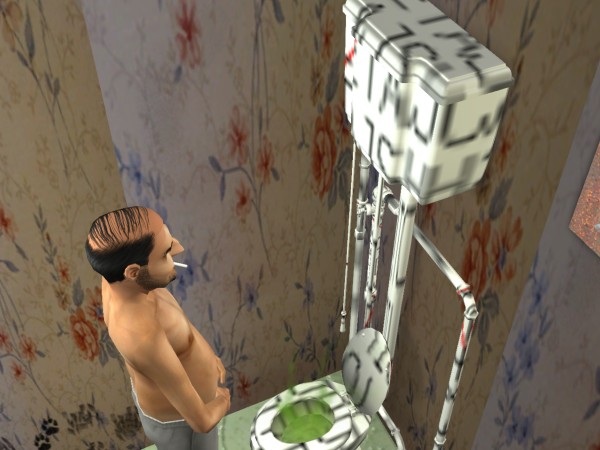 I happened to freeze at the right moment to capture this...

I love his expression and the gesture, like, "Seriously, honey? Do you mind not decapitating me with the plate? And in front of the Headmaster too!"

Althought why he's thinking of a magician's hat is beyond me. And his wife is totally oblivious.
Flarz
Field Researcher
#132

The postman turned into a red and black glowing something........no idea? 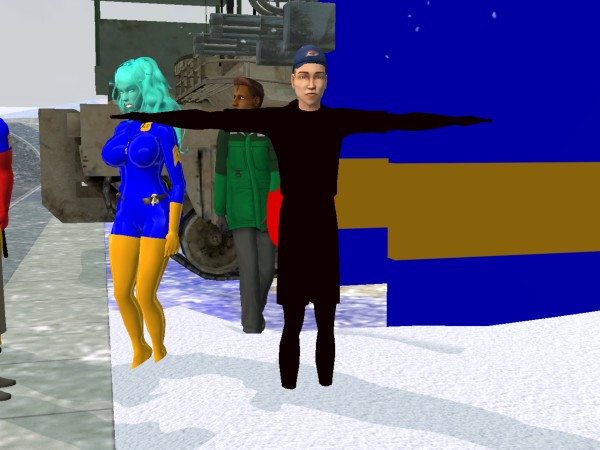 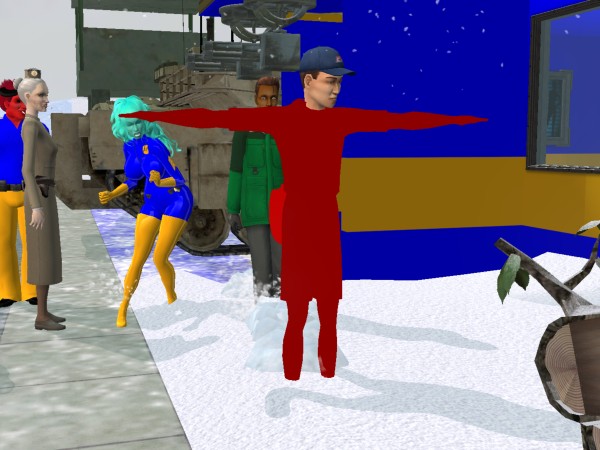 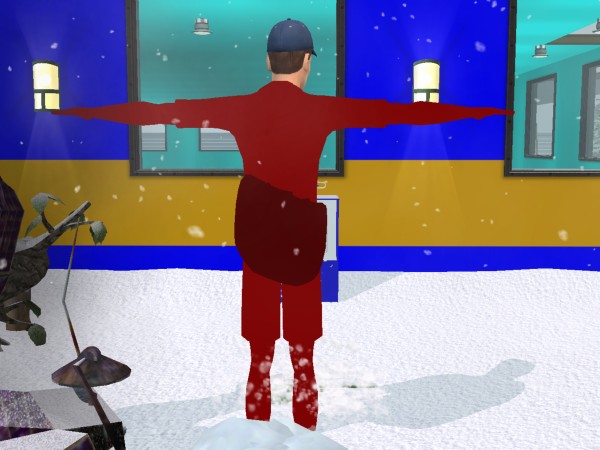 OMG, you're right! It totally looks like a head on a platter!
xsoburg

You've probably seen 'normal' sims dealing with the Social Bunny, whenever trying to heal their own depression by hugging, telling jokes, sitting still with the Bunny standing beside them until he goes, or getting into a fist fight...

But what if the Bunny went head on with a Ninja?

For some reason, this old lady ALWAYS hot tubs in the nude.

My bartender is like this every time I see her:

Justin Kim agrees to a game of Kicky Bag in the public restroom:

Lastly, bear-handed fishing has never been this easy!

I didn't realize when I set up the wedding arch that the disappearing willow tree would allow the neighborhood deco windfarm to be so perfectly framed.

It's a little hard to see, but Amanda Ruben apparently stabbed Heidi McAuley through the chest in retaliation for her blocking the good fishing spot.

Playtesting Widespot in the full game, I saw this townie decide she wanted to swim in spite of the cold.

And my very favorite shot from developmental play in Widespot: Woody Weiss comes charging in to tell his big sister Penny about his good grades while she and Rhett Hart are still sleeping off her impregnation.
Ugly is in the heart of the beholder.
(My simblr isSim Media Res . Widespot,Widespot RFD: The Subhood, and Land Grant University are all available here. In case you care.)
UnicornTheDinosaur this happened like four times, and with only one of the twins. apparently she wanted to hold it backwards?
Effelenn

Okay, it's happened in my game now:

A toddler learns of the promiscuous Mystery Sim ...

Lastly, in a house with at least 3 toilets and 3 people who need to pee, WHY DO THEY ALL HEAD FOR THE SAME TOILET IN THE SAME ORDER?!?!?!

Why is my yard full of boys?

Hey! We can't see the baby! And neither can the kids who belong to this family, who we won't allow into the room!

What the - the asphalt at the corner of the Kim household lot is apparently asleep and stinky?

I tried the carnival bouncy castle at a wedding in a Widespot playtest, thinking the bride's little brother and sister could play on it, but apparently that's not what it's for. I wonder how many layers of guests it will take?
Ugly is in the heart of the beholder.
(My simblr isSim Media Res . Widespot,Widespot RFD: The Subhood, and Land Grant University are all available here. In case you care.)
Effelenn
Lab Assistant
DELETED POST
1st Jan 2013 at 6:49 PM

I'm mad because I didn't take a picture of this. The carpool came but the driver had sunken below the car and the pavement, leaving their arms on the steering wheel. It was bizarre.
Meh.
M.M.A.A.

I had that happen, you might want to check the older version of this thread, v8, the last ten pages of it, or so.
Please, call me 'mmaa', saves time.
Learn how to use your neighborhood (terrains) efficiently!
How to avoid neighborhood and game corruption?
The Customized Sims Wiki
a_az13_a

After my crazy cat lady had made sure the kitties were all okay, I decided to go check what the welcome wagon were doing. As you can see, Nancy didn't quite get the hang of it. Call me Abi if you want, it's easier to type than my username!
beafish123

Just let this sink in for a second. Santa laughing while the x-mas tree is one fire. In the snow.
"A man who carries a cat by the tail learns something he can learn in no other way." -Mark Twain

"I don't usually burn leaf piles. But when I do... I burn the tree..."
I moved my downloads to Simblr thebleedingwoodland
My newer quality downloads on my blog The Bleeding Woodland
a_az13_a Okay Daniel, I understand that you're only two days away from becoming an elder and are possibly starting to go a bit senile.. but seriously, you put the baby down before you get in the shower.
Call me Abi if you want, it's easier to type than my username!
kpcca2010
Lab Assistant
#148

I don't intend to post a bunch of pictures of Widespot now that I've started playing it in my full game, since I don't want to accidentally steer anyone toward playing it my way, but these pics seemed to belong here: For starters, this could happen anywhere. I had Junior Mann buy the General Store, and Phil here is having trouble locating the merchandise. He was very grateful when Junior came out and suggested that he look inside the building. At the end of a date, Mary Land romantic kissed Valentine Hart, ran into the adjacent bathroom to throw up, and then gave him the Smooch of Farewell. No one knows at what stage of the evening Valentine's son Rhett came in to play videogames. But Valentine, much cheered by Mary's generous sympathy, is starting to pull his house out of the disorder it's been accumulating since his wife's death, beginning with that huge pile of homework on Goldie's desk. Some girls might be embarrassed at being helped by a father attired in his drawers and smelling like woohoo, but Goldie is a Hart! Very little embarrasses her! And finally, Rich Mann comes home after a hard night's work and immediately seeks out his wife Lana. Toward whom he's suddenly gotten really demonstrative lately, for some reason.
Honey I'm Home by Peni G, on Flickr
Ugly is in the heart of the beholder.
(My simblr isSim Media Res . Widespot,Widespot RFD: The Subhood, and Land Grant University are all available here. In case you care.)
Flarz
Field Researcher
#150 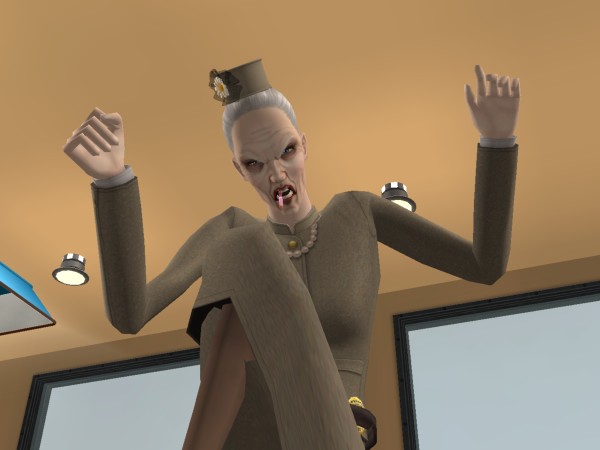 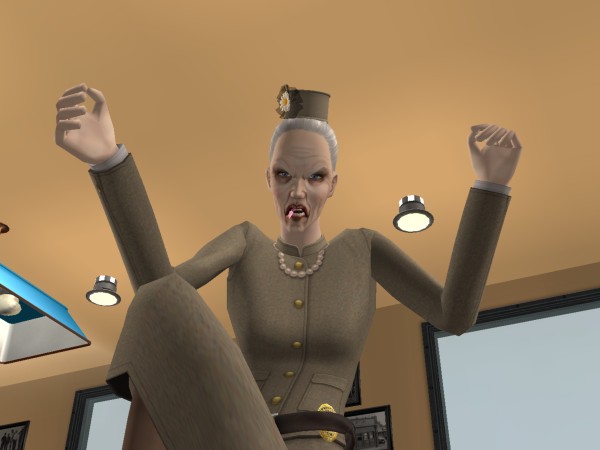