I still love revisiting this long running thread, even though my pics have since been deleted long ago. I like checking out new pics and ones that are still up.
AwooWolfWoof
Test Subject
#152

I remember moving them to a new house every time I play. This time around, I think I'm just gonna keep expanding.
kkffoo 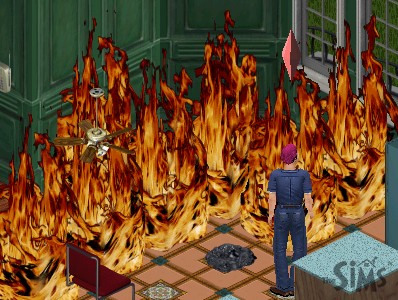 Their house IS ridiculously tiny. They must live mostly in their yard, which I guess you can do in The Sims, since it never rains or anything...

I tried moving them once, but they didn't feel like Bob and Betty without their ridiculous house. :-)
"You must be the change you want to see in the world." -- Gandhi
AwooWolfWoof
Test Subject
#155

Played a bit with the Goth family. I forgot on how their house in the first game looks pretty spacious on the outside but is not so much on the inside (When I think of their house, the size of either 165 Sim Lane or 13 Skyborough Boulevard always comes to mind). Another thing is the uneven terrain and that when greeting guests, the guests would often than not go through the back (Well, the dining area is in the back so that's not a waste.)

Not wanting to touch 5 Sim Lane (Though I'm thinking of making it look more old and just leave it vacant), I decided to just give the Mango Manor (the house next to Mortimer's parents house) the Goth family touch. Changed the windows, flooring, and wall paint to match 5 Sim Lane. Moving in Mortimer and the family now

Yeah, when I played the Goths, they were always getting stuck in doorways, one trying to go into the bedroom while another was trying to come out, then putting their hands up and shrugging for what seemed like HOURS.

I expanded the Goths' house, so as to have more space for them to move around and to have skill objects. But the game didn't want to give me any more roof, so the new addition was open to the sky! I've heard of skylights, but this is ridiculous. :-)

I'm amused that Will Wright originally wanted to make a house-building simulation and added the people only to have someone to react to the houses, because the houses he built seem ... how do I put this politely? The houses he built seem sub-optimal. :-)
"You must be the change you want to see in the world." -- Gandhi
AwooWolfWoof
Test Subject
#157

. When entering the house and telling them to go do something in the living room, the would go through the back (Probably because of the door there?)

Visitors would ring the rightmost door and with the kitchen on the leftmost side of the house... the kitchen needs to be moved

Gonna be moving the Pleasants here. Could probably use a bit more sprucing. It feels like they're going to live in a box

Old Goth Re did House
I remember I loved to add on to the Goth house and make a pool with an Island. And the Ghosts that haunt the Goth mansion at night love to swim by the way. I hope I don't totally make a fool of myself trying to upload these pics as I haven't done this for years. Here goes.
Corylea

The GHOSTS love to SWIM?!?! Oh, wow. Thanks for passing that along; I'll have to try that!
"You must be the change you want to see in the world." -- Gandhi
simsample

I remember trying to contain the ghosts by putting them on an island in the pool, only to find it didn't work!

Ghosts Swim!
I found some pictures:
They swim, walk on water, and sometimes get confused and swim on the Island.
zorba2357

. Probably gonna add one more room on the encircled part on the first image and then finally start buying them better stuff.
AwooWolfWoof
Test Subject
#166

And they ended up moving back

. Just decided to expand their house a bit. People still enter from the back to get to the dining area though

Yep, they exchanged rooms. Originally, I also placed a double door there until I realized how awkward that seems JAKERS, someone's household import/export component has been busy as of lately of all of these roomies, OF COURSE Megan, one of the city's 85 mayors, would be the one making noises post-people-gathernig-night blues Omnimom as the house decor revelation of the domestic perceptive design and HEY, turns out one of the older grandfathers of what we know as "plumbob" these days (a blue circle), the classic archaeological sprite derivative mainly from the 1998 demo, can still be found within the sprites bank. all we had to do is to ask the game to display the "head icon" instead of "route icon" as the draw_routes cheat code was doing its usual job
Code:
MakinUnleashed
Test Subject
#171

Speaking of the Newbies, last night I opened up The Sims Complete Collection (Pirated version I downloaded somewhere over this comp won't let my The Sims 1 CDs work cuz the CD Drive is broken) and let 'em kiss and now they luv each other. Like light pink heart, but still.
Prismatic

So, 6 years and a month later. Have another Makin' Magic picture, because it's almost spooky time.

Since Simitone allows for up to 5 floors, I made some quick changes to Alfred's B&B to look more like the Bates house from Alfred Hitchcock's Psycho on which it's based through the use of some CC. Note how tiny the trees are in TS1.
(Don't judge me for posting a picture of this lot again, Magic Town is my special interest okay!) 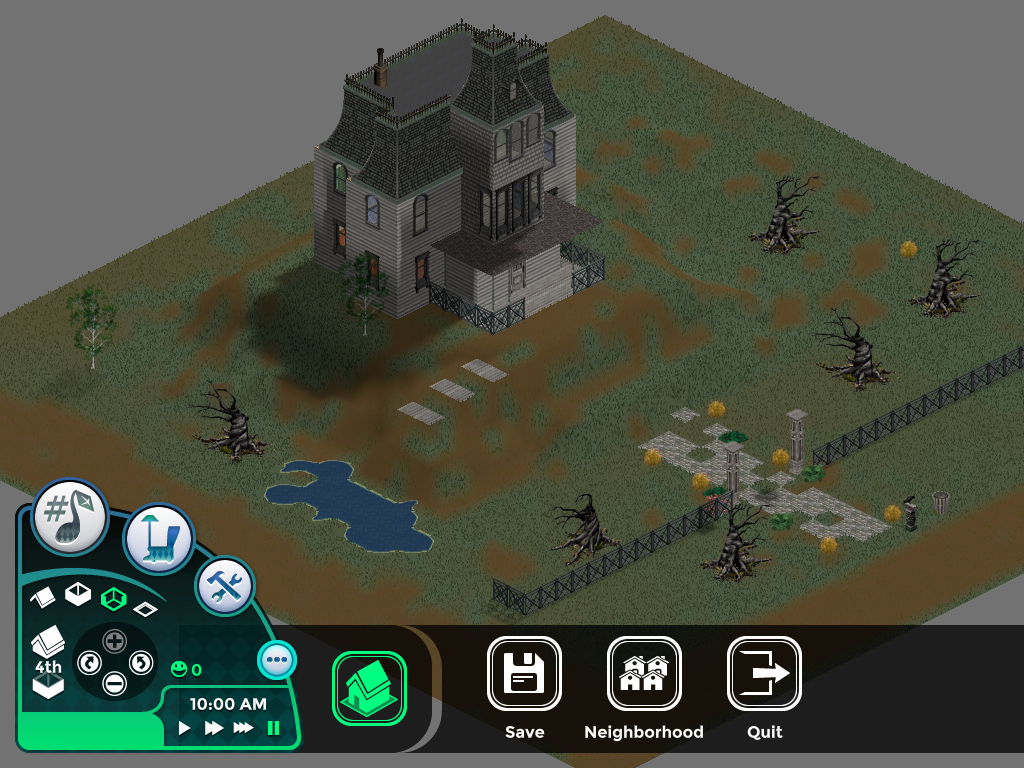