When Dina Ray moved to her private Island she took her bookshelf, her TV, and her stereo with her. The bookshelf had beginning cookbook, handiness book, and logic book in it. My island has a beach lot, so I went into edit town and placed an auto-soil for an apple tree and lettuce plant and a seed spawner. Once she gets skilled up enough, I'm gonna send her off to university. Dina wants to start a blog, Homesteading for Beginners, and improve her painting and athletic skills as well. I'm hoping that she can get a scholarship. While she's at university, she's gonna pick up a spouse, a bunch of books, and stock up on food/seeds. I'm hoping any children get an imaginary friend doll I can make real to get a spouse for them so I don't need to send them someplace too. I only have university and I don't know how NRAAS Travel would work without WA.
Advertisement
icefire33

Thought I'd play this challenge again because I always enjoy it, I haven't really taken any pictures but just snapped a few of my family so far.

This is Claire, my challenge founder, or as I've started calling her, Perma-Preg. Pro-tip: for a real challenge, set woohoo to autonomous and make all woohoo risky...

That's her husband Liu, they met in Shang Simla and have been inseparable ever since (seriously, if you give them the chance, they're like rabbits!)

Their oldest son, Fen, and his imaginary friend turned girlfriend Lola are forming a band, they're going to start generation 3 for me, unless surprise baby number 4 is a girl.

Forgotten middle child Hai has just turned into a teen, I'll be honest, he's probably going to swim out to sea and never come back...

Baby Chen is due to age up any day now, he's miraculously learned all the necessary toddler skills despite my complete lack of interest in his well being - Claire may be permanently preggers, but she does have the maternal instincts to back it up thankfully.

Their towering mansion is kind of ridiculous looking, but I've put a ban on any electronics or modern appliances (with the exception of a fridge and some rustic looking plumbing) The pizza oven has been their salvation. Maintaining the garden is a full time job as well, but Claire robbed every growable she could find on the last trip to Shang Simla, and coffee beans make a surprising amount of simoleans.

That's my family so far! Thank the sim gods for NRAAS portrait panel, because this family is getting huge.
lidalisova
Test Subject
#254

Can main character have an occult life form like vampire?

Has anyone finished this challenge?

Has anyone finished combined challenge of this and perfect genetics?
lidalisova
Test Subject
#255

Trying to start joint challenge of this and perfect genetics from James Cameron a.k.a. Avatar.
He has blue skin tone, blue eyes and blue hair.

What should I do with horses randomly rendered on the lot? Is it allowed to socialize with horse to the first character or anyone on his or her offsprings?

The burglar came just after I started to play!

How on earth did my founder become a one star celebrity all by herself on an island? Now I have to deal with paparazzi in this save file! Does anyone know how to remove a star once earned?
PeekASim
Test Subject
#258

Quote:
I definitely will try it

Is the world compatible for mac?
Skyegal19

How is this possible to turn off some packs off if you have already installed them?
tunafishfish

I ended up working the paparazzi and celebrity status into the story, and then when I downloaded register and got rid of them, I was able to say that the public was no longer interested in the story.
samhain

After a long hiatus I'm back with my family, I moved them to a bigger island because watching them constantly tantrum because they couldn't move was getting old.

Weirdly, Hai has not only survived his teen years, but somehow become my favourite family member and is going to be my heir for this generation. He travelled to France where he met and fell in love with Jolene Montaque, they just got married on the beach.

Sadly Lui didn't live to see the big day, but Chen is dancing with his mother Claire instead

I just love this picture

And just as the party was coming to an end, baby sister Isabel decided to age up

She got her mother's smile.
ModestPixels

Ow wauw your challenge looks like fun. Do you post the progress anywhere? And I Love what you did with the house looking like an apartment flat.

I'm starting this challenge. Ive done it before but now I'm starting it for a youtube series.. I'll post pictures and the story line soon! The girl I chose comes from Neverglade. She has her parents and sister still living there. Very rich family.. She was used to the luxury and now she has to survive.. It's going to be intresting!
My Youtube Channel
TrillianRikku

Hello I'm new here and liked to try this challenge. I downloaded it and doubleklicked it, but I can't select the world in the game. It is in the folder InstalledWorlds. Is that wrong? Can you help me, please? I've never done something like that before.
Asha7
Test Subject
#269

ninjafan, try putting the sims3pack file in the Downloads folder within your Sims 3 folder. Then go into your launcher and install it from there like you normally would.
ninjafan
Test Subject
#270

I use v2 as long as I don't have Island Paradise. It's a 7z-file, not a sims3pack-file and somehow that doesn't work either, it doesn't appear in the launcher to install. Do you have another idea?
Ghost sdoj

If it's a 7z file, that means it hasn't been extracted from the archive yet.
Since I don't know if your computer is a PC or a Mac, I'm just going to give you a link to the wiki article which will help walk you through getting it extracted and installed, as well as answering other questions you may have.

http://simswiki.info/wiki.php?title...p:TS3_CC_Basics
I am Ghost. My husband is sidneydoj. I post, he downloads, and I wanted to keep my post count.
Group for Avatar Makers* Funny Stories *2017 Yearbook
ninjafan
Test Subject
#272

I think that worked. Thanks a lot!
ColorfulxPlumbs
Test Subject
#273

I thought this challenge seemed really fun, so I'm trying it and posting my sim's, Coral Marino's, adventures living on an isolated island to a tumblr! Anybody mind checking it out? http://my-midnightsun-challenge.tumblr.com/

I also planned on using the childrens' toys as future partners, since I also don't have WA. If you have Nraas Traveller, it would allow you to travel to other towns (ex. Sunset Valley, Bridgeport, Isla Paradiso, Lucky Palms, etc...) you have installed. Since you could interact with the residents of that town, I thought it might be allowed to have them move in with you. I'm not 100% sure it's allowed for this challenge though, but I know it can be done since I've done it with other households of mine.
Lei
Test Subject
#275

This is so fun! I've never had the patience to play a challenge except from vanilla Legacy from Sims 2, but I really like it.
Started off at the Midnight Sun island but had a little problem with the midnight sun and the lack of space, so I found the beautiful world "Ö" in this thread and moved there. As a Swede, it makes me feel at home. 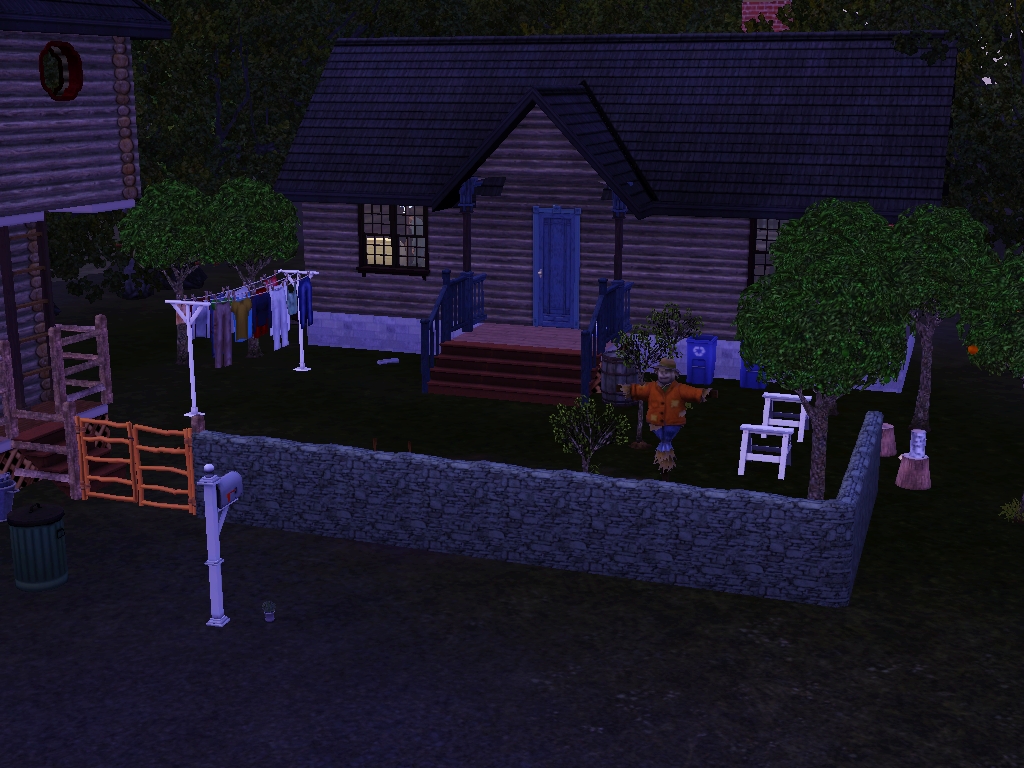 I combine this with the Perfect Genetics challenge, starting off with a cute little woman named Selene. Light purple hair, dark turquoise eyes. I built her a quite traditional Swedish homestead with a two-room cottage, an outhouse with a loft and a garden. In the beginning on the first island, she painted until she could get to China, but as she found some tomatos there and started gardening, nowadays she mostly live on the earth. She married Zhan Su after a short flirt (though she met his brother first) and he's turned out to be the ideal husband and father, taking care of the children, as Selene hates children and treats them with disrespect! 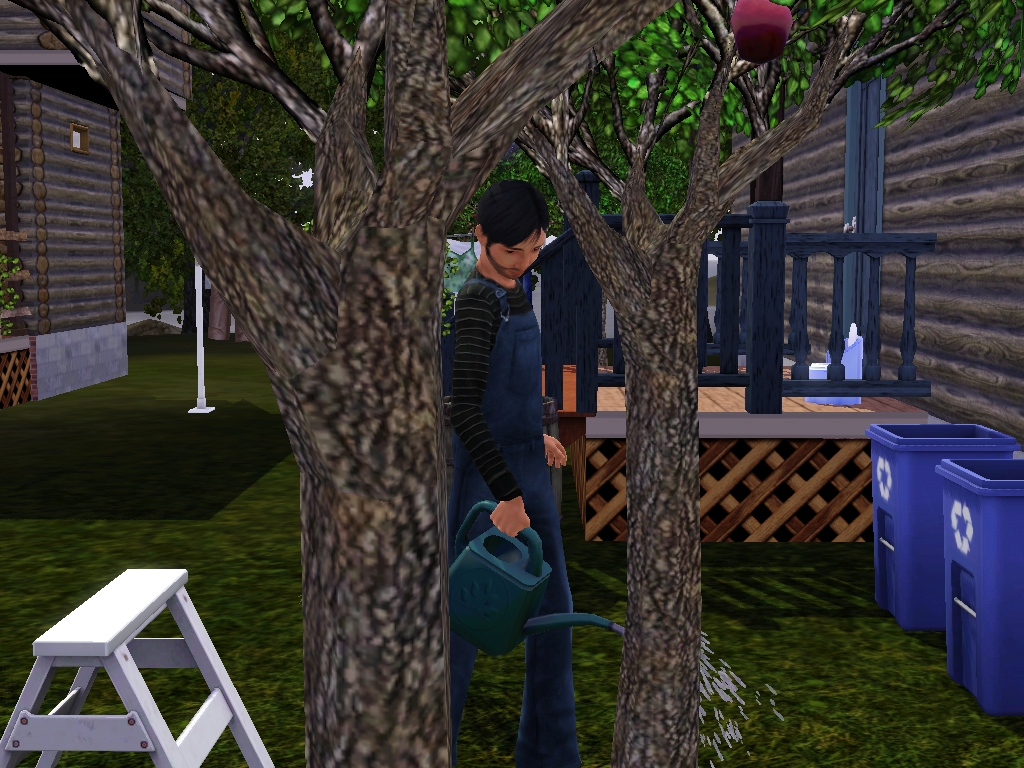 Zhan turned out to be a great husband 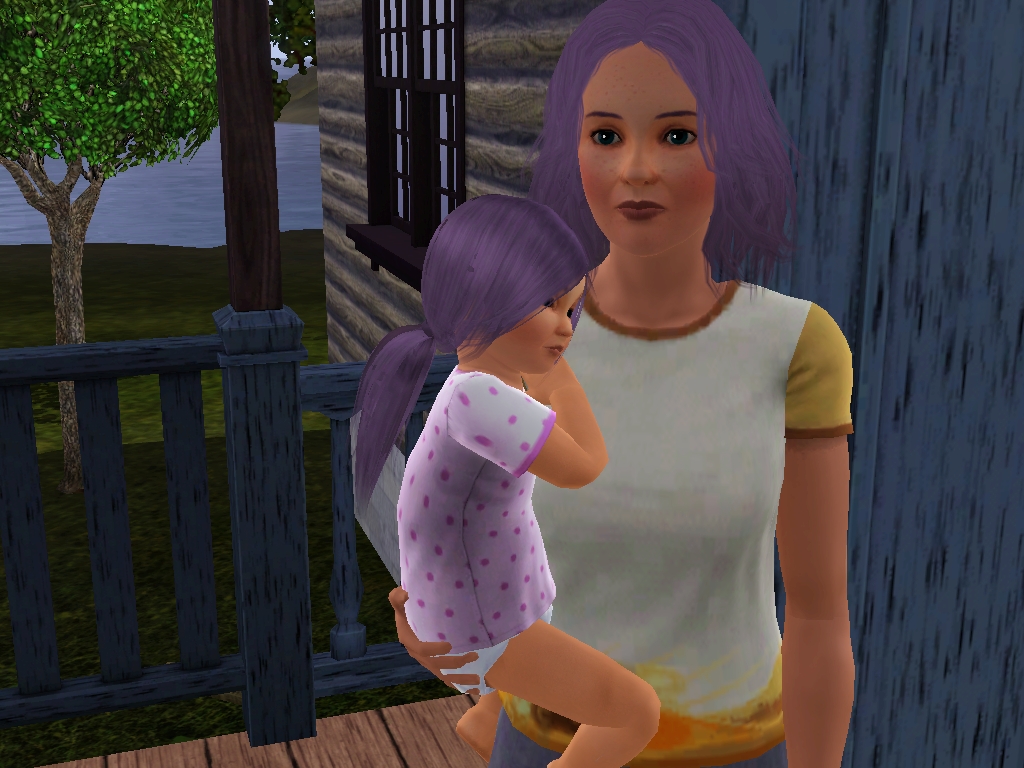 Something as unusual as Selene holding a child. This is her youngest, Sophia.

I'm leaning towards explaining the whole genetics thing with a rare disease and Selene's weird genes giving immunity against it. Selene's and Zhan's first son, Elia, was unfortunately blond, but he's still alive as he would grow up to become a teen and a good farmhand before the other children. Then they had twin boys, one with Selene's purple hair and turquoise eyes, that is still alive, just turned into a child. The second boy had his father's black hair and died under mysterious surcumstances. Before realising she had an heir, though, Selene got pregnant again, and so now the family have two children with the right genetics. Evind is a child, and Sophia just turned into a toddler. She is developing the best personality so far, so I'll might not let Evind become family heir. Or I'll let them both live and see who's most lucky finding a partner. We'll see... At least I'm having fun. 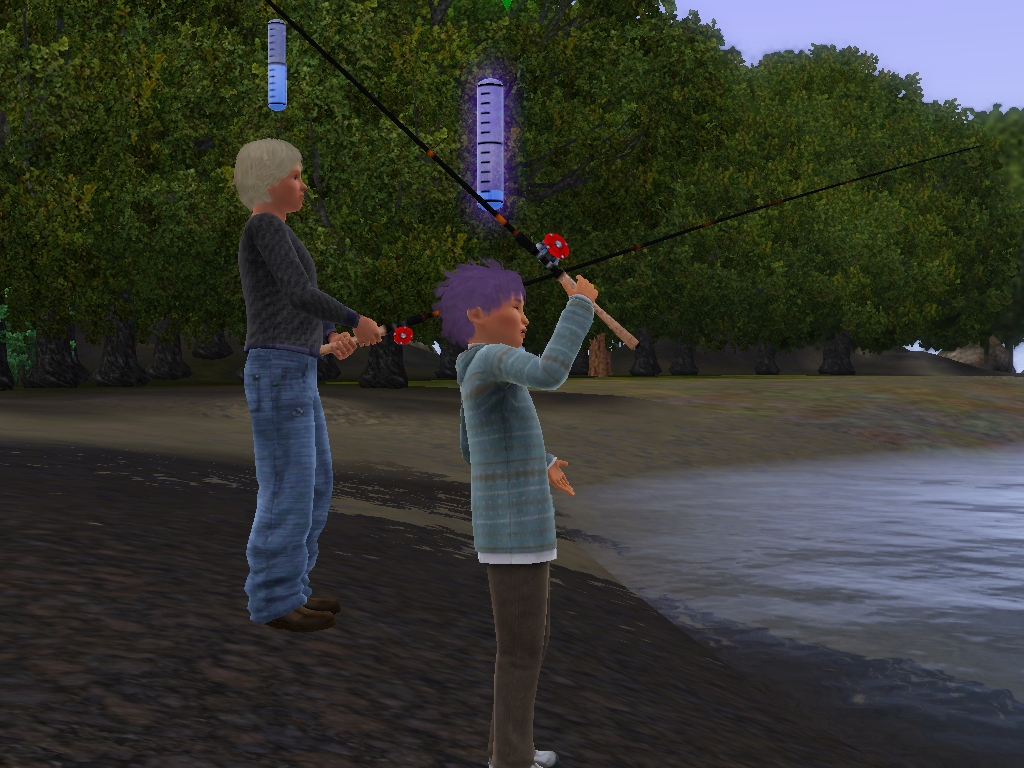 The two older boys fishing together. Blonde Elia will at least live until Evind is old enough to take the role as farm hand. He's still just playing around though.
Back to top