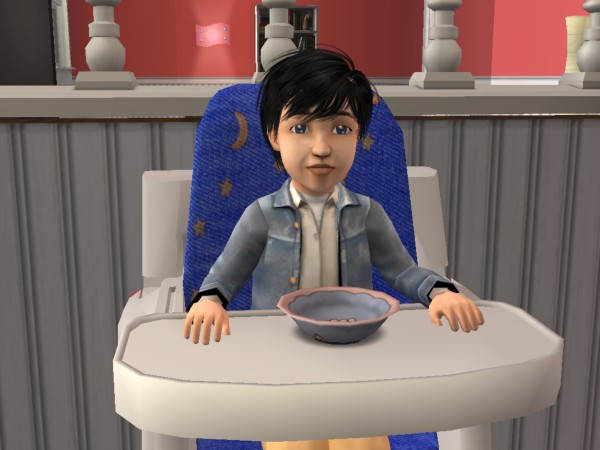 Henry Broke finishing up his breakfast. The last child of Brandi and Skip Broke. 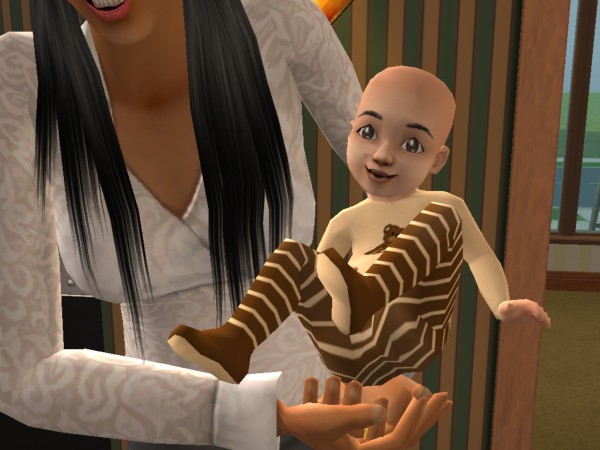 Destiny Goth on her birthday! The last child of Mortimer and Bella Goth. 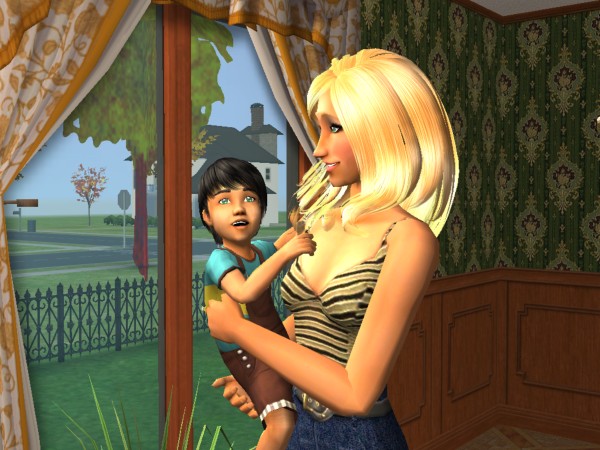 Here are some baby pictures!

Jodie Larson just had twins with Peter Sims, Peter was working, but brother Jason was home at the time.

Venus and Aeric Walton (from Orike's pseudo legacy, if anyone's read that) had their last child, a girl named Rain

She looks just like her father, only she has black hair instead of blond, which is different from her older brother and sister who have the alien skin and purple eyes from Aeric.
I have a simblr now! Check it out: simblr
Had a long day and need a laugh? Check this out for funny sims stuff!
squirrelflight77
Lab Assistant
#28

Here little Rene is, just a few minutes old and still in his mother's arms. He's to be the third - and final - child of Travis and Jennifer Barden, one of my all-time favorite couples. He has his mother's blue eyes and his father's brown hair.

And another picture, showing Jennifer - Bad News Bev and her son Dirk by Peni G, on Flickr Eva Point. I know this is the part where I'm supposed to whine about how ugly the toddler is, but by Drama Acres standards she's not ugly. I do, however, regret that she has her mother's nose. I cheesecaked Mom (who grows to elder soon) so as to double my chances of reproducing Dad's nose. Oh, well, this is only the first one. Well, shoot. When Adena Point wakes up from her nap and big sister Andice grows her up, she's also got the wrong nose! Those are nice outfits they grew into, though, and at least they have different hair and will be easy to tell apart. Count blessings.
Ugly is in the heart of the beholder.
(My simblr isSim Media Res . Widespot,Widespot RFD: The Subhood, and Land Grant University are all available here. In case you care.)
M.M.A.A.

Oh sorry, Peni, I really thought Clovis' nose would get a chance. Sadie's genes are a killer!

You're not the only one with this problem:

Meet some of the kids produced by Smith (custom Smith family, not the one in Strangetown) family:

Meet Claire Smith (I decided this family, should have all the common names, since Smith it self is a common name), eldest of the Smith kids. That's her father, Mitchell (his father and mother are former Garden club admins Mathew and Jill Smith, he also has a twin sister (on his left in the pic below)): Anyways, on his wife's, Susan's, second pregnancy, she naturally conceived twins since her husband has a twin, meet Johnathan: Both twins look like their mom too! I really though I'd get something from Mitchell, but tough luck!

Anyway, hopefully in the future, if they ever decided to have a child, it should look their Mitchell, I too want his nose with those straight eyebrows he got from his dad and mom, respectively.

P.S. They pacifier and batbox were rolled/used, but their mother's genetics are so strong, they just have a few bits from dad.
Please, call me 'mmaa', saves time.
Learn how to use your neighborhood (terrains) efficiently!
How to avoid neighborhood and game corruption?
The Customized Sims Wiki
beafish123

These are the "quints"

They were meant to be functional twins from different fathers-but no, I got quads. (And a singleton)

I swear, for only having a 4% chance at multiples(2% for twins and 1% for both trips and quads), I have LOTS of multiples.
"A man who carries a cat by the tail learns something he can learn in no other way." -Mark Twain

It was time for the Hawkins twins to grow up to toddler and I was in suspense. With what bizarre aberrations would the Hawkins genome present me next? Or would the bland Gavigan genes of their father hopelessly dilute them? First, Pigeon grew up Osprey: Holey mother of cheese. Those all-too-regular Gavigan features combined with that full sensuous underslung mouth...if this boy has the Hawkins pheremones that make them scatter bolts like confetti all over the neighborhood and has innocent townies following them with their tongues hanging out, he's gonna be dynamite! So much for dilution! Crane is the spittin' image of her granny, Kitty Hawkins! (See elder thread to make point-by-point comparisons.) I am officially no longer worried about the dilution of Hawkins genes. And Tom Ottomas's son Sam has blond eyebrows! It appears that Tom's recessive blond gene came out to honor the source in the wake of Samantha's death.
Ugly is in the heart of the beholder.
(My simblr isSim Media Res . Widespot,Widespot RFD: The Subhood, and Land Grant University are all available here. In case you care.)
Amendria
Test Subject
#33

Like I said in the last thread, I have a lot of pictures, lots of baby and toddler, so I will start posting some, I'm seeing a trend here 4-5 pictures a post seems to be a good number, right?
ohgreatone22

It's 4 pictures a post, check the sticky topic at the top for the guidelines.

Here are some more of my toddlers!

Sorry, I didn't zoom in on him.

Scarlett London being held by her dad, Larry London:

I changed her hair and outfit later, but I didn't take a picture of it.
I have a simblr now! Check it out: simblr
Had a long day and need a laugh? Check this out for funny sims stuff!
StrangeTownChick

May I present: the Runner triplets!
Carter, Nathaniel, and Simon, the first set of triplets in Stonebridge as well as the first babies of the fourth generation. Of course, they're not babies anymore, they're toddlers!

Daddy Danny bathes Carter while Simon plays in the water.

It's Reunion's Day in Stonebridge, which is their one holiday. Every Saturday you invite over the household of the family member closest to you and have chili. Mommy So Wen (who, yes, is an alien) is inviting over her father and his family while Nathaniel has breakfast of milk and Carter has breakfast of teddy bear.

Carter's grandpa (or rather grandpa-to-be, being So Wen's dad's fiance) spends some quality time with him.

And the boys get their first hot meal, the Reunion's Day chili.
I've got one or two things on MTS, but most of my stuff is on my main site here:
http://simcessories.blogspot.com/
(Now recruiting budding creators.)
simmer22 This is Paris and her baby sister Kai!

Have you ever walked into a room & forgot why you went in there?
What if God is playing The Sims & he just cancelled your action.
Adopt-a-Sim My Creations My Tumblr
Orilon

Vidcund Curious's daughter from his scripted alien abduction as a toddler. I didn't like the way her nose turned out when she became a toddler, and time will tell when she grows up if she looks more like Vidcund or her PT.
simmer22 Beau as a toddler, Malcolm IV is holding him 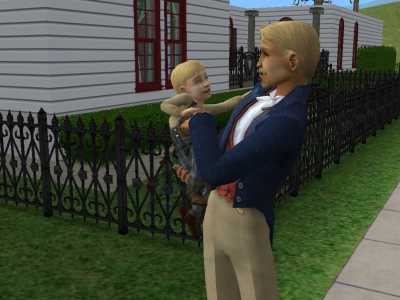 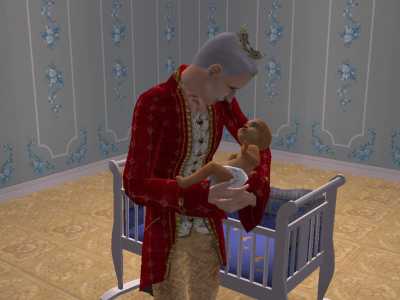 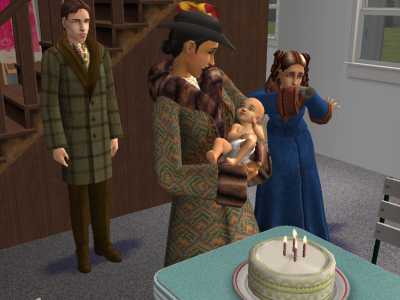 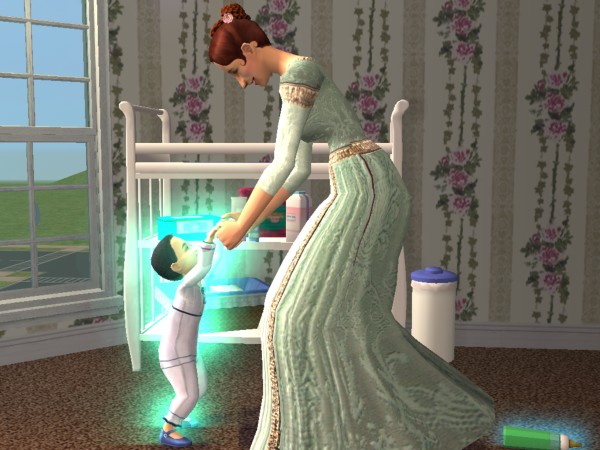 I had no intention of getting these two married unless someone rolled the want seeing Dagmar is romance and David is pleasure. They are poor and live in my Down On Your Luck hostel. Forgot I'd put on risky woohoo and wouldn't you know it, second time and I get a baby jingle. Then I check on the blender and see 2... Also I've put on trips and quads. *bites nails*

Luckily it was only two. Did you know toddlers can use toys under the open kitchen benches? Saves space.

Living here is no picnic. If the twins don't wake them up the neighbor with his incessant loud parties does. Their one tile beds are a squish, but what can you do in one small room.

The girls do make up for it, even if they are 2 neat point, mean as snake terrors.

Emma, who I hope outgrows her close eyes. It affects her sight.

They need $2,000 more to get out of here and buy a house. Since Dagmar is the mail lady and David the repair man it may take a little while.
"I dream of a better tomorrow, where chickens can cross the road and not be questioned about their motives." - Unknown
~Call me Jo~
Careers and businesses for sims
What I Love About Toddlers
Mew1210

I wish I had a better picture of them, but... here are Orion, Apollo, and Mercury Curious. They're Pascal's adorable alien triplets. :D
|| Tumblr ||
Hazl

Being taught to walk by her mom Shelby.

Oscar Beare being held by mom Jenny right after he aged:

Oliver Beare, the twin of Oscar being held by sister Chloe righter after he aged:

I have a simblr now! Check it out: simblr
Had a long day and need a laugh? Check this out for funny sims stuff!
ohgreatone22

No one's posted any baby/toddler pic in a while, so I'm gonna post some: She looks so happy to be a mother again, doesn't she?

Rachel Roseland gave birth to a boy, named Sebastian, and he has his grandmother Tara's red hair: Lyric Landgraab gave birth to a girl, named Madeline. Her and her husband, Malcolm V wanted a boy, but it's okay, they can keep trying for that boy. I have a simblr now! Check it out: simblr
Had a long day and need a laugh? Check this out for funny sims stuff!
Freefalldreams
Scholar
#47 This was just before Sirius Curious grew up. I expected a normal alien-featured toddler... ...and I got this! What are the odds of the first Curious baby looking this human in facial features? It's almost creepy...at least his ears are a bit odd. He also grew up into very seasonal clothing, since it was Winter Day. I can imagine him thinking "This is the log of the starship Highchair, exploring the universe..."
roxmaniac

Blue, one of the first alien births since I changed PT pack.

The daughter of my abducted sim Darrin:

So much for the always dominant alien genes. Brown eyes, ha!
I had to use CAS to show her, because my old hood got corrupted and I could only rescue the character files. Her toddler pictures were scary. Those big eyes... they suck out your soul!!

But her... erm, father-mother? male mother? daddy mom? was so proud.
Training_Cookie

The newest toddlers in my neighborhood, triplets Maria, James and Mary: