It's up to contestants whether they decide to upload contest lots. I haven't because I used a lot of cc. If you see one you like during the contest ask them if they would like to upload afterwards.
Advertisement
Kukamuukaanmuka

Adding to what @yavannatw just said, in this contest when very little CC is allowed it might be a higher change for them to be uploaded, as cannot have tons of CC

(unless of course one uses a different cc window , door, stair or fence everytime they make one


Past the point of no return,
No going back now,
Our passionplay is now begun.
Past thought of right or wrong, final question, how long have we wait before we're one?
~Andrew Loyd Webber (Phantom Of The Opera)


If curious, my Widespot+LGU+Bigg City
kanzen

Question~! @gummilutt
are the apartments supposed to be fully furnished or just fitted with kitchen and bathroom?
Phantomknight

I want in on all the apartment mania! Sign me up please!

This should be fun!
"May the sunlight find you, thy days be long, thy winters kind, thy roots be strong." -Grand Oak Tree, DAO

Like you I hope a lot of them will end up uploaded kestrellyn, want all of the new shiny apartments for my game

I was sad so few of the lots from Wanderlust got uploaded, would have liked a lot of them for my BV hoods.

Signed you up Phantomknight

So yes, all apartment units must be fully furnished and ready to be used as is.
Retired creator.
Charmful

Hi Gummi, I'm considering this. I have a question about the bonus category of 'Each unit has unique furnishings'. Does this mean units cannot use the same counter tops, toilets, showers, etc (that usually are a part of the unit before move-in) or does it mean it can have basic coherency on those pre-move-in objects but maybe uses different sofas, beds, end tables and other personal items a sim would bring when they 'move in'?

Since round one you mentioned one unit should be geared toward a family - what would a reasonable rent be. You mentioned "Recommended rent: If it's for two Sims, 6000 and below." But 3 or 4 sims - can that be higher because of the amount of sims/items for these sims?
Uh oh! My social bar is low - that's why I posted today.
My SIMBLER | SIM WHIM | SIM VIDS | SIMS 2 STORIES | SIM PICTURE-TAKING TIPS | MY HOOD | SIMSTAGRAM | TWITTER | TWITCH
gummilutt

Same counters/toilets/shower is fine. Not that many options for bathroom-items, would be rather unreasonable to demand those be different

More options for counters, but if you want to use the same one that is okay. The idea is to encourage people to go the extra distance and make each unit feel like a different home, as you see a lot of identical units in uploaded apartments. For example, while it's hard to avoid using the same items for bathrooms, you can change the feel of them by changing the placement so that each bathroom is a little different in terms of layout. Or perhaps have a free-standing sink in one, but a counter with a sink in it in another. Same thing with kitchens, perhaps all units have the same color counters but odds are the people who live there would have different appliances. Maybe someone has a blender, whereas another only has a microwave and a third has nothing at all. Little details like that

As long as it's clear you've tried to give variety you will get the bonus. Judges may have different ideas of how things should be though, can't speak for how they'll judge these things in their deco-category

As for rent-question, since a family usually only has two breadwinners (or one!) being a family as opposed to a couple really doesn't change income, so 6000 is still the guideline. I've only ever managed to build one apartment with a rent that went over that (6005) and that one was two stories with a backyard and jampacked with the most expensive objects possible. So 6k should give you plenty of legroom

I have no idea what kind of visions you guys have though, and if you need to go over for some good reason then that's okay. Examples of good reasons would be "I wanted a unit for a family of 8 and even though I used cheaper items it's still over 6k", "I really wanted to build something with extravagant gorgeous back yards for the nature-loving Sims, and that added so many tiles it was impossible to keep rent under 6k" or "I wanted to build a luxury complex for the richest of rich Sims, and the landlord insists on high rents to scare off any sub-par Sims". As long as there's a clear thought-through reason for the high rent I'm on board

I added the explain-clause specifically so that reasonable deviations could still pass, and I choose to have size/rent as host bonus rather than part of judging-criteria specifically so that if you ignore it in a way that I don't understand it won't cost you that much either way. I figured 3 points total (size, rent and units being different) is low enough that you could ignore it and still have a chance at winning

Please note though that during round 2 rent is part of judging criteria as well, since in that round it's part of the requirements and therefore included in the requirement-category of scores.
Retired creator.
Charmful

Apartment Mania:
Play testing
A
Rent-controlled
Tower of a place that needs
Moar Space! Which costs
Even pricier rent!
No CC
Tough time for me, but
Sign me up
Uh oh! My social bar is low - that's why I posted today.
My SIMBLER | SIM WHIM | SIM VIDS | SIMS 2 STORIES | SIM PICTURE-TAKING TIPS | MY HOOD | SIMSTAGRAM | TWITTER | TWITCH
gummilutt

That is one very creative way to sign up Charmful, very fun! I've signed you up

I haven't entered a contest for quite some time, but this does sound fun! So, apartment mania, here I come! :-D
- My TS2 Victorian-Themed Pinterest Resource Boards -
Phantomknight

@gummilutt, Is the invisible driveway recolor allowed?
"May the sunlight find you, thy days be long, thy winters kind, thy roots be strong." -Grand Oak Tree, DAO

No, driveway recolors. I'd like to say yes because it does allow a lot more variation and creativity in the yard-department, but so does a lot of things and if I make one exception there's bound to be another and we'll end up with terribly complicated CC-rules

I was hoping to get some more variety for garages (as I personally hate when the driveway sticks out against the rest of the floor) and for the front of the lot. I get it, though.

Oh, well, back to making faces with my window layout then.
"May the sunlight find you, thy days be long, thy winters kind, thy roots be strong." -Grand Oak Tree, DAO

I'm a little nervous, but can I join in as a play-along? I love apartments, but this would be my first contest. Even the idea of being a contestant makes me nervous, but I'd definitely like to try this!

You don't have to upload your lots for the contest, just pictures of them.
AliaD85

Yeah I hear you Phantom, I'm not a big fan either but I think you guys will do great

And of course AliaD85, you are very welcome! I'll sign you up as a play-along

If you change your mind and would like to be a contestant just let me know.
Retired creator.
stitching
Forum Resident
#43

This week I've finally been able to play Sims 2 again, and I've started a new 'hood. It currently has no apartments, though I was planning on building at least two. I've got apartment mania, so this sounds like a great chance to finally join a building contest. Please sign me up!
rachael525

I love this contest idea! Please sign me up too.

Wip!!!
had some freetime today :3c
none of the bedrooms from different units share a wall! woohoo away my sims, woohoo away

it was one heck of a challenge to furnish without CC
oh ikea stuff pack~what will i do without you?

edit: I removed the japanese style bathroom and made 2 bathrooms instead. gotta remind myself that sims lack the discipline japanese people have =)))
2 bathrooms should stop them from cramming into each other. 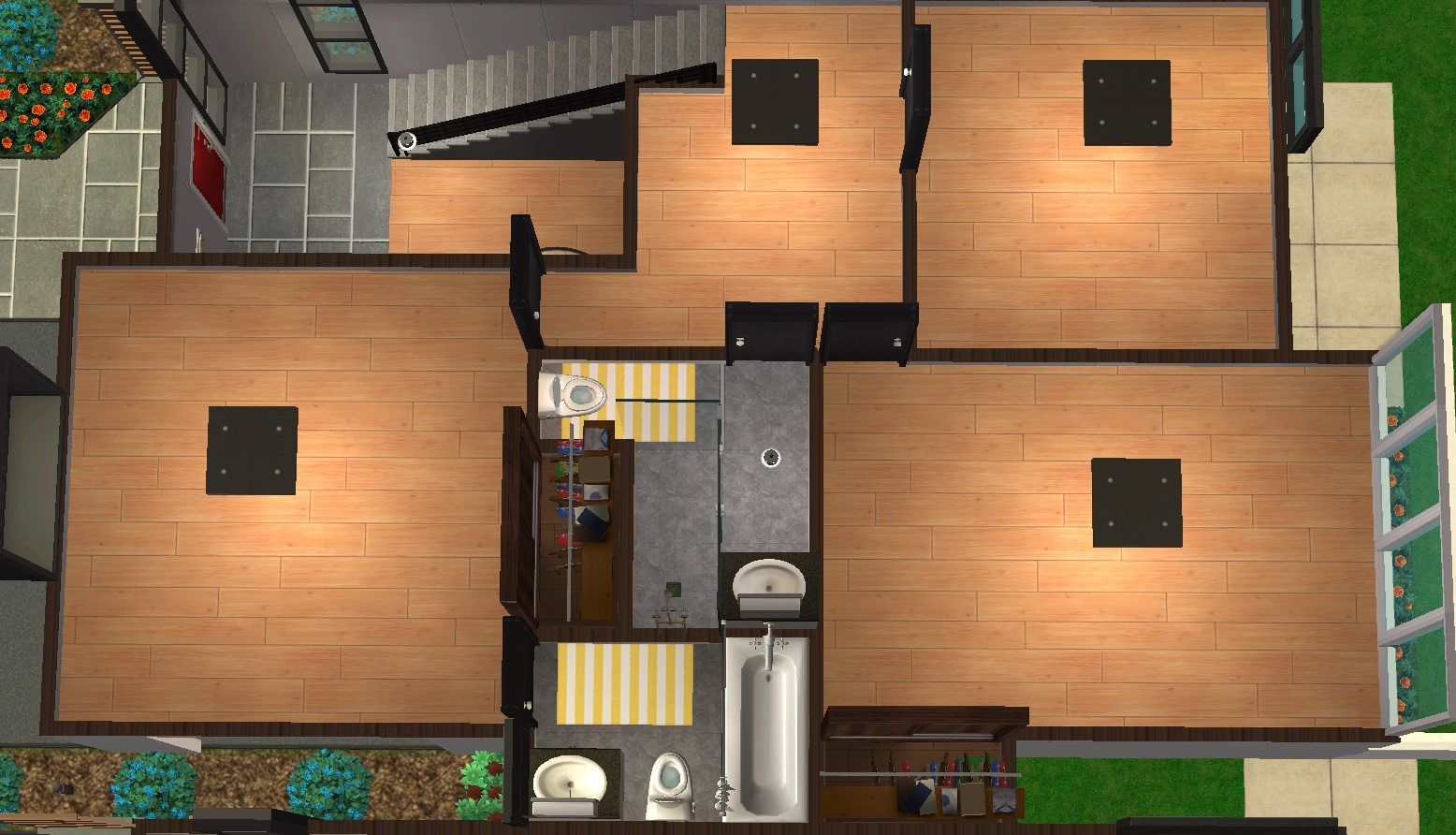 For build cc, are we limited to variations on Maxis items, such as the add-on sets, or can we use completely new styles of windows, doors, or fences? For stairs, are different ones like Marvine's ladders or modular rock steps allowed or should we stick to open underneath and mirrored versions of Maxis?
Phantomknight

"To apply you post that you are interested in participating, and make sure you include the words 'apartment mania' in your post."
"May the sunlight find you, thy days be long, thy winters kind, thy roots be strong." -Grand Oak Tree, DAO

You may use any window or stair you want, those were just examples

If it's in the listed category, it's allowed. If it's something strange that judges may not recognize as being from that category you might want to mention what it is in your post. Have signed you up

Quick question: would putting bushes or hedges behind 'fences' have points counted off because they aren't accessible in a vanilla play way? Because I have the mod which allows gardeners to ignore that so it wouldn't be a problem in my game of trimming shrubbery behind a 'fence'
Uh oh! My social bar is low - that's why I posted today.
My SIMBLER | SIM WHIM | SIM VIDS | SIMS 2 STORIES | SIM PICTURE-TAKING TIPS | MY HOOD | SIMSTAGRAM | TWITTER | TWITCH
Phantomknight

Charmful, I was thinking about the same thing! Normally when I put a lot of bushes on a lot like this, I use plastic hedges and limit the amount of gardening for the landlord, but that's cc, so I can't use it for this. My guess is that the mod won't be either and we'll have to get creative.
"May the sunlight find you, thy days be long, thy winters kind, thy roots be strong." -Grand Oak Tree, DAO