The Mysterious Mr. Gnome looks similar to a regular gnome, only with a star on his hat, and no base. While he may appear to just be a simple statue, he's capable of things no statue can do! 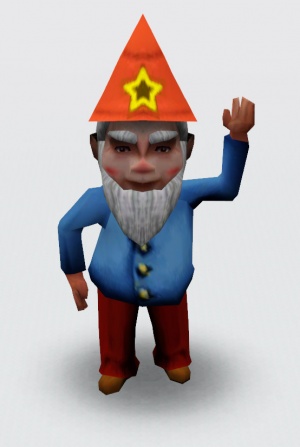 The Gnome can be found in several ways:

You may have a higher chance of getting a gnome from sending in gems or ores for cutting or smelting if you have a sim who's done a lot of collecting send the items in.

Once you have a gnome in your inventory, place him where ever you want him on your home lot... but don't be surprised if he's not there when you look again! Kick the gnome and pick him up again to get different poses. You can also give your Gnome a name.

The Gnome changes poses, uses objects, cleans objects, and just plain moves around the lot when you aren't watching! His hours of trickery are between 21:00-4:00 (9 PM to 4 AM); the chance of performing any of these options is between 10% and 80%. He may develop a preference for specific objects, especially expensive ones (over 1500 simoleons).

Your Gnome may seem to go dormant for a while - they don't move or do something every night, and as the chances of them doing something are random, you may have to wait a while for your Gnome to move.