Toddlerhood is the second stage of a Sim's life, and is an important one for the Sim's future development. There are several factors to how the well the toddler will grow up, such as being taught how to walk and talk.

For an explanation of how long the toddler stage will last (which depends on one's in-game settings), see Aging. 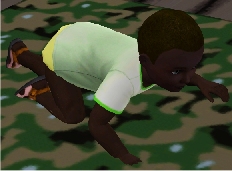 Toddlers do not have any wishes, and only have two traits, which he or she was granted at birth. Toddlers have the same needs as adult Sims; however, they do not receive the full range of moodlets. Toddlers do not, for example, get a bad moodlet from being around something stinky.

Toddlers can also read some children's books all by themselves.

Toddlers can not learn the normal skills that older Sims have, like creativity, cooking, etc. However, they can learn "hidden" skills which predispose them towards a particular skill when they grow up, and will activate later in life, often starting them off in a skill with several skill points. These hidden skills can be gained through the various toddler toys, such as the pegs (logic) or the xylophone (guitar) to a maximum level of 3. Additionally, by reading or being read child development books from the bookstore, they can also "pre-learn" certain other skills.

Just as in the Sims 2, your toddlers need to be taught to walk and talk, and be potty trained, by their parents or older siblings. Teenagers, young adults, adults, and elders can perform these tasks. To teach a toddler to talk or walk, click on him or her; to potty train a toddler, click the potty.

These functions are pretty intuitive, and work much the same as in the Sims 2. One notable difference, however, is that toddlers will now potty train even if they don't need to go, or if their other motives are very low.

Parents will usually get wishes to teach their toddlers these skills, and if you manage to teach them all three before they grow up, they'll likely have a good toddlerhood - which has benefits later on.

Warning! There is a bug in teaching toddlers to talk which may cause the parent to get stuck once the toddler fills up his or her skill bar. To unstick your sim, hit Ctrl-Shift-C to bring up the cheatbox, and type in resetsim ParentName - so if your stuck parent is called John Smith, you'll type in resetsim John Smith. This should unstick the parent. 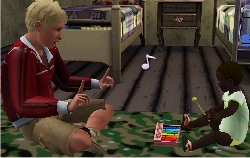 Toddler interactions are fairly limited. They can play with toys, and ask an adult who is carrying them to put them down; and use the potty if they're trained - but that's pretty much it. Other sims have some more options, such as tickling; however, children and other toddlers can not interact with toddlers - except in some special situations like sharing toys.

Toddlers can be read to by children, teens, young adults, adults and elders.

Once your toddler has been a toddler for long enough that you're starting to get bloody sick of having to feed and change him or her all the time (pro-tip: this is about three years less time in your case than most mothers manage), you'll want to grow him or her up into a child. You can do this by waiting for the kid's birthday to come around, or by buying an early birthday cake to trigger a pre-emptive birthday.

When your toddler grows up, several things will happen: the child will start getting wishes, attending school, and will gain a third trait. If your toddler had a good toddlerhood, been looked after and learned to talk, walk, and poop in the right place, then you will likely get to choose this trait. If not, the trait will be chosen for you - anything from a relatively neutral one like Heavy Sleeper, to one which could by some be considered a slight disadvantage, such as Insane, or Loser. If you want to avoid your poor simmie growing up as a bundle of wasted potential, make sure they learn the basics!