This article is written for The Sims 4. For the equivalent Sims 3 article, click here.

TS4 relies very heavily on the CPU and having a multi-core processor makes a huge difference in performance, but that does not mean just any graphics card out there will work. What it DOES mean, is that if you have a really strong quad, hexa, or octa core CPU, you may be able to get better performance. If you have an older or slow CPU (Penitum 4/D/Core 2 Duo, Athlons, ULVs), performance will be bottlenecked by the CPU and it reduces performance (If task manager detects 90-100% CPU usage while playing TS4).

The Sims 4 introduced a first-person view since Patch 1.47.49 but does not support VR (Virtual Reality) gameplay. Playing The Sims 4 in 4K resolution or higher is very demanding and requires the most powerful and latest graphics card to run fluently (60+ FPS).

To make this simple: If your computer can handle TS3, then you can play TS4! (TS4 is slightly less demanding than TS3 due to a non-open world) However, the game gets more demanding with each patch or EPs/GPs installed.

These CPUs will reduce TS4 performance:

Laptop users click here to find out if your laptop graphics can run TS4 and see this article about playing the game on a laptop.

Mac Users: Scroll down to the bottom of the article for compatibility chart.

Check your graphics card or you can benchmark your own graphics card by installing 3DMark. (Graphics card chart on the UL website now shows 3DMark Time Spy scores used for DX12 benchmarking. However, TS4 is not programmed with DX12. You may want to search benchmark scores for your card here. Make sure it is set to "Fire Strike" and not "Time Spy" when searching to show 3DMark Fire Strike scores.)

Disclaimer: 3DMark Fire Strike is a synthetic benchmark that has no relation to any game so the benchmark may or may not represent performance when running TS4. TS4 does not have its own benchmarking mode. Although the benchmark charts are more accurate than the graphics card chart which can be subjective, it is not perfectly correlated. UL assumes no responsibility to the user when using these benchmarks as an indicator for potential game performance. Other computer components (CPU, memory, and storage) also influences performance. It is recommended to download TS4 CAS demo for free before purchasing the game to see if the game can run on your system.

The chart above is based on the chart from Notebook Check with a slight increase taken into account the latest patches and to provide some headroom for any EPs and GPs. (Note that Notebook Check benchmark TS4 on the latest patch when first system with the graphics card is released and tested and NOT the current patch.

Below are two charts that related the 3DMark Fire Strike Score and TS4 FPS. 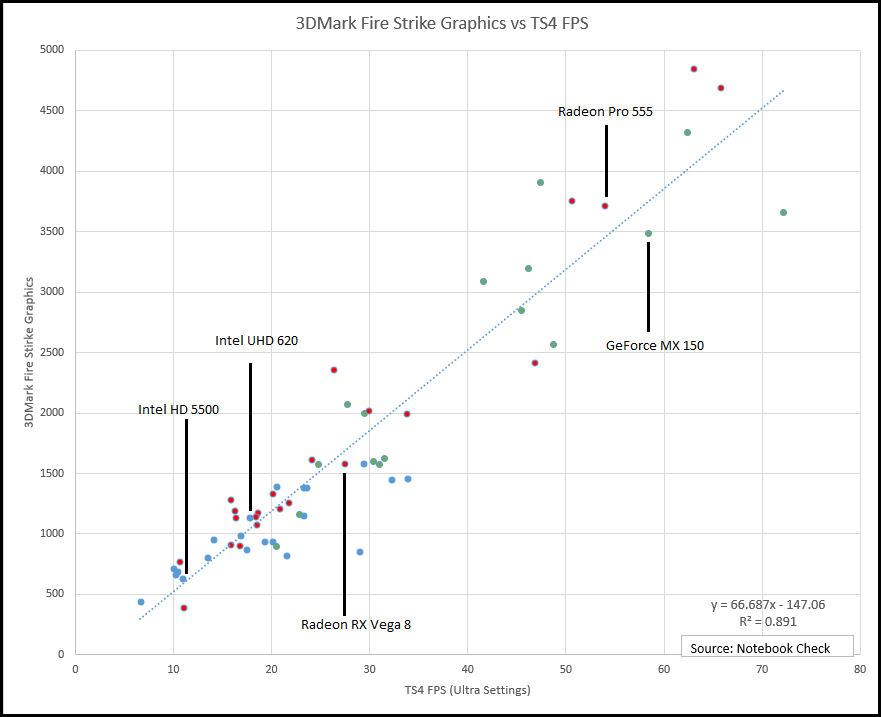 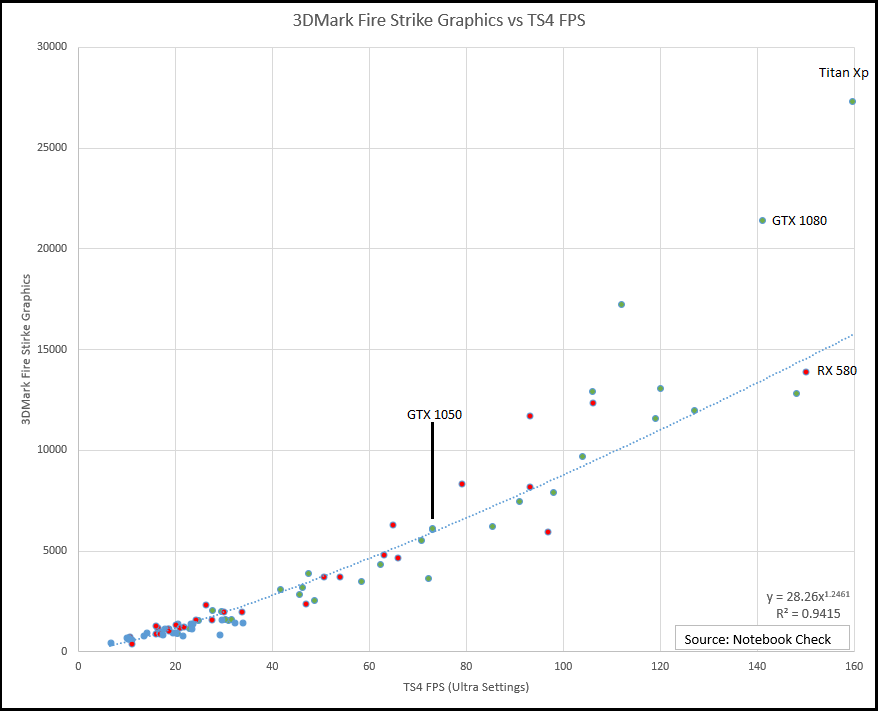 A note on these requirements: The requirements listed below are taken directly from the official TS4 Site. These are the absolute bare minimums you need to get the game up and running. These are NOT the minimum requirements for a playable game experience! If you have just the bare minimum and a low-end graphics card, you will NOT be able to play the game! It will run... but it will not look good, run well, or run consistently without crashing.

In order to find the specs on your system, see: Game Help:System Specs. If you are looking to upgrade your system, please see Help: Computer & Software Help for lots of advice, recommendations, and a place you can ask questions on specific hardware.

Items marked in green are those which are also recommended by MTS for playing The Sims 4.

Standalone cards that are installed in legacy PCI slots (not PCIe or PCIx), such as some GeForce GT 610 variants, will perform poorly. Most AGP graphics cards, if not all, won't work at all. (performance would be bottlenecked by the CPU anyway as motherboards with AGP slots were introduced in the 1990s/early 2000s.)

Regardless of the performance potential of these cards all NVIDIA Quadro and AMD Firepro/Radeon Pro workstation graphics cards are unsupported in TS4 and TS3 as they are not made for gaming. Non x86-64 based systems, such as ARM-based Windows systems (Qualcomm Snapdragon CPUs), will have poor performance when running TS4 and TS3.

Intel's legacy GMA (Non-HD) integrated chipsets featuring underclocked parts will not perform adequately. Intel's Celeron n-series, Pentium n-series and Intel Core M graphic processors are ultra low wattage that also feature underclocked graphics processors. Integrated chipsets such as the ATI Xpress and the NVIDIA TurboCache variants may default to settings that are higher than what would be optimal for them. Graphics settings can be lowered to improve performance.

Please note that attempting to play the game using video hardware that isn't listed above may result in reduced performance, graphical issues or cause the game to not run at all.

Below is the MINIMUM System Requirements for Macs. These specifications are equivalent to a 2010 model MacBook Pro. However, the 2010 Mac models are obsolete by Apple and will perform poorly when playing TS4.

To find what Mac model and its release date you have, click on the Apple logo on the top-left corner > About This Mac.