Here are four examples of a game version and their breakdowns: 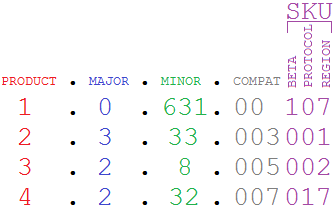 The game version, as a whole, identifies a very specific release. In the example above, they are:

Every game, expansion, and stuff pack has a unique product identifier:

The major and minor version numbers really do not mean a whole lot on their own except that the higher the numbers, the more recent the patch with the major number taking precedent. For example: 1.0.631 is older than 1.15.34 because 15 is greater than 0. The major number often changes with every patch released whereas the minor number changes whenever they test a new build internally (usually does not reach the public).

See table below for details.

The SKU is broken into three components, each corrosponding to a digit. From left to right, they are Beta, Protocol, and Region.

A boolean value of 0 or 1 where 1 indicates it is part of beta testing for the patching protocol. This was only seen once on region 7 when the game was originally released.

This is likely an EA Download Manager/Origin version number which the application can check to make sure it is capable of handling the patch. There's only been three values given:

For a full list of languages included for each region, see Sims 3:Regions.

Base Game Version Required to Install EPs and SPs

Here are tables with all version numbers, associated manifests, and to what products they belong.

Includes the base game, expansion packs, and stuff packs. Italicized data points are chronologically out of order.

Note: In order for the tools not to complain about version numbers, you must have your game fully patched to the correct compatibility number. The tools will refuse to run if you do not.