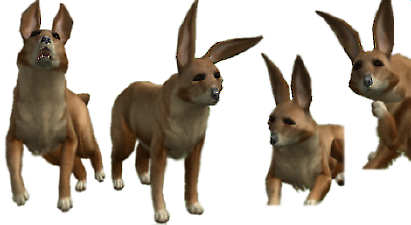 I've created a jack rabbit out of a small dog, which my first creation. Nothing super special, but I thought it was cute ^.^

This is a Sims2Pack file.

In game, so you can get the idea of his size:

The other dog in the 3rd picture is the Boston Terrier from SimSpore's Six Pack.

And I must admit it is a bit odd to have a barking rabbit -- But I think his cuteness should make up for that.

I used HystericalParoxysm's "Default Replacement Pack - Pet Eyes That Don't Suck!". You do not have to have these to make the pet work, but you will just get Maxis eyes instead of HP's. If you think you like them, go ahead and grab them.

So, anyway, enjoy the little guy!

-Policy-
- Modifications/re-uploads are okay as long as you credit or link back, AND they stay on MTS. That excludes the Exchange, paysites, and everything else that isn't MTS. I hope that's clear. And I don't mind if you use anything in a picture/story/movie. :3
- And be nice to him, no animal abuse!

Additional Credits:
CatOfEvilGenius for the CAS Greenscreen, which helped dramatically to make the first set of screenshots.

Modifications/re-uploads (on MTS only) with links to original download are okay.