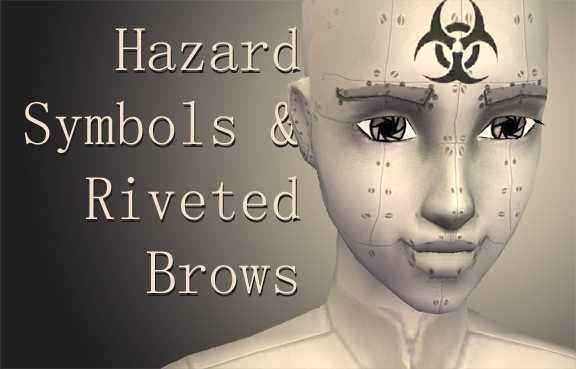 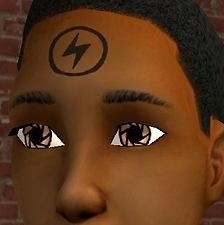 Created by mhaze
View all Downloads
Uploaded: 28th Jan 2009 at 6:48 PM
Updated: 26th Mar 2009 at 7:28 PM
Hello everyone! I was so thrilled people liked my last upload that I decided to upload some more stuff. This time I included a set of hazard symbols as costume makeup, as well as some other stuff that goes along with my last post.

What's Attached...
There are several files on this post. One contains the seven hazard symbols. (See the picture below.) They are really dark grey and slightly transparent, and can be used on any skintone. At one point the silver riveted brows were here, but I moved them after the crash to be with their friends here.

The last contains a different color of the silver riveted skintone - a bronze version. It's identical to the Silver Riveted Skintone that was my first upload, but it's been batch recolored to a sort-of bronze tone. (Again, completely, 100% barbie.) It's not a great recolor, but I'm uploading it anyway. I hope to make a better version of both silver and bronze colors to upload at a later date, but they took so long it may be a while. The package contains bronze eyes and brows in addition to the skintone.

Who It's For...
The hazard signs are for all ages that can have costume makeup. I had to distort them slightly to get them to look right in the game. Some are a bit distorted on certain ages and will be a bit distorted if you change your sim's brow a lot. It's not very bad, though. The bronze set is also for all ages. (Click here to see the silver version that this is a recolor of.)

What you need...
You shouldn't need any expansion packs. I have seasons and pets, but I can't think of why it wouldn't work with just the base game. I based it off of the 'Mime' costume makeup. If you have problems, please let me know!

Use...
I'd be totally complimented if anyone would like to use it! Just please no pay sites and respect MTS2 site rules, please.

Thanks...
Thanks to Photoshop, Gimp, Bodyshop, and my little old Mac. Thanks to a program called 'Timed Screenshot' from Christian Schmitz/Monkeybread Software for a freeware screenshot program I used on my Mac without running the game in a window. Also thank you to everyone who downloaded and/or thanked my first skintone, and, of course, MTS2!