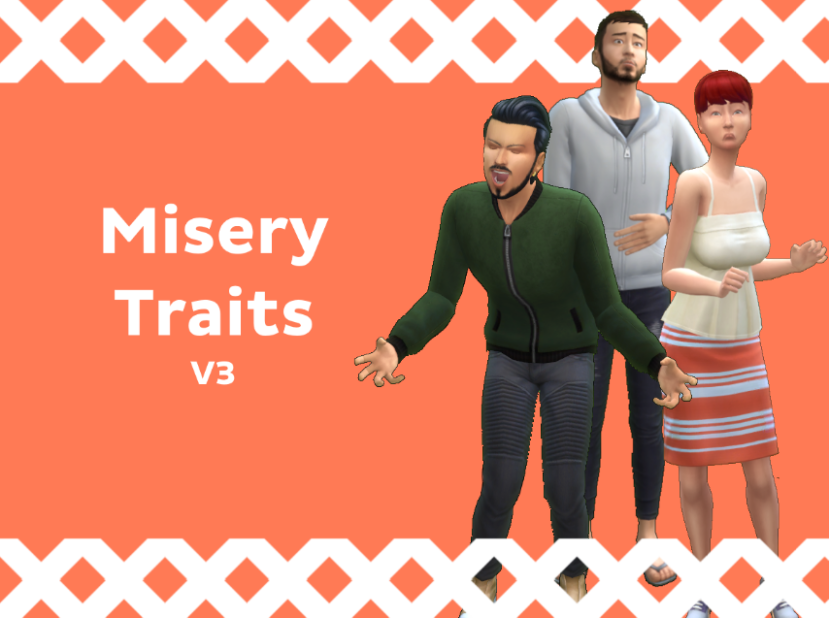 Created by NateTheL0ser
View all Downloads
Uploaded: 11th Jun 2019 at 6:36 PM
Updated: 28th Jun 2022 at 1:30 AM - Werewolves Themed Updates to Two Traits
UPDATE: Temperature based trait updates for MWS have been slightly postponed due to some "modder's block" on what to do with them, however, two traits have been updated to support werewolves: Vampire Hater (to make the Supernatural Beef go even further between the two) and Allergic To Dogs (because they're, well, wolves). Aliens will soon be getting a similar self hatred buff like Vampires do in this latest update as well.

Supported Overlay: Please consider using this overlay pack here which comes with some tweaked overlay defaults + a face overlay for some of the traits featured here, OR, you can use the separate allergy overlay now included in the folder. Both overlays are a blush by WeepingSimmer , with much thanks to their TOU allowing makeup edits with credit.

This mod used to live on my tumblr (here ) but now MTS will be considered its home.

All traits are in separate packages within one zip, so if there is a trait you don't want, you can delete its package.

Here's what each trait does:

Alien Hater: “Alien Haters despise aliens and are disgusted by their very existence”
Type: Personality, Social
Features: Angry proximity buffs from both aliens (+2) and sims involved in alien pregnancy (+4)! Alien Haters can also complain about aliens, making non alien hating sims Embarrassed (+3) and fellow alien hating sims Happy (+5, because it's hard to find someone else sharing the haterade :p), each for 4 hours. Alien Haters can also hurl Anti Alien Insults and make Aliens tense (+5) from their hateful words. They can also insult alien genes when they feel angry about a nearby alien pregnancy. Alien Haters now give a +4 tense buff to nearby aliens. Alien Haters will receive a +2 Angry buff when witnessing an alien getting married.
Requirements: Get To Work (because aliens)
Gameplay Trait add/remove interaction location: Actions pie menu


Hay Fever: “Sims with hay fever suffer throughout the Spring months”
Type: Personality, Lifestyle
Features: Uncomfortable (+3) buff during Spring, causes coughing and sneezing. Flower Arranging Skill gain is decreased (hard to learn when you’re sneezing all the time!). Buff comes with overlay support. New buffs experienced when a sim is affected by an arrangement buff or carrying flowers in their inventory. Now sims can complain about the pollen count. They will be appropriately affected by wedding bouquets with a new +2 uncomfortable buff when carrying them.
Requirements: Seasons, Get To Work for the idle animations
Gameplay Trait add/remove interaction location: Health Profile pie menu


Allergic to Cats/Allergic to Dogs: “Sims allergic to [cats/dogs] have a hard time being near [cats/dogs] without sneezing!”
Type: Personality, Lifestyle
Features: Uncomfortable (+3) buff around [cats/dogs], causes coughing and sneezing. Uncomfortable (+2) buff on vet and [cat/dog] friendly lots. Buffs now come with overlay support. **NEW** Sims allergic to dogs now get a special +2 Uncomfortable buff around Werewolves in Wereform, and Vampires with this trait will get an extra +2 Angry buff when experiencing symptoms from Werewolf proximity.
Requirements: Cats & Dogs, Get To Work for the idle animations
Gameplay Trait add/remove interaction location: Health Profile pie menu


Hates Heat: “Sims who hate heat do not enjoy warm weather! Air Conditioning only lasts so long, these sims just really hate the heat!”
Type: Personality, Lifestyle
Features: Occasional Uncomfortable (+4) buff when it is hot; it goes away as long as they have the “refreshing air conditioning buff” but as soon as that wears off, there’s no fooling them: these sims know when it’s just too hot! When this buff is active, they will play “melting” animations. Sims are drama queens!
Requirements: Seasons
Gameplay Trait add/remove interaction location: Actions pie menu

Can’t Stand Cold: “Sims who can’t stand cold dislike cold weather. Heating only lasts so long, they just really can’t stand the cold!”
Type: Personality, Lifestyle
Features: Occasional Uncomfortable (+4) buff when it is cold; it goes away as long as they have the “central heating” buff but as soon as that wears off, there’s no fooling them: these sims know when it’s just too cold! When this buff is active, they will play “freezing” animations. Sims are drama queens!
Requirements: Seasons
Gameplay Trait add/remove interaction location: Actions pie menu


Allergic To Magic: "Sims who are allergic to magic sneeze whenever their immune systems sense magical presence."
Type: Personality, Lifestyle
Features: Uncomfortable (+2 to +4) buffs when in the presence of spellcasters, familiars, and Magic HQ. They also will not be pleased should you ever make them a spellcaster. (To be honest I don't know why I made this trait, but have fun) Buffs come with overlay support.
Requirements: Realm of Magic, Get to Work for idle animations, patience with the goofiness of this trait.
Gameplay Trait add/remove interaction location: Health Profile pie menu

Hates Vampires: “Sims who hate vampires will feel angry in their presence.”
Type: Personality, Social
Features: Angry proximity buff from Vampires (+2) and an extra Sad (+3) proximity buff if a family member is a vampire. Sims who hate vampires can complain about vampires, giving a Happy (+2) buff to fellow vampire haters, a Sad (+2) or Angry (+2) buff to vampires, or a Sad (+1) buff to non-vampires who have some empathy in their hearts. Vampire Haters can also insult a vampire's vampirism, giving themselves a Happy (+3) buff and their target a Sad (+4) or Angry (+3) buff in response. They will experience a +2 Angry buff when witnessing a vampire sim getting married. **NEW** Vampire Haters who happen to be Vampires themselves will experience a +3 always-on Sad buff, because they hate themselves (this is so sad I cry every time). Vampire Haters who are Werewolves get an extra +2 Angry buff around Vampires.
Requirements: Vampires, naturally
Gameplay Trait add/remove interaction location: Actions pie menu

~~
Compatibility
The Hay Fever trait adds broadcasters to the flowerArrangement_WiltEffect_Normal and flowerArrangement_WiltEffect_Pristine object states of floral arrangements because objects don't take kindly to proximity buffs. These object states, unmodified, do absolutely nothing (like for real, they're just there), so there shouldn't be any conflicting mods overriding them.


Notes
I heard loud and clear about moodlet balancing from the Chat Pack responses. Unfortunately, the nature of these current traits I don't feel like they call for smaller moodlets (since they're meant to add some misery for your sims), but for future traits I would love to consider some traits that would go well with moodlets that have less weight.