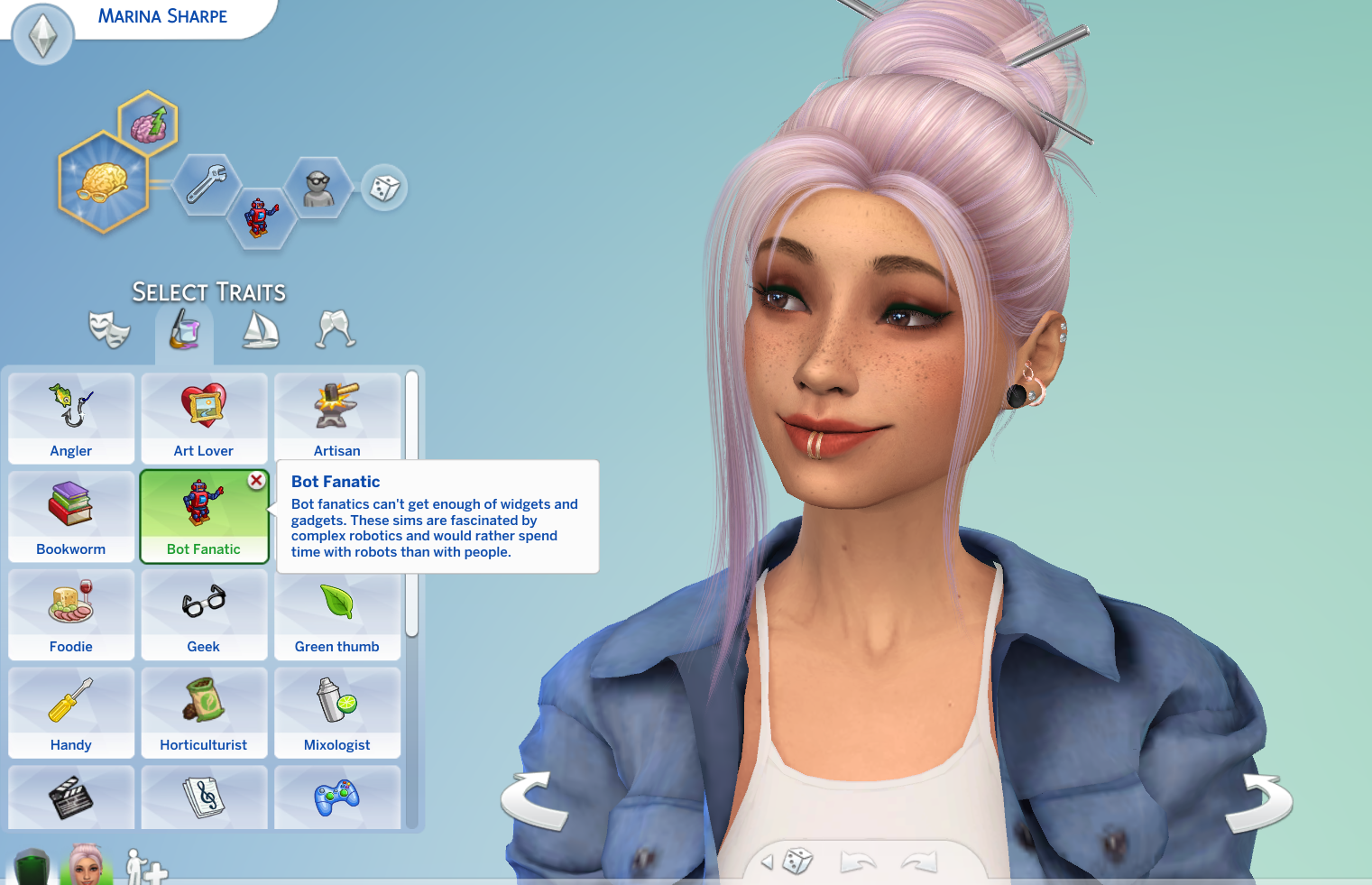 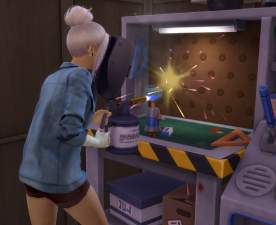 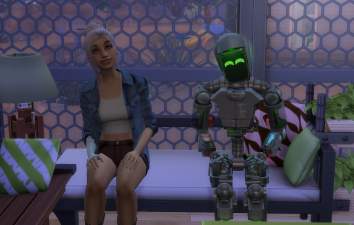 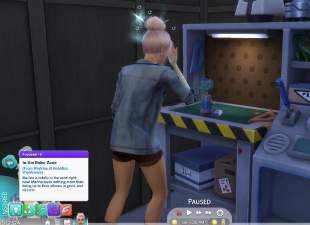 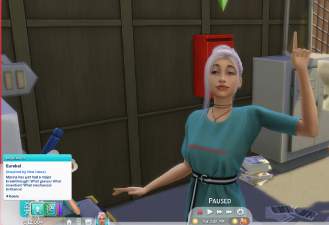 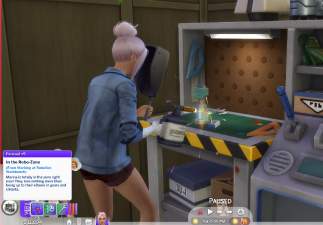 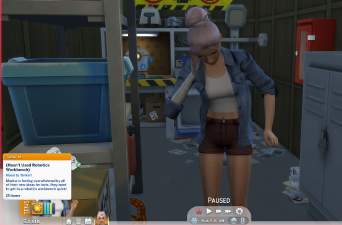 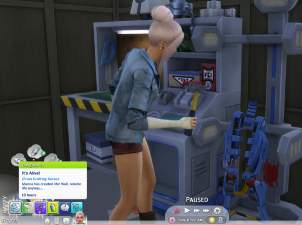 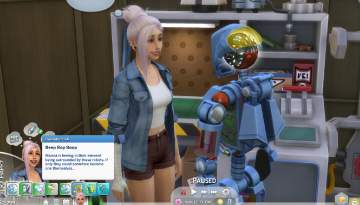 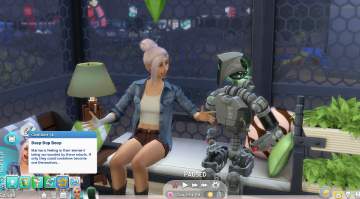 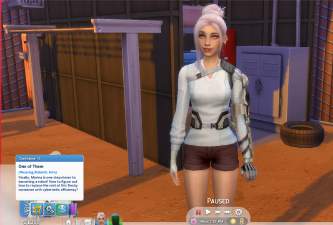 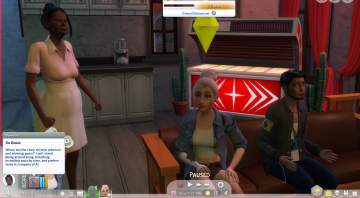 177 Thanks  Thanks     39 Favourited
Bot Fanatic Trait: Bot fanatics can't get enough of widgets and gadgets. These sims are fascinated by complex robotics and would rather spend time with robots than with people. This trait is located in the Hobby category.

This trait was made with Zerbu's Mod Constructor program and I am eternally grateful to them!

Why?
I was inspired by the Sims 3 Bot Fan trait and wanted to see if I could make something similar for the Sims 4. Robotics was always a bit boring for me, and my hope was that this trait would make things more interesting.

A Quick Note:
Oh boy was this trait harder than I anticipated! It took a lot of code digging to find the tuning ID's I needed and then there were challenges with the types of buffs. For that reason I've tested this trait pretty thoroughly. That said, I'm still REALLY new to creating traits so please let me know if you run into any challenges.

Compatibility:
As you may have guessed, this trait requires the Discover University expansion pack. All buffs and modifiers are focused around the robotics skill, the engineer career, and the robotics workbench. You should NOT need any other stuff packs, game packs, or expansion packs. That said, I do have all of the expansions and stuff packs in my game, so when I tested this trait it was with all of the packs included.

What does it do?
This trait uses the genius autonomous actions and combines that with a series of buffs connected to the robotics skill and servos. Bot fanatic sims will have increased robotics skill gain, increased progress in the engineer career, and slightly slower friendship relationship gain when not around servos.
This trait is restricted to teens through elders, as children can't use the robotics workbench without Zulf's Talented Kids mods https://modthesims.info/d/635907/ta...s-sim-mods.html (which I highly recommend!)

Buffs:
1. Beep Bop Boop: {0.SimFirstName} is feeling in their element being surrounded by these robots. If only they could somehow become one themselves... Sims receive this buff when around servos for a +4 Confident buff and increased friendship gain.

3. Give My Creation Life!: {0.SimFirstName} is creating life! Well, robotic life anyway... Sims receive this +2 Inspired buff when crafting servos (I realize the screenshot shows energized, but I switched it to inspired after taking this picture

4. Need to Tinker!: {0.SimFirstName} is feeling overwhelmed by all of their new ideas for bots, they need to get to a robotics workbench quick! Sims will receive this +4 Stressed buff if they have gone too long without crafting at the robotics workbench, and will lose it upon using the workbench.

5. One of them: Finally, {0.SimFirstName} is one step closer to becoming a robot! Now to figure out how to replace the rest of this fleshy nonsense with cybernetic efficiency! Sims will get this +2 Confident boost when they have any of the robotic arms equipped.

6. Eureka!: {0.SimFirstName} has just had a major breakthrough! What genius! What invention! What mechanical brilliance! Sims will have a random chance of gaining this +3 Inspired buff.

7. So Basic: Where are the shiny chrome exteriors and whirring gears? {0.SimFirstName} can't stand being around living, breathing, incredibly squishy sims, and prefers to be in the company of AI. Sims will get this +3 bored buff when around other sims, and will see slower relationship gain with regular sims.

Thanks to Eggyslav for the idea and most of the phrasing for this buff! Such a great idea! 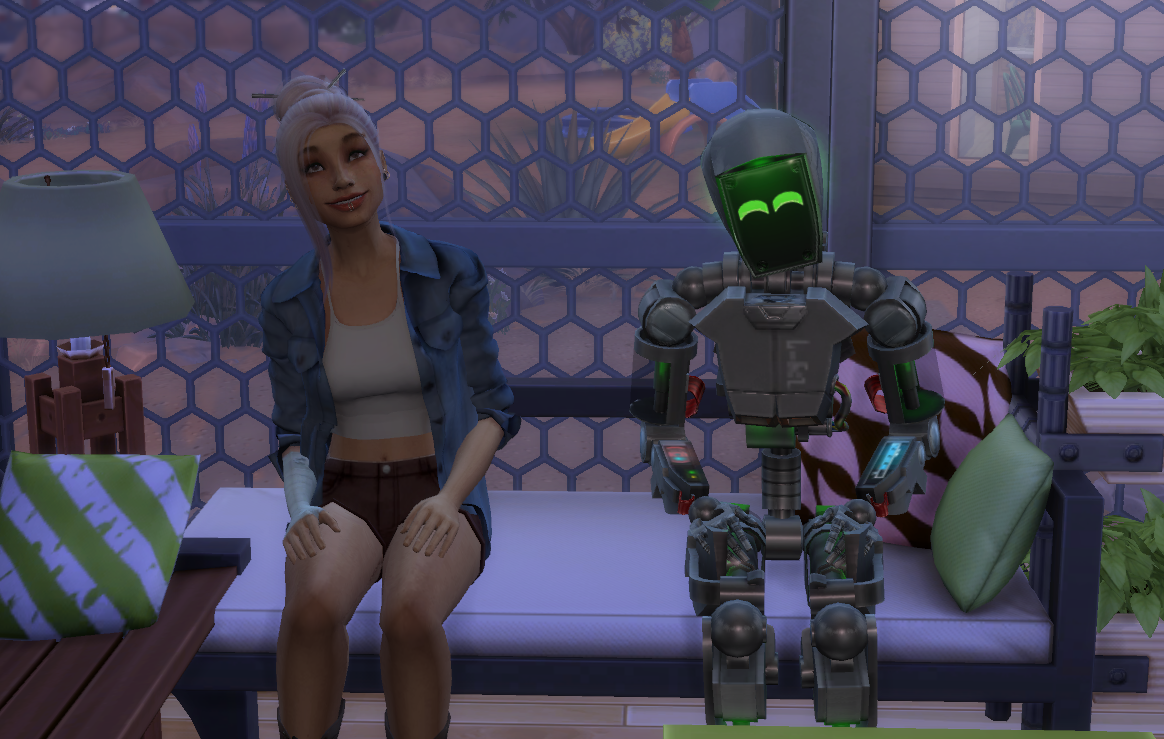 Additional Credits:
Again, this trait would not be possible without Zerbu's Mod Constructor Program: https://zerbu.tumblr.com/post/18178...-constructor-v4