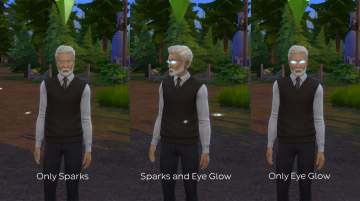 Created by Onebeld View Policy / About Me View all Downloads  Patreon

Upgrade to v1.1.3: Fixed a conflict for a lot of mods that use the injector

Upgrade to v1.1.2:Hello everyone! I've wanted to make this mod for a long time. The action "Bring the Lightning", unfortunately, is tied only to the buff. This mod fixes the problem. Made it in about three days. I even had to draw an icon for this mod, and, surprisingly, fits well into the style of the game (my opinion).

What does the mod do?
This mod adds a new trait - "Heavily Charged". With this trait, you can shoot lightning at any distance and enable various effects (sparks and glow of the eyes).

Installation
Place the script and mod in the Mods folder. Simple, right?

How do I get it?
This trait is intended to expand the gameplay, get an incentive to get this trait. It is not sold in the Reward Shop. You have to try hard to get this trait. So, you need to get one of these traits first - Storm Chaser or Erratic. This is required to unlock the Hypercharged buff. Then strike the Sim with lightning three times. Why exactly three?

1. The first time you get a charged buff;
2. Second time you get the Hypercharged buff, but don't get this trait;
3. The third time, if the action of the necessary buff does not end, this trait will open to you.

Functions:
In future versions, most likely, the possibilities will be expanded.

1. The ability to shoot lightning at an unlimited distance. This new action comes with this trait. The old remains the old.
2. Shoot lightning bolts at sims and objects
﻿

WARNING: This interaction is too powerful. It allows you to kill your Sims. Use it at your own risk!
3. Change the display of effects from a trait: 4. The most important thing is to feel like Zeus!


Conflicts:
This mod has no conflicts

Thanks:
JetBrains PyCharm Professional 2021.1 for creating and debugging the script part
Sims 4 Studio for creating the mod

You are so charged that now your energy will remain forever!
Ages: