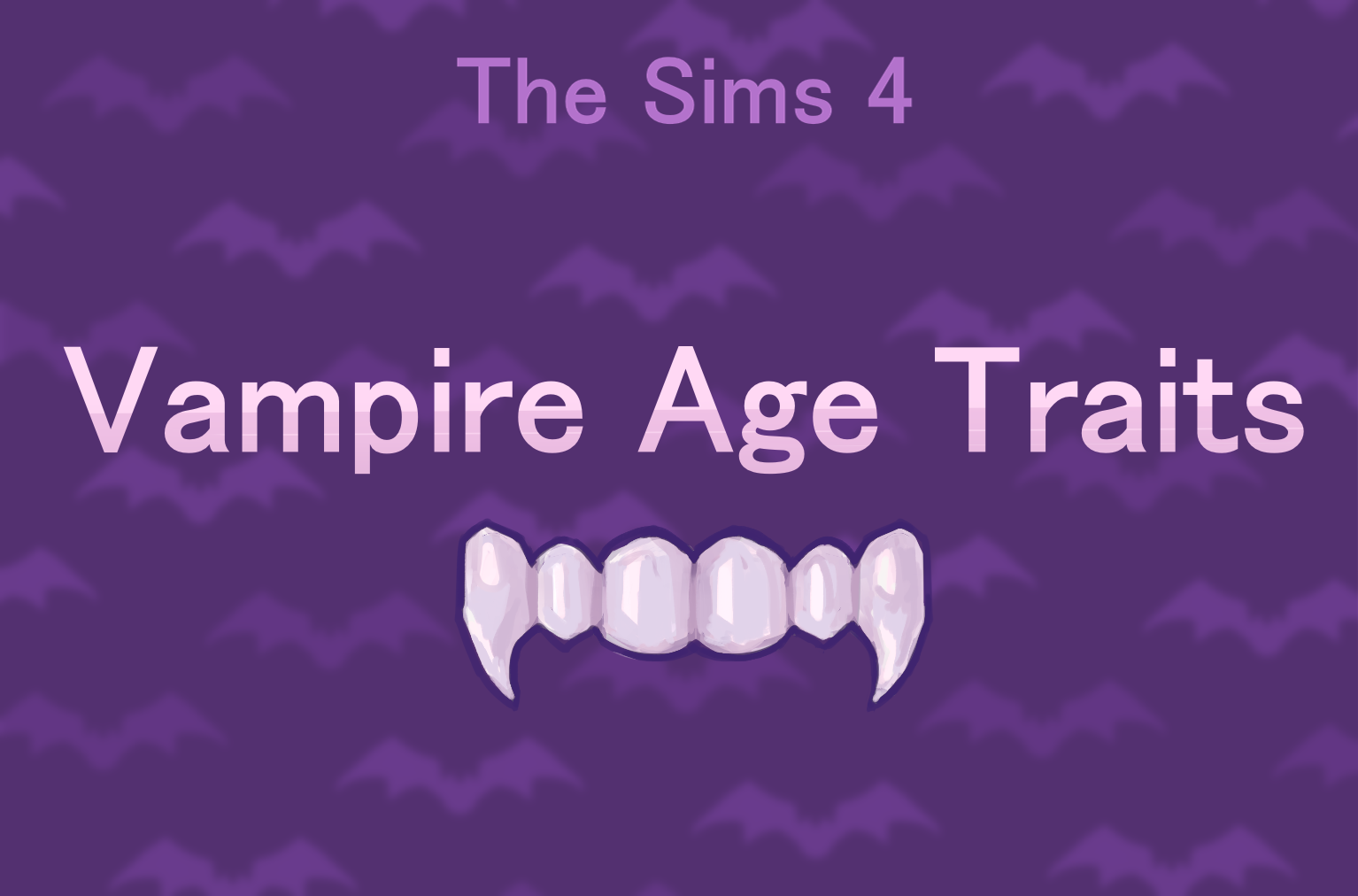 5,482 Downloads 66 Thanks  Thanks 38 Favourited 16,329 Views
Created by Odduck
View all Downloads
Uploaded: 8th Jul 2022 at 4:04 PM
Updated: 18th Oct 2022 at 1:50 AM
Update 17/10/22: updated the files to include new "Vampire Age Traits Cheats" menu (can be found in self-interactions under "Vampire" menu); now it's possible to switch to any vampire age trait at any time. Please, note: if you switch between the traits while a vampire already has any of them, the trait will change instantly, but it might take a bit for the corresponding moodlets to disappear (although reloading the lot or the save should remove them); this is normal, it's not a bug. Other than that, please, feel free to let me know if there are any issues with the new feature!
Updated the Russian translation. Добавлен перевод для нового меню.

Update 13/10/22: added a new optional archive "Assign Your Sire", which allows to assign and remove Sire status for any existing vampire (can be found in social interactions menu under "Vampire" > "Sire Menu"; works pretty much as any other social interaction, so it has a bit of animation). Please, note: for now it allows to simultaneously have multiple Sires, so the previous/existing ones will have to be removed manually.

Update 12/10/22: duels/sparrings update (thank you, Akifami, for the idea!): Neonates shouldn't be able to win against Elders, and it's very unlikely for them to win against Ancillae; Ancillae are very unlickely to win against Elders (but the chance are a bit higher than they are for Neonates and Ancillae). From my testing, it still works as intended even if both vampires have the perk to enhance their strength, but, please, don't hesitate to let me know if you find any issues! The update is more of a workaround rather than tweak of the actual interactions/outcomes, so it shoudn't conflict with anything.
Another small update: if a Neonate is near their Sire-friend, they gain their vampiric experience faster (x1.4 multiplier) now.

Update 11/10/22: for anyone unsure, this mod wasn't affected by any patches and, due to the nature of the mod, it is very unlikely that it will be, so normally it doesn't require updating (unless I add a new feature)!

Update 11/07/22: added another version for the players with disabled lifespans (or any custom extra long lifespan):
Neonate — 14 days, Ancilla — 140 days.

ORIGINAL DESCRIPTION:
Here goes my first mod.
I made sure to test it the best I could, but if you catch any bugs, please, let me know!

What is this mod for?
It's an attempt to make playing vampires a tiny bit more immersive, to try and give you some new ideas for your own vampires related stories.
The mod adds three sub "life stages" (or should I say "unlife stages"?): "Neonate", "Ancilla" and "Elder" — for vampires, in the form of personality traits. Each of them indicates for how long a vampire has been around from a storytelling perspective through the moodlets and social interactions (both mostly specific for each trait), as well as minor gameplay changes (e.g. young vampires will be hungrier, especially when there's a living person* in the room, or it'll be much harder for an older vampire to connect and build friendships, etc).
* i.e. any Sim that isn't: a pet (yes, that was a thing), a ghost, a vampire (manifested) or the Grim Reaper.

What does this mod add to the game?
3 personality traits that you can get through the gameplay, 9 social interactions and 48 moodlets, including some occasional and proximity buffs.

How do I activate the mod in the game?
For the existing vampires and vampires made in CAS you'll need to use "Show the dark form" interaction on them to receive the "Neonate" trait. Because of that, the Sims turned into vampires "naturally", through the gameplay, will receive the trait automatically. One trait will be replaced with another overtime, you don't need to do anything special to get it.
"Neonate" trait will last for four days, "Ancilla" — for forty, "Elder" stage is infinite.
Curing vampirism will remove any of the three traits, as well as the moodlets that go with them (the latter might take a bit for the game to process, so, unlike the traits, they'll not disappear instantly, but they will go away).

What kind of moodlets will I see? 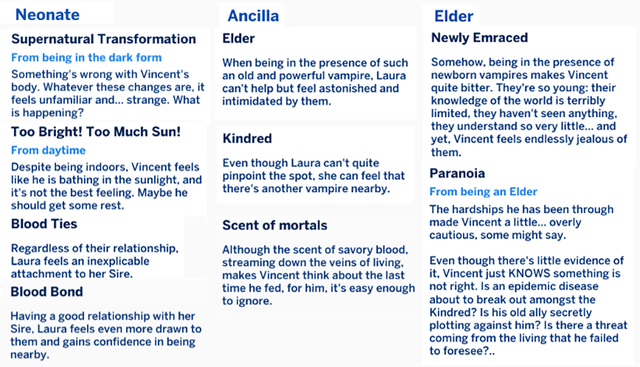 Main gameplay changes for each trait:

Neonate: their thirst will decay faster than usual, especially if there's a living person nearby; their energy will decay a little faster, overall and especially during the daytime. They will get a bonus to the "Vampire Lore" skill (will learn it faster and will be able to perform actions from a higher level of the skill) when they're near their Sire (i.e. the person who turned them) with whom they have a good relationship.

Ancilla: their thirst will decay as normal when on their own, but still will be decaying a little faster when they're near the living; their energy will still decay faster than it normally would, but only during the daytime. They'll be gaining friendship slower than normally, and all negative outcomes of social interactions will result in a bigger relationship decrease**.

Elder: they'll have default vampire thirst and energy decay; they also will be no longer affected by the living nearby. Their friendship gain will be MUCH slower, and negative outcomes will decrease the relationship score even more, so it's going to be really challenging to connect for them or with them**.

** I didn't touch the romantic relationships for any of the traits as I wanted to keep the ability to play as a "romance vampire" for those who might want it.

Just a little note: personally, I like to use the mod alongside "MC Command Center" (so my vampires' needs decay faster in general), and the mod is set up with that in mind. Because of that, in the unmodded game some of the tweaks might not be as noticeable. Please, let me know if you'd like to see a different version of the mod!

Although I can't promise to add anything, if you have any suggestions, please, feel free to submit them!
And if you happen to want to help me improve the writing of this mod, especially in English, I highly encourage you to contact me! I don't bite, so, please, don't be shy!

For a full list of packs with names, see the Packs Needed popup.
Tags