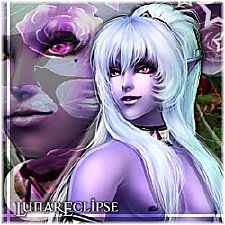 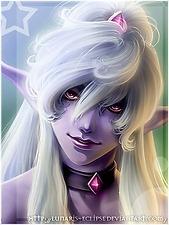 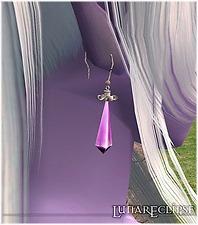 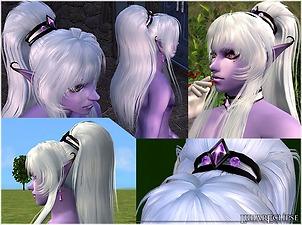 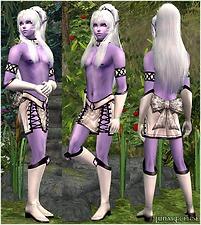 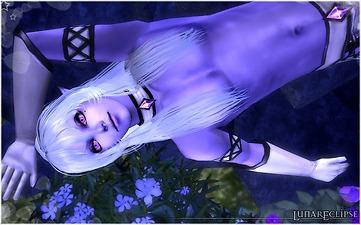 46,603 Downloads Quick download 3,519 Thanks  Thanks 313 Favourited 398,528 Views
Featured Upload!   This is a featured upload! It showcases the best talent and creativity available on MTS and in the community.

Okay, this is my first Original Character Sim I've shared. He's extremely effeminate, so I'm not too sure how many people will be interested in him, but hopefully some people will like adding him to their neighborhoods.

He's originally from a manga/comic I was supposed to do, but have not done yet called "The Lust of Magic". His species is one I made up and is a mix between faeries, elves and half-beasts. He's normally supposed to have a long, fluffy tail.. but I am not too fond of big long tails in sims as they tend to cut too much and look stiff. So I omitted the tail. The bow on the back of his outfit normally sits on top of his tail. ^^

He's also originally about 3-4 feet tall, but I omitted that as well. That just would not work properly for an adult sim. :P

He has no official last name really... but if you want to keep him OC, you can use "Mynx" as his surname.

Also, you can keep his personality in character as well if you like.

Aspiration: ROMANCE (In Caps because any other aspiration would be OOC!!)

Gender Preference: Males (If it's not already Obvious).

Mirador was originally made for my own use and as my new website model. So I was not taking polycount into high consideration. This is a warning among many because this sim is VERY high poly. It's mostly the hair. But please be warned. He also has FIXED bumpmaps that look very nice.

Why am I saying "Fixed"?

BECAUSE, I have discovered my older sim downloads have some display errors!
I have recently acquired a new videocard and witnessed some very ugly problems with my old bumpmapping. My older card displayed the mapping, but not effectively, so I only discovered the issue now.

You will not see the problems on my older sims if your videocard is older and is not showing the bumpmaps, but if bumpmapping is enabled, I HIGHLY suggest going back to my older sims (if you've downloaded them), reading the updates, and getting the new outfit files with the FIXED bumpmaps!!

As usual, here is more in-depth info.. so read On!

Yes, back to the MS3D facial adjustments used on all my sims!
The 3D model for Mirador's face was imported into MS3D after undergoing much work in bodyshop.

His genetics were programed from toddler to elder. So babies will get all the new pretty genetics. XD

Want to try all this excessive work for yourself?
Read HystericalParoxysm's wonderful post here:
How to 3D Edit Faces (Yes, Really!)

Mirador's ears are an accessory, and not part of the actual face or genetics. However, he does have the genetics for maxis elven ears. So he can still spawn pointy-eared children.

All genetics and make-up textures are mine. Except the beauty mark by Sunken-Woglinde.

**Monster High poly hair Mesh! Make sure you read the polycount posted further down before downloading. It's very high! Much apologies.

The features on the hair are as follows:

For the female version of the "Stardust Nymph" hair, you'll need to grab the extra rar file!
But the mesh itself is bundled with the Mirador sim.

The hair meshes and textures are my own. Textures digitally painted via photoshop.

New mesh with new textures that are all my own.
Also has some very nice bumpmaps.

I've made his special ears. They are long elven ears with lynx-esque tips.
The should appear for all outfits and nude.

I also made the above earrings. The jewel is reflective.

Marloup Ears:
-Holds Bumpmaps.
-Appears on all outfits + nude
-Available on all ages and genders

-The ears where made to fit mirador (who has maxis elven ears), but they may fit okay on other sims too if they have small enough ears.

Crystal Pendant Earrings:
-Appears on all outfits + nude
-Available on all ages and genders

-The earrings were made to fit the special ears, although they may be okay on regular ears too.

I suppose it doesn't matter if I offer a comparative picture or not, seeing as he is my own character, but I will anyways.

All mesh files are included in the main rar with Mirador.

Double click the sims2pack to install, then put all remaining files into your downloads folder!

For the female hair if you want it, download the additional Fhair package. You still need the mesh in the rar with Mirador however.

Mirador SHOULD work in base game! I made all files originally from base game package files only. Hopefully there are no issues. I have OFB installed, but nothing later.

*Ignore the BV file if you do not own the "Bon Voyage" expansion pack!

Downloading for Bon Voyage:
I have taken the time to bin the ears and earrings for the BV expansion pack.
To fix them for BV follow these instructions:

-Install Mirador and all other files first!
-Afterwards, extract the "fixed for BV" accessories found in the extra rar on this page.
-Override the old files in your downloads folder with the new BV ones.

If something does not appear, let me know. I do not own the BV expansion pack, although I've had others do some quick tests.

-Now there ARE other hair meshes I've seen with much higher polygons than mine has, so most newer PCs should be fine. Just be careful.


Mirador belongs to Lunar Eclipse. He's my character, so please be nice to him! ^^

I've Started work on my new Sims Webpage, Downloads are not up yet, but almost everthing else is: Eclipse Sims 2

I'm back, but not really online too much.

If you've messaged me here, my PMs are disabled. Please read the autoreply for an Email.*hugs*