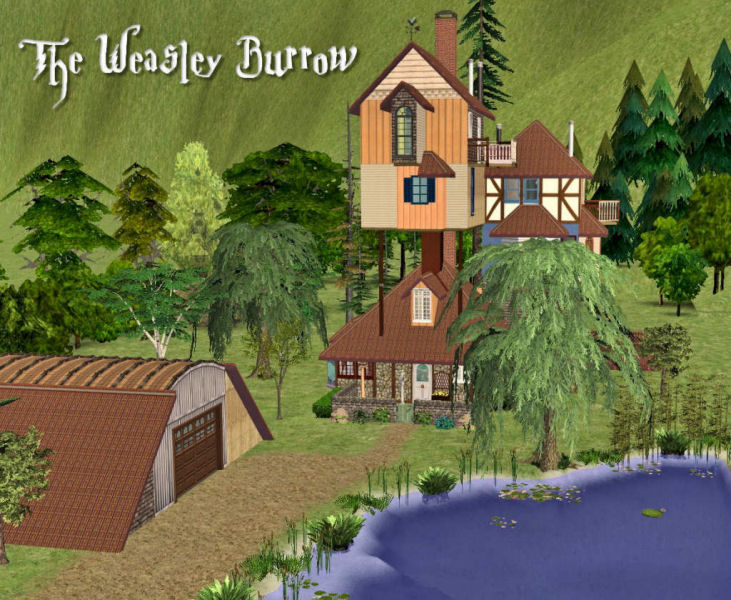 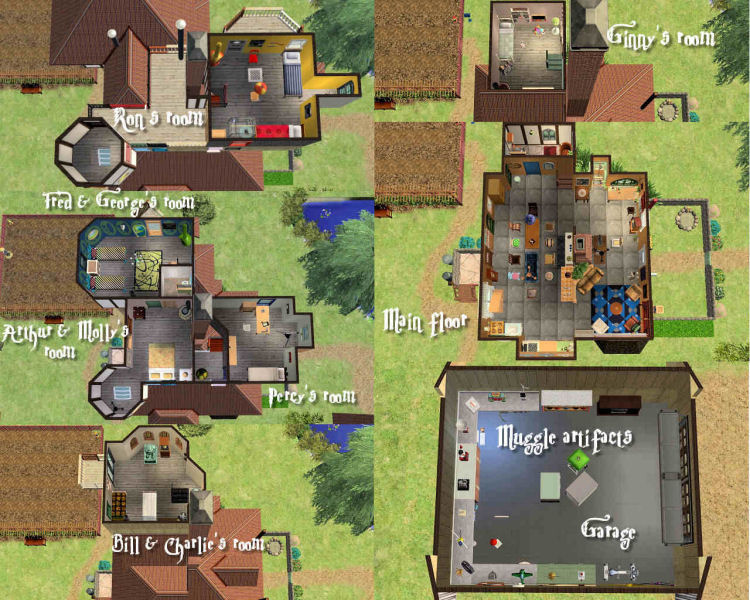 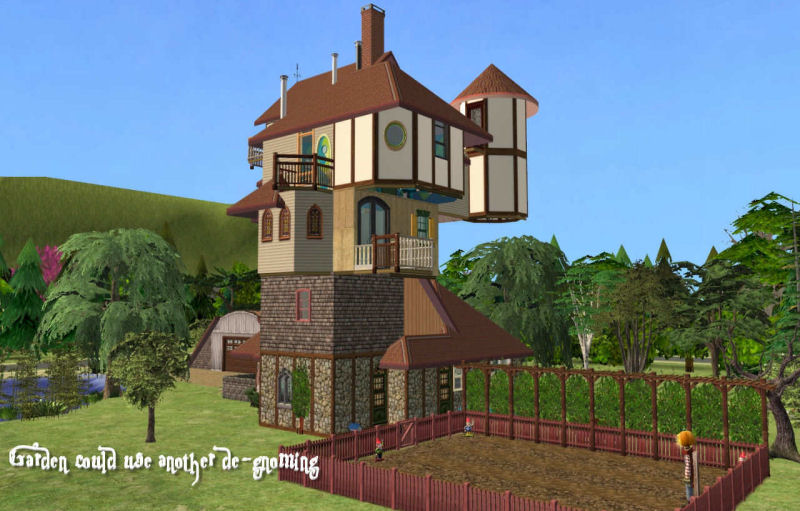 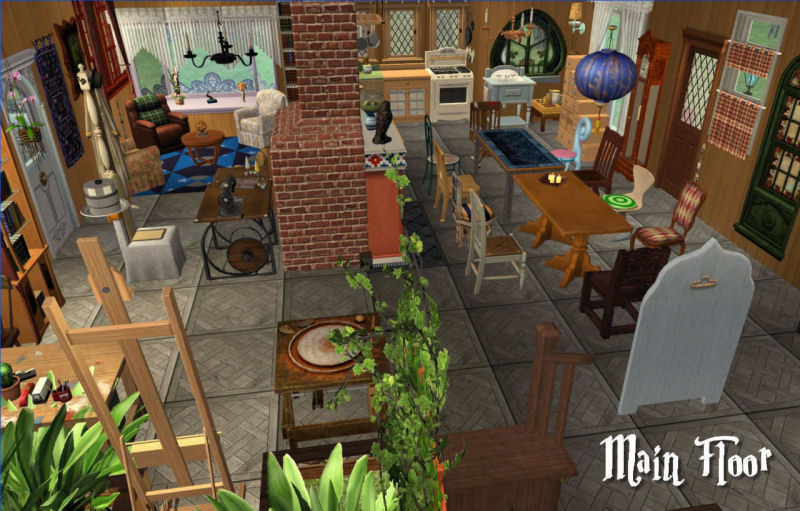 At one time -- back in Summer 2005 when I only had the Uni EP, I built the Weasley's house. Unfortunately, I built it on a lot that didn't start out being level, which I found out later is a very bad thing for people who place lots in neighborhoods like Veronaville, as non-level lots seem to permanently alter the terrain. In shallow neighborhoods, this can cause really bad flooding everywhere. So, I decided to remove most of my lots on the exchange and was going to rebuild someday. Until now, I haven't had the motivation to rebuild this one, but I can't help but get excited about the new Apartment Life expansion pack that's coming out in less than a month. I think it's really cool that finally there will be at least a little more magic stuff in the game. With this in mind, I thought this would be the perfect time to dust off and rebuild The Weasley Burrow.

The Weasley Burrow is 5 stories high, and has 6 bedrooms and 2 bathrooms. The cost is §155,244, although I don't think the Weasley's paid that much, as it looks like most of the building materials were salvaged from abandoned homes and buildings. In defiance of physical laws, The Burrow must be held together mostly by magic. With "stealth stairs" throughout the house, your Weasley sims (except lucky Percy) will have to endure having little privacy, as just about every bedroom is the pathway to the next level up.

Of course, after I rebuilt the original Weasley Burrow because of the non-level edges issue I mentioned, I discovered that with LotAdjuster the edges could be fixed. This is called Murphy's Law, but that's OK. So, I loaded The Basegame + University on my hubby's computer, fiddled with LotAjuster, and yada, yada, yada... the lot is now flat. The floor plan is the same is the original, and the price is about §100K. Please read: I don't think that the modified original (Uni) lot will cause any issues, however, please report any problems that you think may be related to my use of the LotAdjuster in this thread.

For pictures or a .zip file of the original lot, see my blog here.

For a .zip file of the All EP's version of the lot, see my blog here.

Recommended File for All EP's version: If you happen to recover your enchanted car from the Forbidden Forest, you will probably want an invisible driveway recolor which unfortunately didn't package itself with the lot. If you don't already have such a recolor in your Downloads folder, roddyaleixo has some you can get here.

Requirements note for All EP's version: I used all EP's up to FreeTime. I also have Family Fun and Celebration SP's installed, although those may not required, especially if you install the house with Clean Installer. I don't usually include items from the Stuff Packs in my uploads, however I did with this particular lot.

Additional Credits:
Thank you to Mootilda for the LotAdjuster which allowed me to fix the Basegame + Uni version of this lot.
Tags: #harry potter, #witch, #wizard, #magic

Back to download view
18 Comments / Replies (Who?) - 15 Feedback Posts, 1 Thanks Posts
Hide Thanks Posts for this thread (Show only feedback)
macm09

Applause! All I can say is that this is superb work! I love everything about it and I love it so much that I'm going to download and put it right in Veronaville because that just so happens to be the neighborhood I am playing right now! Thank you so much!
jhd1189

Very nice! I love the eclectic look that you gave the Weasleys' house, and it looks like it must have been a lot of fun to create.

Awesome! I love all things Harry Potter and this is the best Burrow yet! This is going into one of my neighborhoods right now Thank you, thank you!
DreamWhisper
Test Subject
#5

I'm not a big fan of all the Sims 2 Harry Potter stuff floating out there. I like Harry Potter just fine, but just not for the Sims. Anyhow... THIS house happens to be the ONLY Harry Potter related content that I have wanted for my game! With that said: Thank you very much for taking the time to complete it again and share it with us here at Mod the Sims 2! You have done a wonderful job of it!
Kolipoki

This is awseme it looks just like in the movies. Great job.
Retiring
xox_loey

What a wonderful upload! It looks so amazingly and adorably muddled, just like how the books describe, and as portrayed in the film! Big thanks coming your way

This is by far the best Burrow I've seen!! I've just got a new computer and as soon as it gets here I'm loading Sims and loading this lot!!! Can't wait, especially now since we can have witches/wizards with Apartment Life!!!
You have suffered enough and warred with yourself. It's time that you won...

This is great! I love the mismatching furniture! Thanks for sharing, your lots are awesome.
PixieNixy

this is definatly the best burrow yet. You have used pillars well to make it look more narrow, hence this burrow looking more like those we imagined in our minds and the CoS burrow than other bulkyer ones here. I really want to download this but i can't as I don't have Uni, or any of the newest EPs.

The Mismatched furnishings make it look alot more weasley-ish than others. Well done !

you might Have inspired me to attempt making the burrow myself... ( if I get the game working that is...)

jessica94ere xx it would be nice if we saw other HP buildings by you - you would be able to build them amazingly if you wanted to. (L)
"Never say goodbye because saying goodbye means going away; and going away means forgetting."
PrettyKitty23

DUDE! This is too cool! Very unique! Never saw a house like it! makybe you should make a house look like an elephant! ;D
"Open your mind before your mouth."
-Chris Motionless from Motionless in White
Xianny

This is ADORABLE! I love it. It looks so jumbled together and homey.
I welcome requests - PM me!
sandersims
Lab Assistant

No way! I'm squealing like a little girl. I keep thinking "Is that PLAYABLE?" So sad that I don't have all the EPs. But awesome wonderful work!!
Fleur-Delacour

WHAAAAAAAAA this is cool.. all i can say is.. totally ehm perfect?
Pass the ribbon around if you know someone that survived, died, or is living with cancer.
(())
//\\
lientebollemeis

I will try it out immediatly.
Thanks a lot! Just what I needed for my Weasleysims!
Overview all my creations (MTS and beyond): Download at once (SimFileShare)
FAQ and policy: Policy S2I
The School Project (finished): The School Project (Completed)
Over 500 new food items to come in Fast & Healthy Cooking Project: F&HCP
Facebookpage: www.facebook.com/sims2idea
almalindaxd
Test Subject
#16

Your talent is incredible. I'm so glad geniuses like you exist!!!
exxclusive
Test Subject
#17

Gorgeous!! Simply amazing! You are an artist in the Weasley ways!
NG55
Test Subject
DELETED POST
1st Feb 2015 at 2:05 AM

This message has been deleted by NG55.
LadySappho
Test Subject
THANKS POST
#18

Oh, this is great. It's almost exactly how I picture the Burrow and it's going to save me from having to build my own!