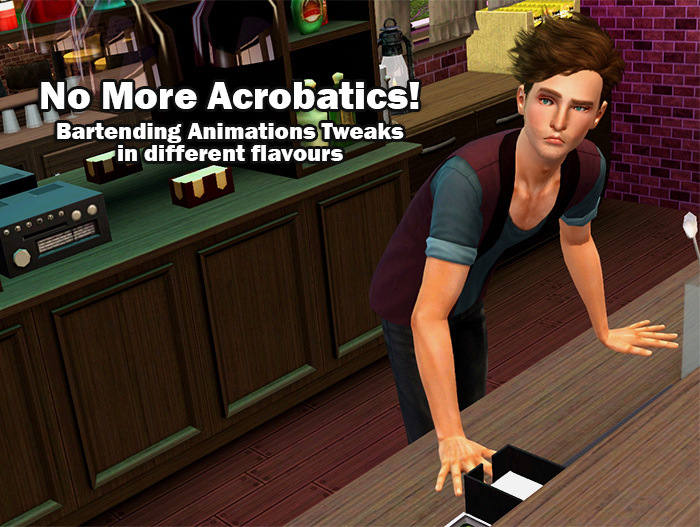 It was pointed out to me by tizerist, that all the showing off professional bartenders tend to do can be a bit much. I mean, sometimes you just want to get juiced and all the juggling and fire-breathing can get in the way.

Well, this mod modifies the JAZZ script file for professional bartending, which is responsible for the different animations played when tending professional Bars.

The main idea behind this mod was going from this:

- I changed what animations are looped when making drinks, so that only the lower skilled ones, without any stunts, will be played.
- I've also lessened the chance of playing the fail animation to be the same as the expert skill level, whatever may be the bartender's actual skill level.
- And finally, I replaced the blowtorch animation at the end of making flaming drinks with the one for regular drinks ; the bartender just puts the drink on the bar and it magically lights up.

- Maybe you like the stunts, but you also want your bartenders to actually look competent? This time, only medium skill and high skill animations will be played.
- And same as above, I've lessened the chance of playing the fail animation.

- This one is if you actually like the little stunts and want to see the progressing skills of your mixologist. I didn't touch anything concerning how animations are looped.
- I've just lessened the chance of playing the fail animation and I replaced the blowtorch animation, as a way of gaining time when making drinks.

Bonus: for a tidier look, I've gotten rid of the sloshing effect when the bartender is stirring the drink with the shaker ; this was done with a simple alpha edit on a texture (IMG). As it is a separate package included with each flavour, you can choose to use it or not.

This mod is an Override of the JAZZ script for professional bars.

You can simply place the package file(s) in : Documents\Electronic Arts\The Sims 3\Mods\Packages

There are six files available for download. For each flavours (3), there a two versions:

Only use one flavour at a time!

Only use the package if you have the corresponding EP(s)!

This mod requires at least Late Night, with or without Island Paradise.
This mod was created with patch 1.67
This mod shouldn't conflict with any other mods as long as they don't modify the following resources:

Hope this will be useful to some of you!


Additional Credits:
Peter & Inge Jones for S3PE ;
TigerM & Peter Jones for Smooth Jazz Editor ;
TizerisT for the suggestion and support when I was rambling through my failures ;
Butterbot for knocking the stupid out of me.
Files Need help with downloading or installing content? Click here!