Bedwetting for everyone (Pets ready) 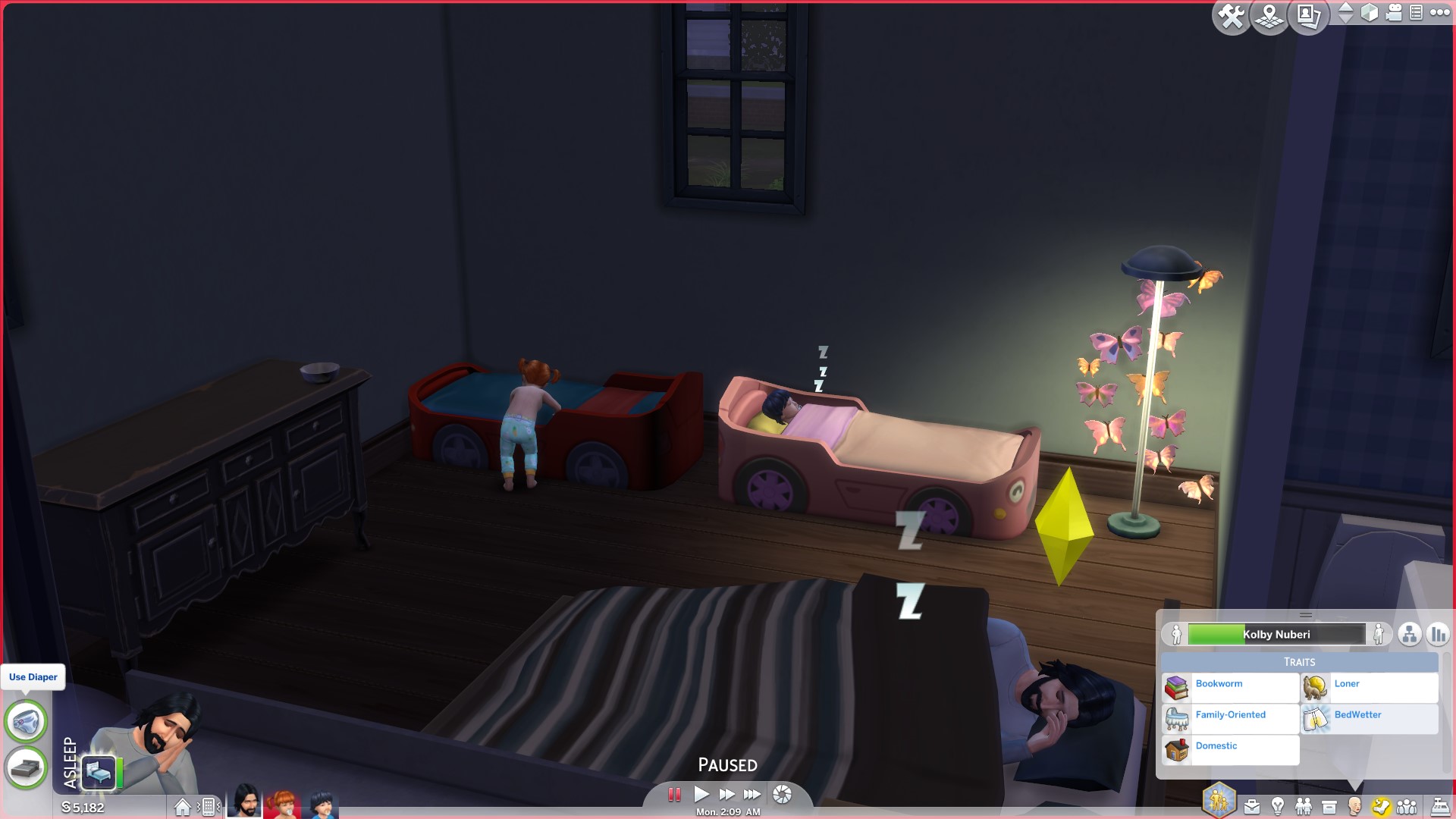 In this current state of beta, both traits can be acquired by using 100 reward points in the reward store.
Sims without one of the 2 traits will not wear diapers or act different in any way.
You can acquire both traits at once that way, but it does not make your sim more incontinent, just because he is a bedwetter too.

As you can see from this list, even nap functions of toddlers are affected, even in the original sims 4 version (without any mods).
I could not fix the functions for toddler, but "bed_Nap", "sofa_Nap" and "chair_Nap" work just fine now.
If someone knows about a fix, please share!
- McCmdCenter was incompatible to my mod. That was because of a xml used for debuging only. Should now work fine.
- I added interfaces to python-functions into the xml. They do nothing in this version (short generating a log if you activate this). Will be used for messages for the player in case of accidents

- "bed_Sleep_Butler" and "coffin_Sleep" now support nighttime accidents too. "Tent_Sleep" can not because of the same problem with "looping_content"-animations. The only solution would be to remove the animation for now...
0.24:
- Cleanup of translation files, should be now the last problem involving McCmdCenter. In 0.23 McCmdCenter was working, but some translations where missing because of the overwrite by my translation nodes.
0.25:
- Any type of shower or bath action is now supported for changing diaper, but any of the 2 actions have to end on there own. Use the dresser if you only want to change the diaper.

0.26:
- New log system that now works even if the program is packed. Because of stupidly bad error reporting by sims 4, 3:30 hours debuging and 18 restarts of sims 4 are included.
- Config file writer that can save/load configurations. Config file can be changed by program or user to change behaviour of this mod (currently no working settings, even if it looks like it)
0.27:
- Compatibility patch for version 1.36.99.1020. Changes for Pets expansion pack changed the way "species" is handled.

Compatibility:
In general this mod will clash will all other mods modifying one or more xml i modified too.
"motive_Bladder", "sim_BladderDistress", "bed_sleep" or "shower_TakeShower" for example.

I also overwrite "whims.whims_tracker", so all mods modifying/adding rewards will probably not be compatible.
If you implement other mods with rewards after this mod and you can not find my traits any longer, you can also add them by console command.

A complete list of all overwritten xml so far:

Reward:
- Adds both traits as rewards into the reward store. I have not found another way to do so. If you know one, please comment.

Buff:
- Stop sims from running to a toilet or waking up (depending on the trait).

Interaction:
- Implement changing diaper as part of cleaning up in shower/bath

- Unify toddler and bigger sims with diapers and autonomy

- Stop sims from running to a toilet or waking up (depending on the trait).

Loot:
- To stop sims from making there clothing wet and needing a bath in case they have a diaper equipped in case of a fart gone wrong

- Inject point for my own statistic module.

Motive:
- To stop sims from running to a toilet

Dev-Infos:
Original py-files are included, take what you like. Go nuts.

Additional Credits:
All sims wet their bed by sachamagne - Mod is outdated, so i have written this one.
NUK Pacifier by victorrmiguell - They even move with the mouth of the toddlers. Used in the screenshot.
Pampers Cruisers Diapers by kratoscheky - Even with cloth, diaper sticking out. Used in screenshot.
Other Information

This is a SCRIPT-MOD!
To make scripts work (and with them this mod) you need to activate script mods in Sims 4.
This can be found in the settings of Sims 4 after starting the game.