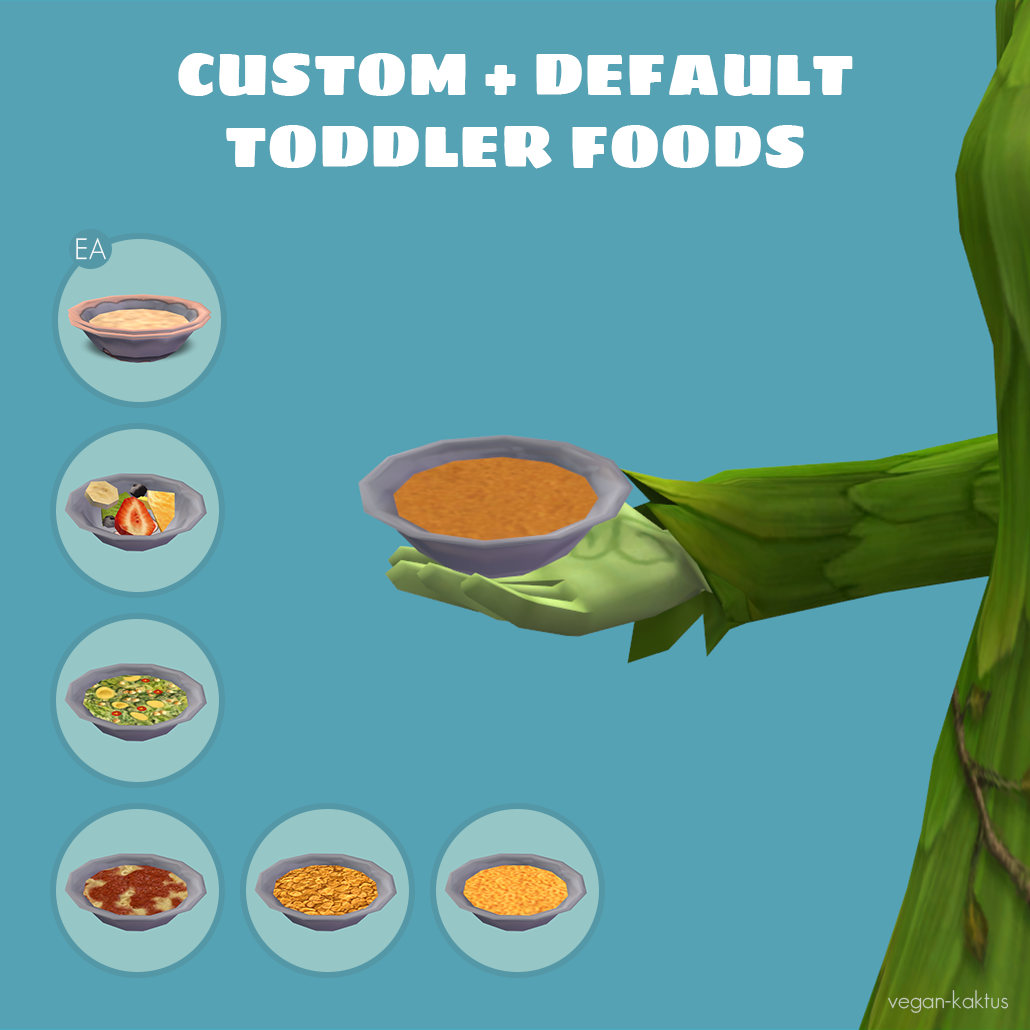 Four of the custom foods are repo’d to these textures:

Meaning they will pick up EA’s original or any default you might have for them. The fifth one is bienchen83′s default but custom. They are all basegame compatible! I replaced EA’s mush texture with some random texture I found in SimPE and re-sized it to 64x64 (EA’s original was 128x128). I also removed the groundshadow.

All custom foods have been translated to every language the sims is available in, and instead of clogging up your fridge pie menu, they have all been placed neatly in a submenu. I don’t speak any other language than Swedish and barerly English, so please let me know if anything is too awkward or incorrect! I used EA’s text lists from the foods in question and copy-pasted + used google translate a bit. I didn’t use EA’s danish translation for the macncheese though, it was originally “junkfood” but I changed it to “Makaroni og ost”, and if you open up my toddler cereal in SimPE and wonder why that one has its own txmt (still repo’d to EA’s texture though) while the others are repo’d to EA’s txmts, it’s because EA’s original txmt for the cereal had a weird lighting.

For some reason, EA have multiple toddler food bowl resources and in-game two bowls are used at the same time. I fixed this and also re-mapped the bowl + edited the texture and re-sized it to 128x128 (EA’s original was 256x256 and I didn’t see the need for such a small bowl to be using a large texture like that). EA made a dirty texture for the bowl as well, but it seems to be unused. I edited the txmt for the dirty texture to point to the clean texture just in case.

As usual, all files have been compressed to reduce file size. Keep in mind you can only have one default for the toddler mush in your downloads folder at a time, and any edit to the text string resource I edited in my mush default will conflict with said default. If you don’t install my mush default but use any of my custom toddler foods, there will be two pie menus on the fridge. In other words; no files in this download are dependent on each other, but I recommend to install my default if you’re planning on using any of my custom toddler foods!

This is my first time making custom foods, so please let me know if you find any issues or GUID conflicts! Also, I don’t think these will corrupt your game if you remove them from your downloads folder (like custom adult foods do) because they don’t seem to create any memories, but I’m not 100% sure!

Edit: I included a second default file for an anon who wanted EA’s original mush texture. I re-sized it to 64x64 though, since EA’s texture is really blurry (so 128x128, the original size, is not necessary). Choose one of the defaults!

Edit #3: a big warm thanks to jellymeduza​ for fixing my custom toddler foods! :-D please re-download and add two of the four new BHAV files included in the download. Versions compatible with lamare’s accessible toddler high chairs and toddler outings and restaurants are included! Instructions on which to use are included in the download :-D I also fixed my polish translation for the fruit food, so if your game is in polish then please replace that file with the one from the updated archive! (thanks to jellymeduza for the feedback!)

I mainly make default replacements which I share here :-) you can find more of my stuff over at my tumblr. My TOU can be found there as well! :-D