Spring Cleaning -- An Assortment of Vaguely Spring-Related Tweaks (UPDATED: 23 May 2022) 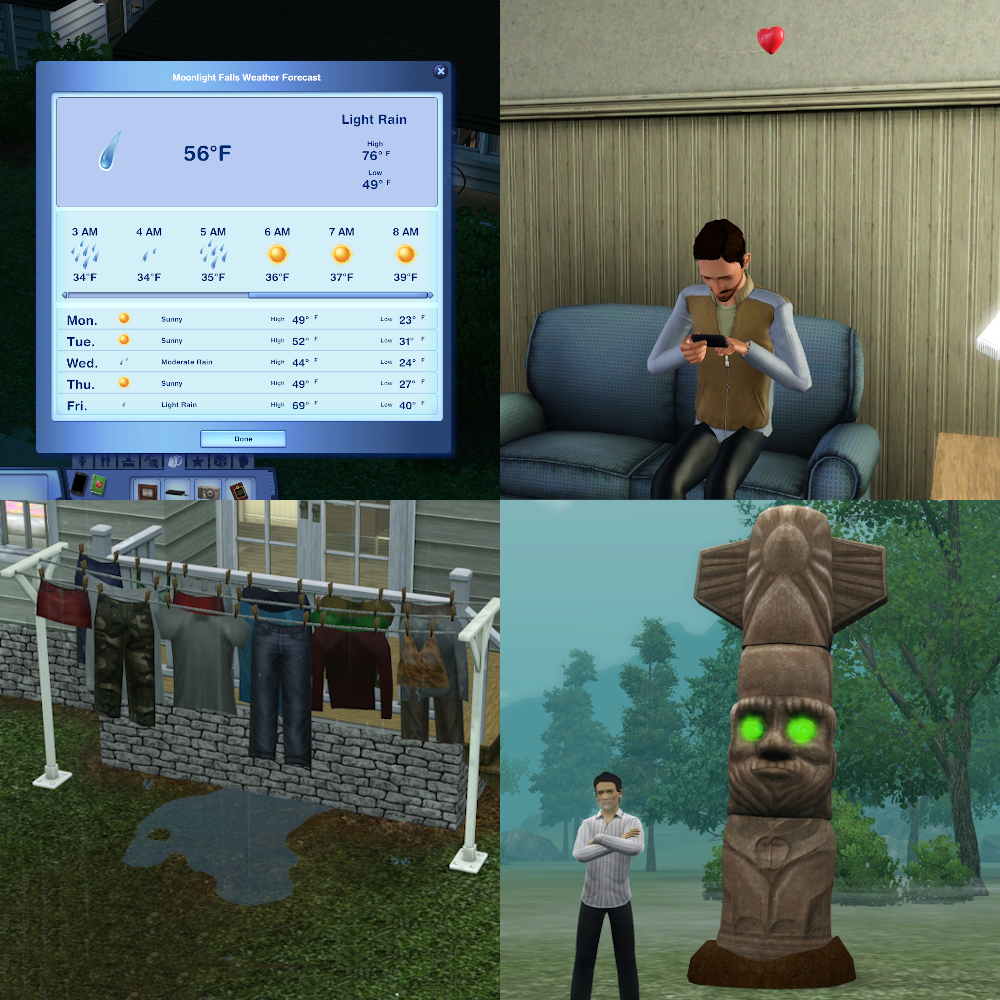 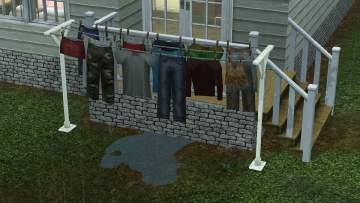 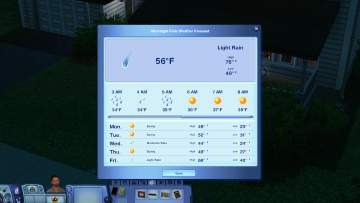 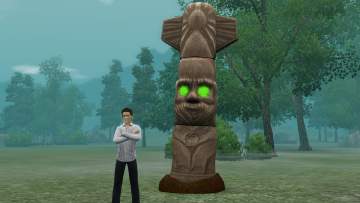 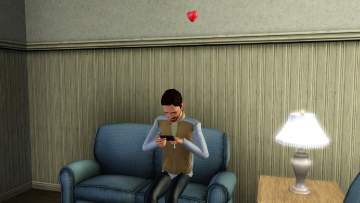 Created by gamefreak130 View Policy / About Me View all Downloads  Patreon What Is This Mod?
This is a collection of four pure script mods that make a variety of tweaks with the aim of providing a bit more fun and realism to springtime activities. The exact features of each mod package are detailed below.

No Magic Clothesline
As it begins to get warmer outside, you may want your Sims to start using outdoor clotheslines to conserve electricity and get some fresh air while doing laundry. However, since the release of Seasons, clotheslines have had a glaring oversight: even in the middle of a thunderstorm, laundry will magically become dry in just a few hours!

This mod fixes this oversight by checking all clotheslines with laundry hanging on them every 15 sim-minutes. If it is raining and the clothesline is not protected from precipitation (i.e. covered by a roof), then the hanging clothes will be reverted to the "wet" state, and the time required for them to dry out again will be reset. This means that wet clothes will remain wet until a break in the rain allows them to dry out, and dried clothes must be collected before rain comes along and soaks them again!

Weather Forecast Tweaks
Springtime weather can be quite volatile -- sunny one minute, stormy the next -- so it's important to have an hour-by-hour forecast of what's going on outside. The default weather forecast, accessible only by computer, newspaper, and TV, is pretty useless in that regard.

This mod improves the "Check Weather" interaction by making it available on smartphones as well, meaning your Sims will always have it at their fingertips. It also improves the general accuracy of the daily weather forecasts and the min/max temperature predictions, and it adds a shiny new UI layout with an hourly forecast when viewing on a computer or smartphone, so you can see exactly when that next round of hail is going to start. As an added bonus, this mod also fixes the endlessly rainy summertime weather that's been bugged since the release of Seasons. Now spring, not summer, will be the true rainy season!

The game manages weather using a queue of future weather events stretching a week into the future that is updated every few game ticks. The start time of each queued event is effectively the end time of the previous one. When a new event is queued, the game assigns it a random end time such that its scheduled duration falls within minimum and maximum values defined by XML tuning (or in-game through NRaas Tempest). When the weather manager runs its update routine, it checks to see whether the scheduled end time of the current weather event has passed, and if it has the next valid weather event is removed from the queue and started.

What does "valid" mean in this case? Before the game starts the event, it checks to make sure the duration of the weather (from the current game time to the scheduled end time) would not be less than the minimum value defined by the tuning. If it is, it is discarded, and the NEXT queued event is used instead, effectively extending its scheduled duration such that it starts at the current game time, but its end time remains unchanged.

In a perfect world, this scenario should never happen because the game already ensured the event was within the minimum duration when it was first scheduled. Unfortunately, we do not live in a perfect world: because of the significant tick delay between weather manager updates, weather events are often dequeued and started ever-so-slightly later (~50 game ticks) than their scheduled start time, meaning that a perfectly acceptable weather event can be dropped if it just happened to be assigned a duration at or extremely close to the minimum.

But even THIS shouldn't happen very often, and normally it doesn't! In the summer, however, the default tuning for "sunny" weather is a minimum duration of 12 hours AND a maximum duration of 12 hours. This means that any and all queued sunny weather will have exactly the minimum duration, and so it will ALWAYS be dropped due to the actual duration being just below the minimum as a result of the update routine's tick delay. If the next queued event after that happens to be sunny weather, then everything's OK and nothing changes, but if the next event is rain or hail, then its duration is extended to fill the empty 12 hours, and suddenly a storm that was only supposed to last a couple of hours now ruins your entire day.

This could be fixed by adjusting the weather duration tuning using NRaas Tempest, but that's just a workaround that doesn't really address the problem. Instead, this mod periodically checks for any queued weather near the minimum and pushes its end time back one sim-minute, enough to ensure its duration will be greater than the minimum even after the delayed update routine.

Truly Eclipsing Fog
Not everyone is a fan of warm, sunny spring days. Vampires are supposed to be able to use the Weather Stone's "Eclipsing Fog" to quickly lower the outside temperature and obscure the Sun's rays so that they can roam outside without fear. Unfortunately, while Eclipsing Fog does cool down the world and make Sims more receptive to vampire socials, it does not protect vampires from the Sun, but merely delays any negative effects that have not already started.

This mod replaces the "Eclipsing Fog" moodlet granted to the activators of the Weather Stone with a custom version applied to all vampires in the world that will remove and block all negative effects from the Sun for the duration of the fog, as if you had applied Vampiric Sunscreen. Because this modifies the Weather Stone, both the Seasons and Supernatural expansion packs are required for this mod only.

Smartphone Dating App
Spring is the season of love, and what better way to find your soulmate than by mindlessly scrolling on your smartphone?

This mod adds the computer's online dating interactions to the "Social Networking..." submenu of smartphones. Nothing more, nothing less. The existing online dating functionality is unchanged: find cute and/or hot singles in your area, message them and be messaged by them, and if the feeling is mutual, they will be added to your Sim's relationship panel so you can continue the conversation.

Tuning
The Weather Forecast Tweaks mod has tunable values that can be changed through the text editor in S3PE or a similar package editing program. The list below contains all the tunable values within the "Gamefreak130.WeatherForecastTweaks" XML resource. A modified copy of the existing "SeasonsManager+WeatherManager_0xdeb6de539e815293" XML resource is also included for adjusting, among other things, the "kWeatherPredictionAccuracy" value, which controls the accuracy of the daily and hourly weather forecast. kWeatherPredictionAccuracy has been lowered to 0.75 from the EA default 1.00; all other values are EA default.

The remaining three mods have no useful tuning.

Compatibility and Uninstallation
Built, tested, and (mostly) working on game version 1.69. Everything should work on earlier versions, but it has not been tested; do so at your own risk.

Technically, no expansion packs are required for these mods to run, but without the Seasons expansion pack (and Supernatural, in the case of the Truly Eclipsing Fog mod), they will be very useless.

As stated earlier, the Weather Forecast Tweaks mod overrides the "SeasonsManager+WeatherManager_0xdeb6de539e815293" XML resource and the Computer.CheckWeather interaction, and will conflict with any other mod that does the same. Conflicts with any of the other mods should be next to nonexistent.

Uninstallation should not create a huge problem -- simply remove the mods from the packages folder. However, to avoid potential game problems, it is good practice to ensure that no Sims are checking weather or using online dating on their smartphones, and that eclipsing fog is not activated, before uninstalling. After removal or update of the mods, it is recommended that you delete the "ScriptCache.package" file from your Userdata folder.


S3PE, Visual Studio 2019, and dnSpy for making modding stupidly easy
LINQBridge for enabling my newfound querying addiction in .NET Framework 2.0
Various modders and their scripting tutorials scattered throughout the Interwebs
Tashiketh for keeping this site up and running
My many test sims for putting up with my nonsense
And you, for checking out this mod!