I have been following this project since the beginning. The imagination and skills of those working on this project is beyond stellar and deserving of some serious recognition.
Advertisement
Nilxis

Hi and sorry for the late replies!
Thank you so much for the nice comments

Oh thanks! This makes me so happy because with these temple revamps I tried to use colors and patterns that I had never used before.

@Ali_Dunbar, thanks for stopping by and for saying that, I appreciate it

Just passing by and hope we see more soon.

I fear either Win 10 will be discontinued rendering this, so far, 6 yr project unplayable or I will be old and feeble and suffering from dementia by the time it is complete. That said, this Sims 3 fantasy World is by far the very best and deserving of a gold medal.

I think this project already got its own fan club. Long time projects are not something I like to follow. Anyways this one looks groundbreaking and effort amount is amazing. But I won't trust in my hope of that would ever finished.
Regards Vic
Here you can see more of my creations and conversions for sims 3. ;) I`ll glad to see your comments in.
topp

Honestly, I wouldn't even mind if it doesn't get uploaded. Just looking at the pictures alone is therapeutic enough for me.

Hi everyone and thank you for your interest in Uranesia. I know there haven't been upadtes lately, but that doesn't mean that the project is stopped or that it isn't going to be finished. You know we're doing this on our free time and all of us are working and have other life obligations that we need to put first, so all we can ask is for patience. And if Uranesia was ever not going to be finished, we would tell you. Keep in mind that we might not be active here, but we're uploading smaller updates much more often on Tumblr, so you can check these if you want. Hopefully we'll post something here soon, but stay sure that we haven't stopped working on it! Thanks for understanding.
Find all my creations here:
My blog: Nilxis Designs // My Tumblr page: http://nilxis.tumblr.com
daisylee

I completely agree with Daisy, there is nothing wrong with waiting for something great.
FuruFuruu
Test Subject
#510

Hi everyone! I am seldom on MTS, but I just wanted to pop in here and add to what @Nilxis said.

All three of us are indeed working on Uranesia when time allows it. Oftentimes other life obligations need to be met first, but with that being said, this is a project we are still very passionate about.

Unfortunately we are not a AAA gaming studio with loads of money, manpower, and resources at our disposal, so it is taking us some time to reach completion. Nevertheless, that does not mean we are not working towards our goal of release. We have made continued progress and our hope is to release the world within a reasonable amount of time. Although we are unable to give a date right now, there is an outline AND a finish line (hopefully before Windows10 is obsolete @looseal

To those of you that understand this, thank you. To those who don't, I ask to please try to extend patience and understanding to theses factors, and to the process. If you've been following a while, I know you can relate. Nilxis has garnered a following/support due to the consistency, quality, and detail of his updates.

This update is basically about bridges. There were three bridges that were made with the build mode tools, which makes it hard for NPCs to use them, and, if they are the only to cross a river, that can create routing problems. So I've added/changed them for alternative bridges that won't create these problems.

(some pictures are CAW screenshots, so the quality is not the best)

1: Wooden bridge in the swampy area: 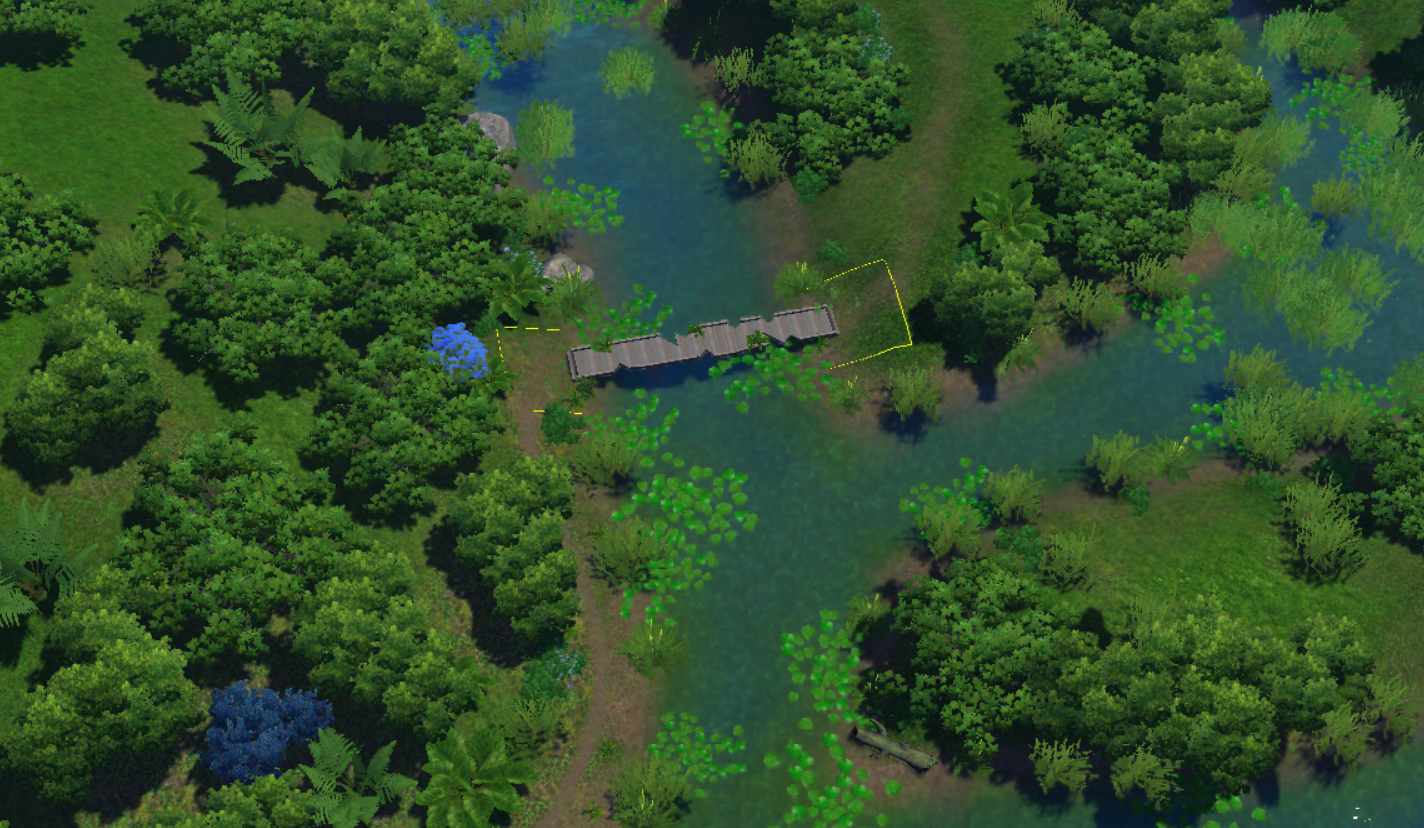 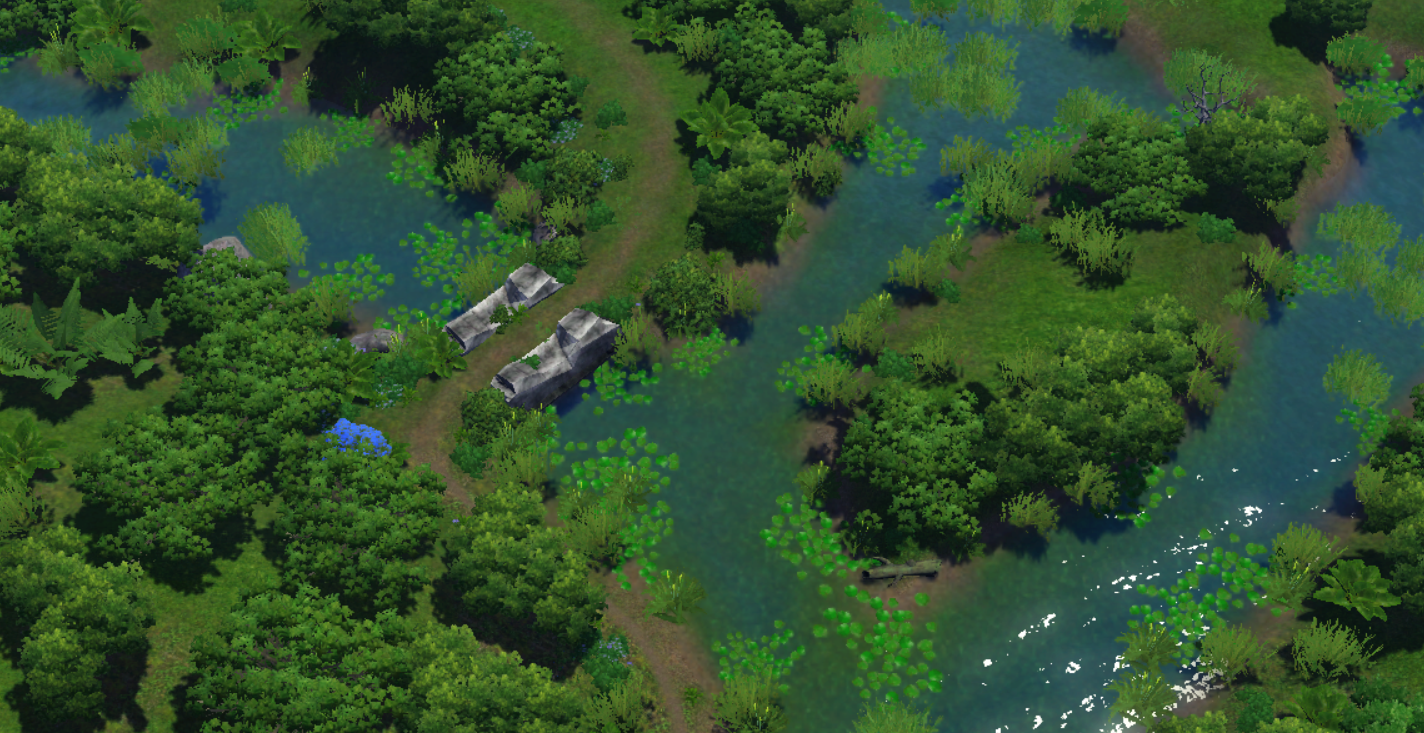 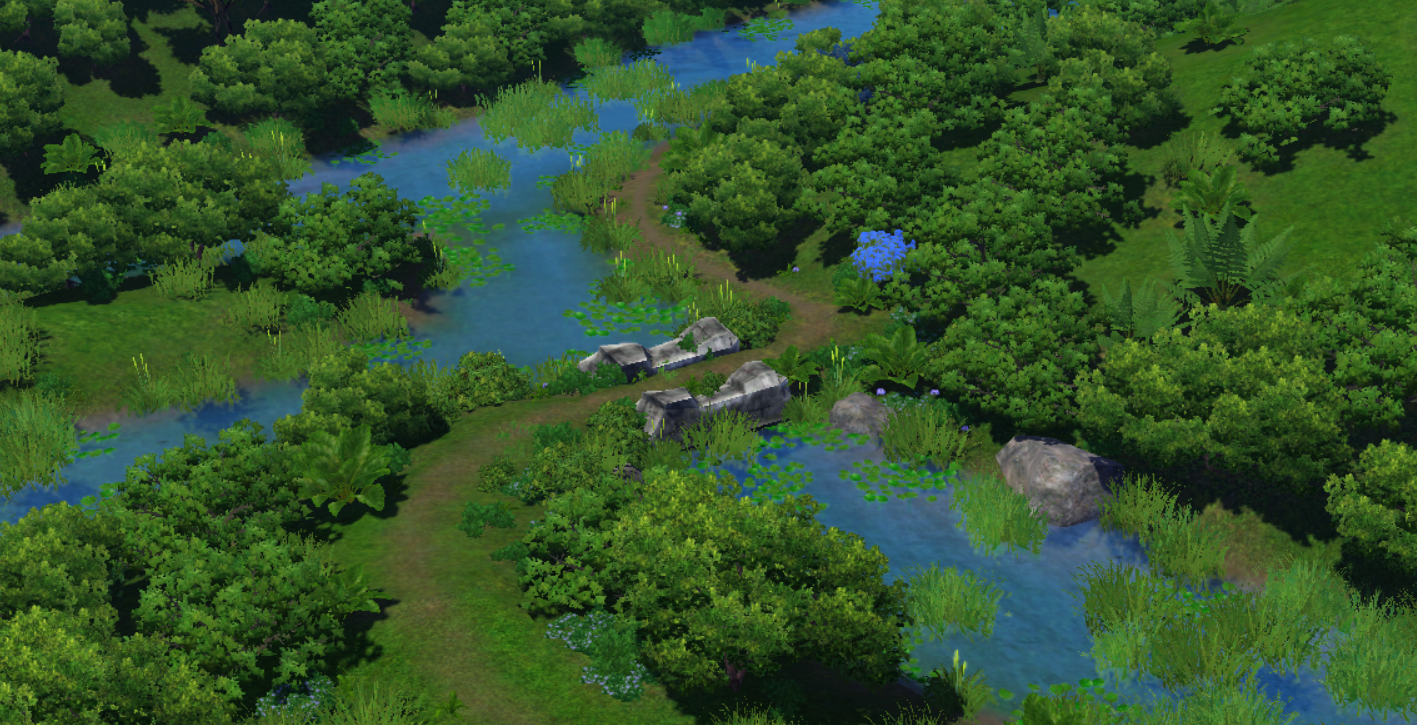 This bridge will not only work better, but it also makes more sense with the history of the place. It used to connect the city with the now destroyed temple by the sea, which was an important pilgrimage site. So it makes more sense that they built a more solid bridge and not a weak one made of wood.

2. The big stone bridge in front of the city: 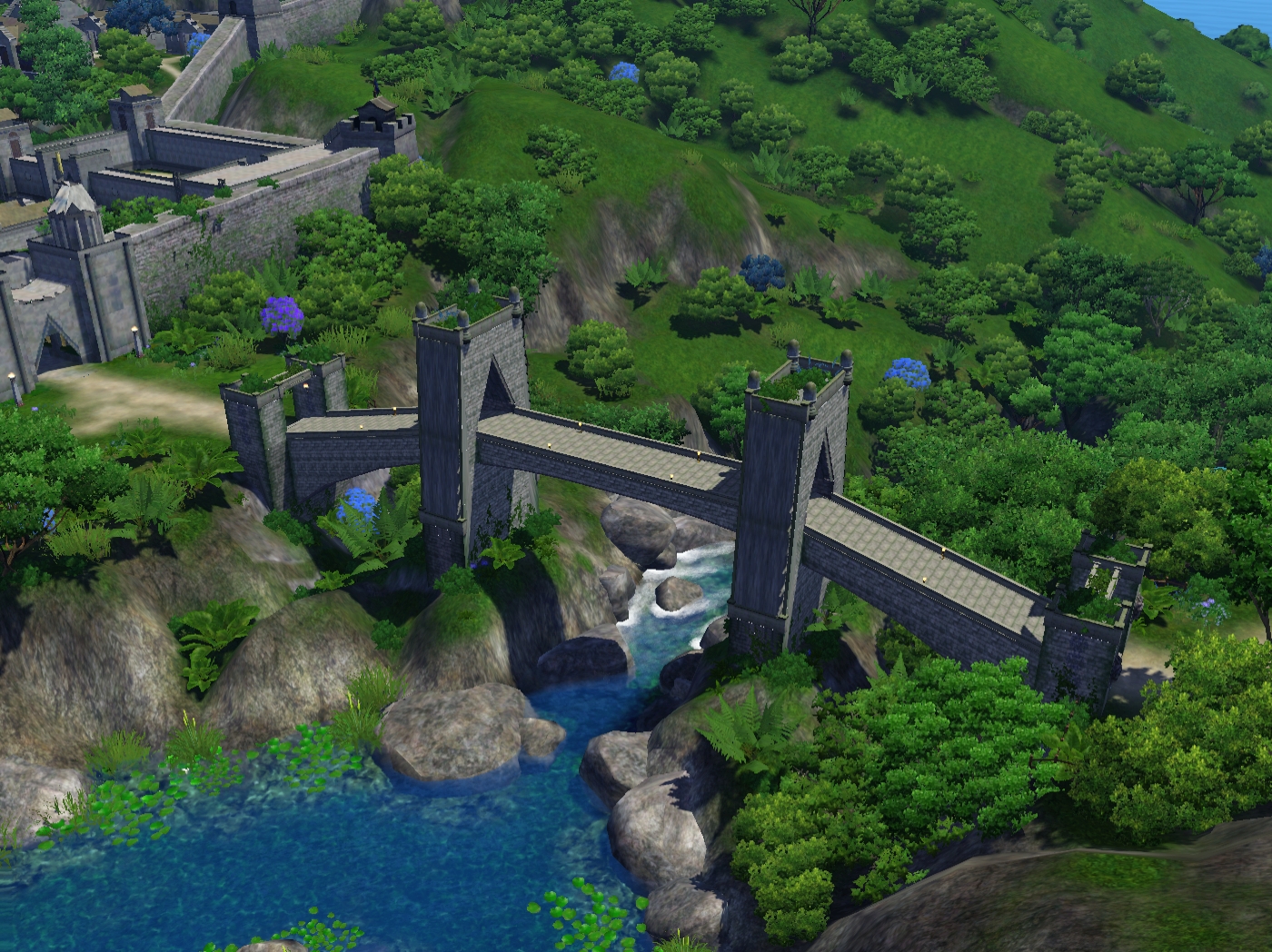 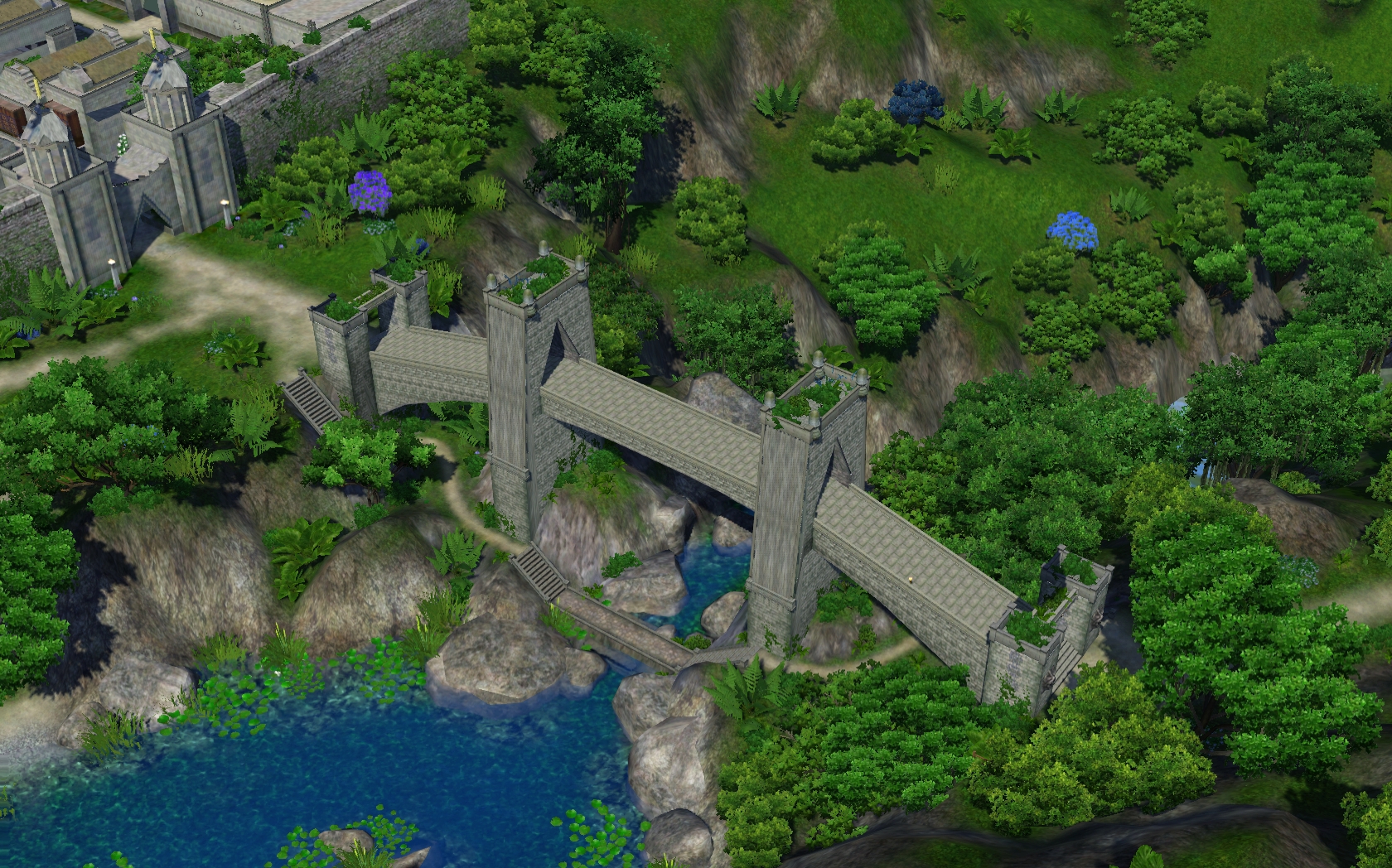 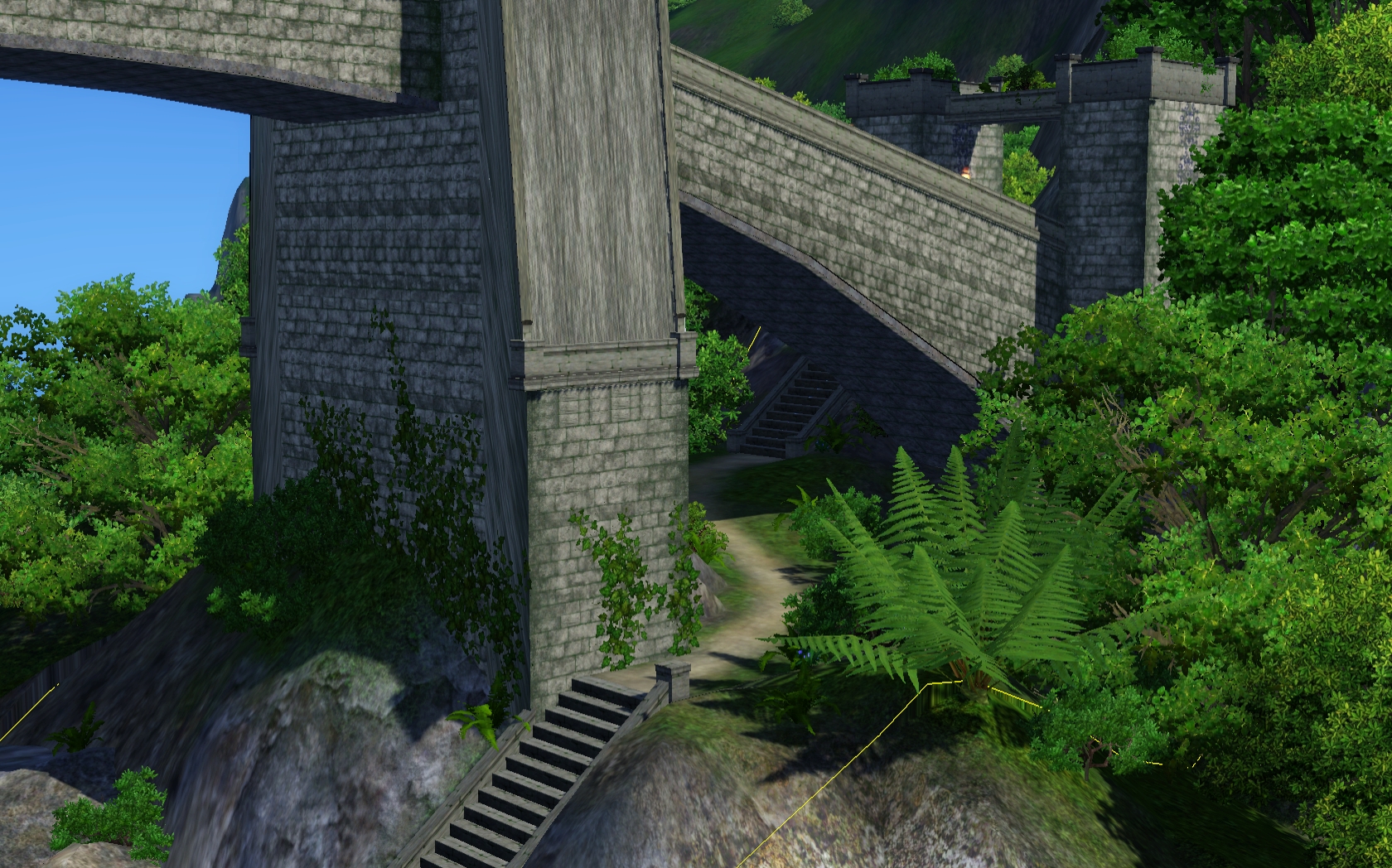 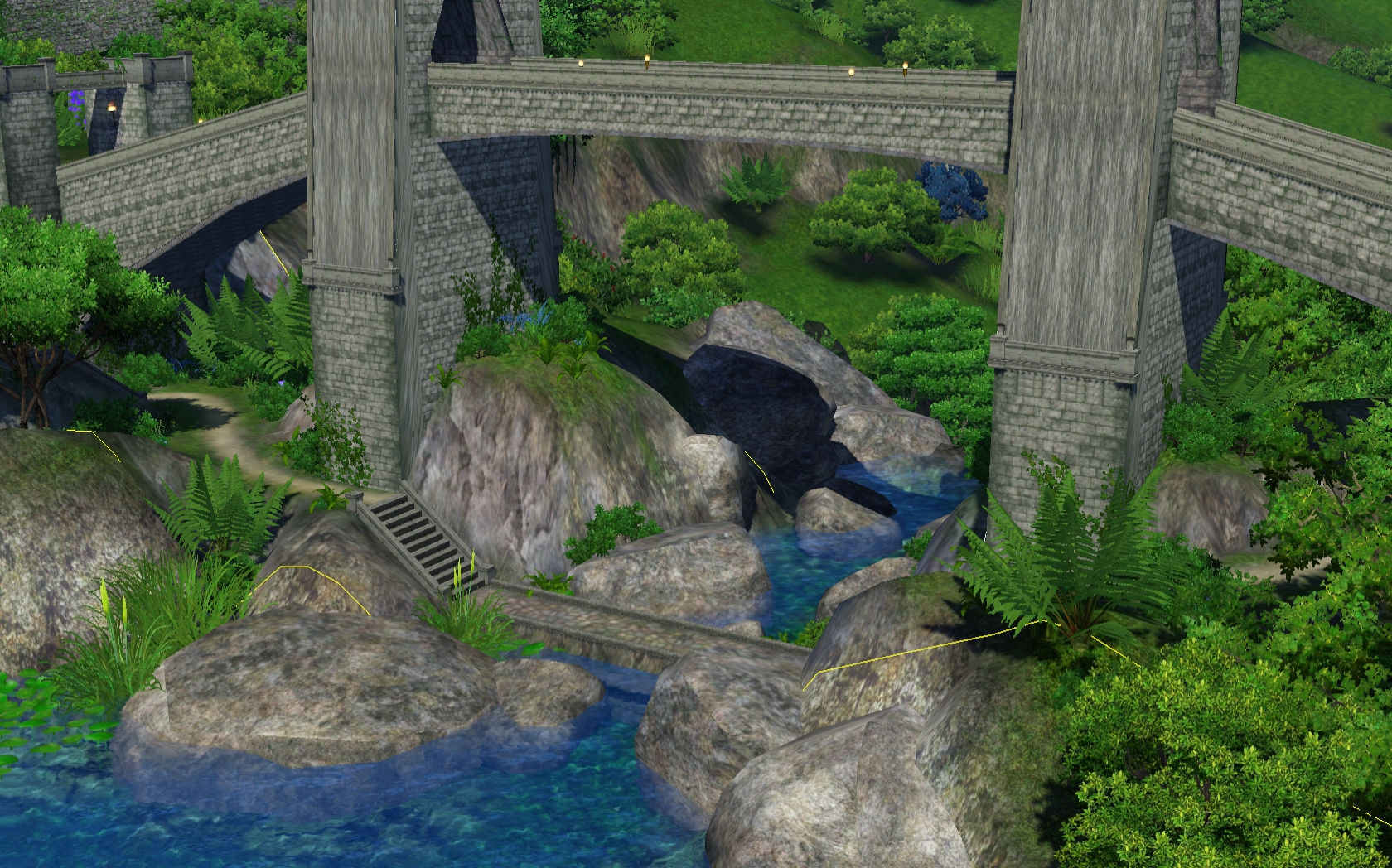 I couldn't get rid of this bridge, it's too iconic. Instead, I've added an alternative pass underneath, which is what sims will use to cross by default, unless you make them walk across the actual bridge.

3. The hanging bridge to the Moon Monastery: 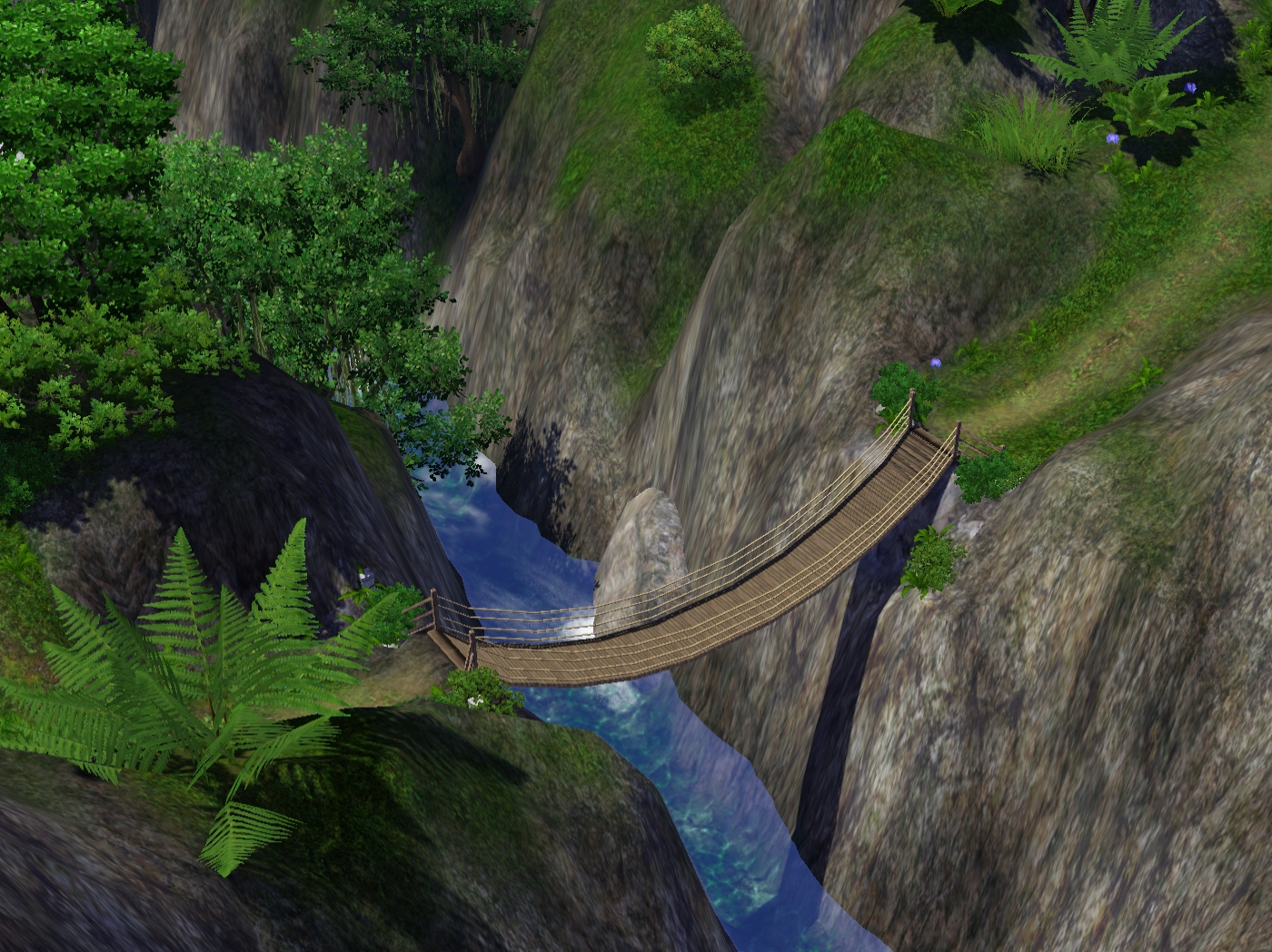 AFTER
I loved this bridge, but it would've caused problems, so here's a new one.

Looks very good ! And the small bridge under the big one is very clever.
daisylee

Looks good and I also love how the path was done under the main bridge. That hanging one was so cool but I can see how it would not function well. Thank you for the update.
daisylee

Whoa! This has been a long time. Hope all is going well for you and this still will be coming someday.
daisylee

Getting worried now. Anyone heard from Nilxis? Hope all is OK.
veronicaLaw
Test Subject
#516

Honestly, Windows 11 is more likely to reach end of life before there's any update on this
Nilxis

Hey! I'm alive!
There are no updates I can show so far, I've built some lots in secret areas and I've started working on the routing, so I'm still working on Uranesia but it's also true that lately I've been very slow

Thanks for checking up on the project, I understand why you worry!
I hope I can show something new sooner than later.
Find all my creations here:
My blog: Nilxis Designs // My Tumblr page: http://nilxis.tumblr.com
Eca

I don't know about them, but I can wait for 10 years more.
Add me on TheSims3.com to exchange in-game gifts! ^^
daisylee

SO glad to hear from you as I was getting worried. We all are busy now but hope you pop in now and then even when no updates just to say hello.

I can't believe I just found out about this project today! It's been a real treat catching up on everything you've done and I've really never seen anything quite like it.. I love the look of the sims! I don't think I've seen a world that had its own fictional ethnicity and distinct look accompanying it. AND I have to say I'm super intrigued about the challenge you're working on and what it'll look like; as I've gotten older I've found I don't do well with being plopped down into a sandbox and forced to make my own story, so I love that there's actual worldbuilding to discover... It's incredibly ambitious and I'll never know how you CAW folks do it but I'm hyped

! It blows me away that you've remained loyal to this project for such a long time, I can't imagine the skill and dedication involved to undertake something like this. Thanks for sharing your creativity with all of us!
Back to top