Creating a mod to re-organize social interactions?
I'm completely inexperienced with modding Sims 4 (I've successfully made a default mesh edit one time and I've made at least 6 failed 4t2 clothing conversions, for reference). I want to know if there is a way to make a mod that rearranges the social interaction options. Specifically, what I want to do is sort the various interactions into their own sub-pie menus, sort of like how you can click "Declare Weather Preference" and then get brought into another pie menu. I don't know how to explain exactly what I mean, but I made a really rough mockup of my idea:

(Please note this is by no means final, if the idea is feasible I'm going to document every interaction in the game and sort them from there. Feedback is nonetheless appreciated)
I have next to nothing as far as coding experience goes, however I think that this *might* be possible to pull off. If anyone who knows more than me could give some input or at least point me in the right direction, I'd appreciate it a ton. Also, if anyone else has made a mod like this already, please let me know.
Thanks!!
Advertisement
baniduhaine

Generally, you could probably pull it off by copying and overriding the interactions (which for the record, would make it incompatible with other mods that override the same resources). Cloning them would allow you to recategorize them without overriding, but leave the originals (unless you suppress them, but that'd probably be too much of a round-about way to handle it, so probably ignore that I said that lol).

In any case, there are two things you'll need to focus, at least as far as basics go. The following examples are from what I'm viewing on Sims4Studio.

Some interactions have a category under which they'll show. For example, your weather example. 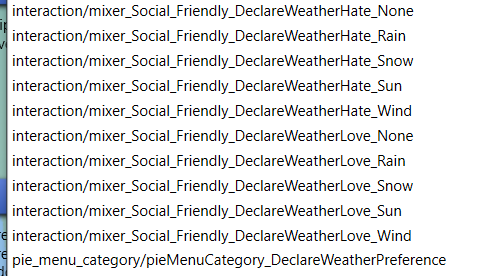 Let's look at mixer_Social_Friendly_DeclareWeatherLove_Wind. If you scroll down to category, you can see where it falls under.

Let's look at that category then.

It has a parent. That means WeatherLove is under DeclareWeatherPreference. And is declaring weather preference under another one?

1. Change which category each interaction is under.
2. Change or remove the parent of pre-existing categories you want to move.

The second is less prone to conflict in my opinion, but won't always be an option, if for example the interaction was simply inside sim_Friendly.

You can also create custom categories, for the record, either by cloning another one and changing things on both its tuning and SimData (that component is necessary), or making one from scratch. Technically you can edit SimData manually but it's easier to paste your Tuning into LOT51's TDESC BROWSER and clicking download SimData, saves you the headache lol.

I hope I explained well enough, but if you need anything else or if that didn't address what you meant, by all means let me know and I'll try to answer as soon as I can.
SheepishNudist
Test Subject
#3

Might be worth noting there’s already two mods that reorganize the friendly menu; Kuttoe makes Ask Category (exactly as described in your screenshot) and Carl has this as a similar feature in Gameplay Overhaul. Kuttoe also makes “Better Vampire Menus”.
andiberlin
Lab Assistant

Hi. The problem is also partially solved in my Better Pie Menu mod. I want to keep improving it in that direction.
Download & Info : https://andirz.itch.io/better-pie-menu
Simmiller