Hi there! You are currently browsing as a guest. Why not create an account? Then you get less ads, can thank creators, post feedback, keep a list of your favourites, and more!
Quick Reply Print version
Search this Thread
Replies: 175 (Who?), Viewed: 81032 times.
Page 1 of 8
toxi

The ISBI challenge - I'm Surrounded By Idiots!
First off, I did not create this challenge, it is 10 years old, as far as I know. But I've been missing a thread about it, so here it is:

A newer rule set by me, which takes more expansions & pets into account. - new

In short, this is a 10 generation challenge. You control one insane sim in the household. The torch is passed to the heir when she/he reaches YA. This sim must be insane as well. When the new heir takes over, the last heir becomes uncontrollable.

For extra insanity, add the wishacy rules for your torch-holder, if you like.

OK, not a staggering amount of ISBIs around on MTS, it seems. I have seen a few floating about on wordpress & tumblr though. I think @Nirar22 had one, if you care to join the thread?

Something happened in my ISBI that hasn't ever happened to me before in TS3: an earthquake!! The whole screen was shaking! I didn't even know they existed. I've had meteors, but never an earthquake.

2.1 - Someone got himself a silly hat

I'm playing an ISBI as well. There are some very interesting things that can happen when you leave a sim to themselves!

As for your earthquake, I've only ever had that happen when my sim is a firefighter. I didn't know it could happen regularly! XD
toxi

Hi & welcome to the thread!

More interesting than I would have guessed actually. I've seen a few things I have never seen before in Sims, and I thought I had seen it all...

Ah, so it's the firefighter profession that does it. I don't think it can happen regularly, or at least I've never experienced it. But it actually happened once again after the first one, just a few days after.
Absolutely Cuckoo - I'm Surrounded By Idiots
Pollard - a Boolprop EPIC challenge
EmmiGator
Test Subject
#5

Hey Toxi i looked that up for you cus it sounded interesting
http://sims.wikia.com/wiki/Earthquake
toxi

Thank you, @EmmiGator! I wish I knew if they can occur if you don't have a firefighter in your household, though. It doesn't seem very clear to me.
Absolutely Cuckoo - I'm Surrounded By Idiots
Pollard - a Boolprop EPIC challenge
KyrieKaimei

Yeah that is weird. Maybe its a glitch? Who knows, but thats kinda scary! Who knows though.
I kinda wish it would happen in my game. I don't think I ever even had it happen, when I had a firefighter sim in my household.
toxi

Well, I have an update! Share yours too. *not so subtle hint*

Lol okay! Well I meant to post it in this thread like Friday, but I updated my own ISBI:

@toxi---sorry, I am terrible about looking in the upper corner, lol *hides* I have bookmarked your ISBI story (I notice it's mixed in with the Coronas, *makes mental note to check and see if I am up to date on them*), and the others, I'll read them as soon as I am able.

I've had the earthquake a couple of times, but it's been a while. I played through the ambitions style careers once, but rarely use them now. I just want to send my sims to work and forget about them for a while, haha!

I wonder if Debugenabler allows you to call up an earthquake, like it lets you call down a meteor?

I actually have 2 current ISBI stories/challenges that I am working on. One, the Pop ISBI that I started fairly recently, and haven't made it very far yet, lol I used the Do It As You Go random roller to help me make my founders though, to add a little fun to it. I'm a little farther on my Full of Beans challenge. It's a combo one though. I am doing an ISBI, Perfect Genetics, and because I am crazy--Midnight Sun, lol Which basically means they have kids until they get one with perfect genetics, no matter how many kids it takes, and the kids are not allowed to move out of the house. Ever. Unless they die, lol :p
Nirar's Nest: My TS3 Stories, Sims, and Builds hosted by TFM's Sims Asylum
You must be registered to view the site. :)

My torch holder is being driven crazy by his children! I feel so bad for the poor guy

I have one too.

2.3 - What do I care if icicles form? I've got my love to keep me warm.
Absolutely Cuckoo - I'm Surrounded By Idiots
Pollard - a Boolprop EPIC challenge
KyrieKaimei

Maybe we can get more people into this. I like to take my spouses from other games. I think it makes the game more interesting. Also Toxi, I just remembered to finally follow yours! :D
slave_zombie_student
Lab Assistant
#14

well after the fiasco that was Sims 4 i decided to return to 3 and 2 and the only fun i have with 3 to tell the truth is: CHALLENGES. 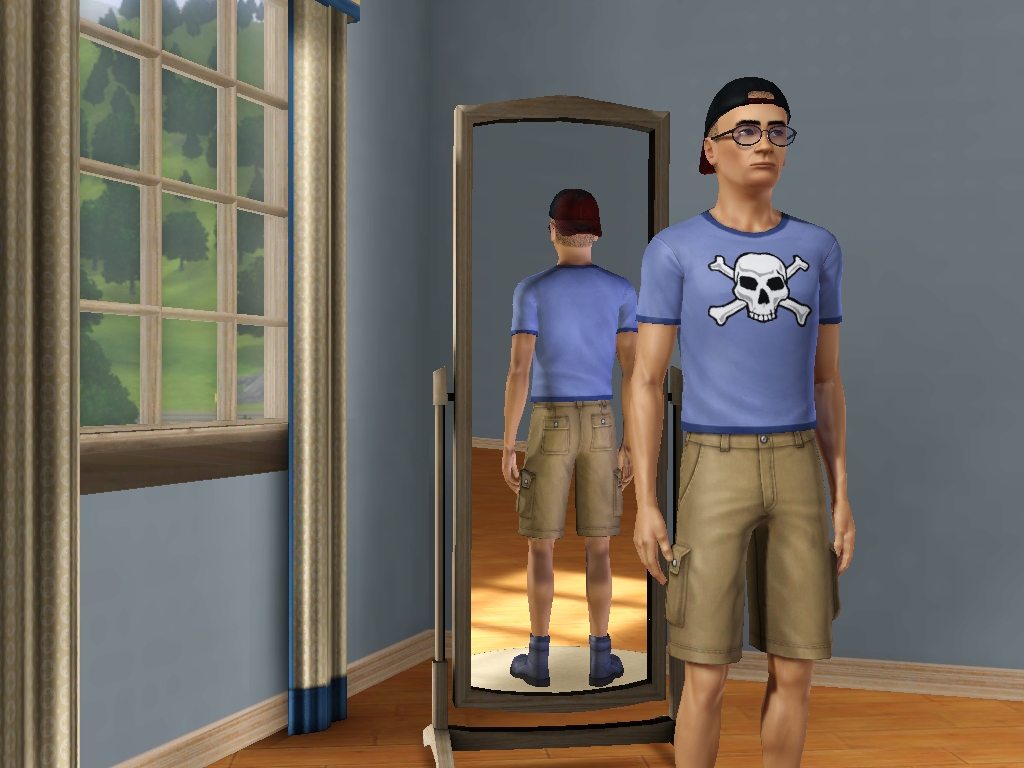 Yep i did roll an insane at first 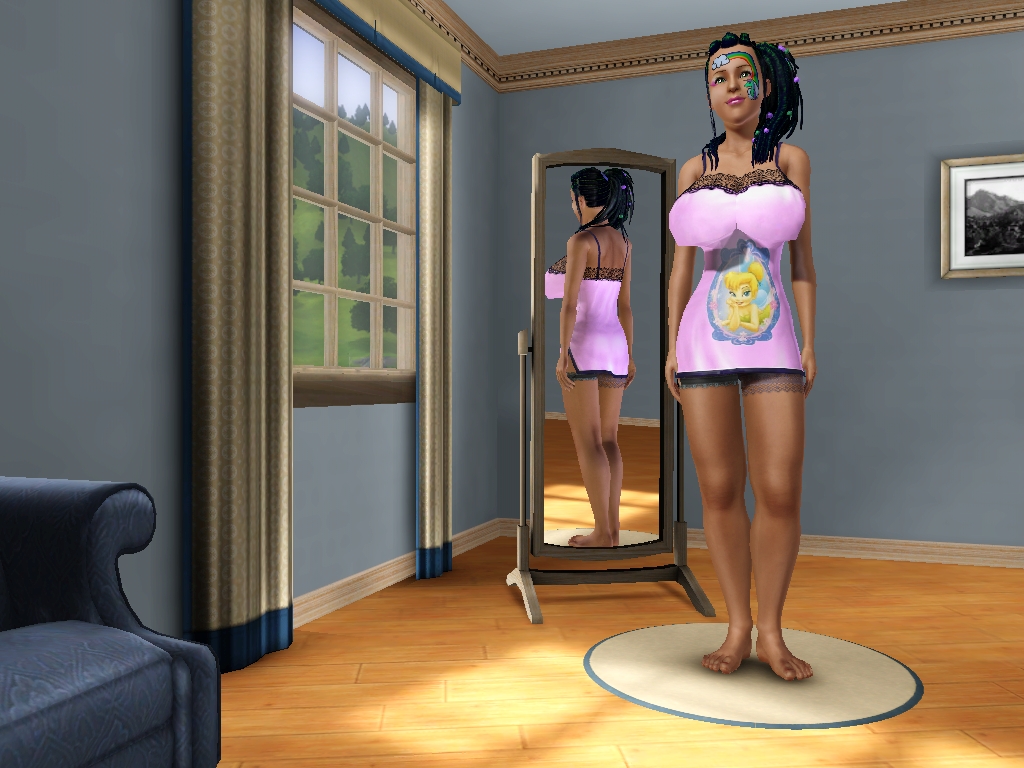 the first thing i did was choosing a neiborhood, i used sims 3 veronaville (WA version) but altered it a bit to make this harder:
Deleted school and switched it for art campus
added both a robot emporium and a robot arena... not like i'm going to use them but want to see if plumbots do spawn in present
and added some extra houses... now i just choose "your grandma" as starter home... guess what? CHALLENGE BUGS!
Our cuckolander Tara (the torchbearer, her name sounds like torch so...) didn't mind removing her nylons to stomp those roaches.... ewww. And there is this huge insect that appeared from nowhere, well let's kill it. nothing personal, i always kill the school mascot as soon as it shows off... i hate it, it's invasive and creepy (nothing against school though, but a llama guy/girl almost conscripting you for university and acting like those zealots that wake you up at 7 am on saturdays is not cool), well as soon as i started i tried for baby and is a 3/4 chance to get one, Tara got pregnant and 1 day latter one thief appeared... this usually doesn't happen but it did.... obviously it was a failure delivery, good thing traits were not that bad: Disciplined and Easylly impressed... however the toddler must had to be raised perfectly in order to not fail the challenge... huge success. Those traits desserved a cruel name though: RINOCECARLO Still this is not going to be the torch bearer ,,, middle child will be in all cases so it's time to get her pregnant again:
Tara now delivered a cute girl i called Luna (Lovegood?) no idea if she is going to inherit her crazy mom's hair color... this time i didn't had any debuffers like last one, no thieves neither killing university mascots so i could choose her two traits:
loves the outdoors
insane for now it's all maybe i will update next week
toxi

Tatas for days! Seems you had an eventful few days in you ISBI. But it was funny to read! Can't wait to see an update :D
oxJennxo

Nirar mentioned mine above *waves*, so I will put in a link.

@Jenn: Oh my goodness he's beautiful! I think I just started reading yours the other day. I believe I may look a spouse for one of my generations among your beautiful Sims! Actually I want spouses from all of you ;o; I love taking my spouses from other games. It makes it more interesting I think
oxJennxo

Aww thanks! Even if I don't use other peoples sims, I do like having them around in town. PB's two cousins and 5 siblings all just started a Tart AU. A lot more work for me, but at least I have a lot of stuff to do if I get bored with other things.

I bookmarked yours and I am hopefully going to do some reading today.
Jenn's Junkyard
Tart ISBI - Completed
WYDC Rules
Shademoor BACC - Completed
slave_zombie_student
Lab Assistant
#20

well also got a thief in the next day so i was not THAT lucky in the end, waiting for next sunday, this proved to be an interesting challenge... just cheated anyways, the Adult/Young Adult couple with both crazy traits was giving a lot of WTF moments (even though most of them were "play tag in order to reach stove/fridge/whatever to not die cause the other sim is talking with himself) just hope that that middle child has the "crazy hair color" of her mother would be a shame to lose it.

About the sliders i wished i also had a Butt slider in vanilla Sims3 CAS, but there is only breast one... or a feet one so the poor Tara could walk normally without fear of falling from front

I decided to give this a shot, though I doubt I'll play for a full 10 generations (my computer can barely run TS3, my save files get bloated and unplayable within 2 generations). Meet Zackary Hale, the randomly generated Sim who popped into existence when I opened CAS. He's Socially Awkward, Ambitious, Proper, Neat, and Insane, and he aspires to be a Jack of All Trades. Gentlemen, start your engines, it's about to go down.
http://i.imgur.com/v2TeAn5.jpg?1
"If I be waspish, best beware my sting."
oxJennxo

I did manage to get one up today. I am writing up the last one for this generation, but I'm not sure when I will post it.

I was going to hold it for a few days, but then I started playing Generation 7 and decided to just post it.
Jenn's Junkyard
Tart ISBI - Completed
WYDC Rules
Shademoor BACC - Completed
slave_zombie_student
Lab Assistant
#24

I lost pictures but still did stuff, third child resulted in twins (non identical) this ruins the middle child as bearer since there are 4 children (half != middle) so i did a cointoss to see who will be the torch bearer between the two girls (because the middle children was a girl) and the youngest one won... that's not at all: the one with the clown shoes is the new torch bearer due this cointoss hope in next generations I get only normal deliverings
seems the bug plague returned, so let's kill that huge roach: sadly killing roaches is a crime these days: Oh also Leo passed from old age, this is due in my settings adults and young adults get aged after 21 days Look at all these updates, that's brilliant! I have one too: 2.4 - I put my trousers on, have a cup of tea and think about leaving the house.
Absolutely Cuckoo - I'm Surrounded By Idiots
Pollard - a Boolprop EPIC challenge
Back to top