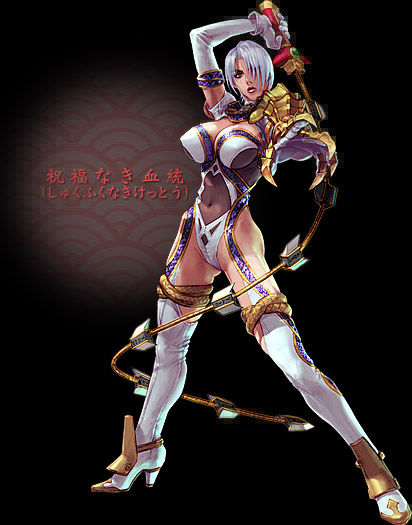 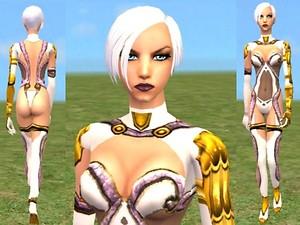 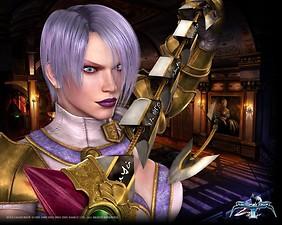 274 Thanks  Thanks     15 Favourited
Hello everyone, it's been a while. As pro gamers realized, November is THE month for picking up games. I personally picked up a few, such as Dragon Quest VIII, Fatal Frame 3, and of course; Soul Calibur 3. Now, in Soul Calibur 3 there are many, many cool characters (minus Zasalamel, he's good to use, but what kinda character design is that?!), and Ivy is probably the coolest among all of them. She's daughter of the infamous(:P) Lord Valentine of London. However her father was obsessed with an evil sword called "Soul Edge", and ruined the family in the prosess of pursuing it. Later on he died, and soon after his wife followed. On her death bed she told Isabella that the Valentines weren't her real parents, her real father is a man named Cervantes. Isabella was extremely upset and seeked for Soul Edge for vengence. I Personally think Ivy is the best character in Soul Calibur series. She's the only character who can control the fight at any range (other than Link from Soul Calibur 2 Game Cube edition, but he isn't really a Soul Calibur character), she has some of the best juggles, and THE strongest throw. On top of that she's also the hottest lady (go a head, flame me =P), so if you ever felt like trying out Soul Calibur, give her a try!

This project took me 9 straight hours to make, the difficulty was beyond my expectation. I'm still not really satisfied with the result, after all, her armor pieces still look uncomfortable. Half way through I realized I shoulda done her Soul Calibur 2 costume, it would have been much easier. But, what's done is done, if anyone have any tips or pointers please don't hesitate to share. Anyways, the following download is not optional, I used Amy's body mesh for Ivy's clothing, you can find it here
http://www.modthesims2.com/showthread.php?t=44178
For those who doe not wish to install every single mesh in that .zip file. The file I used is called "adultnudehighheels".
The rest of the custom contents are all made by me, that includes eye color, skin, clothing, hair, and face model. To the people who DOES NOT have any expansions, use Clean Installer to install Ivy. Here's the link to the program.
http://sims2pack.modthesims2.com/index.php?page=3

Alrighty then hope everyone enjoys this upload, and have fun