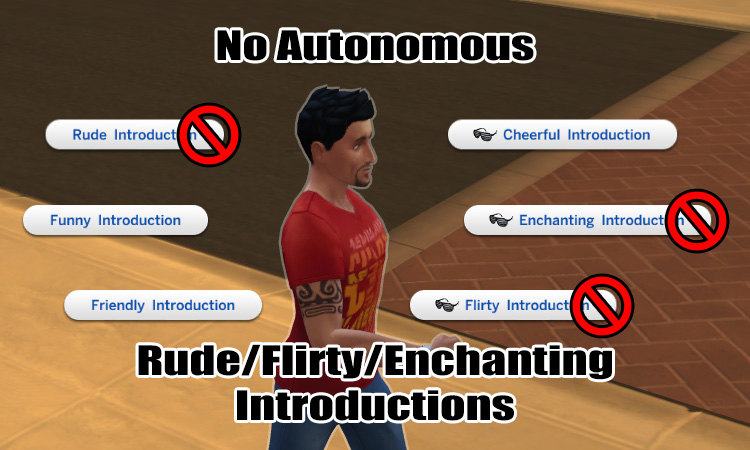 
I have no idea why my sim with Good trait still tends to be rude when greeting to others.
And flirty greeting is another problem also annoys me. So I made this mod to turn off the autonomy for them.
Be nice and proper to the strangers, please.

Also...What on earth is Hilarious Icebreaker? I cannot make sense of it.
And this introduction lasts longer than others, so let's just shup down its autonomy.


Actually I was thinking to shut down all the autonomous introductions.
But soon I found the strangers would never talk to each other in that case.
Okay, well, greetings are really important. Just...keep your manners in mind.

Mod Effects
Stop the autonomous Hilarious Icebreaker/Rude/Flirty/Enchanting self-introductions, but you still could direct your sim to do so.

Compatibility
Based on Game Version 1.93.129, INCOMPATIBLE with previous patches.

Conflicts
This mod edits these files, will conflict with any other mod does the same.

Install
This is a non-script mod. Unzip and place the package file in the Mods folder.

– No Autonomy : Mods to remove or reduce autonomous behaviours
Tags